Chris is making us a Belgian tripel, one of my most favorite styles, so to return the favor I made him Pecorino Romano crisps, opened him a Snow Drop and helped him with the mash tun. Then I had a 3 Golden Hairs.

I like making these crisps (today with rosemary and hot honey) because they require close to zero effort and deliver one hundred percent crispy, cheesy satisfaction.

Let me tell you about Snow Drop and 3 Golden Hairs first. They are very similar overall, but I can never make up my mind as to which one I prefer. It has been three years now and I am still not sure. Kind of a “the best beer is the one in front of me” situation.

Both of them are crisp and refreshing and both are brewed by Grimm Brothers Brewhouse in Loveland, CO – not too far from our house. Before we could purchase cans we frequently went to the Grimm Brothers taproom to get growlers. As the brewery’s name suggests, they make beers modeled after the traditional German and European styles, but are not shy to modernize old recipes and introduce popular American hops.

3 Golden Hairs is a Bohemian style Pilsner with ABV 4.6% and IBU 40. It is brewed with Pilsner malt and Saaz noble hops, hence it is very true to the roots of this style originally brewed in Pilsen (in today’s Czech Republic). It is darker in color than Snow Drop.

Otherwise both pour with fine and persistent effervescence and retain fine white heads. What I love most about 3 Golden Hairs is the unmistakable flavor of the noble hops – slightly spicy, herbal with a refreshing bitterness. It most enthusiastically agrees with a cheese like Pecorino Romano, and the addition of hot honey and rosemary to the flavor mix is simply genius, if I say so myself.

On the other hand, Snow Drop. What a beer. It is actually a Kottbusser ale that drinks very much like a lager – fermented with a very clean ale yeast, then lagered after fermentation is complete.

Malted wheat is added to the grain bill and also some honey and molasses. Tastefully, but resulting in an ABV of 7.1%. Even though IBU is only 10, there is a pronounced muted bitterness from the same noble hops.

Mince the fresh rosemary very, very fine and use your favorite hot honey. Ours is Mike’s, even though we have never met the man, he lives on the East Coast.

Once you grate the cheese, mix it well with the minced rosemary and create small heaps with the mix onto a parchment paper or Silpat lined baking sheet. A half a pound wedge can yield anywhere between 18 and 22 crisps, depending on how big the heaps are. If you want thicker, cheesier crisps, make bigger heaps (1 and 1/2 tbsp). If you want really thin and crunchy crisps, make smaller heaps, about 1 tbsp each, but also keep in the 400°F oven for less time so you do not burn them. If you know your oven to be too hot, try 375°F instead.

Once you let them cool off a little bit, drizzle the hot honey and have your beer at the ready. These make the perfect pairing for Pilsners! 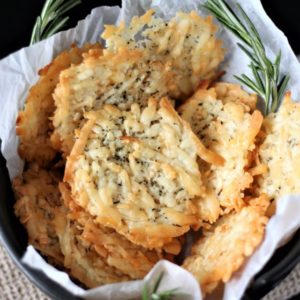 If you enjoyed spending time on Craft Beering we sincerely invite you to join us on Instagram, Facebook, & Pinterest or enter your e-mail in the subscription box below (we’ll send you a list of all new posts every two weeks).