Steckerlfisch is a grilled fish on a stick immensely popular in Bavaria and Austria. It is an iconic beer garden menu food item and many know it as Oktoberfest fish on a stick because it is one of the best loved specialties offered on the Wiesn every year. 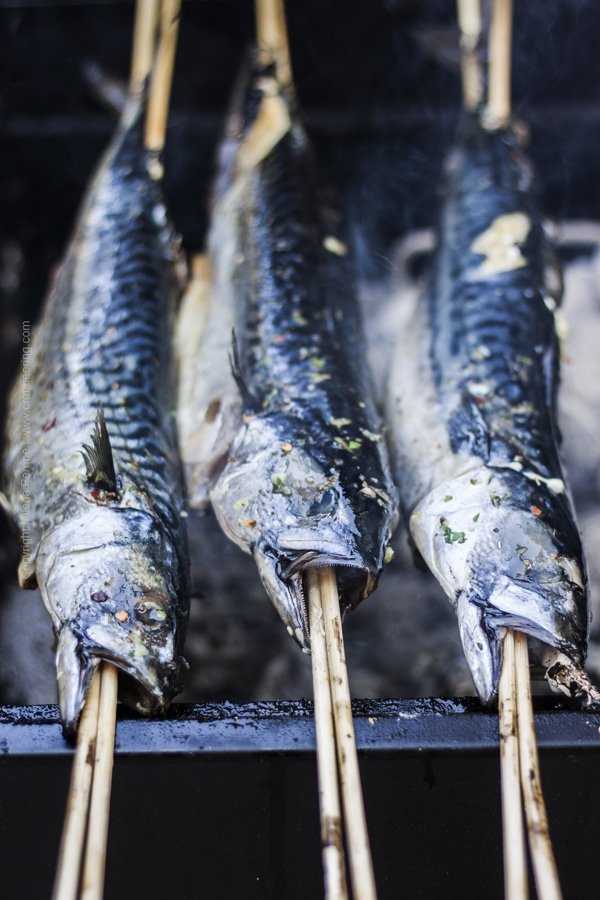 Steckerlfisch captivates with its delicious smell, has incredible affinity for Bavarian and Austrian lagers and its flavor is sooo addictive you will not rest until you are staring at a head, bones and a tail. Tried and true.

Read about our very first personal experience enjoying fish on a stick at the Salzburg St. Rupert’s fest at the end of the post if you are interested.

Steckerlfisch is a grilled fish on a stick. In Bavarian dialect the word ‘Steckerl’ means little pole or stick.

A whole fish, gutted and cleaned is threaded onto a thick, angular shaped stick and suspended over hot embers to cook. Typically, the suspension is at an angle with the head of the fish closer to the embers and the tail slightly higher.

Often times the fish are horizontally suspended over the wood charcoals and sometimes the grills are constructed in such a ways as to incorporate both diagonal and horizontal suspension as seen below.

The heat from the embers cooks the fish and the aromas wafting from around a steckerlfisch grill are ridiculously tantalizing.

If you enjoy fish it is virtually impossible to pass on steckerlfisch. 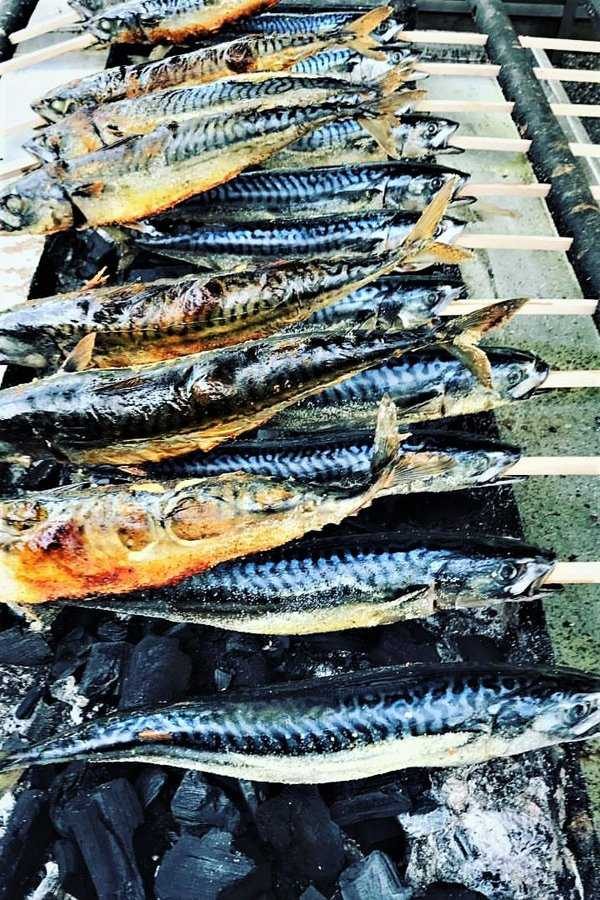 Obviously the real history of fish on a stick begins the instant our earliest predecessors adopted cooking over fire and hot embers. In terms of organized mass preparation of Steckerlfisch for the singular purpose of enjoying it with a cold beer – it all began around 1902.

The lakes and rivers of Bavaria provided a lot of fresh fish and beer halls and gardens began to cook the fish hunter style and serve it to their patrons. They began using especially constructed grills filled with wood embers and slots to suspend the fish.

Initially trout and fresh water whitefish were used. Refrigeration and better transportation made salt water fish such as mackerel and char available and today mackerel is the most commonly prepared steckerlfisch. 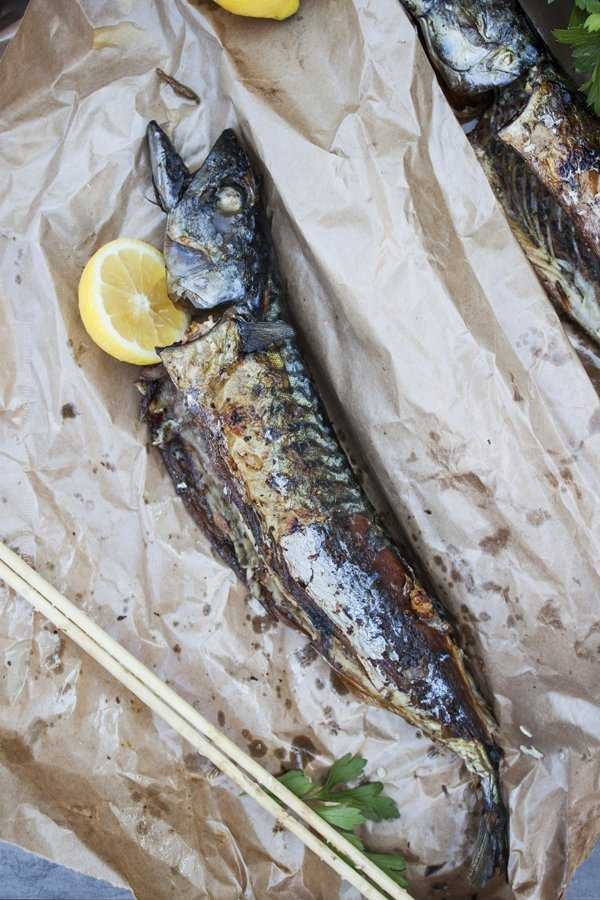 What you will Need

Everything about making fish on a stick proved quite easy except for actually finding the stick!

The traditional sticks used in Bavaria have an angular square profile and are quite sturdy. The angular shape facilitates positioning the fish over the embers. In the earliest days willow branches of appropriate thickness were used, neatly trimmed with a knife.

If you can fashion your own sticks – do it. They need to be about 30 inches long and sharpened on one side so you can easily push the pointy end through the flesh of the fish, just above and along the spine.

Otherwise consider smores/grilling sticks – the sturdier the better. We ended up using two smores skewers per fish because they were on the thin side while the fish were almost 3 pounds each. An added inconvenience was the rounded shape as it made it more difficult to position the fish, but eventually we got the hang of it. 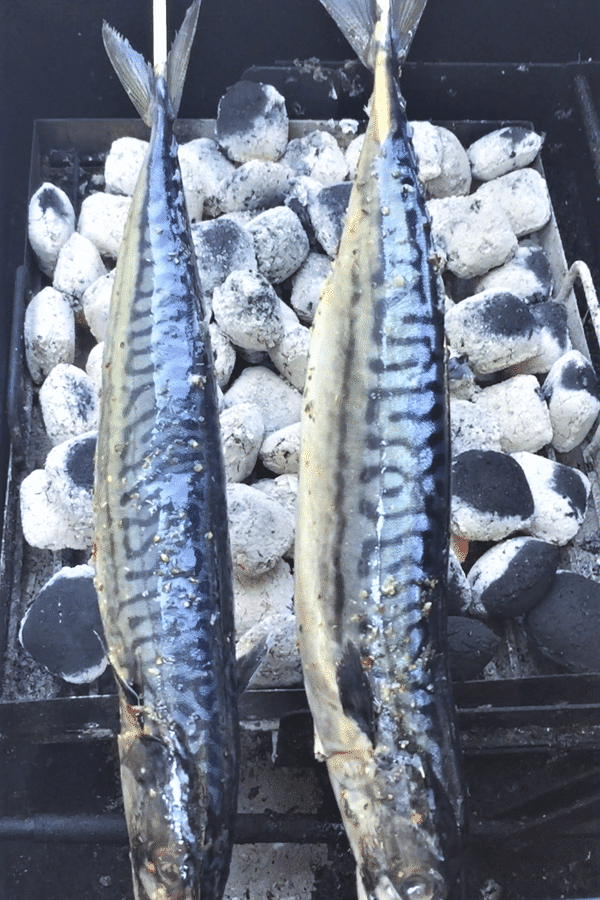 You will also need to prepare charcoal briquettes to white embers. Use a chimney starter for best results and follow the manufacturer’s instructions.

Use a charcoal burning grill or a wood burning fire pit that you can position and mount the sticks around. The radiant heat from the embers will cook the fish. The embers should not be smoking. Wait until they stop smoking and place the fish.

Overall – be resourceful and enjoy yourself. Grilling fish on a stick and eating it out of paper is meant to be fun. Follow the steps outlined in the recipe below.

Both methods described in this recipe are quite popular.

If you are having trouble skewering the fish you can use thin wire to secure them to the grilling sticks.

Two Ways to Suspend the Fish Over Charcoals

At fests and in beer gardens it is very typical to stand up the sticks with the fish on diagonally over the embers, as in the pictures above. The head is always situated closer to the embers as there is more meat in that area while the tail end has less and will cook faster.

Very often the fish are positioned horizontally. We were able to do both ways on our gas/charcoal grill and smoker combo, but the horizontal way proved easier for rotating the fish in the absence of a square stick. If your grill has an adjustable firebox use it to adjust the height of the fish over the embers. About 12 to 16 inches is recommended based on how big the fish are.

As noted in the recipe – grill the backs of the fish first, then the sides and finally the belly (because it cooks the fastest). 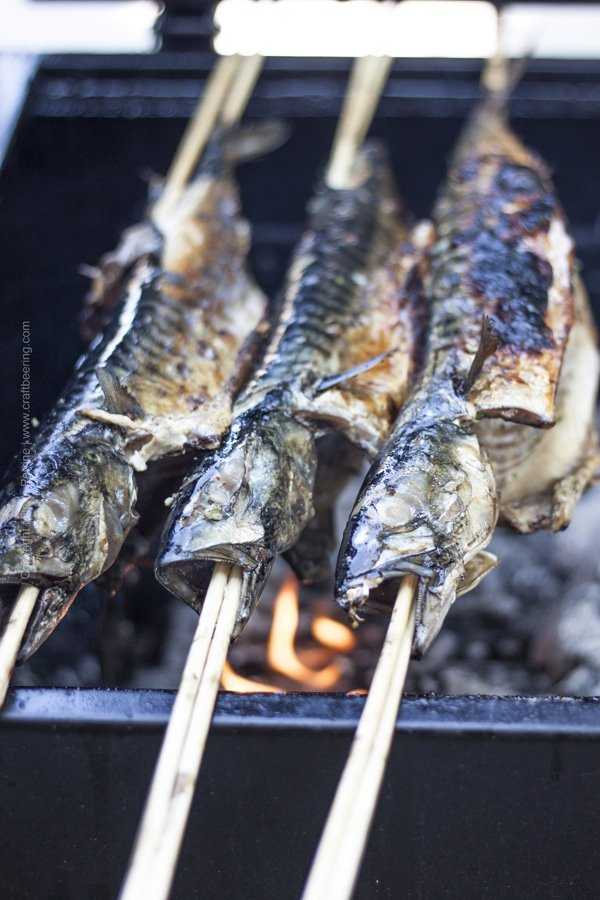 How to Serve Fish on a Stick

Typically the cooked fish is removed from the stick, wrapped up in paper and handed to the patron. Sometimes in the more civilized setting of beer halls steckerlfisch is plated and served with lemon wedges and a soft Bavarian pretzel.

So – yes, you can eat the fish with fork and knife but it is truly meant to be finger food. The most enjoyable part of the experience (besides the flavor) is the fact that you get to tear pieces of the aromatic, tasty flesh and literally lick your fingers after you eat them. If you ask us this is definitely the way to go.

For something as simple as grilling a fish on a stick we were astounded to encounter so many different opinions, tips and tricks. I suspect this is what happens when a food item is so well loved.

After researching approximately four thousand Bavarian and Austrian recipes, watching a similar number of cooking videos and reading copious amounts of comments by actual Germans and Austrians we were able to identify several key topics subject to (sometimes heated) debate and I am summarizing them here. 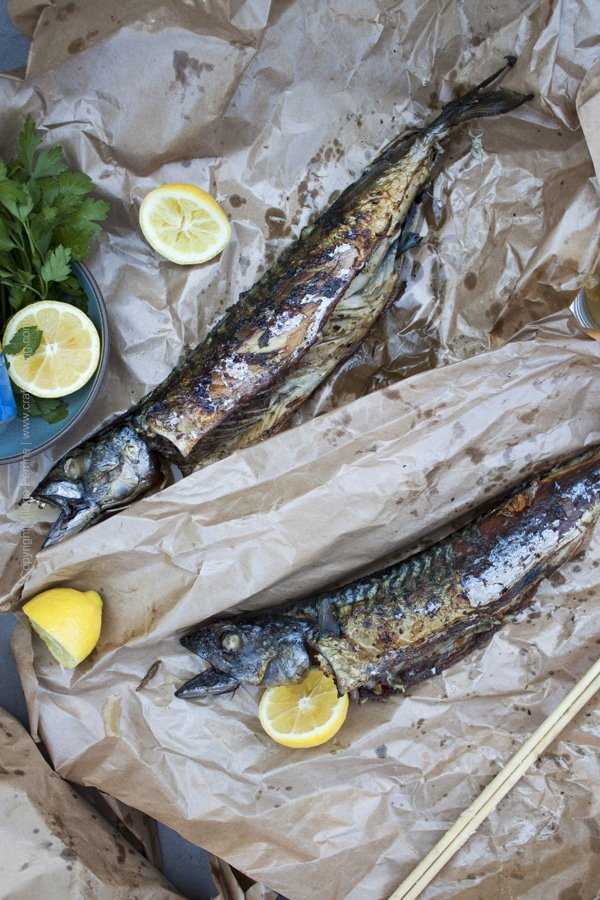 Where to Get the Fish

Don’t laugh. It really wasn’t the easiest thing to find the right fish in a smaller town in landlocked Colorado, despite the fact that we actually have tons of trout in the mountain lakes and rivers of the state and that Chris is a fly fisherman.

Farm raised trout is too small. Catching three (that was our magic number) uniformly sized large trout on the same day didn’t work out for Chris. He caught a rainbow that was too small, one large brown and a whitefish that was way too big. They were all released back into the Poudre River.

So we decided to buy mackerel. Except not even Whole Foods had it. We drove to an Asian market an hour away and found Norwegian mackerel. So if you do not live by the water and there is an Asian market near where you live – go there first. The price per pound was exactly three times less than what Whole Foods charges (when they have mackerel). 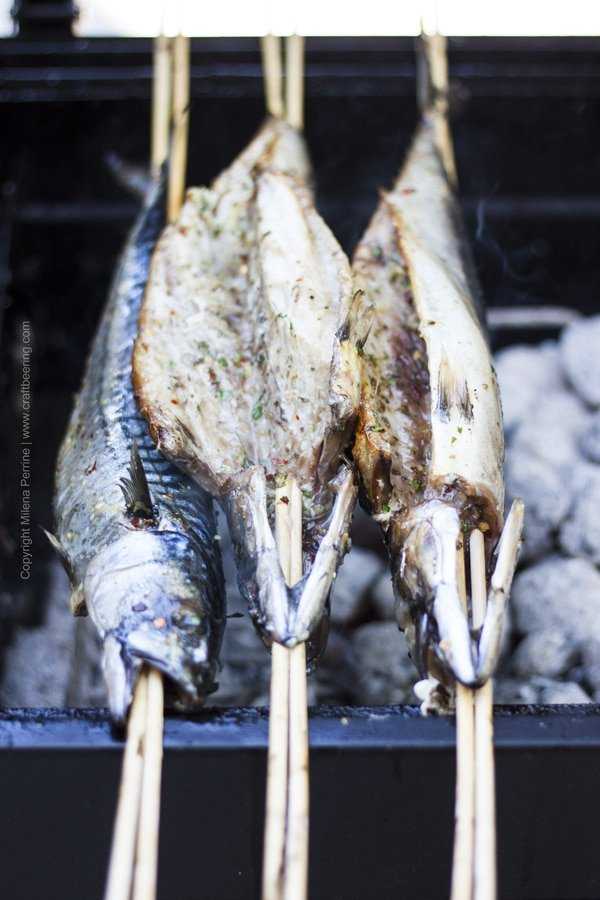 We hope to have convinced you to grill some tasty Oktoberfest fish on a stick. Here is how we got hooked on it.

Once upon a time Chris and I were driving around Austria without any concrete purpose other than to see, taste and experience as much as we could. We stayed in Vienna, in small villages through the countryside and by beautiful lakes in the Alps. If you’d like to see a beautiful, clean and ultra organized country with rich history – visit Austria.

One day we ended up near Salzburg and since neither one of us had been there decided to stay for a few days. We spent the first five hours after we drove into the city looking for a place to stay. It was the first day of St. Rupert’s fair we were told, a major local festival in honor of the saint who founded the city. In the old days as soon as you built a church you could establish a city and this man Rupert did exactly that and was later on canonized.

Finding accommodation in the Old Town was out of the question. So we strolled around the part of the new town nearest the river and the Old Town and even though there were tons of hotels all that we could find were penthouse suites for a gazillion euro per night and with three night minimums. In our desperation we almost agreed to one but since we were at the end of our month long trip our savings had dwindled.

We decided to look just a bit longer… and miraculously walked into an NH hotel where there had just been a cancellation! Four nights for an actually reasonable rate and within walking distance of the main bridge to Old Town. Boy did we celebrate with a great dinner and Schnapsen at a fair stall with a spirited Austrian couple we met as our guides. 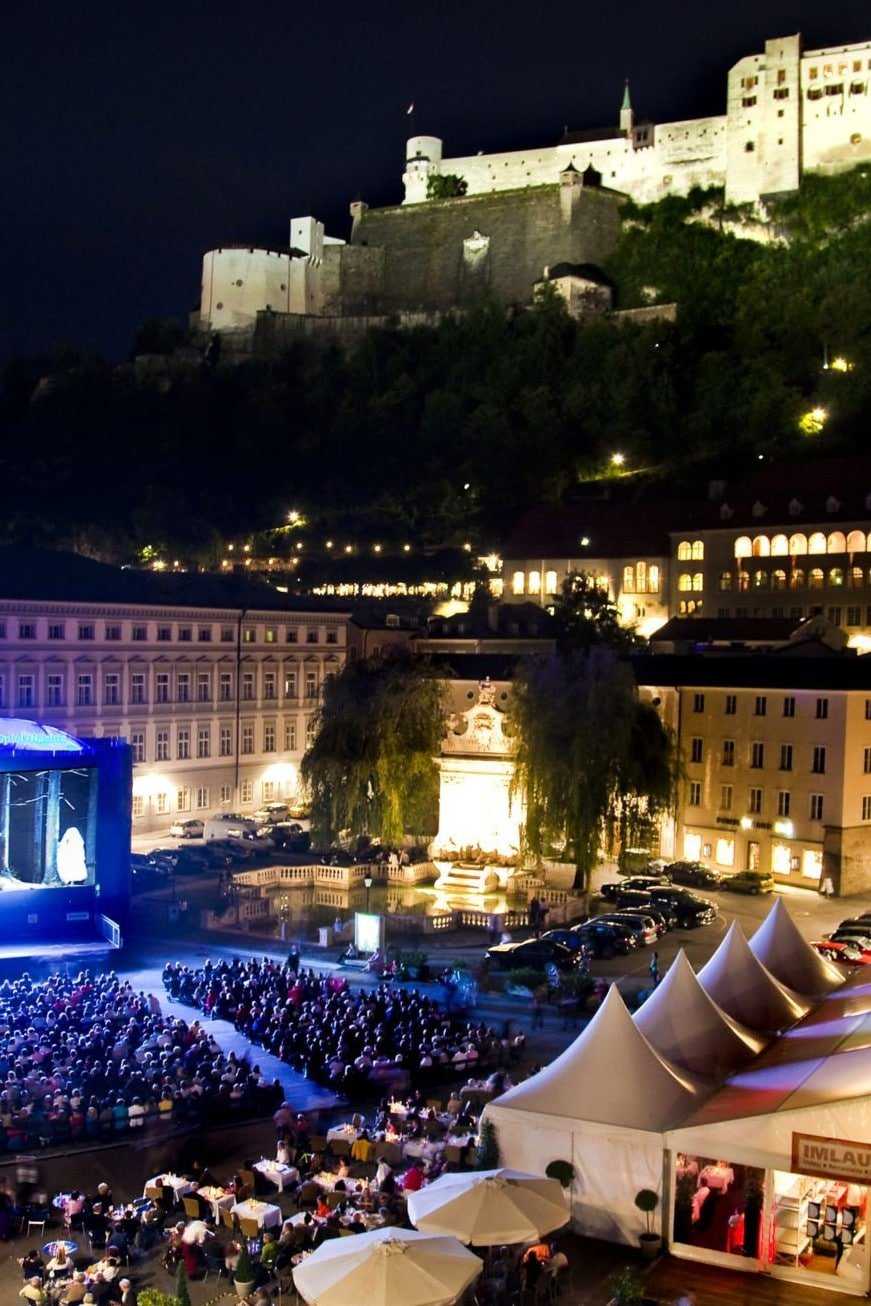 St. Rupert’s fair is a spectacular festival. It occupies the main square and several adjacent squares and walking streets in the Old Town and it goes on for several days. People make their reservations a year ahead of time. The fair has a huge beer tent, a carnival, many street food and souvenir stalls. It is truly amazing. Especially at night when everyone is out celebrating . It also has a heavy focus on music (Salzburg is the birth place of Mozart).

On day two we spent the morning exploring the local castle, Hohensalzburg Fortress (bucket list kind of place, perched on a hill) and as soon as we descended back into town we smelled steckerlfisch for the first time. It was not hard to find the stall selling it.

Those very first steckerlfisch we tasted had been dusted with flour and the skin was extremely crispy. The lady took the two fish we chose from the grill, placed them onto a pile of paper near the tiny check-out table and swiftly pulled out the sticks. She then brushed each fish with olive oil and placed several lemon slices inside the bellies. She wrapped them up in paper and handed them to us.

We could barely wait the maybe three minutes it took to buy two steins of beer and sit down at the wooden tables in the center of all the stalls to eat.

Definitely a food experience we won’t forget. We will definitely go back to St. Rupert’s fair as soon as our son is of age to drink beer:) 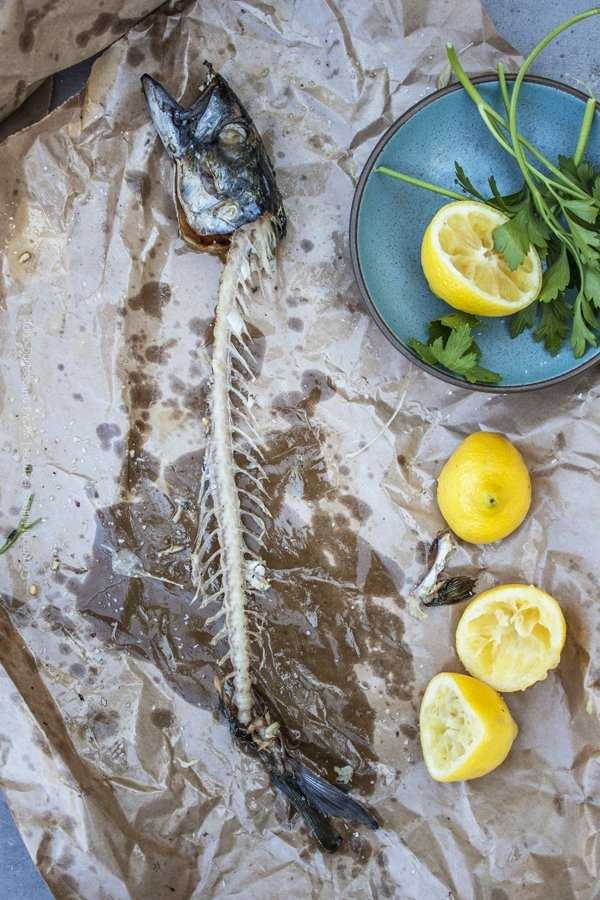 Once you find yourself in the presence of a steckerlfisch I really think that you will not stop eating until all that is left a head, bones and a tail.