Apple fritter donut rings prepared with whole apple rings tossed in delightful, airy batter and shallow fried in a pan. Known as Apfelküchle or Apfelbeignets these treats are one of the most popular pastry desserts in Germany, especially in fall and during the Oktoberfest. 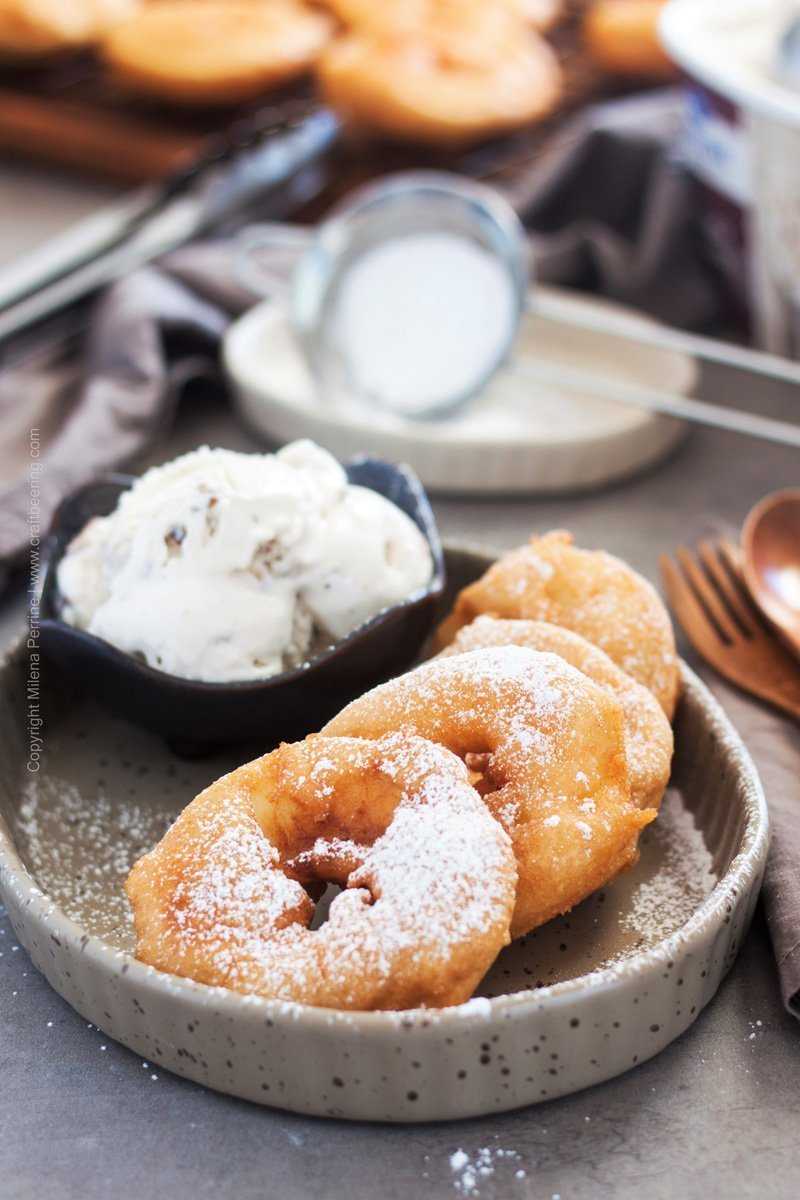 Better than doughy apple fritters, these apple rings are encased in a very light, crunchy batter.

Go straight to the Recipe Card or
Read on for relevant tips and how-to, step-by-step pictures (2 mins).

This is an authentic recipe for Schwäbische Apfelküchle Chris has from working at Kaltenberg Castle. The method of preparation has a few subtleties that truly boost the end results – the apple rings are infused with extra flavor before they are dipped in the apple batter and the batter itself is mixed to impress.

The three secrets to flavorful, fresh tasting apple rings encased in puffy, crispy batter are to
(1) soak the apples in rum (or Obstler/Schnaps), sugar and lemon juice,
(2) use a beer batter (bierteig) with Bavarian wheat ale and
(3) separate the eggs and beat the whites to stiff peaks before folding them into the beer batter.

That being said, you can skip the ring soaking and beating the egg whites separately and substitute the German beer with sparkling all American cider. But at the expense of flavor and texture. We recommend that you make the recipe as written – it is so worth it. 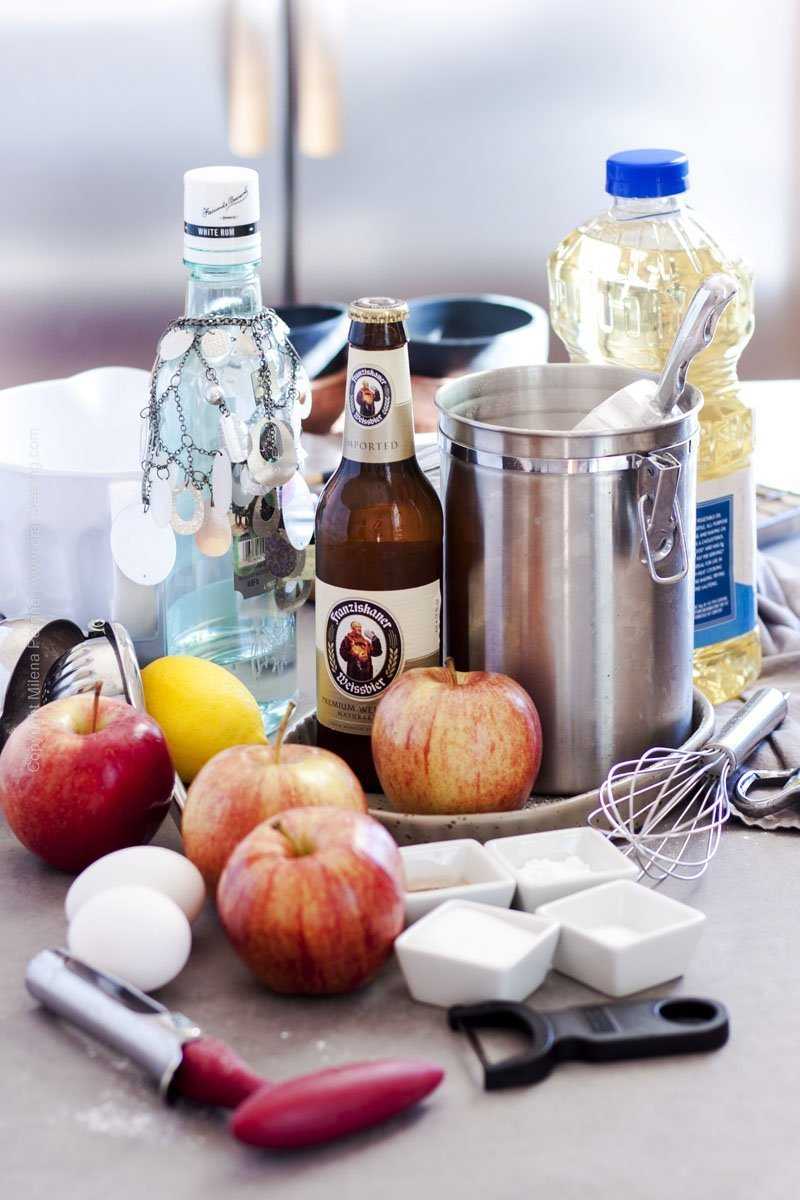 For best results you need to prep the apples about an hour ahead of time and the batter about half an hour to an hour earlier.

Step 1. Begin by coring, peeling and slicing the apples.

Step 2. Place them in a glass container with a lid or simply a gallon freezer bag and add sugar, lemon juice and rum. Coat the rings well, close the container or bag and let them soak in the liquid.

TIP: If you would rather not soak the rings as shown, cut them right before you fry them so they do not turn brown (stop at #3 above).

Step 3. Prepare to mix the batter:

TIP: Allowing the batter to sit for about half an hour lets the yeast from the hefeweizen work its magic and leads to a better rise during pan frying.

Step 5. Fry the apple fritter donuts. Heat vegetable oil in a dutch oven or other deep pot. Dip the rings into the batter and fry until golden brown on each side. The batter will puff up before your eyes. Remove with a slotted spoon and place over cooling rack or paper towels to drain once you remove them from the pan. 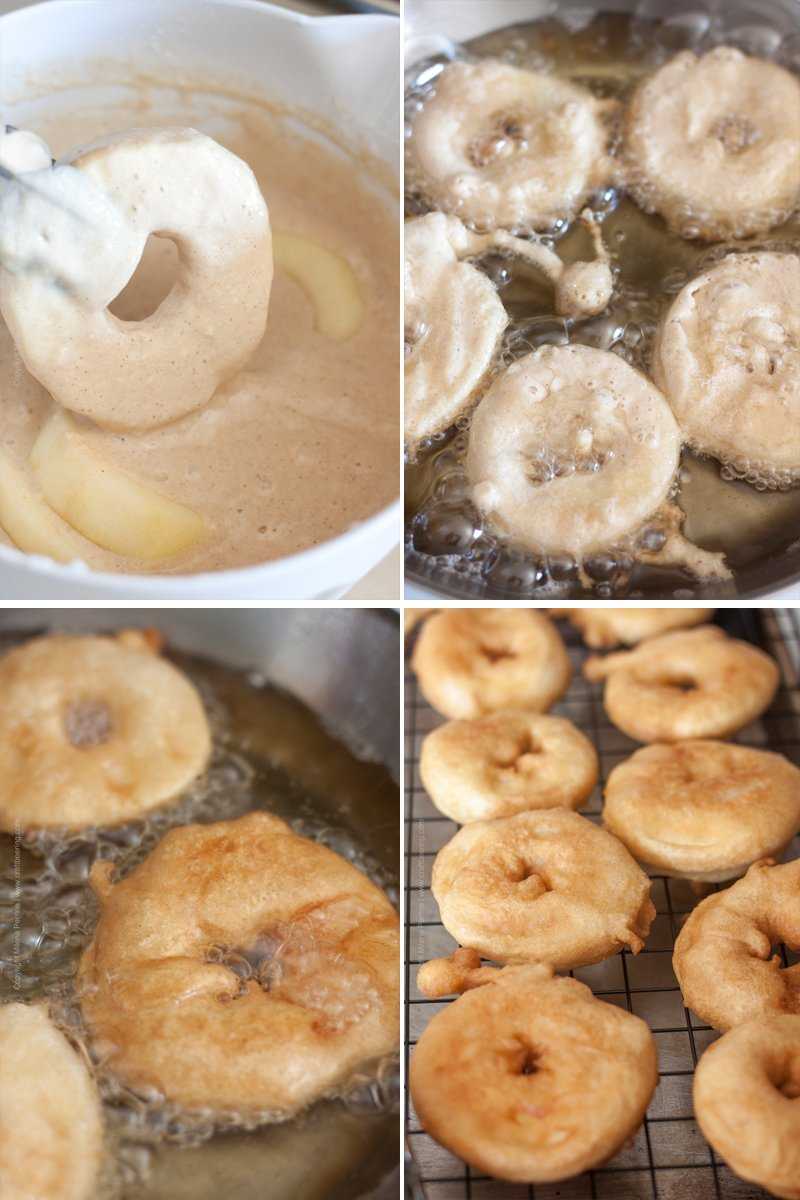 The shallow fried apple rings are best enjoyed hot so do not waste time in addressing them. 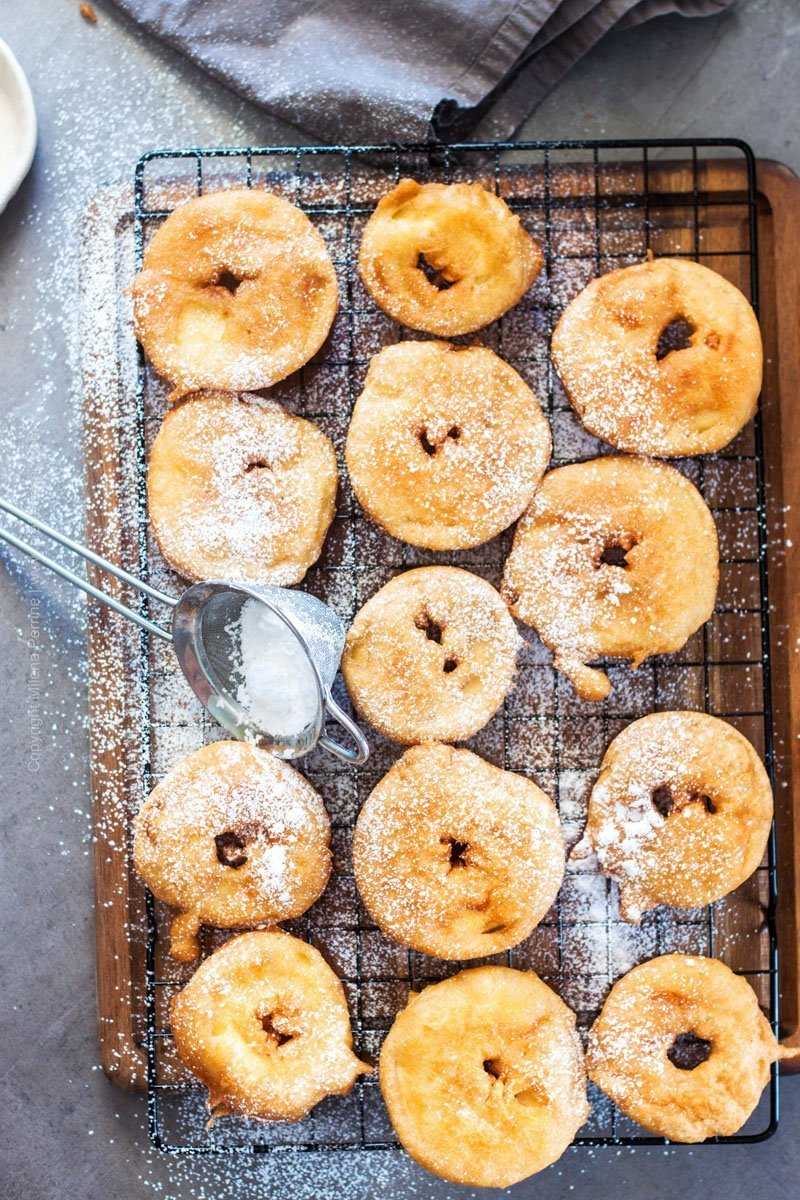 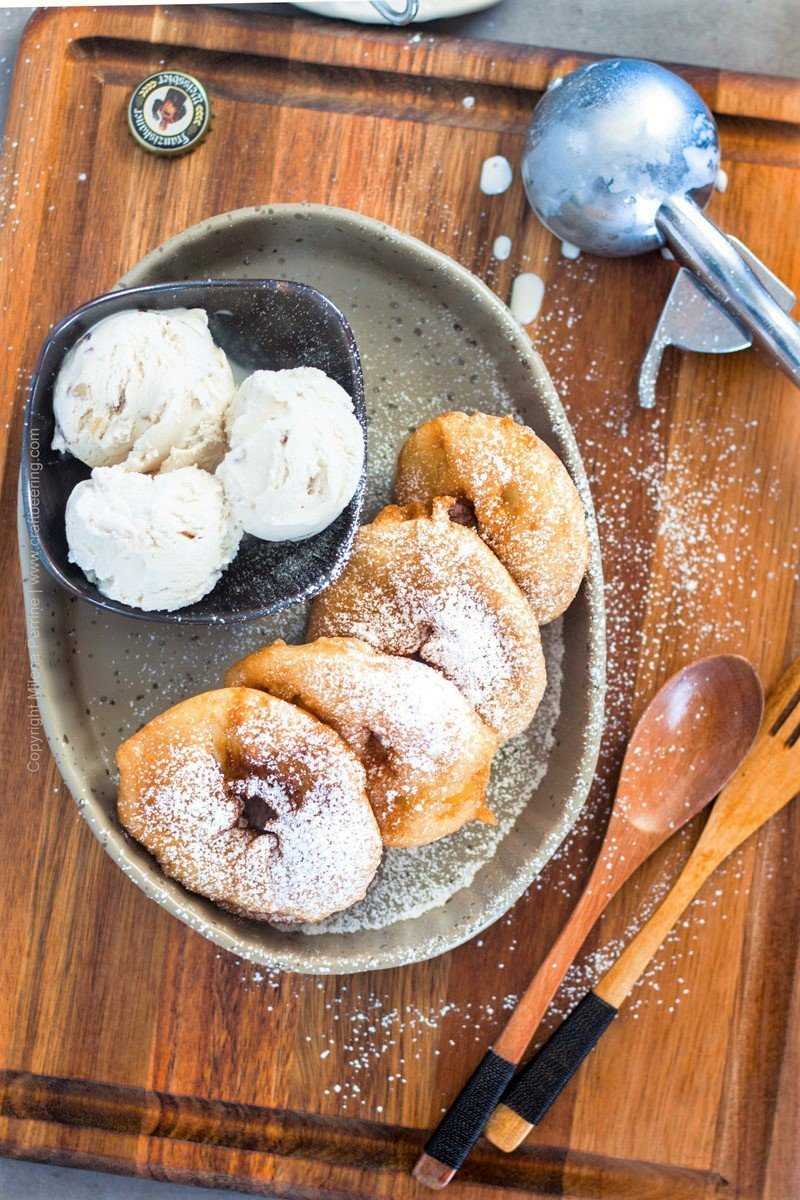 As decadent as these apple fritter donuts are, they are not as high in calories as you might expect because the apple rings constitute half of the fritter. Each one has about 150 calories as per our apple fritter recipe, depending on the actual size.

How to Make Apple Batter

Another popular way of preparing homemade apple fritters is to fold diced apples into the light and airy beer batter.

The resulting apple batter is then scooped and pan-fried in the manner of thick pancakes with a circular shape and about 4 inch diameter. In Germany this version of preparing the fritters is widely known as Apfelküchlein (apple cakes) and some people prefer it because of its arguably simpler execution.

If this is the method you’d prefer to use you really do not need to go searching for a German apple pancakes recipe. Simply make the batter as shown above, peel and dice some apples and fold them into it. Then fry as you would pancakes.

1. Core, peel and slice the apples into rings (1/2 to 3/4 inch thick). Place them into a glass container or plastic freezer bag and sprinkle with sugar. Add rum and lemon juice, mix together and coat the rings evenly. Let them soak for 30 to 60 mins. **

2. Measure the flour then sift it. Add the baking soda, salt and cinnamon and mix. Set aside.

3. Separate the egg yolks from the whites. Beat the yolks lightly and the whites to stiff peaks. Set aside.***

4. Measure out the beer. If using actual hefeweizen pour just over half the 12 oz bottle into a glass and save about 5 oz from the bottom. The dregs have banana/clove smelling yeast you want to capture. If using another beer or white wine or cider simply measure out 2/3 cup. Feel free to enjoy the beer you did not use.

5. Add the beer to the flour mixture, whisk. Add the egg yolks and whisk to incorporate. Fold in the beaten egg whites. *** Rest the batter for 30 to 60 mins.

6. Heat enough vegetable oil in a pan to cover the bottom about 1 inch deep. Heat to 350 F.

7. Dip the apple rings into the batter and let excess drain. Fry for a couple of minutes per side until they puff up and turn golden-brown. Do not overcrowd the pan. Place the fried rings onto a cooling rack placed on top of a baking sheet.

*You can use a different beer, balanced or skewed to the malty side. Oktoberfest lager or pumpkin lagers are especially fragrant. You can also use cider or sweet white wine.

**If you do not want to soak the apple rings simply slice them just before you are about to fry them.

***The beaten egg whites will make the batter airier. While you do not have to let the batter rest nor soak the apple rings as described doing so will give you more flavorful and puffier fritters.