Easy and infinitely customizable barley salad recipe. Tips on cooking barley and a list of its amazing health benefits. 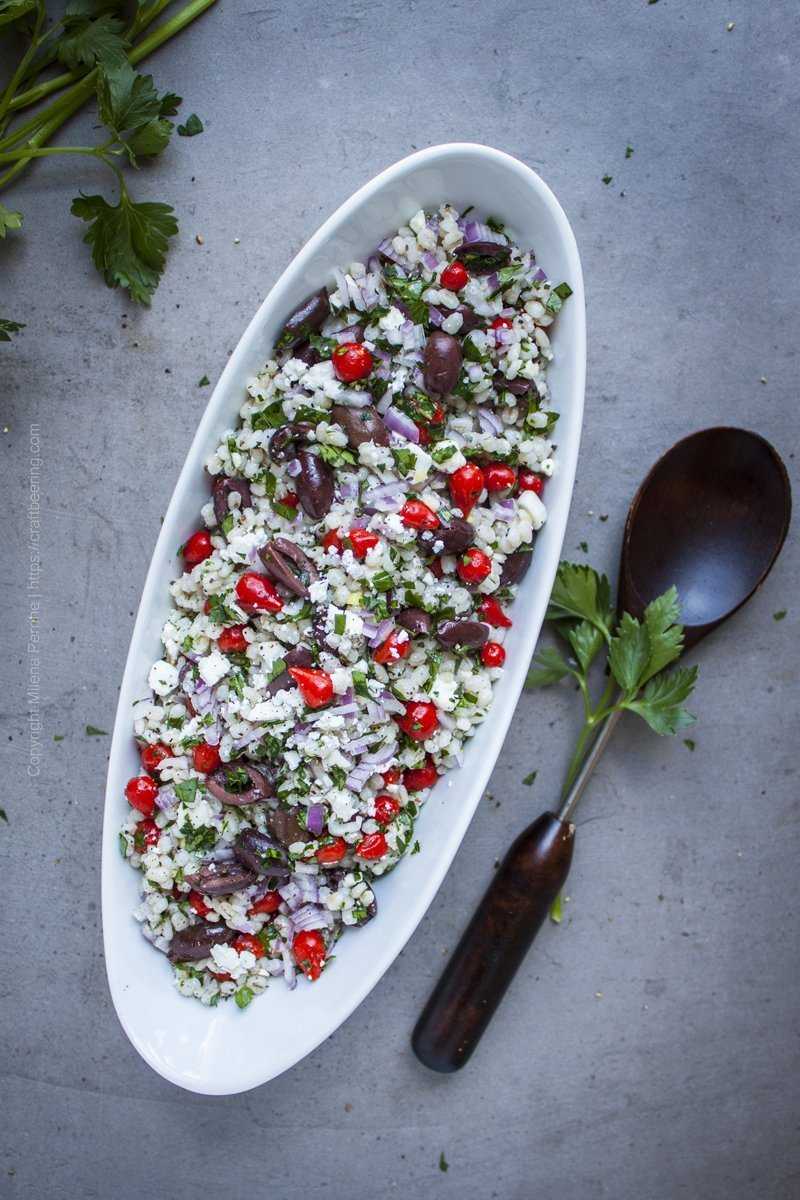 Barely is a super grain in terms of its high nutritional merits and was one of the first grains to be cultivated the world over by our ancient ancestors. As craft beer fans we also have deep appreciation for its contribution to the foundation of brewing (and the rise of civilization that happened on the side).

We love using it as a cooking ingredient – in soups, stews, risottos, and especially in hearty salads. Cooked barley has an enjoyable texture and flavor and its health benefits help counter any adverse effects of (sometimes) too liberally enjoying craft brews. 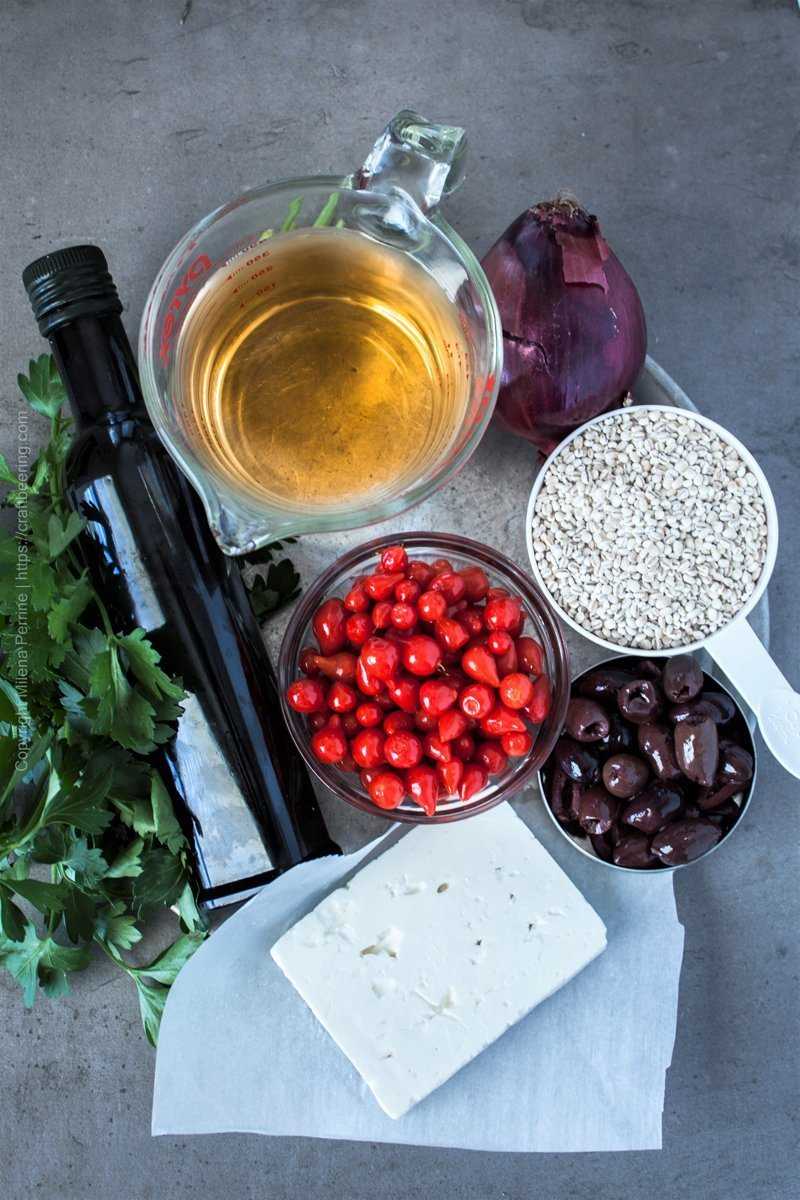 There are two types of barley to choose from – pearl barley (aka pearled barley) and hulled barley (aka barley groats).

Pearl barley is more common. It takes less time to cook because the outer husk (hull) of the grains has been removed and the bran layer underneath it partially or fully polished or ‘pearled’.

Hulled barley is considered even healthier – it is a whole grain with only the inedible husk removed and the bran layer intact.

Both are suitable for barley salad and contribute a mild nutty flavor.

How to Cook Barley

Cooking barley  entails simply simmering it in water or stock until it becomes tender but is still slightly chewy.

Use a ratio of 1 cup barley to 3 cups of liquid when cooking pearl barley. One cup of dry pearled grain yields three cups of cooked.

If you choose hulled barley instead – add about 20 to 25 extra minutes to the cooking time. Use the same water to grain ratio but be advised that it will absorb less water in comparison with the pearl version.

Step 1. Because barley is a natural agricultural product even modern cleaning technologies may leave behind foreign material and less than perfect grains. Sort and rinse it under water before cooking it or simply submerge it in a bowl of cold water and scoop up grains/impurities that float to the top. 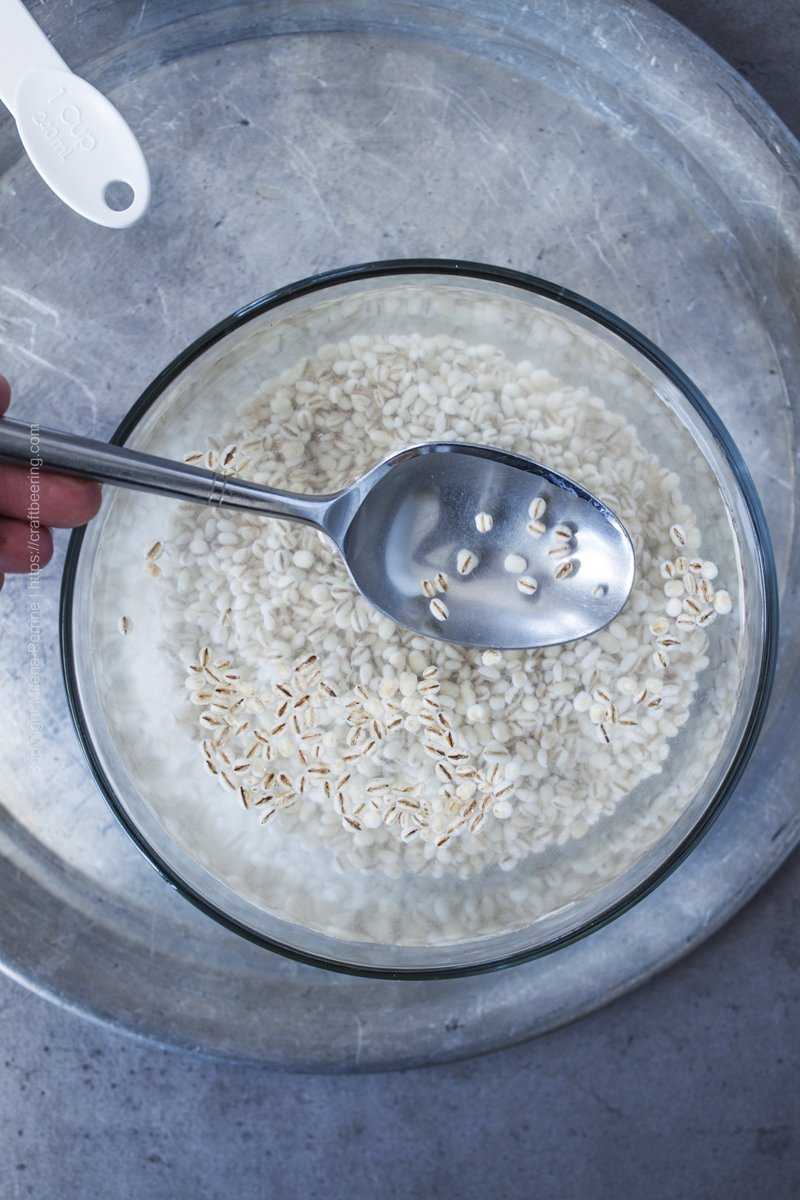 Less than perfect grains float to the top and are easy to remove with a spoon.

Step 2. Bring 3 cups of water or stock (we used vegetable stock) to boil, add 1 tsp salt (optional if using stock) and add the barley. Lower the heat and simmer until tender but still firm and most of the liquid is absorbed.

Step 3. To cool off the cooked barley faster scoop it out of the pot and spread it over a baking sheet. Make sort of diamond patterns as seen below. This will also help it dry out a bit and become less sticky. 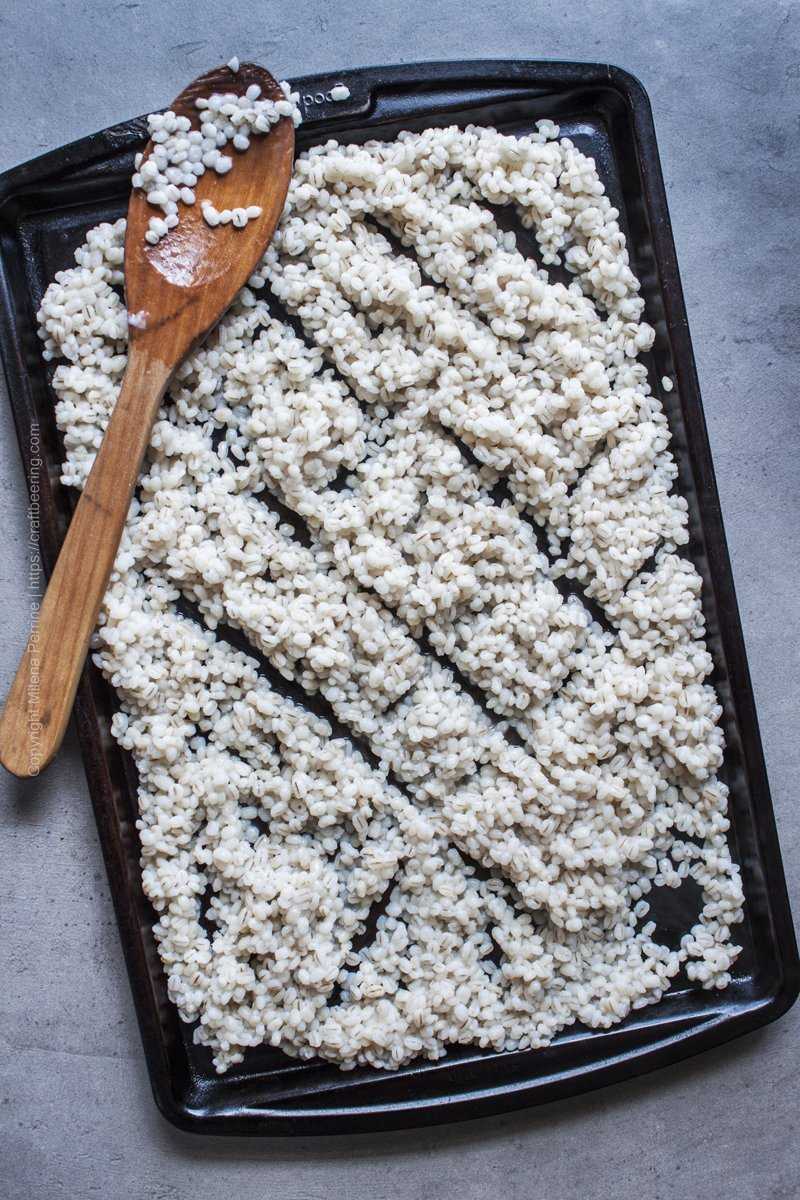 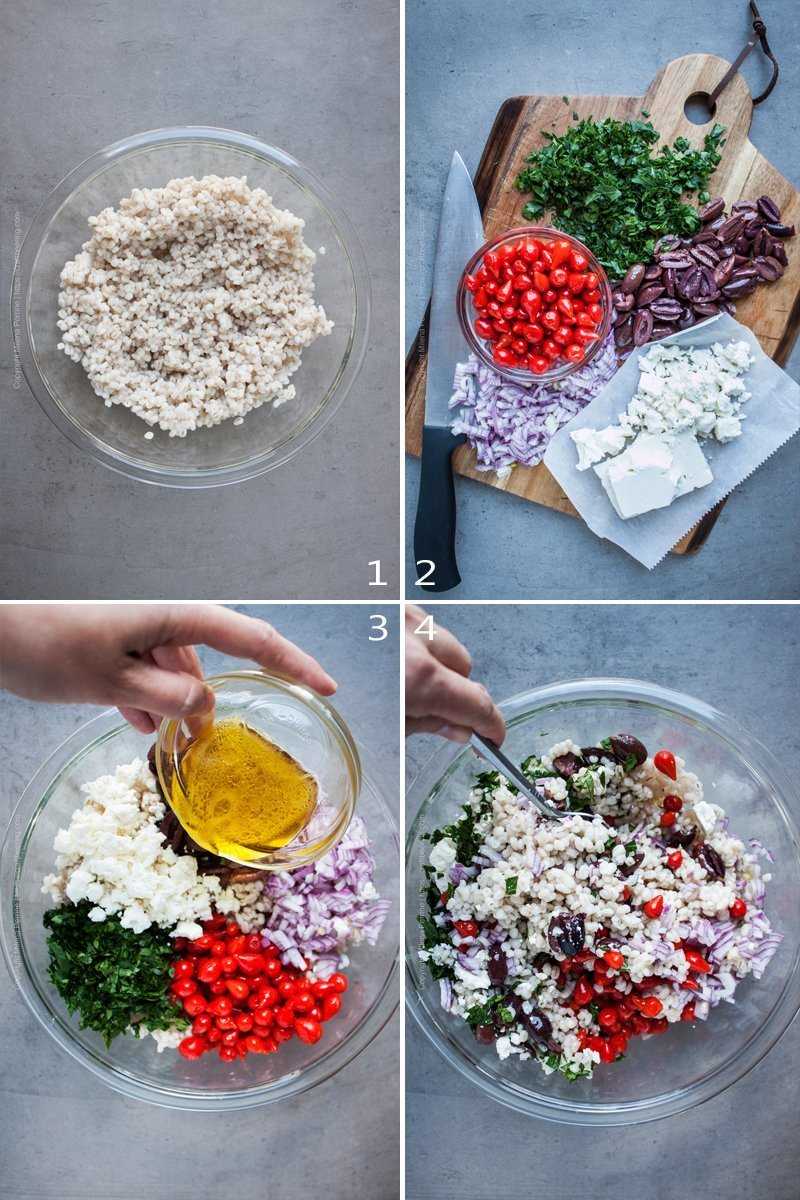 Once your boiled barley has cooled down completely, prep the rest of the salad ingredients (don’t crumble the feta cheese too small and leave the sweet drop peppers whole, #2 above), add them all to a mixing bowl and pour vinaigrette over them.

Mix well, taste, season with extra salt and pepper as needed and serve. 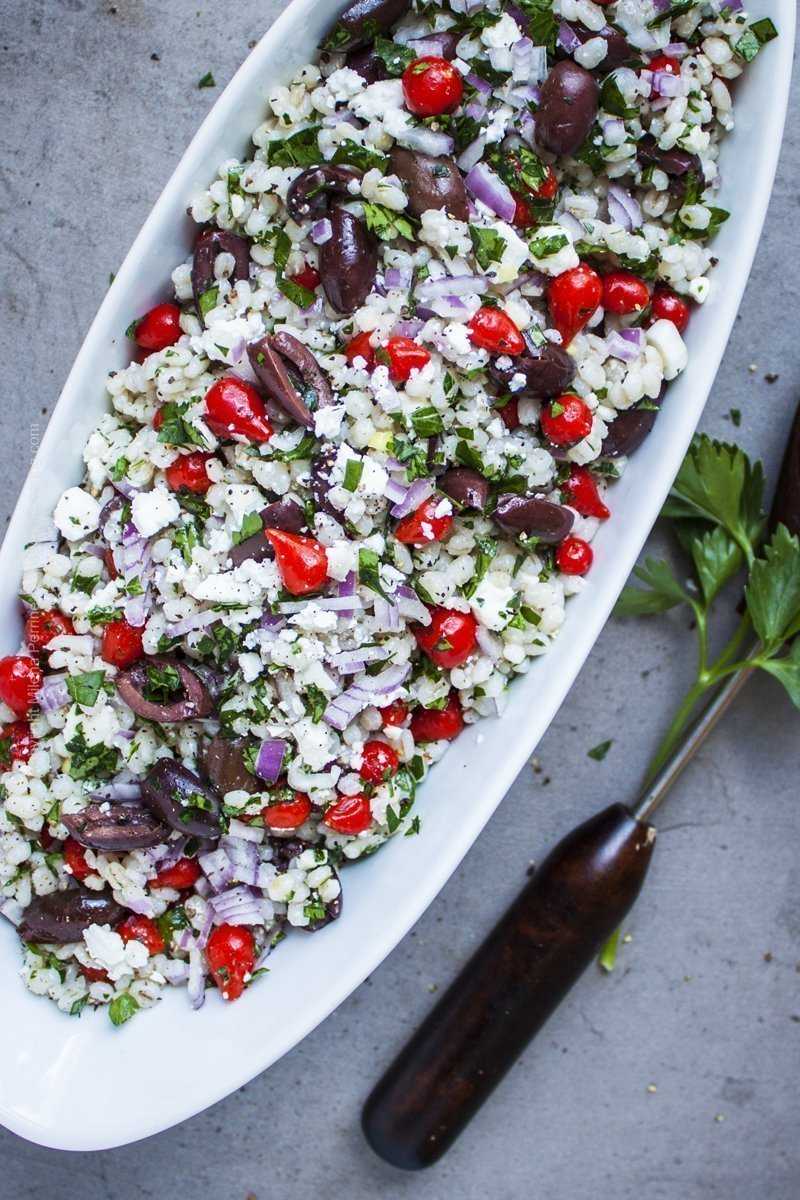 Besides the barley salad version we present in the recipe card here are a few other of our favorite ways to dress up cooked barley. You know your flavor buds best, so use as little or as much of each ingredient listed as you see fit.

Barley salads make a great side to pork chops or lamb chops and all kinds of grilled meats in summer.

Besides its lovely flavor cooked barley has multiple health benefits which is why barley salad is on regular rotation in our home.

Cooked barley can help you:

Barley has more protein than any other grain (1 cup contains about 10 grams versus only 5 for quinoa for example). It also contains both soluble and insoluble fiber, iron, potassium, manganese, selenium, calcium and magnesium.

Hulled barley is richer in nutrients and higher in fiber than pearl barley.

In addition to the nutritional benefits you can obtain from cooked barley you can also tap into the astonishing Health Benefits of Barley Grass Juice Powder and consider lemon barley water, barley tea and roasted barley coffee substitute as refreshing beverages.

*Because pearl barley absorbs almost all of the cooking liquid during boiling it is a good idea to use to opportunity to infuse it with flavor by using vegetable or chicken stock. If you don't have any on hand use water with 1 tsp of salt.

Feel free to adjust the quantities of and substitute the salad ingredients beyond the cooked barley to suite your individual taste.

Any leftovers of the salad will keep well refrigerated for a couple of days.

This post and recipe card contain affiliate links which help support our blog at no cost to you.