Easy recipe for spring themed beer risotto. We are looking at green onions, asparagus, fresh peas and most importantly – Gose ale with lime. 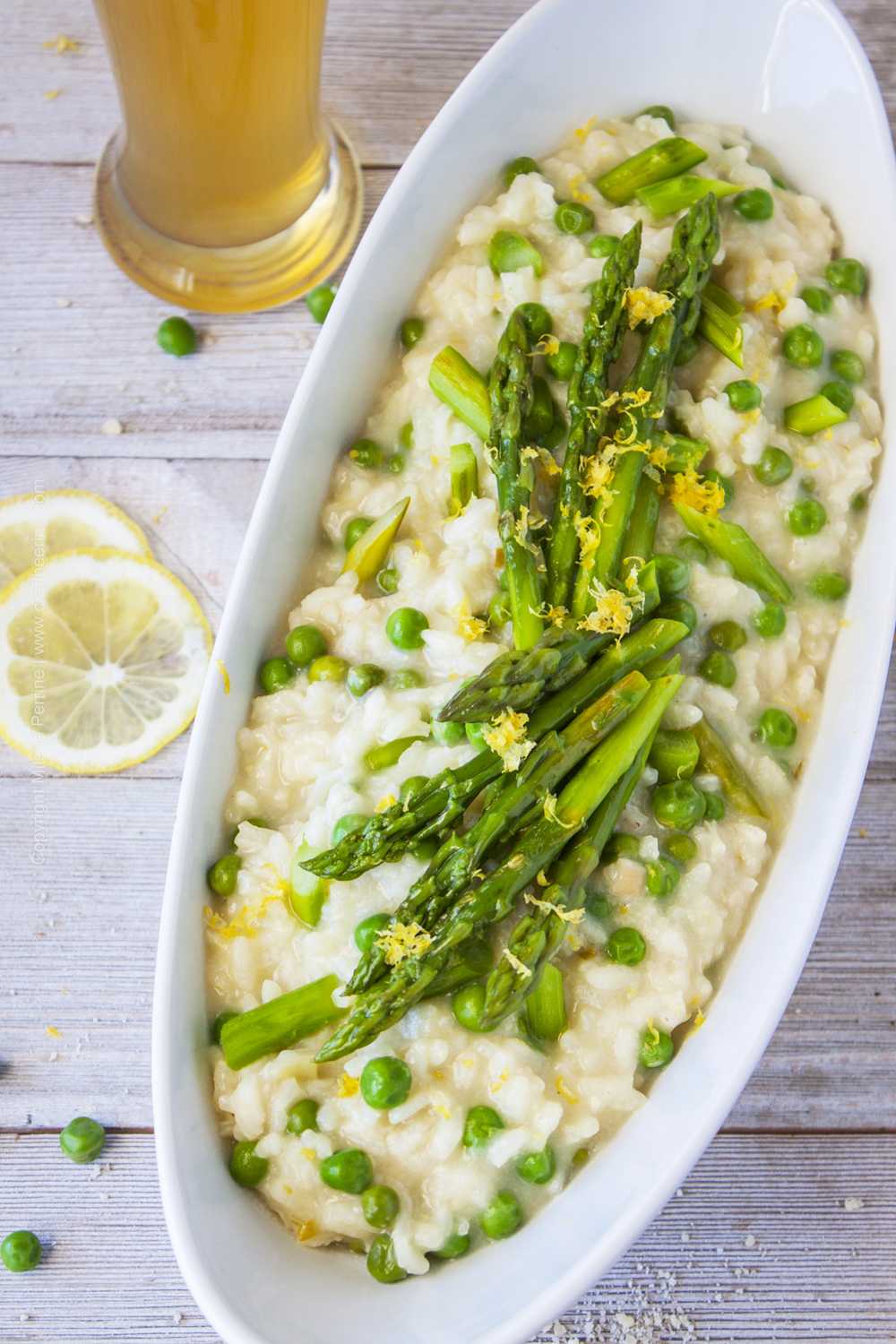 Why This Beer Risotto Recipe Works

The crispness and flavor of frehs green peas and asparagus are uplifted by the mild tarntess of the gose beer.

It all began in the German town of Goslar in the early 1600. Gose (pronounced Goes-uh) was brewed with fifty percent or more of the grain bill being malted wheat and was entirely spontaneously fermented (i.e. without the addition of yeast, it was thought that the beer fermented itself:). The wheat gave it a hazy composition and the spontaneous fermentation (i.e. whatever microbes were out there in the air and inoculated the ale) contributed a pleasant sour flavor. The minerals present in the local water drawn from the river Gose lent a slightly salty flavor and the famous name.

Later on, after yeast and souring bacteria were understood, the characteristic mild sour flavor was achieved by adding top fermenting ale yeast strains and Lactobacillus bacteria to the cooled boil. The saltiness was brought about by the addition of salt to the water – for example the water of the town of Leipzig, where Gose became insanely popular in the 1700’s had a completely different mineral profile than the water of the river Gose, so adding salt was necessary. Frequently coriander was used (and still is) to spice up the beer in addition to hops to enhance the flavor profile. Overall, Gose is not a hoppy beer (IBU of only about 10-15).

Traditionally brewed Gose has a beautiful straw color. It is hazy and forms a rich and bubbly white head. It has the fragrance of freshly zested lemon peel and is very crisp with a pleasantly tart/zesty/spicy taste and a hint of saltiness at the end. The ABV is low, around 4.5% and since the beer is very effervescent, drinking it is pure joy. Should you find yourself in Leipzig, Germany, definitely taste it.

In the last few years Gose has sort of gone viral in the US. I mean it. You will have no problem finding Gose true to the original style and many variations of it at your local craft beer store or tasting room. Go explore, it will be fun.

Most of our local breweries have made a Gose or are currently making one. Some of them more than one and the creativity evident in the style interpretations is such an adventure for the palette. We have also had the pleasure of sampling blood orange Gose, and most recently on our road trip a plum Gose (sooo good).

In our opinion the best Coloradoan variation is the El Gose brewed by Avery Brewing Co. It is not too tart even though lime has been added to fortify the Lactobacillus action. It is super crisp, very fragrant and just enough sea salt has been used to augment the water and create the traditional salty aftertaste. Amazing dry finish completes the drinking experience.

That being said, it was a no brainer to choose El Gose to impart sprightly tart flavors to a dish eager to embrace them – a spring beer risotto. The joys of cooking with beer!

A quick note on the asparagus and fresh green peas. I shiver at the sight of tired, overcooked, shriveled asparagus or mushy, grey peas. And what would be the point in getting garden fresh asparagus and peas if the cooking method will annihilate them?

To keep both veggies looking vibrant and to retain their fresh flavors here are Chris’ tips. He trained me on perfecting asparagus years ago:). Just in case you didn’t already do this as part of your cooking routine.

Prep the asparagus by peeling the fibrous skin going from the chopped bottom part towards the speared top. If using peas still in the pod shell them and rinse them well, if using frozen from fresh peas – good for you:). Blanch both in a big pot of boiling salted water for about two minutes then drain in a colander. You can either prepare an ice bath to shock the asparagus and peas and stop the cooking process or … if you feel like taking a short cut (I did) simply rinse with very, very cold water and dump ice on top of them. (For the record, the ice is not supposed to be directly touching the vegetables, hence the ice baths. But you know what they say about rules, right?)

When the asparagus and peas have cooled off, drain them and dry them with a paper towel. They are then ready for a brief stint in a hot, olive oil coated pan to get beautifully blistered and heated through.

In my opinion there are good reasons for risottos in general and this spring risotto in particular to benefit from using craft beer (Gose specifically) versus wine. I know, I am biased, even though I do like my wine:)

Because arborio rice is a grain which absorbs a lot of liquid it can also absorb a lot of flavors. Several craft beer styles offer flavor profiles that complement arborio and the vegetables or proteins typically added to risottos. I think that they do so in ways that wine cannot compete with. Imagine a fall beer risotto cooked with an earthy and malty brown ale or a beautifully spiced Oktoberfest… then adding mushrooms or butternut squash respectively.

Craft beer can taste earthy and sweet without a corresponding uptick in alcohol content, meaning you will not be imparting a strong alcohol burn to the dish. You can also increase the amount of beer versus the needed stock and achieve an even more profound flavor.

Beer is also less acidic than wine which makes it easier to avoid undesirable flavors (unless you went with a triple IPA… I would simply caution you to stay away from IPA when making risotto). Have you ever made the mistake of pouring too much wine on top of your nicely browned arborio that went way past deglazing the pot and breaking down the starches? Sometimes the acidity in wine simply won’t cook off.

With this spring beer risotto the mild tart and salty flavors of the Gose get so well absorbed by the rice that using white wine pales in comparison. Anyone tasting the dish would likely guess that you flavored it with lemon juice and miraculously got rid of the sharp acidity.

A touch of lemon zest though is very welcome once the asparagus and peas are folded in the beer risotto. It teases the nostrils and paves the way for the beautiful lemony tartness imparted by the Gose.