How to make beer shrimp scampi in a skillet – enjoy as an appetizer or serve over pasta. 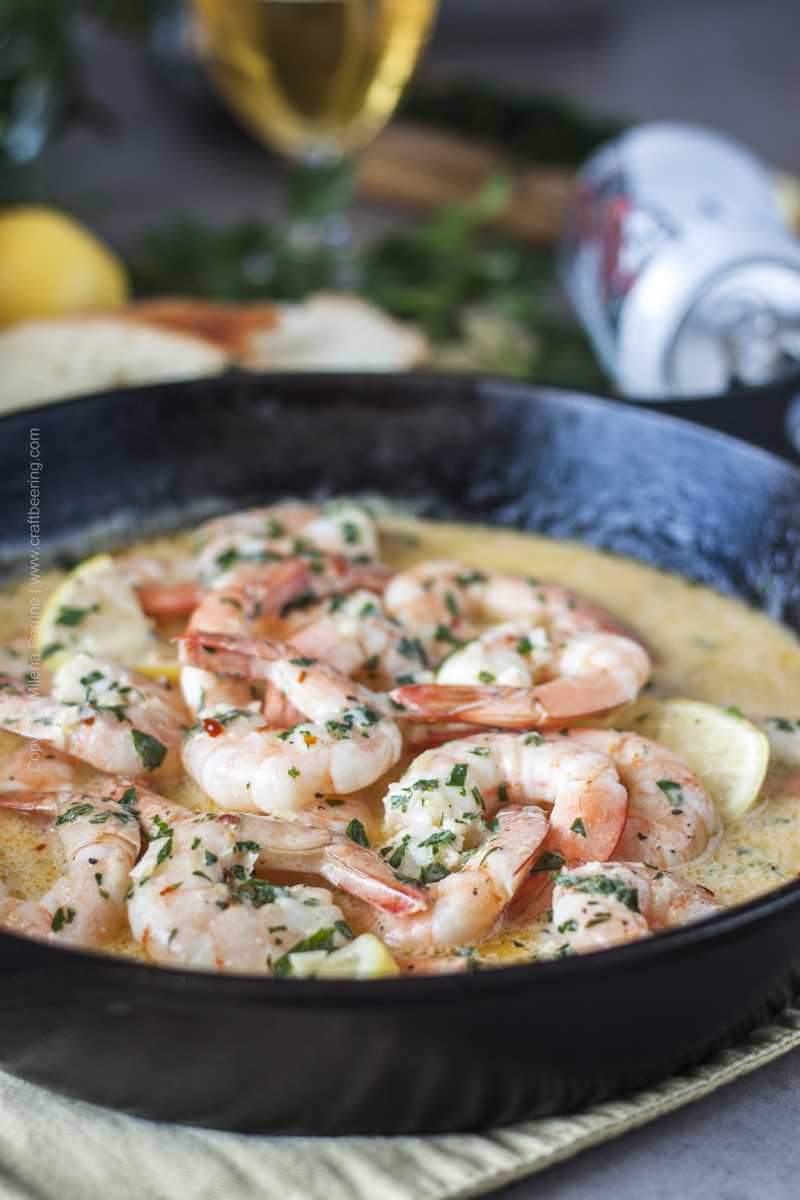 About This Beer Shrimp Scampi Skillet

It is built around the idea of scampi sauce – both ingredients and technique wise, but leverages beer as the deglazing liquid and source of deep flavor. We also add a bit of cream as a liaison to create a homogeneous pan sauce that does not break. All the cooking takes place on the stove.

We typically enjoy this particular dish as a shared appetizer, but once in a while we add a bit more cream to ensure there is enough of the sauce to serve the beer shrimp over pasta. 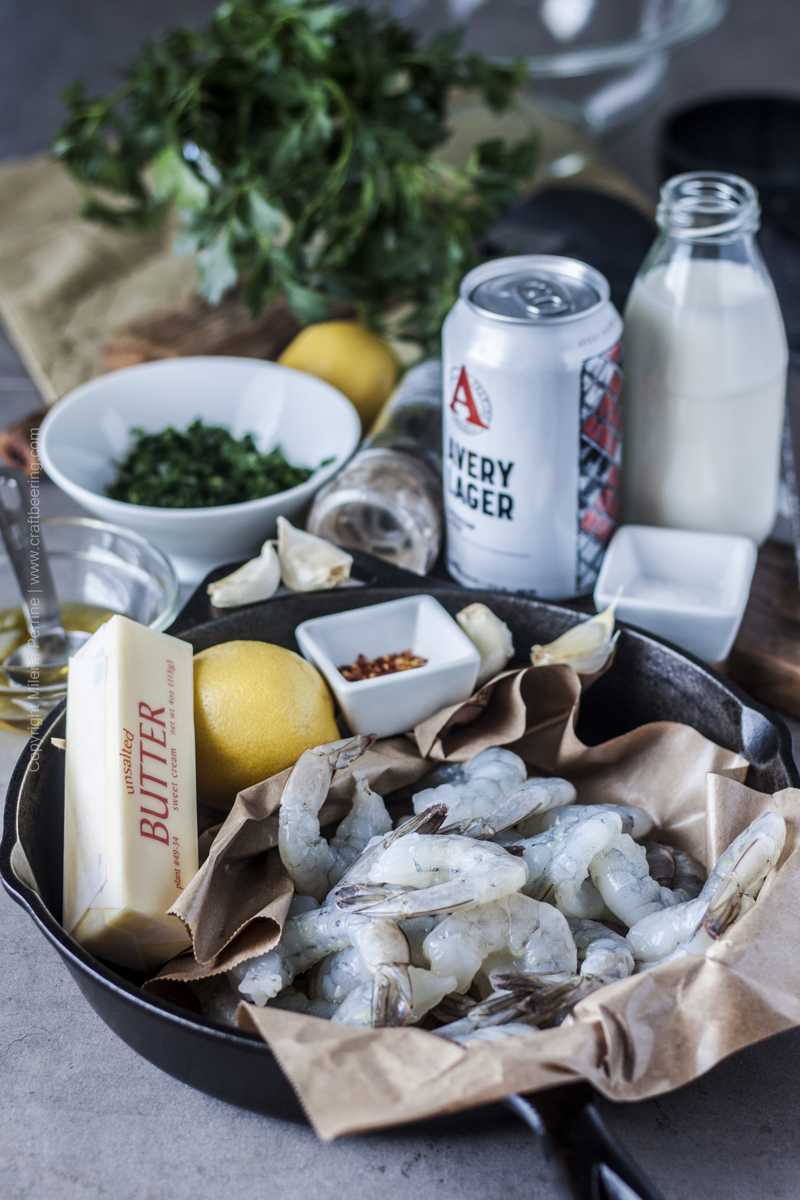 A 10 inch cast iron skillet is the perfect size to cook about a pound of beer shrimp scampi.

When we cook with beer we typically chose a brew the flavors of which complement and/or amplify those of the other ingredients in the dish. This recipe is no exception.

For best results choose one of the styles below – they will seamlessly integrate into the Scampi flavor profile.

As an overview of the cooking process – first you will

NOTE: It is important to reduce the beer in order to concentrate its flavors. Cook the shrimp in the skillet for about 3 to 4 minutes or until it just turns pink – do not overcook.

You can transfer the finished shrimp and the sauce to a serving dish if you’d like or just garnish with a few lemon slices and present it in the cast iron skillet with a basket of garlic bread, or freshly baked bread or even beer biscuits next to it.

If you’d rather enjoy it over pasta, add a bit more cream to the skillet (up to 3/4 cup), perhaps an extra pinch of salt and red pepper flakes. 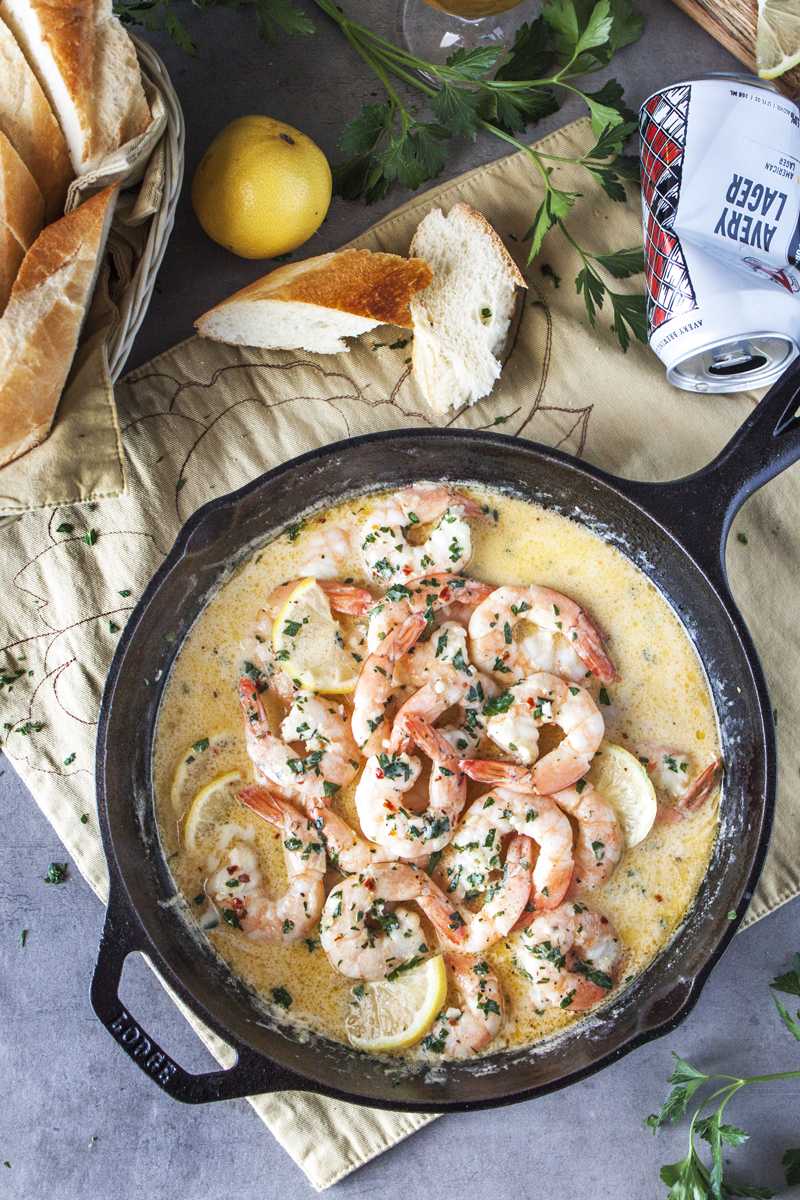 1. In a bowl toss the shrimp with the lemon zest, 1 tbsp olive oil, salt and the two grated garlic cloves. Let marinate for about 1 hour, refrigerated.*

2. Heat a 10 inch skillet over medium-high heat and add the remaining 2 tbsp olive oil. Add the minced garlic and the red pepper flakes and stir around until the garlic becomes fragrant, about 40-50 seconds.

3. Deglaze with a little bit of the beer, then add it all after the initial foaming subsides. Add the lemon juice, bring to simmer and let the beer reduce for a few minutes (by about a third).

4. Add the butter and the cream** and stir to mix into the reduced beer. Let simmer for a couple of minutes and add the shrimp to the skillet. Cook until they just turn pink, about 4 minutes. Sprinkle with chopped parsley and ground pepper to taste over and garnish with lemon slices. Serve.

*You can skip this step if you are short on time, but we highly recommend that you don't - it is all about more flavor.

**If you'd like to make more sauce so that you can serve the beer shrimp over pasta, add 3/4 cup of cream and season with extra salt to taste. Let the sauce reduce a bit longer before you add the shrimp.