We made and paired a poached plums and lemon sorbet flambe with Bend the Knee Golden Ale. It is the newest addition to the Game of Thrones series of Brewery Ommegang in collaboration with HBO. Our love for Belgian ales and Game of Thrones amplified to the max during season seven’s premiere. I can’t even. 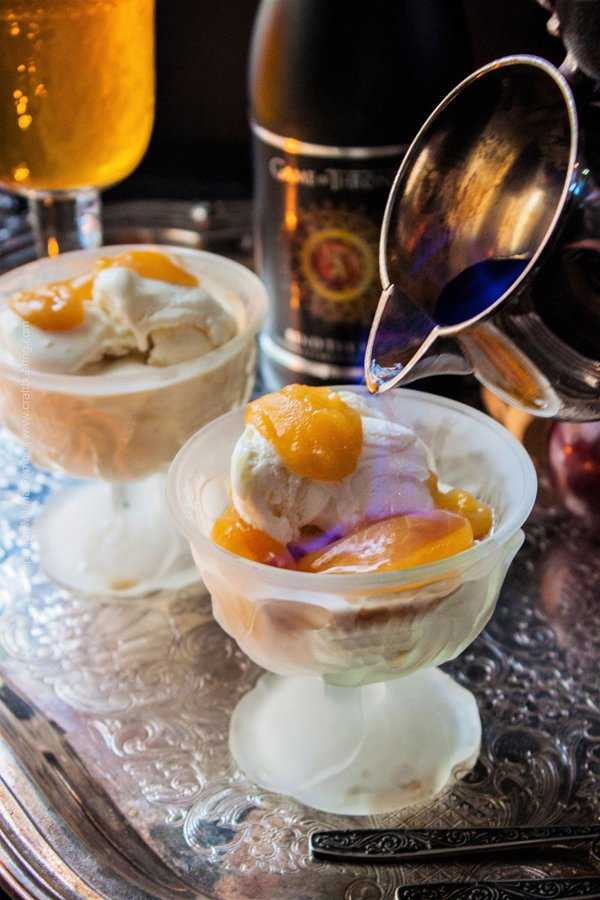 It was not easy to find Bend the Knee Golden Ale in a craft beer lovers’ town like Fort Collins, but we did it!! We got a hold of two bottles with the seal of House Lannister. There are two more bottle designs of the same brew, one with the House Stark seal and one with the House Targaryen seal.

Lannister is definitely not our favorite house, although we strongly favor Tyrion and completely agree that without the Lannisters’ existence the game of thrones would not be the same game. We are loyal to the Starks, fans of Jon Snow… Clearly we still have much to aspire for in the coming months in terms of appropriately decorated bottle label:), but we are still very grateful, because the Belgian golden ale brewed with honey was pure perfection. 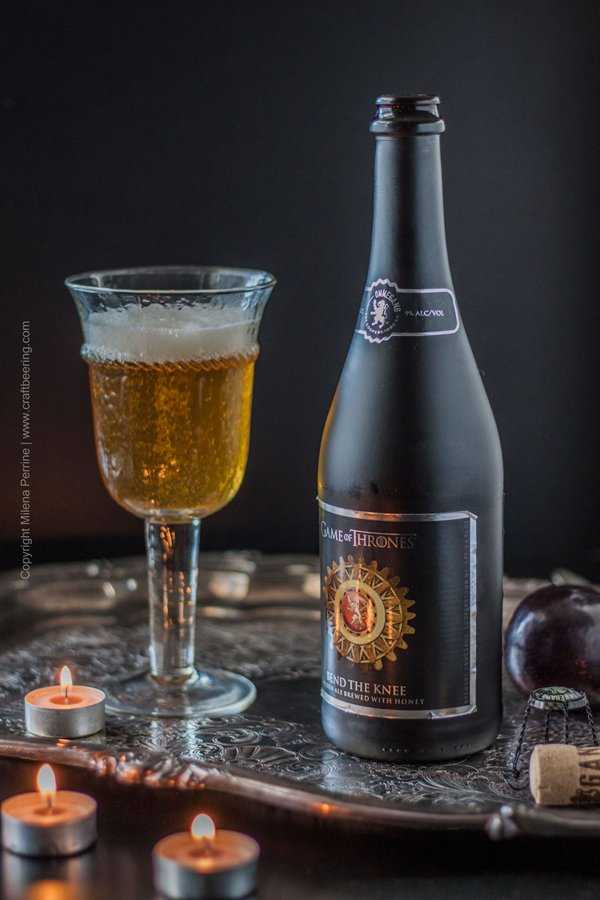 Brewery Ommegang is based in Cooperstown, New York and distributes their expertly crafted brews nationwide, with the exception of ID, MS, MT and WY. They also have a presence in Ontario, Canada. They make the best Belgian style ales in the United States. Hands down.

I cannot tell you how many people I have met over the years who have expressed this opinion. Belgians, born and raised, people who have lived in Belgium long enough to become familiar with the flavors of the Belgian beers and can recognize when something is off, brewers… I always wondered why that was until last year I watched a video lecture/discussion on the microbiology of brewing produced by the American Academy of Microbiology, which included a Q&A session on the subject with two authoritative (and very entertaining) personalities.

One of them, Rebecca Newman, is an expert on microorganisms and fermentation and has worked at Russian River and Dogfish Head. She was asked why Ommegang seem to make the best tasting Belgian style ales, and explained that they understand that the yeast is not everything in a Belgian ale and are experts in achieving the right acid balance in their brewing and pay really close attention to the primary fermentation. (You can watch Microbes After Hours – The Microbiology of Beer if you are interested, 33:50 is the explanation).

Every Ommegang ale I’ve ever tasted has been a complete source of craft beering delight. Bend the Knee Golden Ale is brewed with pils malts and noble hops (my favorite combo), honey and of course the famous Ommegang yeast, which contributes its notable fruitiness. It is pretty high in alcohol (ABV 9%) with a dry finish and absolutely enticing aromas. I wish we had another bottle – writing this is not easy without being able to taste it:). 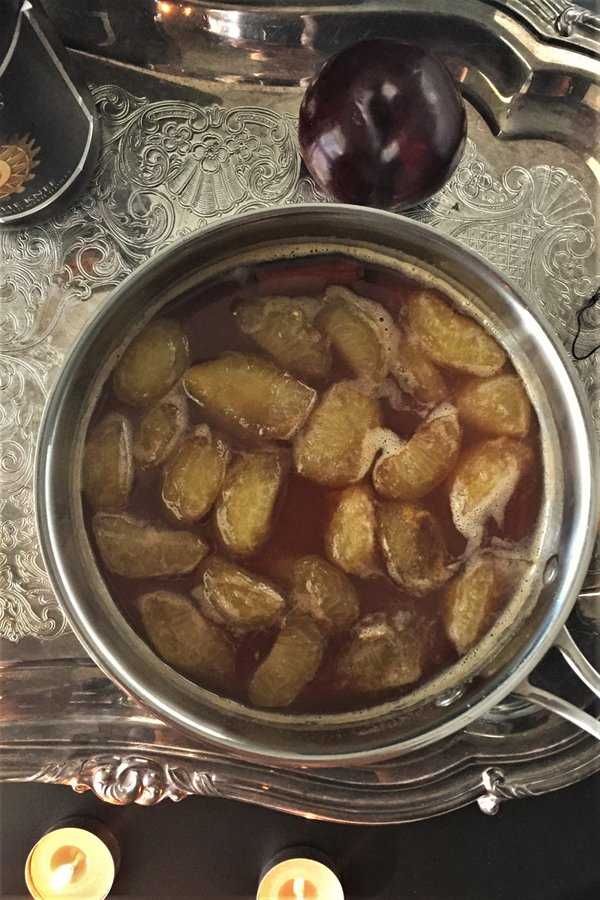 Back to the poached plums and lemon sorbet flambe. I chose plums because Sersei Lannister (via her henchman Qyburn) bribed the kids who ultimately helped her blow up the Sept containing a number of her enemies with … candied plums. Plus, plums lend themselves quite nicely to poaching.

Bend the Knee Golden Ale is sweet, but just for good measure, we threw in some brown sugar. We wanted the plums to taste sweet, almost no traces of tartness so that they would contrast the lemon sorbet just like the flames of the dark rum we used for the flambe would contrast the frozen sorbet (we used store bought, there was no time to make our own).

With most of the oak aged dark rum’s alcohol gone post ‘burnum’ we basically bathed the dessert with warm buttery flavors, infusing and liquefying the sorbet… Chris is such a trooper – he held the vessel with the burning rum for way to long until I could finally capture usable fire shots in daylight…Thank goodness for hand mitts. 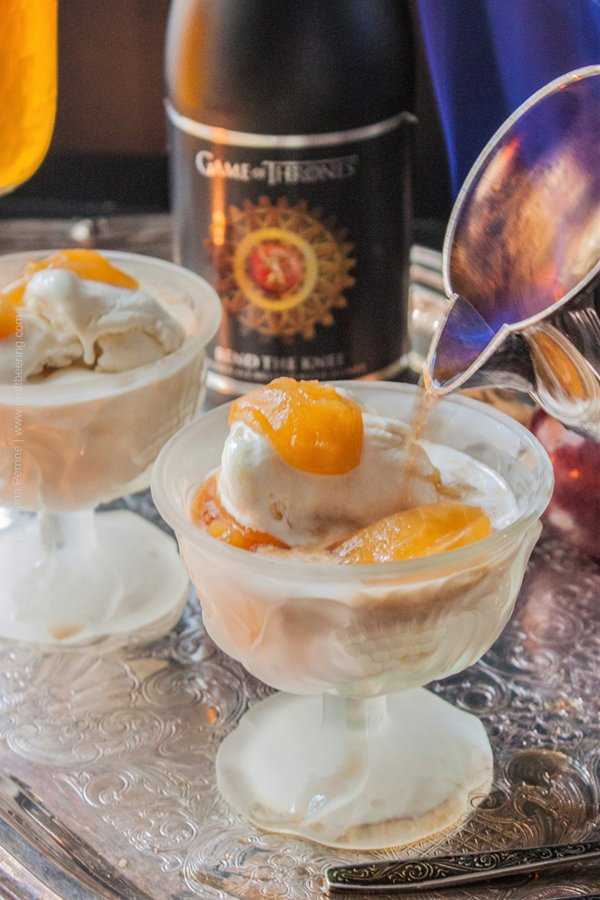 With a ‘song of ice and fire’ dessert in front of us and glasses of Bend the Knee Golden Ale to pair it with we watched Aria Stark sort out what remained of the Freys. So stoked about this season, it has been a long wait.

This fall there will be another Game of Thrones inspired ale. Brewery Ommegang will release a Belgian style double white ale called Winter is Here! (ABV 8.3%) and will also re-release the Fire and Blood Red Ale spiced with ancho chiles (ABV 6.8%) which was the third beer made as part of the series.

I guess we won’t be that sad about the end of summer. But not for a while.

PS. Do be careful with the rum flambe if you decide to make this dessert. Consult the recipe and wear protective mitts. 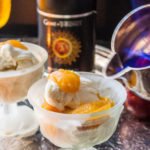