How to braise lamb shanks in the oven and get perfect results every time. Plus – how to make a rich, flavorful gravy from the braising liquid.

Go directly to the Recipe Card or
Read on for useful, relevant information, step by step pictures and a short video about how to braise lamb shanks (3 mins read).

Understand the Cut of Meat

Lamb shanks are bone-in portions of meat cut from either a forequarter or a hindquarter of the animal, just below the leg and above the joint that connects it to either the shoulder or the leg bone. Naturally, there are two types. 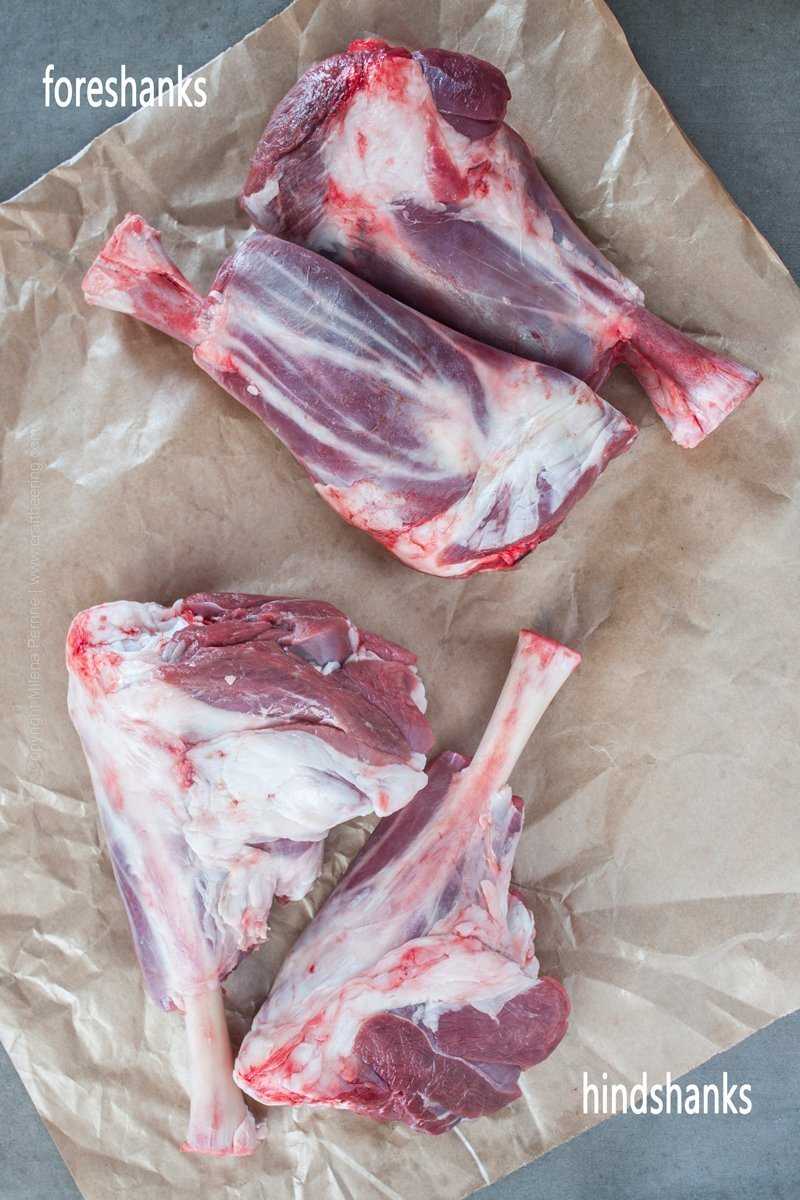 Lamb foreshanks are cut from the front quarters of the animal. They tend to be smaller than their hind counterparts and on average weigh under a pound. They have a sweet, dense flavor. Also known as forequarter shanks.

Lamb hindshanks are cut from the back legs of the animal. They tend to be larger and have a better bone to meat ratio (more meat). Typically a single one weighs over a pound and when cooked can serve two. Also known as hindquarter shanks or drumstick shanks.

The meat is strictly from the lamb leg and typically only a leg bone is included (tibia). Its bone marrow is delicious and contributes tons of flavor to braising liquids.

For both types of lamb shanks frenching is common. To create a pleasing visual effect the meat and connective tissue are trimmed (frenched) to expose a part of the bone.

Where to Buy Lamb Shanks

Your best bet is to visit a local butcher and place an order with them. The meat will be fresh and you can request the type of lamb shanks you prefer (some prefer the meatier hindshanks while others would rather get the smaller foreshanks in order to serve them individually).

The meat we purchased for this post included all four shanks of a single animal – our butcher had just received it and cut them and trimmed them for us. We asked for more or less uniform weight cuts regardless of type.

In bigger cities Asian grocery stores are also a great option if you live nearby one, they seem to stock lamb shanks year-round.

And of course there are many online butcher options. 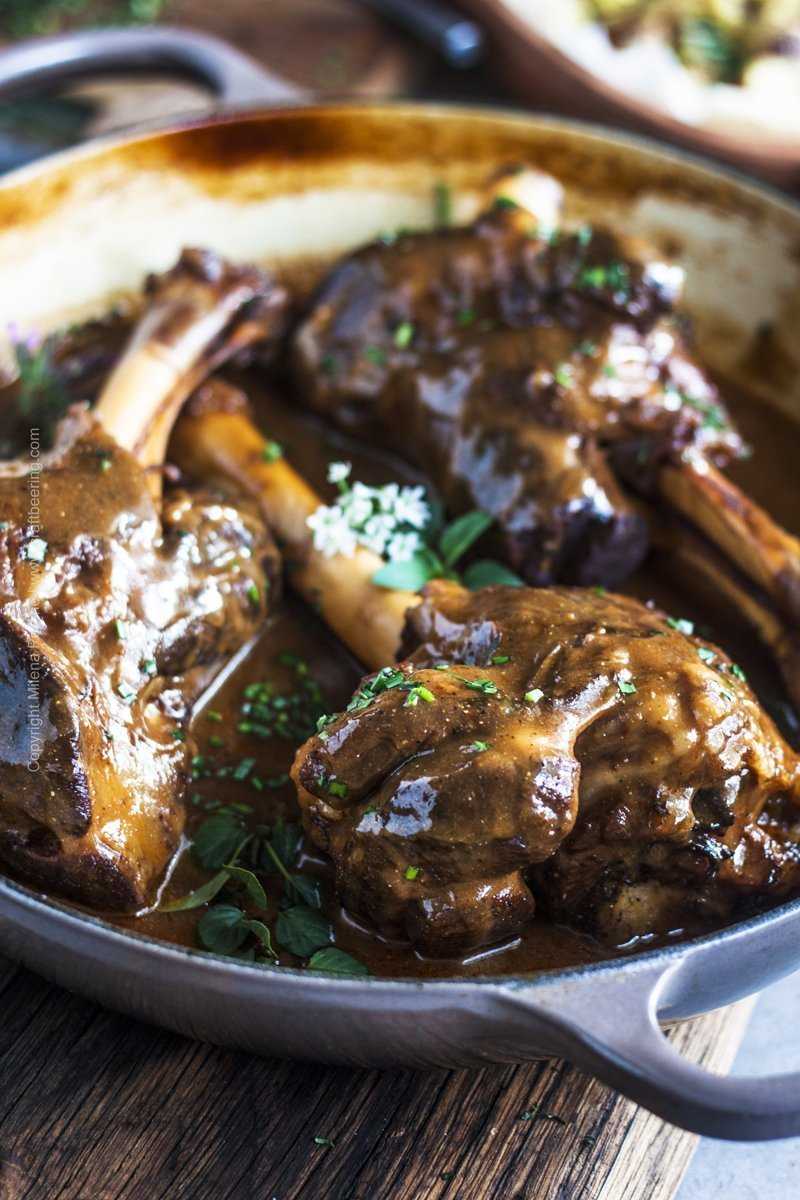 How to Cook Lamb Shanks

Lamb shanks are created for slow cooking at a low temperature. Their tough meat is rendered tender and juicy, the attached connective tissue melts away and yields its collagen, the bone marrow and the fat impart deep flavors.

For best results either slow roast or braise lamb shanks. We are very partial to braising and the subject recipe delivers succulent meat with a richly flavored sauce. Conceptually it is a very straight forward, classic braising recipe Chris has used again and again at work and taught me to use at home.

At the same time it is a recipe that gives you plenty of leeway to tweak the overall flavors by choosing different spices, herbs and a liquid base to create a flavorful braising liquid that tastes the way you’d like. 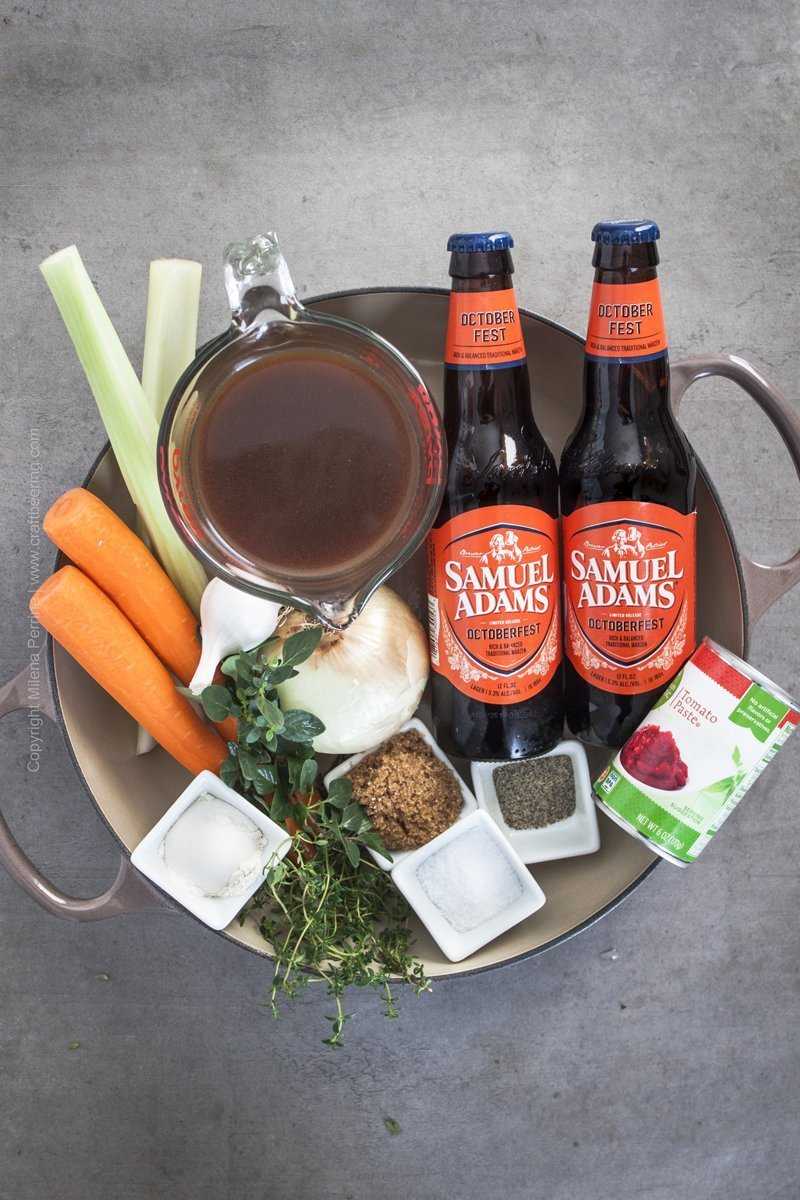 Braised lamb shanks are a classic dish served at the Wiesn in Munich during Oktoberfest. When seasonal Marzen lagers are available we love to use them in the braising liquid, otherwise rich, spicy red wines or porter ale are our top choices.

Lamb shanks. Already discussed in detail above, but it is worth noting that you don’t always need to budget a lamb shank per person (some hindshanks can weigh close to 2 lbs). Rather, go by the actual meat on the bones.

Vegetable base. To create a flavorful braising liquid you need to start by softening some vegetables. In this recipe we use carrots, celery ribs, onions (aka mirapoix) and several garlic cloves. You can also use leeks, shallots, green peppers, fennel.

Acidic ingredient. Tomato paste (used here) or a vinegar, such as apple cider or balsamic are typical. Balsamic in combination with porter ale (see Flavorful liquid below) creates a show-stopping dark gravy.

Flour. It is used as a thickener.

Flavorful liquid. Wine (both red and white), beer (lagers or ales), and hard apple cider are among the most popular ones used. Sometimes fortified wines such as port, sherry and spirits like brandy are added in small(er) quantities:). Note that wine is much more acidic than beer so use vinegars sparingly or not at all in combination with it.

Stock. Typically beef stock, but if you don’t have any around use vegetable or chicken stock.

Sweetener. To create balance use a bit of sugar (we prefer brown sugar) or maple syrup or honey. Fruit is often added to the braising liquid- raisins, plums, dates.

Herbs, spices and seasonings. In this recipe we use thyme, bay leaf and cumin. Oregano, rosemary and sage are great choices. You can also use the rich spices of the Middle East (cardamom, coriander, cinnamon, clove, nutmeg, star anise, even dried rose petals). A great strategy is to select spices that complement the aromas of the wine, ale, cider or spirit of your choice.

Mustard and slurry. Optional – if you want to make a gravy from the braising liquid. You will need a bit of mustard to act as an emulsifier (we recommend Dijon, it goes with soo many flavors) and a slurry (mixture of cornstarch and cold water) to act as a thickener. 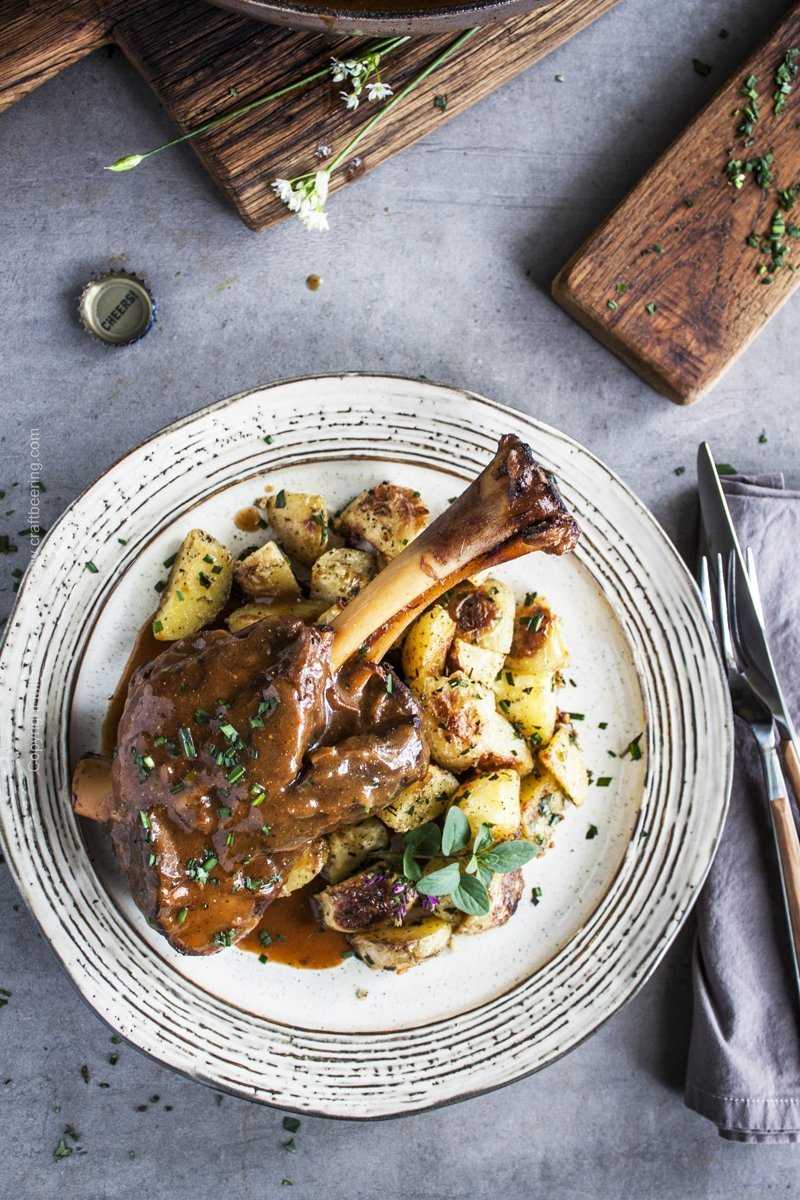 To braise lamb shanks you first need to sear them and then slow cook them in flavorful liquid, tightly covered so no moisture can escape.

NOTE: Measuring internal temperature is largely irrelevant in the case of braising. Even though lamb meat is cooked medium-well at 145 F the shanks will not be even close to the succulent, tender state they can reach after prolonged slow cooking. Simply don’t worry about the temperature and braise the shanks until they reach your desired tenderness.

How to Make a Gravy from the Braising Liquid

The image sequence below shows how easy it is to convert the braising liquid into a silky, gravy-like sauce.

In both instances you will begin by browning the shanks and creating the braising liquid in a large pan on the stove top. See recipe for details.

As I touched upon while discussing the key ingredients above, the braising liquid you create can be infinitely customizable. Besides the several ideas I mentioned you can also prepare lighter, Mediterranean inspired spring time versions of the dish.

To do so employ bright flavors from both the herbs and the liquid in which you will braise. For example a sweet white wine with citrus notes and preserved lemons, rosemary and garlic, some honey or sultanas for balancing sweetness.

The possibilities are truly endless.

How to Serve Braised Lamb Shanks

We love the first approach but truth be told we rarely eat all the meat, especially in the case of larger hindhsanks. Leftover meat makes for tasty gyros if reheated or can be added to bean stews or cooked lentils.

Garnishing with fresh herbs brings color to the dish and creates visual appeal (I have to admit that even though crazy delicious, gravy is not exactly delightful to look upon). 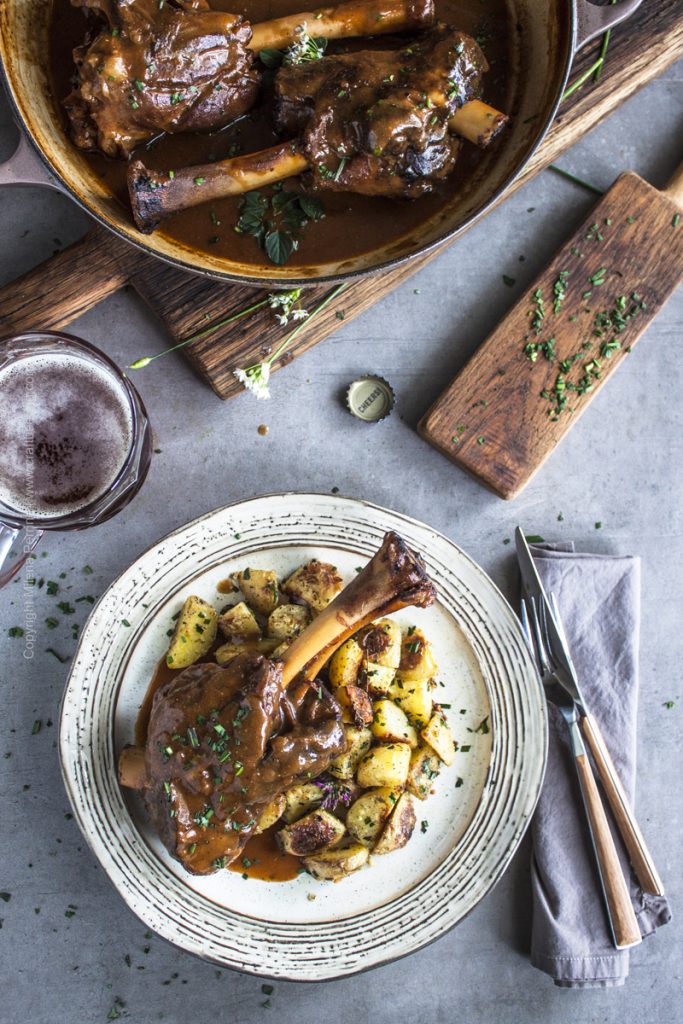 There are so many options for sides that I’ve named only the most popular ones.

As a rule of thumb – plan for a side that is compatible with the overall flavors of the braising liquid.

For Braiser or Dutch Oven

2. Clean and rough chop all the veggies and garlic and set aside. Pat dry the lamb shanks and season them well with salt and pepper.

3. Heat oil over medium-high heat in the braiser/Dutch oven (or a large heavy skillet) and sear the lamb shanks for about 2-3 mins on each side. Work in batches. Remove when nicely browned and set aside.

4. Lower the heat to medium and add the veggies and garlic, stir them and let them soften for 4-5 minutes. Add the flour and the tomato paste, stir and cook for one minute.

5. Deglaze with beer or wine, scrape all the brown bits from the bottom of the braiser (pan). Add the beef stock, the bay leaves, the thyme, the cumin and the brown sugar. Stir well, then place the lamb shanks into the liquid and increase the heat to bring to boil.

6. Cover with lid and place in the oven for about 2 hours. Check them to see how tender they have become about an hour and a half in and braise for as long as needed after that, until they reach your desired tenderness.

7. When the lamb shanks are done, remove them from the braising liquid (carefully, the meat will be very tender) and let them rest for a few minutes. Cover with aluminum foil to keep warm if needed.

1. Use a large, heavy skillet and complete steps #2 thru #5 from the Braiser/Dutch oven method above.

2. Very carefully transfer the braising mixture and the shanks to your slow cooker and cook on high until they reach your desired tenderness.

To Make a Gravy

1. After removing the shanks skim the fat on top of the braising liquid with a spoon and discard. Strain the vegetables and herbs using a sieve and discard them, reserve the liquid.

2. Heat the same pan where you cooked the shanks over medium heat, add the strained juices and the Dijon mustard and bring to simmer. Whisk to incorporate. Mix 1 tbsp corn starch with 2 tbsp cold water and add to the boiling liquid. Stir to thicken. Remove from heat.

Transfer to gravy boat or place shanks back in to serve family style.

*Note that the meat of 3 lamb shanks, especially if they are the larger hindshanks is sufficient to serve 3 to 6 people, depending on their size.

We are affiliates for Amazon and other vendors and qualifying purchases you make support our blog at no cost to you.