How to braise pork chops and create tender meat smothered in a delicious gravy with onions. 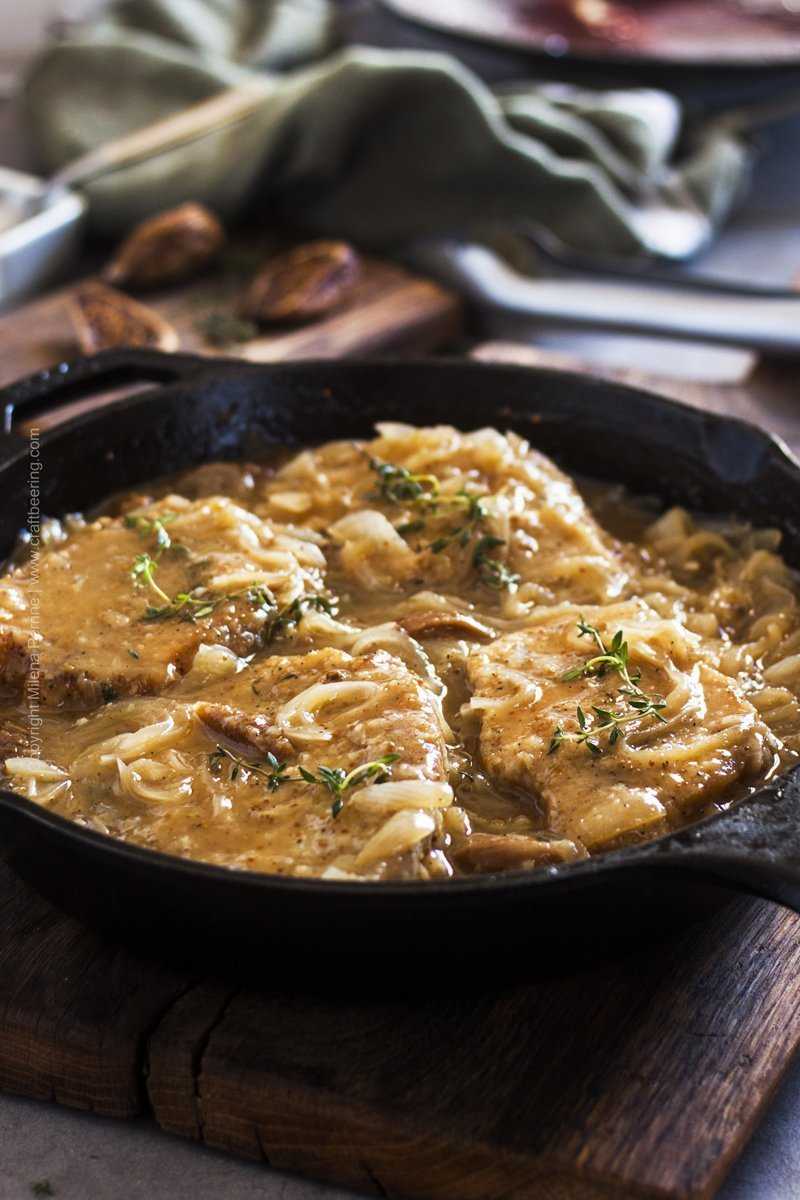 Go straight to the Recipe Card or
Read on for relevant information & step by step pictures and video (+ version with apple cider, about 2 mins)

This recipe is based on a homey Belgian cooking with beer specialty often served in the brasseries and cafes of Brussels. There the dish is simply called Pork Chops Brussels Style (Varkenskoteletjes op z’n Brussels) – the use of beer is a given. Apple cider or stock work just as well and you can use them instead.

We often add thinly sliced dried figs to the onions and ale to create a richer taste. They virtually melt into the braising liquid and contribute a rich, luxurious sweetness. 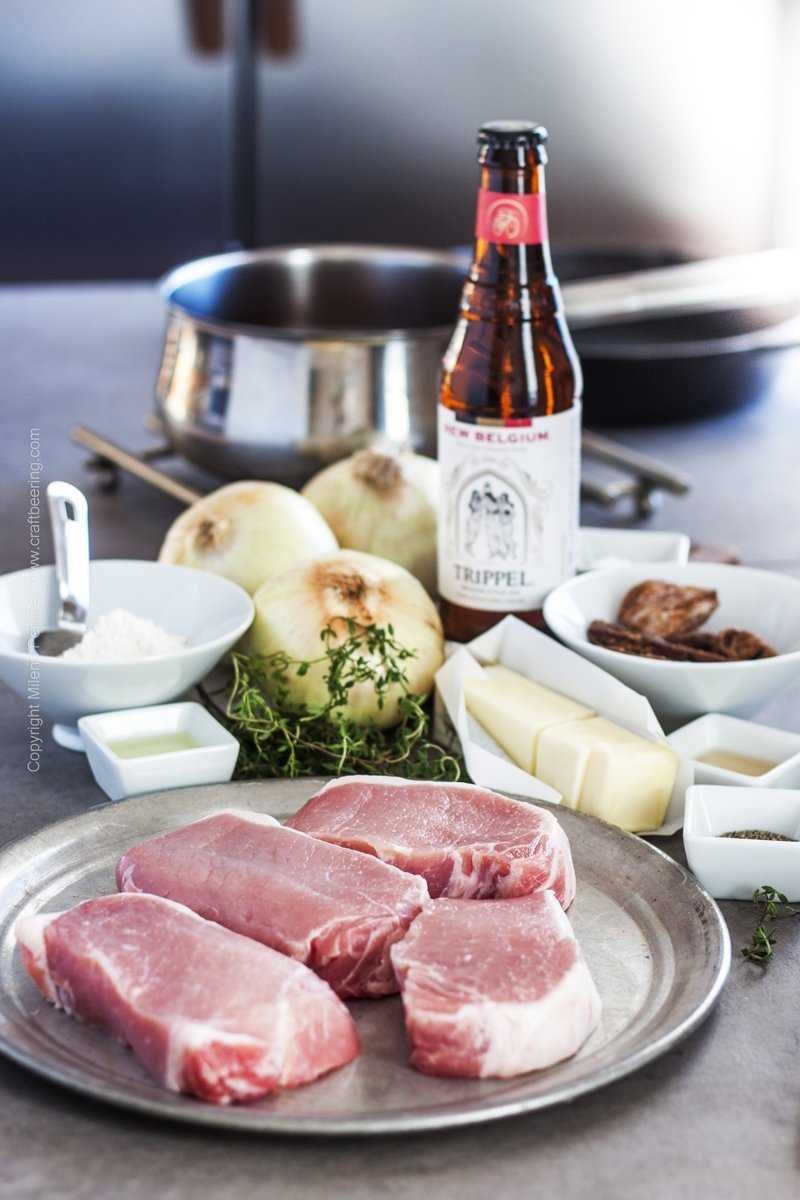 Understand the Cut of Meat

When it comes to braising pork chops typically the preferred type is boneless pork loin chops.

The loin spans the length of the pig, just underneath the fat back. Chops cut from the loin area closer to the shoulder have a bit more fat and tend to be juicier while those carved out from near the ham are leaner.

Lean pork loin chops such as the ones shown above are easy to overcook and become tough which is why brining them prior to preparing this recipe (or any other that calls for this cut of meat) is essential.

Brining increases the liquid content of the meat and also loosens its protein structures. As the chops cook, they retain more moisture and stay juicier.

TIP: Do not discount the importance of brining pork loin chops. Always brine if you have the time – the meat will be so much juicier. Look up the basic brine recipe Chris uses as a professional chef in the notes of the recipe card below. Brine for 2 to 12 hours for best results. 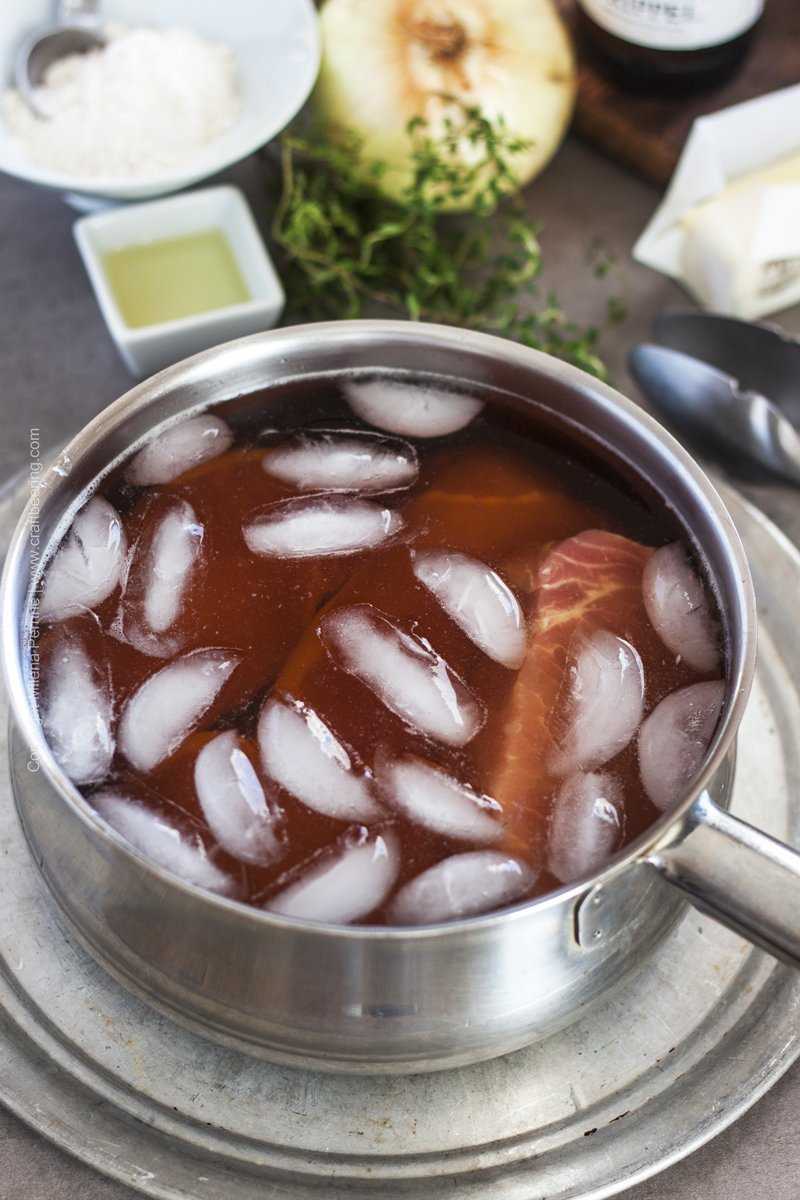 Ingredients for Braised Pork Chops with Ale and Onions

Besides the pork chops (and optional brine ingredients), gather the following:

How to Make Braised Pork Chops with Ale

The workflow for this dish is straight forward. All you need by way of equipment is a nice heavy skillet (cast iron or similar), a lid that fits it and your stove.

Prep all your ingredients before you begin – brine the chops (recommended), thinly slice the onions, pick the thyme leaves, if using dried figs thinly slice them in strips etc. and get to work.

Execute the recipe in exactly the same way but use hard cider instead of the sweet ale and substitute the dried figs with apple slices. No need to add brown sugar, cider is much sweeter than any Belgian ale. You also might want to use sage in place of thyme, or both. 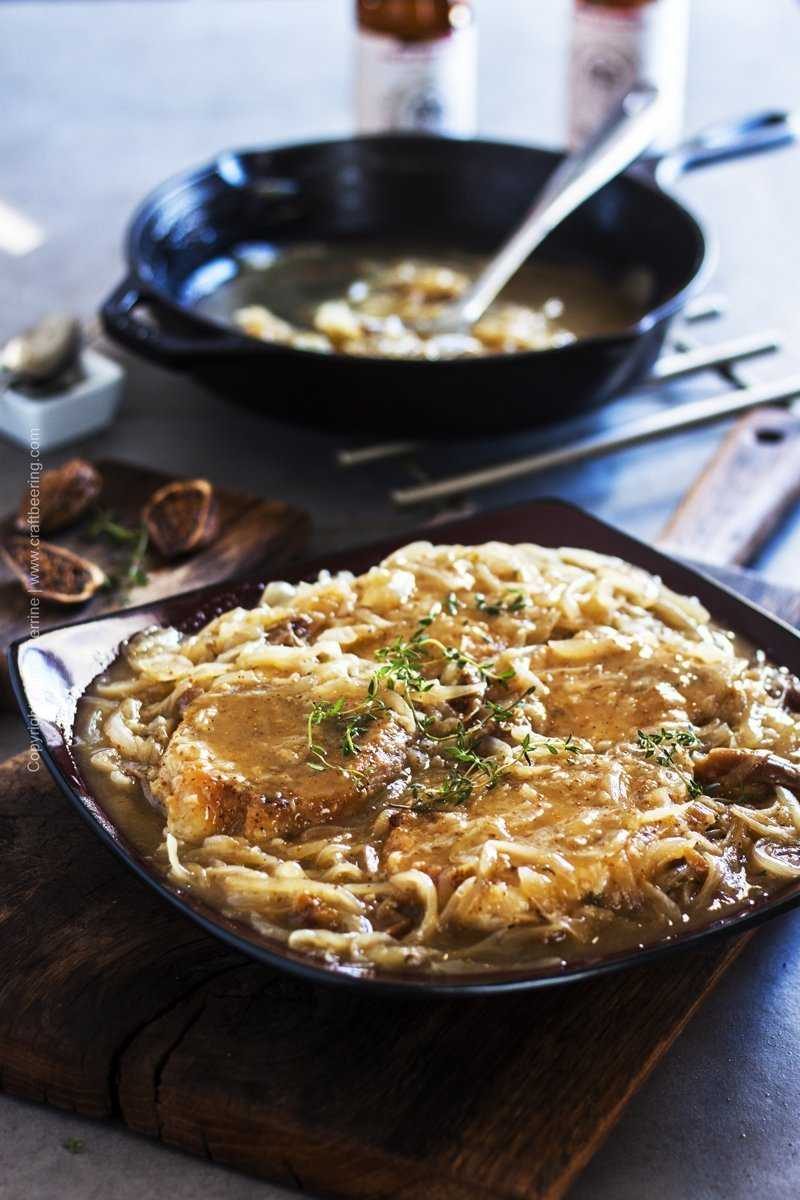 Possibly the greatest experience we’ve had enjoying these chops is served generously smothered with the onions and beer gravy and simply a piece of freshly baked, crusty rustic bread to mop up the deliciousness. Of course, washing it all down with a Belgian ale.

Mashed potatoes are clearly a contender here, as well as roasted potatoes and even fries. Rice pilafs or even simple, boiled white rice go well with this dish too.

Prepare a brine (optional) by bringing the water to a boil and stirring in the sugar and salt. Remove from heat and add about 2 cups of ice to the liquid. Place chops in it. Brine refrigerated for 2 to 12 hours.

1. When ready to cook, pat dry the pork chops and generously season on both sides with salt and pepper. Dredge each one in flour, shake off excess and set aside.

2. Over high heat heat a heavy bottomed skillet, melt butter, add cooking oil and sear the floured pork chops for 3-4 mins per side. Remove them from the skillet, set aside and lower the heat to medium.

3. Add the sliced onions, figs, thyme and salt and pepper to taste to the skillet. Stir nicely and let cook down for about 8-10 mins.

4. Deglaze the skillet with just a bit of the beer at first, scraping off brown bits from the bottom. Then add all the beer and stir everything together.

5. Place the pork chops on top of the onions, cover and simmer on medium for 10 to 12 mins or until the internal temperature of the chops reaches 145 F and the chops are springy when pressed upon. Be careful to not overcook them - they will become tough.

6. Move the cooked pork chops to a serving dish. Add the slurry to the braising liquid and onions and stir to thicken. Add about 1 tbsp of butter to create a silkier sauce (optional).

Remove from the heat and add vinegar or stir in some Dijon mustard (optional).

Smother the chops in the serving dish with the onions and the gravy or simply add back the pork chops to the skillet, cover with gravy and serve.

*The figs melt into the braising liquid and infuse it with their concentrated sweetness. If you don't have any handy add the brown sugar instead.

**You can substitute with cider, but in that case substitute the figs with a sliced apple. Do not add any sugar when using cider. You could also use beef stock and mushrooms as a substitute combo.

***Brining the pork chops ensures that the meat remains moist during the cooking process and is more tender.