A cheesecake and beer pairing that few would refuse. Even when the cheesecake has a bit of a non-standard character. Perhaps even more so if this is the case…When it comes to pairing beer and cheese, you’d be hard pressed to find really bad combinations, most beers work well with most cheeses, but there are certain matches that have a stellar affinity for each other. The higher the quality of the beer and the cheese, the better the pairing. Read on for four impeccable matches.

Hi, friends! It was Chris’ birthday earlier this week and we extended it to a few days as he was able to take some much needed time off work. The night before we left for a family skiing and craft beering trip I set up a cheesecake and beer pairing for him, featuring some of his favorite Belgian beers. Yes, I am totally calling my imperfect, somewhat clumsy looking cheese tower a cheesecake:) It was delicious and much appreciated. I can imagine it being a hit at parties (even if the drink of choice happens to be wine). 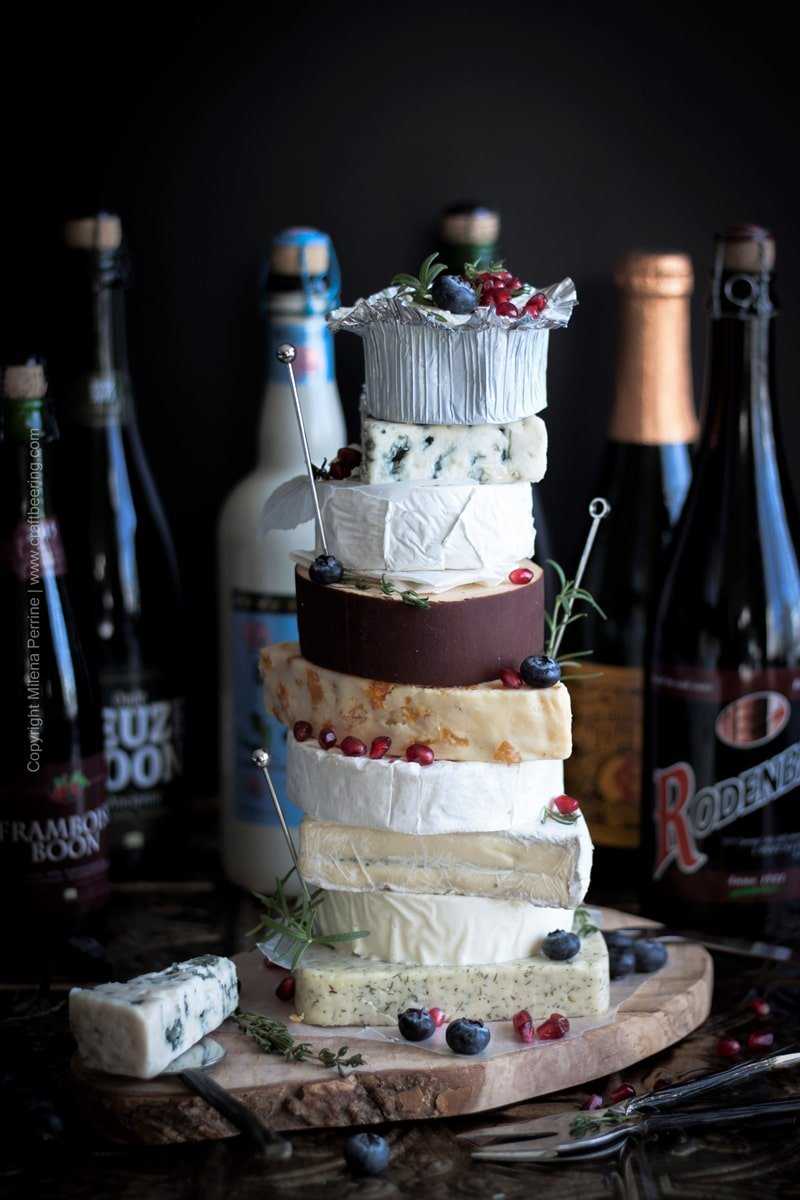 Let me start by introducing the participant beers. They are all Belgian and with the exception of one fall under the Belgian sour and wild ales category. Three of them are lambic, two are Flanders red-brown ales and one is a mixed grain Belgian blonde ale. They were all available in our local liquor store, I didn’t have to search far and wide for them and I believe that they are reasonably easy to find in the imported craft beer sections of larger liquor stores across the nation.

Lambics are spontaneously fermented beers, i.e. they are exposed to wild yeasts and bacteria present in the air of the Zenne Valley, Belgium. The very first ones are thought to have been made in the village of Lembeek, hence the name. There are several varieties of lambics. Some are fermented in the presence of fruit – Kriek (cherry), Framboise (raspberry), Cassis (blackcurrant) and Pecheresse (peach), while others, known as the style Gueuze are blends of young (one year) and old (over two years) lambics. Gueuzes are some of the most complex, elegant and ridiculously delicious beers on Earth. Both Chris and I would opt for a brilliant, effervescent gueuze over champagne if given the choice.

Flanders red-brown ales are the world’s most wine-like beers in terms of flavor and are often called the Burgundies of Belgium. They are fermented by blends of Lactobacillus bacteria strains and unconventional yeasts (usually proprietary to the brewery), then aged in giant oak foeders for two plus years. Typically, to round off the flavors, a young Flanders red is blended with a matured one (ratios vary) and the final product is a complex, rich, oaky tannins kissed libation with a pleasant astringency, balanced by fruity notes and a signature dry finish. A veritable delight for the senses.

The cheesecake and beer pairing I set up featured these particular beers. 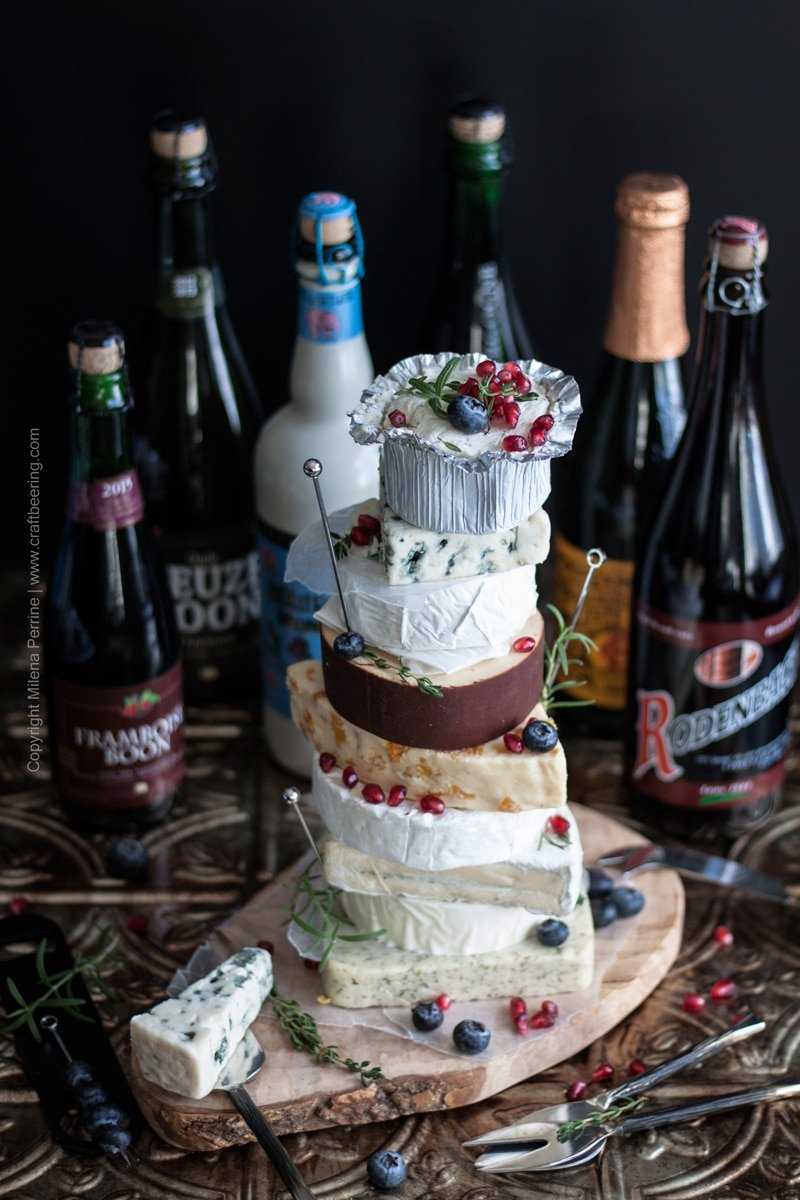 As to the cheese selection… I must confess that I picked the cheeses for Chris’ cheesecake and beer pairing gift in sort of hurry. I only had about twenty minutes to shop and chose from the assortment of a single store. I did select several of the cheeses knowing that they’d pair well with the beers I had purchased, but I also bought a few ‘filler’ ones so to speak, for the sake of constructing the cake (hey, nobody’s perfect).

From top to bottom the cheesecake layers you see are: 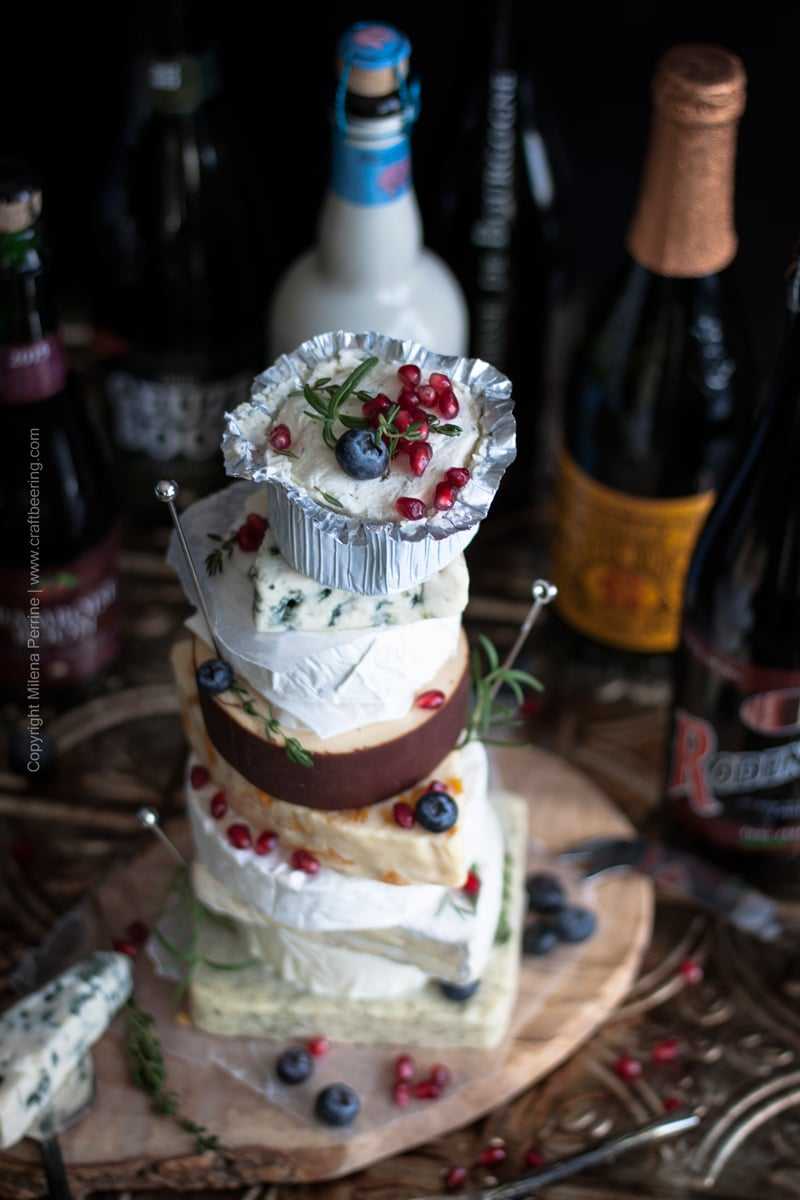 Clearly Chris and I alone were not able to even put a dent into this beauty on the night I presented it to him. On the following morning we carefully packed most of the members of the improvised cheesecake and beer pairing, placed them in a cooler bag and with all due honors transported them to the refrigerator of the condo in the mountains where we stayed for the duration of our impromptu vacation.

Every day after skiing we enjoyed (so glad that Chris shares:) a glass of Belgian beer and a few bites of cheese, followed by a soak in the rooftop hot tub, then hit a brewery on our way to dinner. Breckenridge Brewery was literally across the street from where we stayed and Outer Range Brewing Company and Vail Brewing Company a short drive away. It was a very relaxing vacation, rich in both exercise and indulgences. So grateful for unplanned (or minimally planned) vacation opportunities that turn into memorable experiences. And for our son being as smart, hard working and studious as he is wild and fun. His teachers never object to him being swept away by his parents to a vacation spot in the middle of a school week, with literally two days of advance notice. 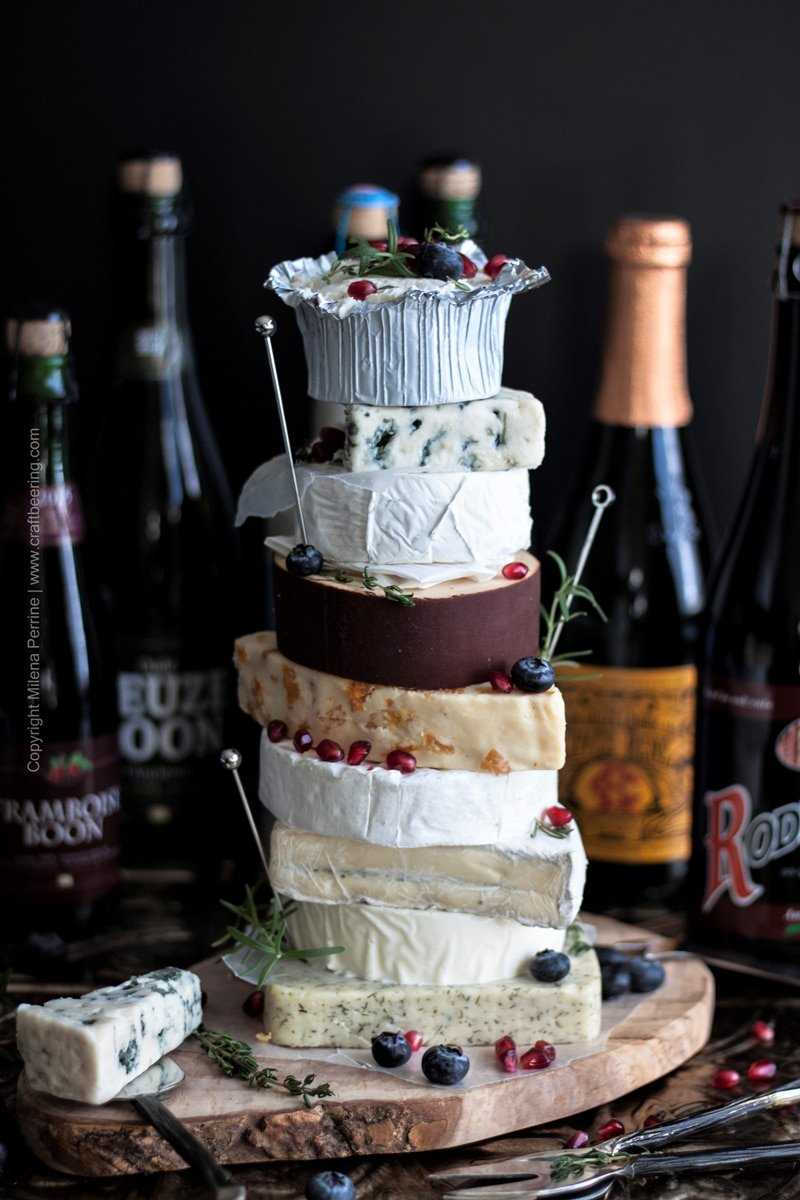 Saving the best for last, from the cheesecake and beer pairing members in this post, the most notable ones, the ones we urge you to try if you are looking for a delectable match of flavors are these:

But mostly, if you have previously shied away from Belgian wild and sour ales hurry up and try some. We guarantee that you will be happy to discover their divine qualities and while you are at it, why not construct a cheese tower and create your own cheesecake and beer pairing? We will definitely be including the concept in one or two future parties we’ll be hosting.

PS. It is a royal pain to spell ‘gueuze’, right? For the record, neither one of us is a fan of the spelling, just the beer:). 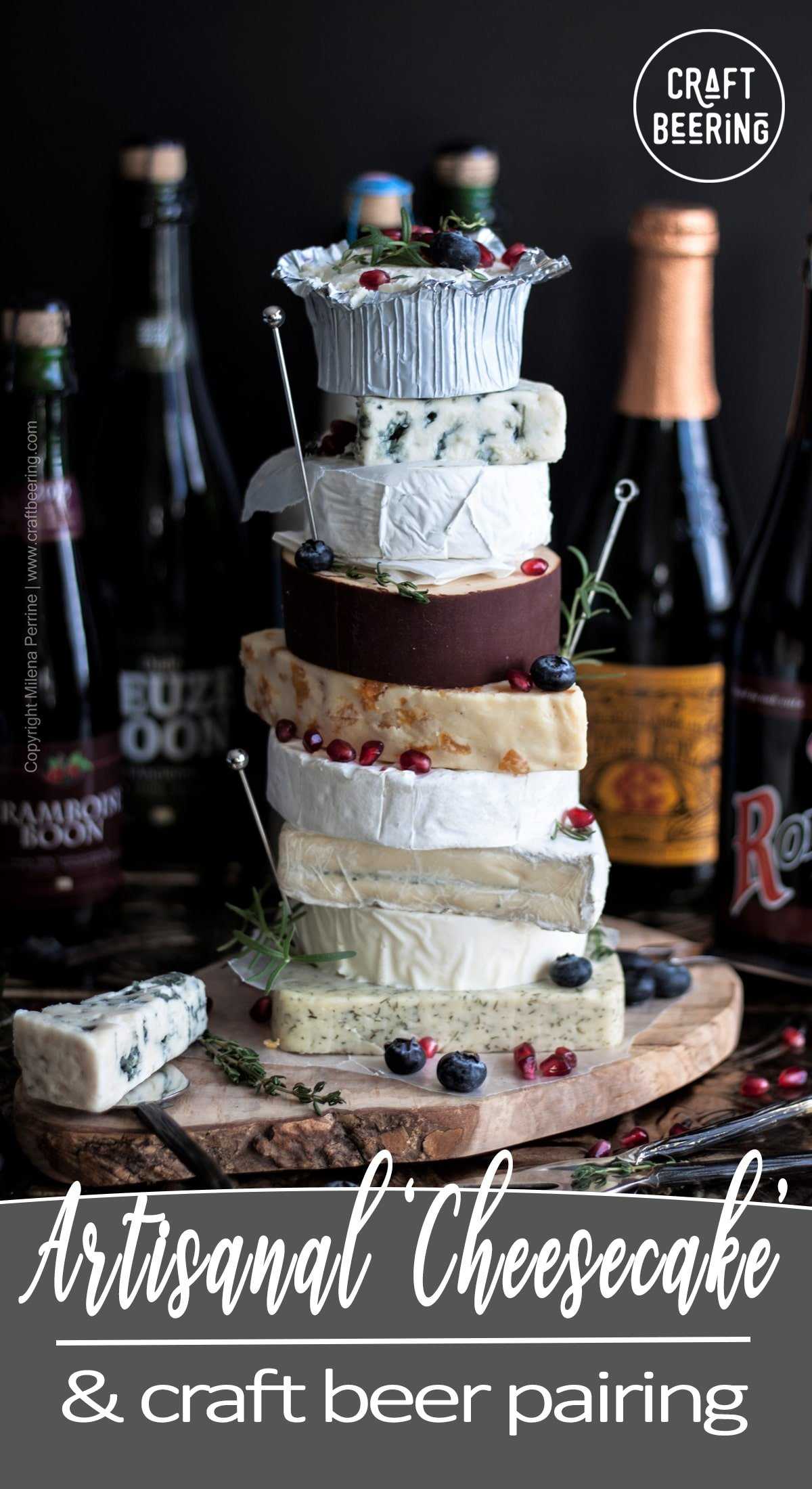