Simple, flavorful and easy to prepare – Padrón peppers are a classic Spanish tapa. We present the authentic Padrón peppers recipe and other variations. 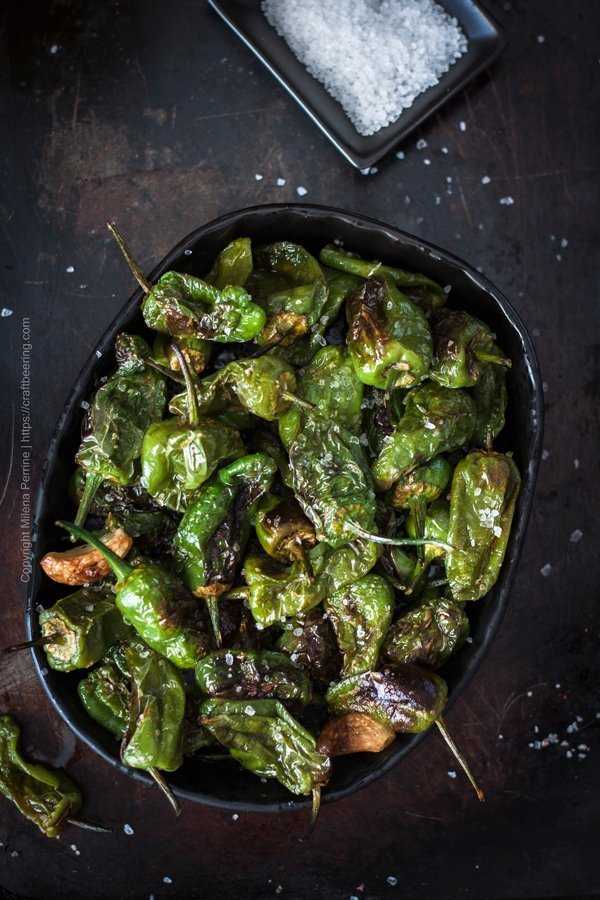 Pimientos de Padrón are a star among traditional Spanish tapas.

Jump straight to the Recipe Card

Padrón peppers are small, succulent green representatives of the Capsicum annuum species with an elongated conical shape. They come from Padrón municipality of the Galicia region in Northwestern Spain, hence their name, Pimientos de Padrón or Peppers from Padrón.

They were first grown from seeds brought from Mexico. Over the course of several decades they acclimated to the local soil and became the prized Galician heirloom pepper of today. Presently they are also cultivated in Southern Spain, Morocco, the USA, Canada, and Mexico.

Padrón peppers range from mild to quite spicy.

‘Some are hot and others not’.

Some of the small peppers contain more capsaicin (pronounced “cap-SAY-a-sin”), the compound responsible for heat, and are spicier than others. The people of Galicia often say that ‘some are hot and others not’ (in Galician  ‘Os pementos de Padrón, uns pican e outros non’).

In our experience the ratio between spicy and mild is 50/50, at least based on the ones we buy at Whole Foods.

NOTE: Padron peppers are not shishito peppers. Many confuse the two on account of the occasional hot pepper present in every small batch of shishitos but the two have distinctly different origins despite their common species link. Shishitogarashi are similarly tender and small, but are native to Japan and are generally sweeter.

How to Cook Padrón Peppers

In Spanish tapas bars and cervercerias (beerhouses) Pimientos de Padrón are traditionally deep fried in olive oil. Deep frying blissfully blisters their thin skins and softens their tender flesh. They are served to patrons hot, unpretentiously piled up in a steaming heap and seasoned with flakes of local sea salt – just like shown below. Simple is best. 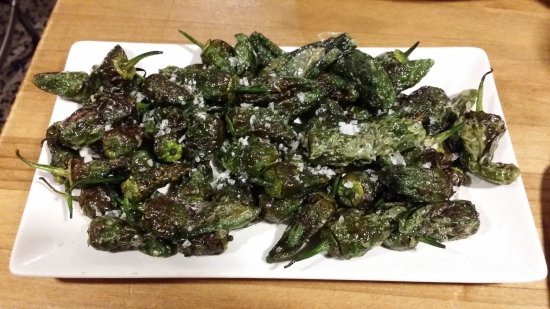 Picture courtesy of Surrey Coruña restaurant in A Coruña.

In home conditions you might not feel fascinated by the thought and cost of filling an entire fryer with olive oil. If that’s the case – simply choose one of the following two options for authentic tasting Padróns.

This method could not be simpler – it requires no prep work and only a short cooking time. 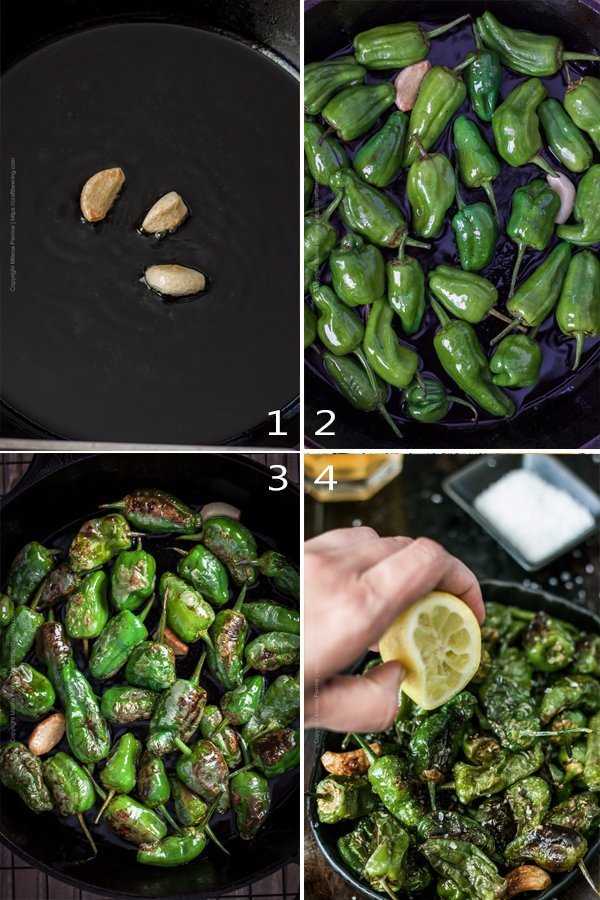 The Padrón peppers will blister, then puff up (due to their water content), and finally begin to wither and darken.

Other methods to cook Pimientos de Padrón include roasting them or grilling them.

If you roast them in the manner illustrated below they will taste very close to the pan fried version. And there will be way less oil splattering to worry about. 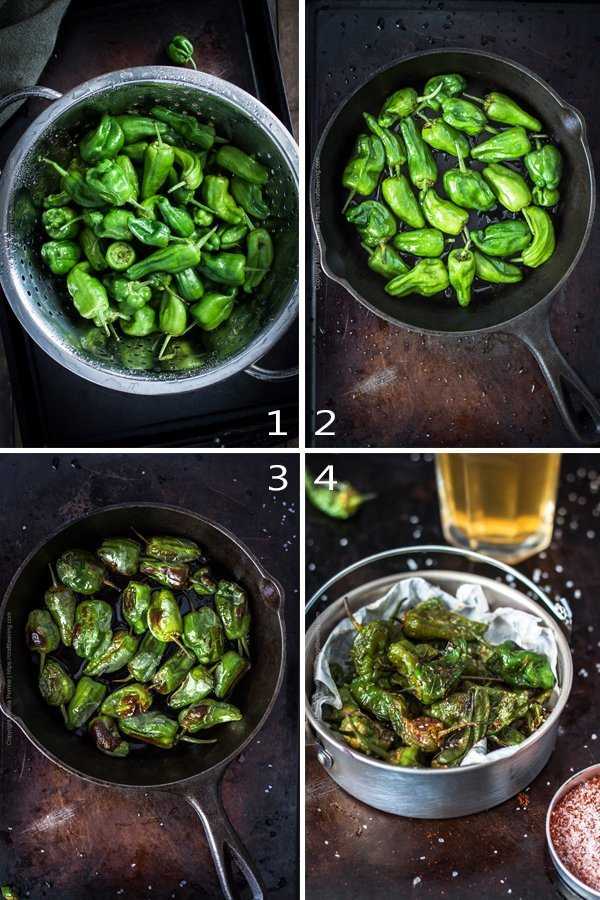 We like to mix Spanish smoked paprika with sea salt to season roasted Padróns – the subtle smokiness is very complementary.

Because they are so small we like to place our Padrón peppers in a grilling basket to keep them in one place and easily turn them around over direct heat. Makes grilling a breeze!

In Spain the sweet/spicy peppers are also served with fried eggs and potatoes (huevos rotos), stuffed with tetilla cheese (Pimientos de Padrón rellenos de queso) or as an accompaniment to other dishes.

*In the USA Padrón peppers are typically sold in stores portioned in baskets of 1 dry pint. A dry pint is a measure of volume used for fruit & vegetables and is the equivalent of about two heaping cups of Padrón peppers.

They are sooo good that we recommend you double the recipe even if there are still 2 people eating.

**For the pan frying method use a splatter screen to minimize the chance of splatter burns.

Where to Buy Padrón Peppers and/or Seeds to Grow Them

In moderate climates Padrón peppers are in season throughout the summer – starting in May and lasting into October. Expect to find them fresh at farmer’s markets across the country. You can even buy them by the pound directly from farms such as this one.

During the rest of the year they are imported from Mexico and are available at Whole Foods, ethnic produce outlets and other stores with more diverse organic produce selections.

If you want to grow your own you can purchase plants, Padrón pepper seeds or simply reserve and dry the seeds from a couple of fresh organic peppers and plant those. The typical cycle from planting to fruit is about 60 days. 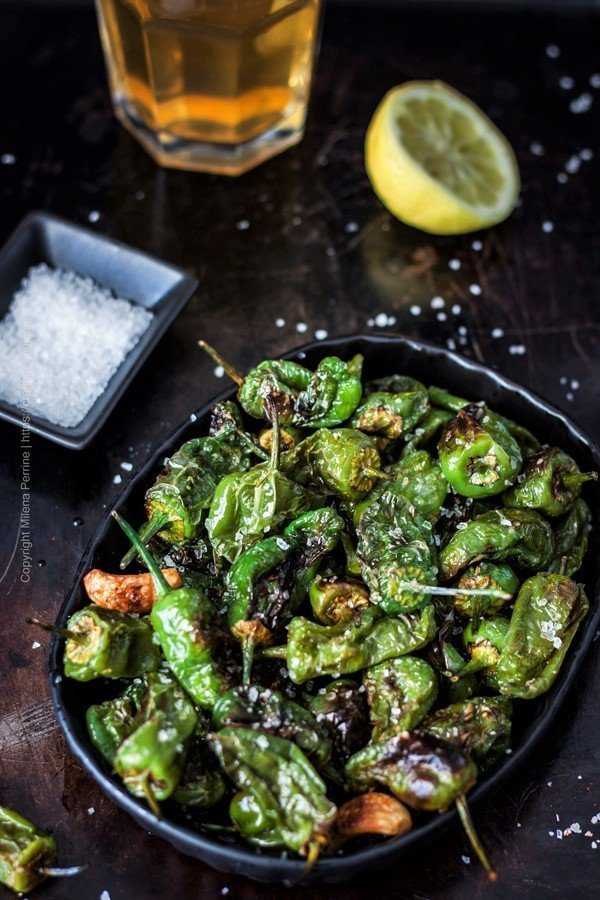 Craft beer is alive and well in the hip culinary center of Europe aka the North of Spain and Padrón peppers are commonly featured on the menus of local cervecerias.

Crisp pale lagers (such as Estrella Galicia from A Coruña) and amber lagers are quite popular in Galicia and perfectly support the flavor profile of the peppers. To that end look for Mexican lagers (in the Vienna lager style or pale versions) and crisp German style lagers (from pale to amber and dark ones like Munich Dunkel).

Not to miss are citrusy IPAs, for obvious reasons when it comes to their aroma and taste. All the styles referenced above will either balance or cleanse the spiciness of the chili heat and their good carbonation will cleanse the palate in between bites.