Chicken beersala is our delicious take on the classic dish made with chicken cutlets, mushrooms and Marsala wine. 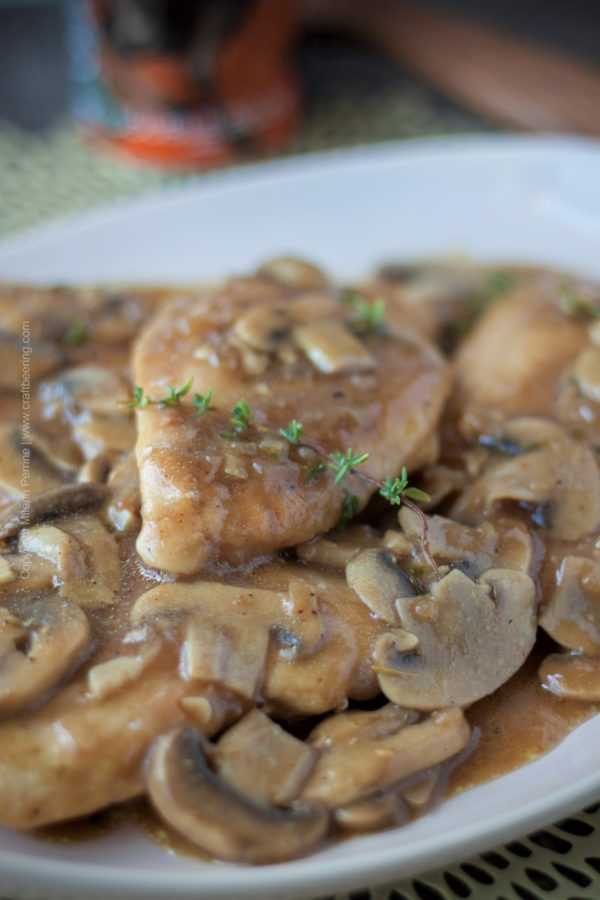 Leave it to us to infuse the amazing flavors of craft beer into a dish:). We take immense pleasure in introducing you to this Perrine original cooking with beer recipe.

Chicken beersala is so well suited for winter’s cold, dark evenings. Warming and bursting with flavor it provides a veritable embrace for the palate. And for the soul for that matter.

Truth be told, it is good to make during any time of the year, but especially so when it is freezing cold outside. The juicy chicken cutlets (they really do turn out juicy!) smothered in the rich, earthy and silky sauce are equally tempting served over mashed potatoes, angel hair or wild rice.

We recommend an extremely food friendly beer style to flavor chicken beersala – Doppelbock. Both boozy and sweet, Doppelbock lagers (Double Bock in translation from German) typically have intense malty presence and alluring toasty notes. Just what you’d want to ‘fold’ into a hearty sauce thickened by flour and turned lustrous by butter.

We used Devastator Double Bock brewed by Wasatch Brewery out of Utah – the first craft brewery in the state, started by a mid-Westerner in 1986. They have quite a rogue reputation (imagine starting a brewery in Utah several decades ago!!) and several sinfully good brews that we can now purchase here in Colorado. Devastator is very intense, everything a Doppelbock should be, with light nuttiness and somewhat creamy mouthfeel, which work perfectly for this dish. It has ABV 8% and just traces of an herbal bitterness that supports the earthiness contributed by the mushrooms. 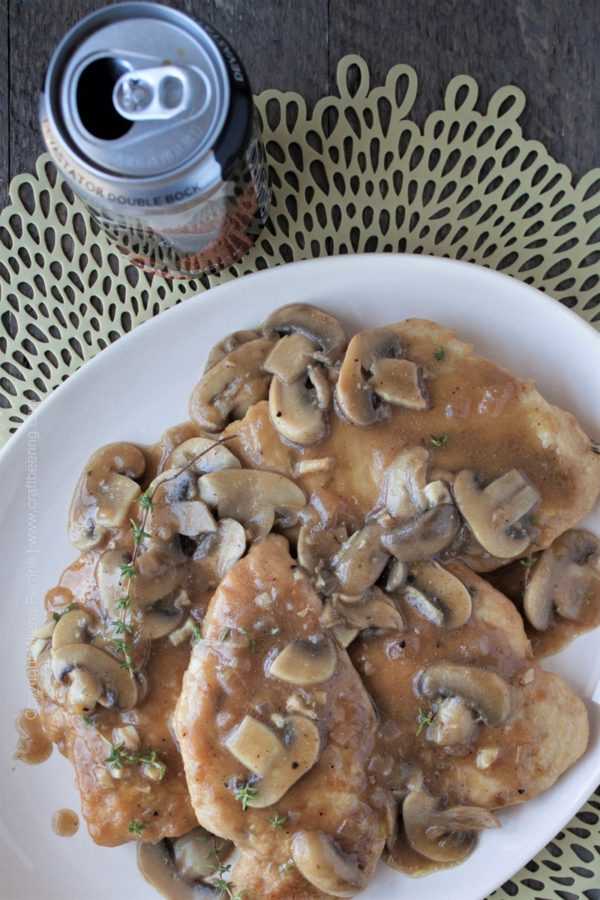 Of course, I am partial when I write this, but I prefer the flavors contributed by Doppelbock over those from Marsala. Especially the cooking version of Marsala wine most recipes call for, which has little in common with the fortified drinking wines from Sicily and does not bring the same rich caramelized flavors.

If you are really into earthy flavors, you can play them up in this recipe. By all means depart from the white button mushrooms we used for this version of chicken beersala. Go with porcini, or use creminis and add one or two dried shiitakes (reconstituted) and your sauce will be even heartier and nuttier.

Most recently Chris cooked up a creamy three mushroom Doppelbock soup with a ton of thyme in it and it tasted soo good that we almost didn’t want to share it with the friends who were staying with us for the weekend, lol. It was tasty, eaten in wooden bowls by the outside fire. Chris should have made a double batch though. And he will:) We commit to making that soup for the blog before winter is over. 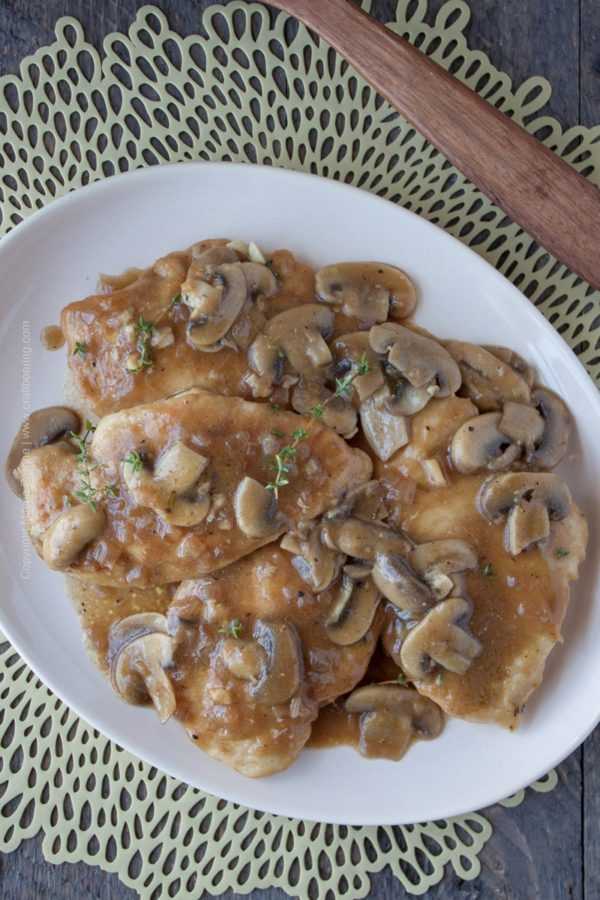 Another quick note – while chicken Marsala is typically garnished with flat leaf Italian parsley, we use fresh thyme for the chicken beersala. Much better combination. Think French onion soup and it’s basic flavor profile. Would you want it to have parsley or thyme?

Again…. this Doppelbock based sauce is so rich and satisfying, that we sincerely hope you will try our recipe. Typically I suggest alternative beer styles to use in our recipes, but for the chicken beersala we both feel that Dopplebock is the one that reigns supreme. Don’t deviate, you will be glad you didn’t. 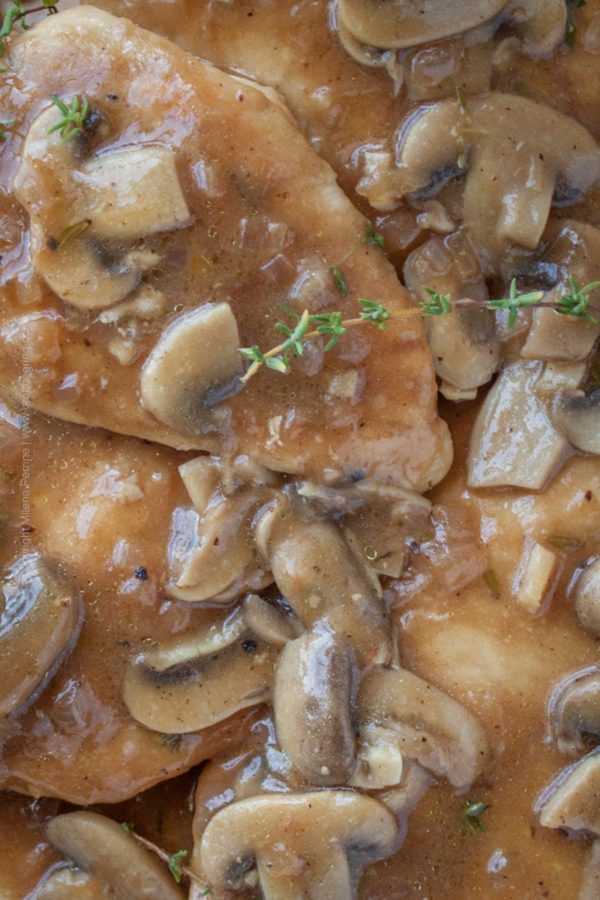 Leaving you with the full recipe and this short video (to convince you how easy it is to make a chicken beersala). Cheers, friends! To all the amazing flavors craft beer has to offer as a recipe ingredient.