How to make Choripán – the iconic Argentinian street food sandwich.

The Choripán, affectionately called ‘chori’, is at the heart of Argentina’s street food. It is a grilled Argentinian chorizo sandwich garnished with the country’s iconic sauce for meat – chimichurri and often salsa criolla, another popular topping for parrilla (grilled meats). In Buenos Aires and pretty much everywhere else you go in the country you will see the sandwich sold at food stalls big and small, at markets, at stadiums, beaches –  if there are people around you will find Choripán. Another sausage sandwich is the morcipán made with morcilla (blood sausage), but the chori reigns supreme.

Many Argentinians would say that if one went to watch a live football game and did not eat a Choripán it is af if they were never at the stadium. The chori represents so much Argentinians hold dear – carne asada (grilled meat), football (soccer), zest and passion for life.

What is Argentinian Chorizo?

Chorizo Argentino is a style of sausage, typically pork, but can also be a mix of beef and pork. Seasoned with a lot of pimentón (paprika grown in the Andes’ high valleys), fresh garlic and a bit of wine it is very juicy and flavorful.

Typically the chorizo is grilled, then split in two and grilled a bit longer before it is served nestled between two pieces of fresh bread such as a baguette or a deli bun. Generally it falls under the parrilla category.

In the US you can buy Argentinian chorizo at international markets or online at WildFork Foods. This is where we buy it and we recommend it based on our positive experience, no affiliate relationship whatsoever.

The ingredients for a Choripán can be grouped under the three main components – the bread and sausage, the chimichurri sauce and the salsa criolla topping.

This sauce is really brought to life by fresh oregano. While you can use dried oregano instead, the fresh herb provides a lot more zest and savory flavor. (We grow our own oregano year round because it is not a commonly found herb at the stores around us).

The rest of the ingredients are flat leaf parsley, a couple of green onions (or a shallot), red pepper flakes, garlic, vinegar, oil, lemon juice and salt and pepper.

This simple tomato onion salsa is like a fresh relish which adds sweetness and savoriness to the sandwich. It is more commonly used as a topping for other grilled meats but is often added to Choripán. Many versions of it include diced red and green peppers – feel free to add them to taste. Make it with tomato, onion, lemon juice, vinegar, olive oil and salt and pepper.

Grill. Grill the chorizos over medium heat, turning often, until they are uniformly cooked all around. Slice each one lengthwise and grill the flat middles until they get nicely browned. Place the bread near where you have the sausages to warm it up and impart subtle grill marks.

Assemble. Slather a bit of chimichurri on each side of the bread, place a couple of chorizo halves in the middle, top with salsa criolla and a bit more chimichurri and enjoy. 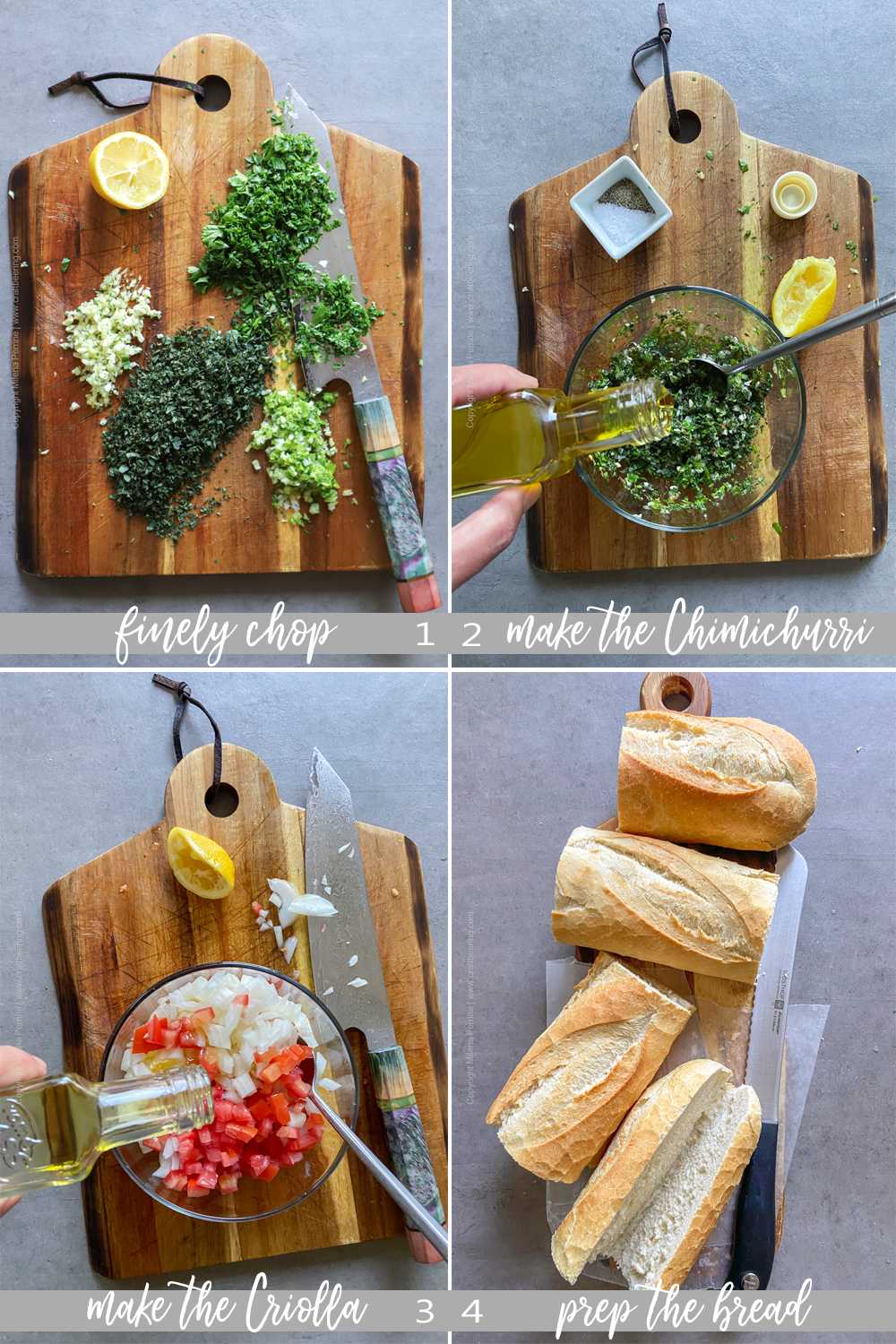 Grilled meat sandwiches always go well with a cold beer, but this one simply begs for a true to style Czech or German pilsner or a crisp American craft lager. The more herbal hoppy bite and bready notes, the better the pairing. The more effervescent your beer, the better it stands up to the rich sausage.

*If you buy yours from WildFork Foods (we do, this is not an affiliate mention) they are a bit small, so three half sausages are a good serving per person. If you buy them elsewhere and they are bigger it may be that you only need a single whole sausage per person (two halves).

**Substitute with deli rolls or other suitable bread.

***Feel free to add a bit of green and/or red bell pepper, diced small, both are sometimes included in salsa criolla.