How to cook a bavette steak. Enjoy the robust flavor of this exceptional butcher’s cut of beef. 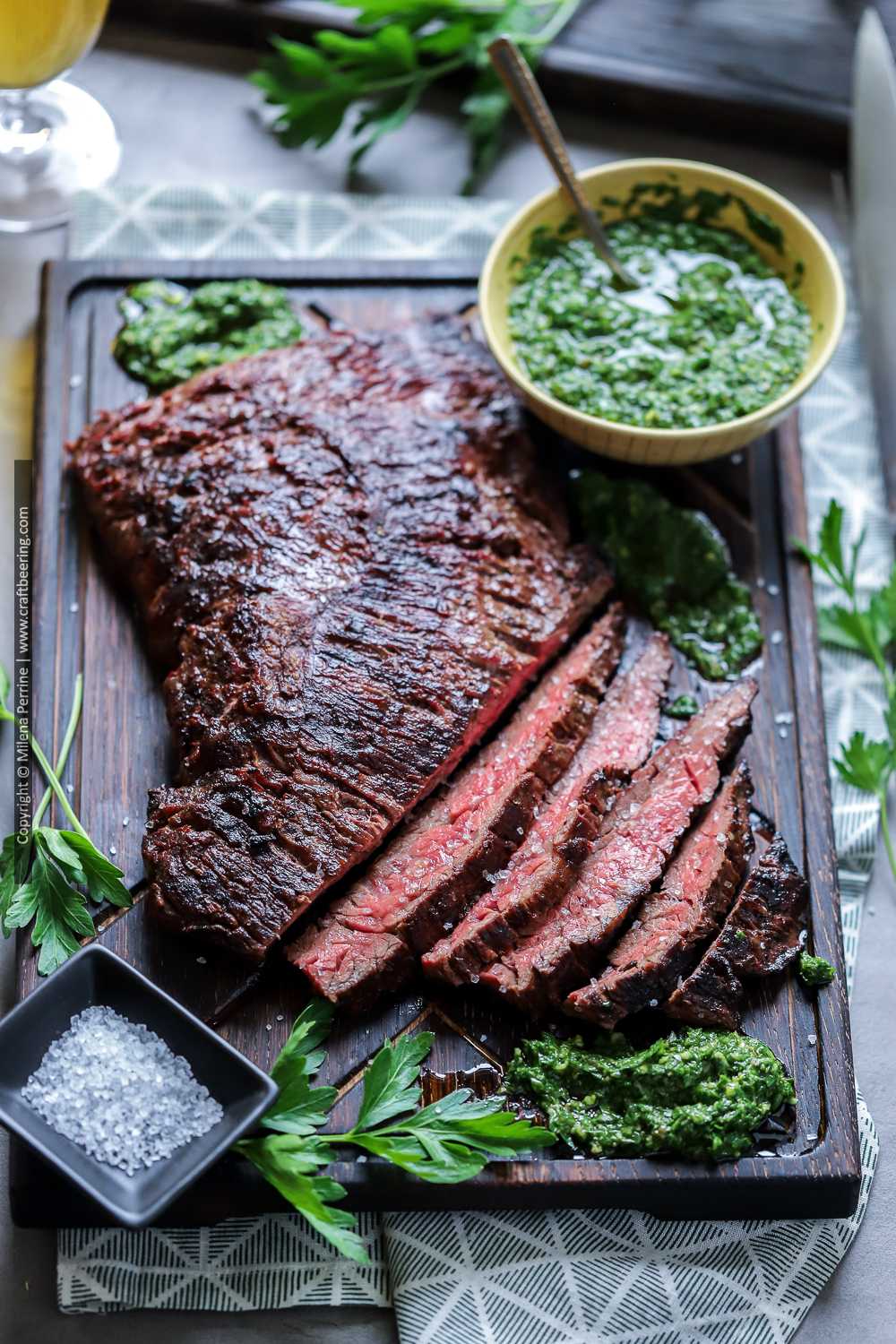 What is Bavette Steak?

Bavette steak is a large flap muscle from the boneless flank beef primal. Its role is to support the animal’s viscera along with a couple of smaller muscles on the side of the belly.

The muscle is also known as flap meat but the French word bavette, which translates to ‘bib’, more accurately describes its broad and flat shape.

Pictured below is a whole bavette flap, which typically: 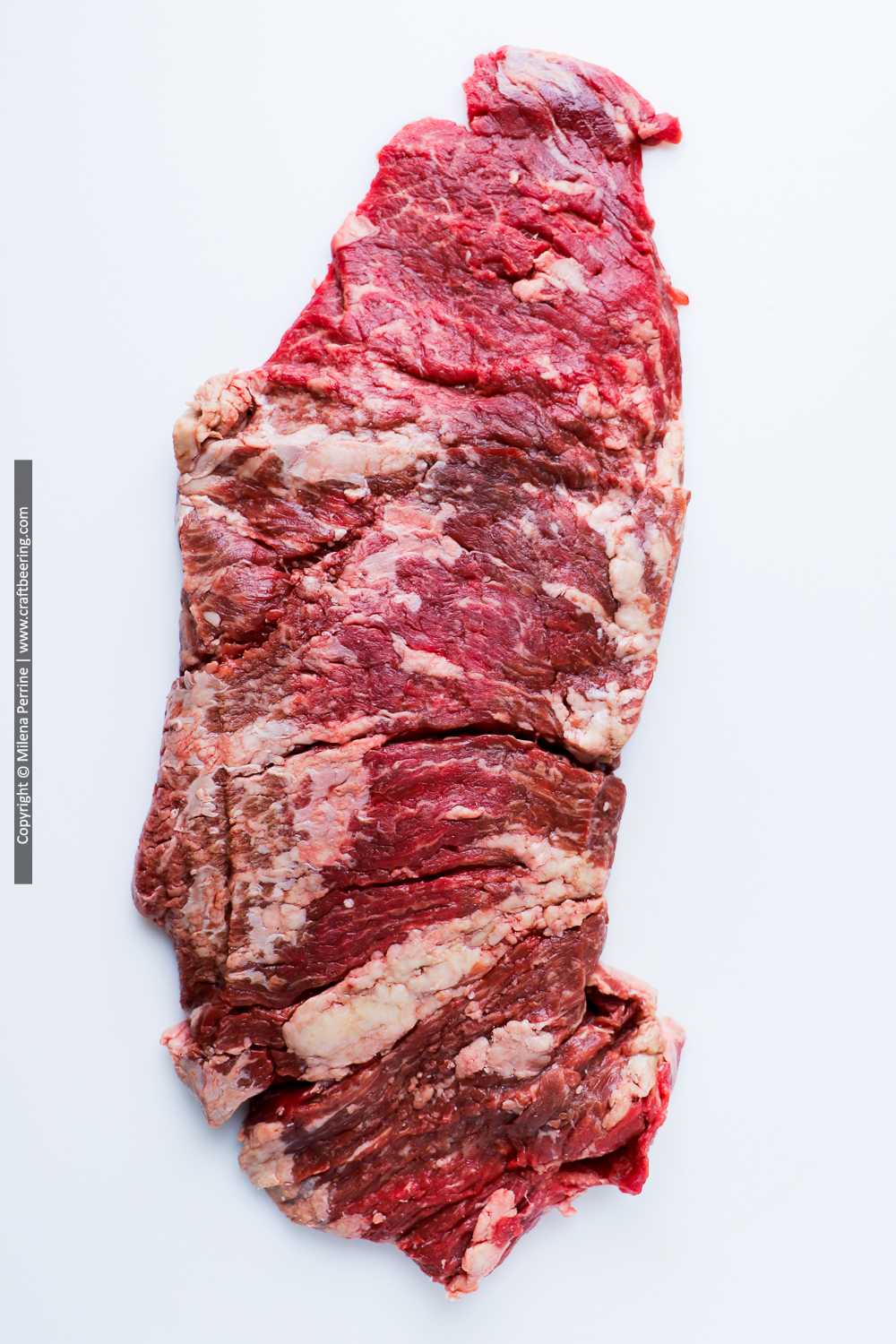 Other Names for Bavette Steak

This delicious beef cut is also known as sirloin flap steak, being derived from the bottom sirloin butt. Other names include flap steak and sirloin bavette.

Buy the right cut. Bavette is often confused with flank steak, which it is not. The two are located adjacent to each other, but flank is dryer, smaller, without any fat and with fibers that run along its length. Be sure to buy bavette from a butcher that knows his cuts well.

Grade matters. This cut will taste best when USDA Choice or Prime beef. Also, make sure that not all the fat has been removed as the steak lacks internal marbling.

NOTE: Although bavette is a delicious steak, the nature of the cut requires aging in order for the meat not to be chewy. An industry standard is twenty-one days. Very tender examples have often been wet aged up to forty-five days.

There is a saying among butchers that bavette sits at the apex of the flavor and price ratio. Bavette steak has a robust beefy taste that rivals that of ribeye. Because it is leaner its flavor often comes through even stronger than ribeye’s.

What is the Best Way to Cook Bavette Steak?

Grill. Grilling is by far the best way to cook a bavette – whole or smaller portions of it. On the grill it forms a beautiful crust and if using charcoal it takes on the delicious aromas from the wood.

Stove top. If you would like to cook bavette on the stove, the best approach is to cut the whole piece into thick steak strips – with the grain.

Searing the smaller pieces in a skillet is much easier and also addresses an issue with the open grain texture of the meat. Open grain releases a lot of water and if you try to cook the whole bavette on the stove top there is a high chance that it will steam in the pan instead of form an appetizing thick crust like it does on the grill.

Prep. Before you grill this steak you need to make sure that you have brought it to room temperature. While you can marinate it (we like this beer marinade for steak), you can simply use kosher salt to liberally season the outside. 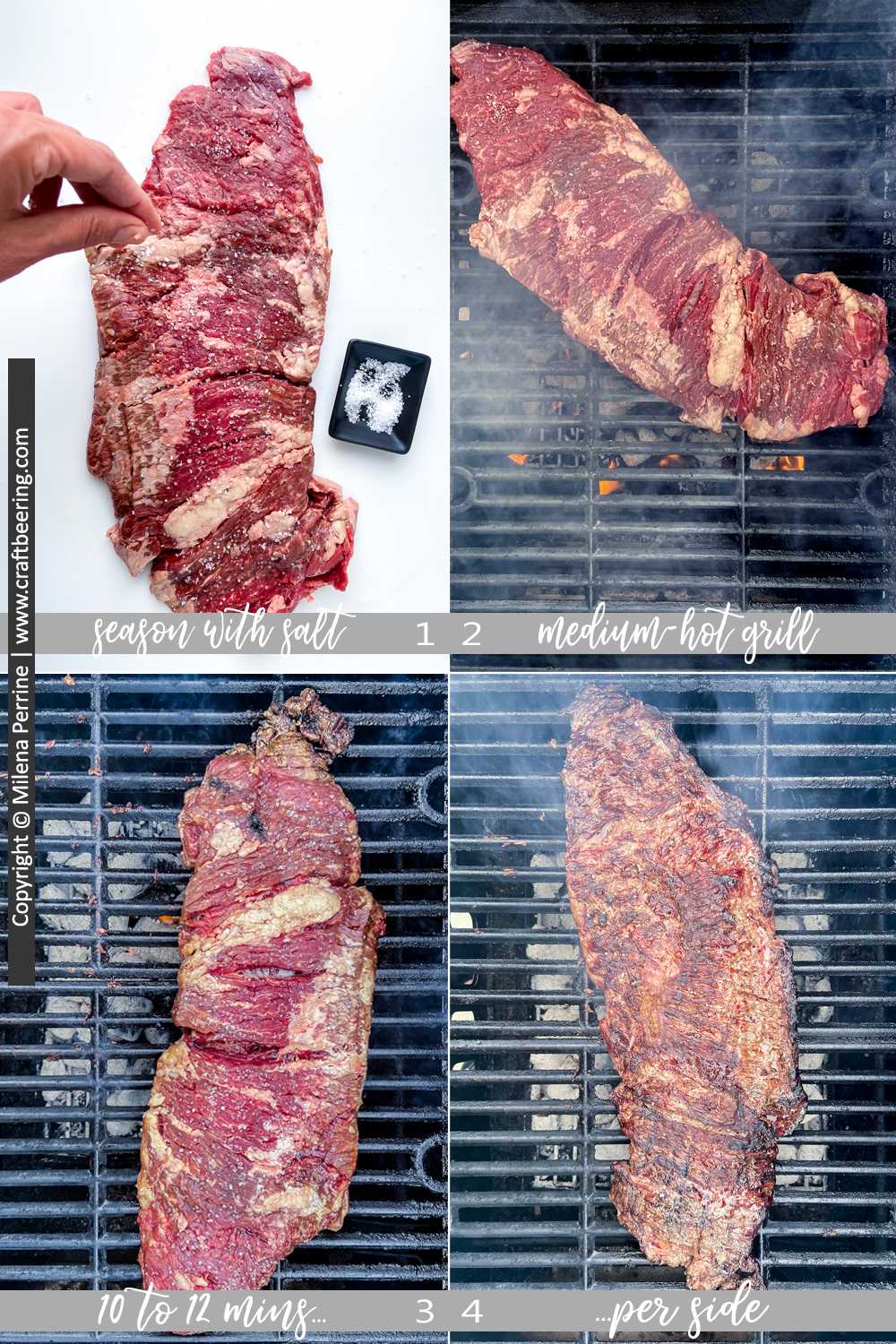 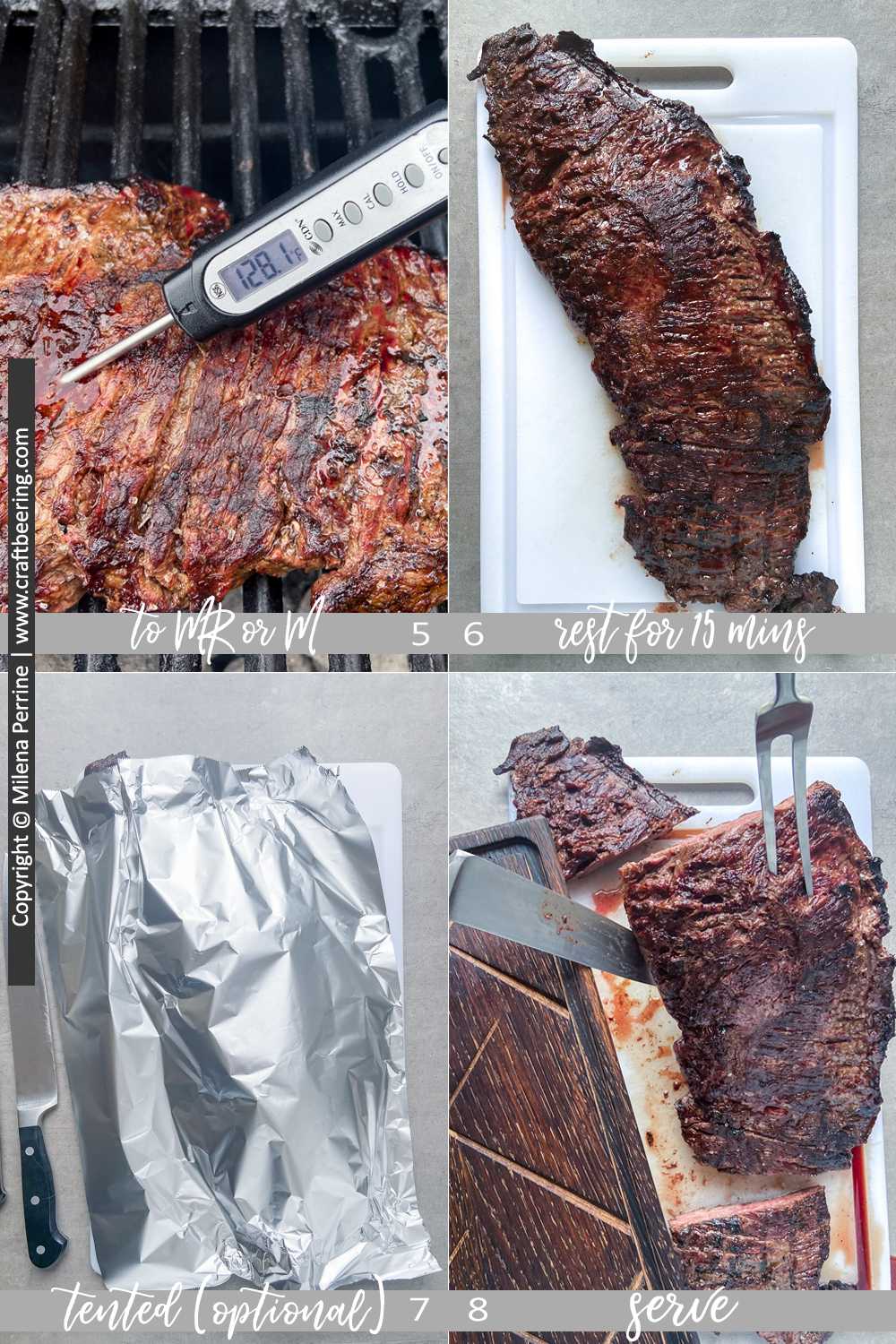 To What Temperature Should You Grill Bavette Flap Steak?

The ideal temperature to cook bavette to is medium-rare to medium. Our preference is a solid medium-rare. If cooked only until rare it will be too chewy, even if it has been aged sufficiently.

Note that there is a difference between when the steak should be removed from the grill or skillet and the final serving temperature.

While all beef steaks benefit from rest time, in the case of bavette, especially when cooked whole, resting is crucial.

Due to the sheer size and thickness of the cut allow at least 15 minutes of rest in order for the natural juices to be retained and tenderness increased. You can rest it in a very low heat area of the grill or onto a board, loosely tented to keep warm.

How to Slice This Steak Against the Grain 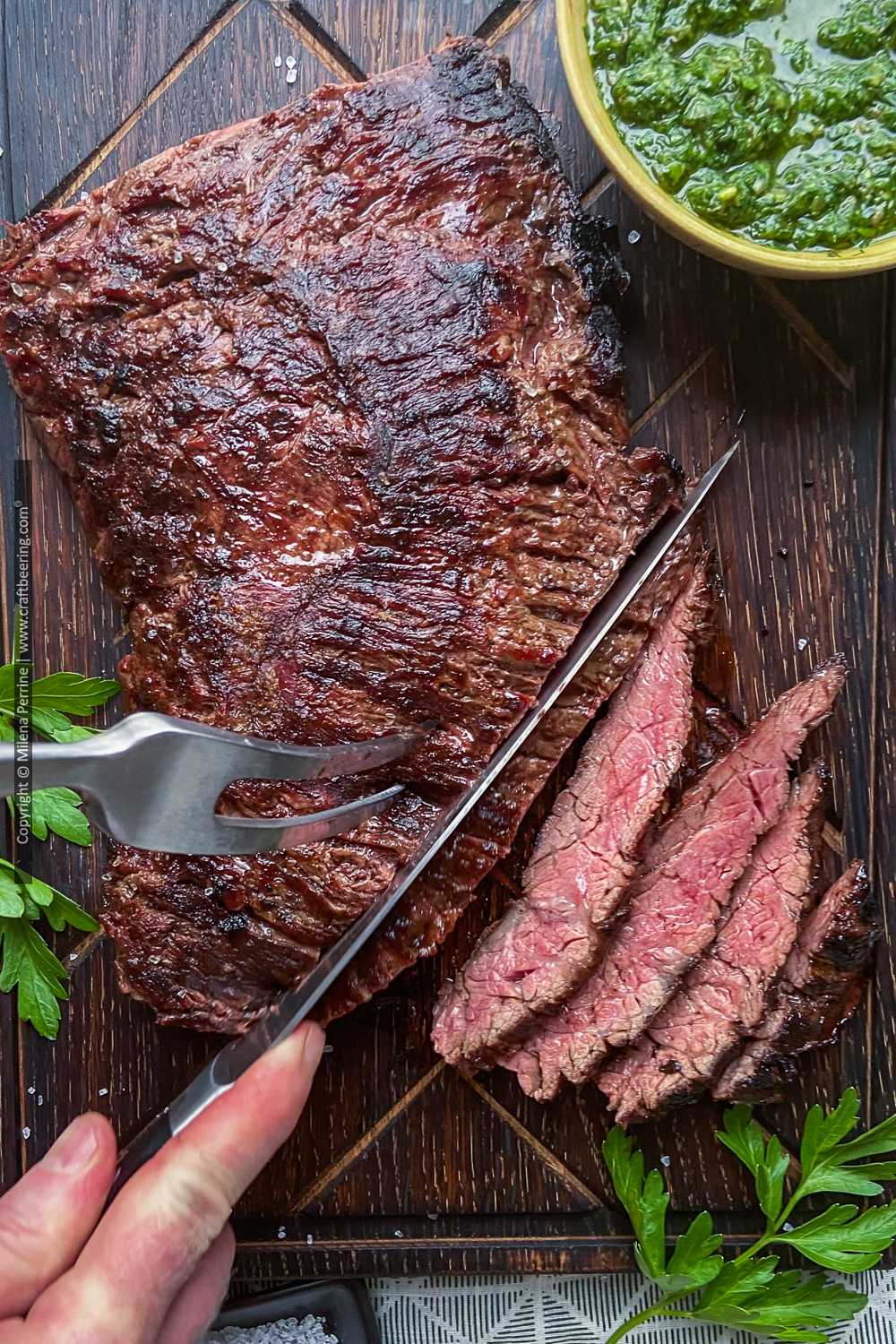 *Feel free to first remove the thinner ends of the bavette as they are likely slightly overdone. Reserve them for extra servings or to quickly reheat for another meal of fajitas or tacos.

Use a meat thermometer to take the internal temperature of the steak. Do not cook this cut rare (will be too chewy) or beyond medium (will become dry).