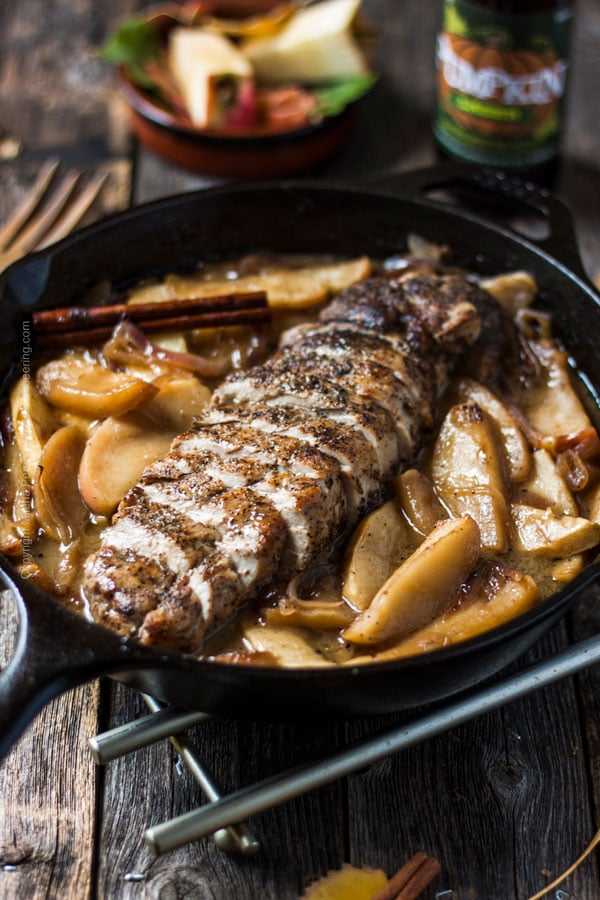 What You’ll Need to Make Apple Pork Tenderloin in Oven

Just a few simple ingredients as a matter of fact and a cast iron skillet and you will be on your way to the glory of pork tenderloin with apples and brown sugar.

You could also prepare the dish using a slow cooker and we include instructions on how to do it in the recipe card.

TIP: Pumpkin beer as the liquid of choice adds so much flavor. It is rich with intense spice notes and sweetness and beautifully brings out the flavors of the pork. 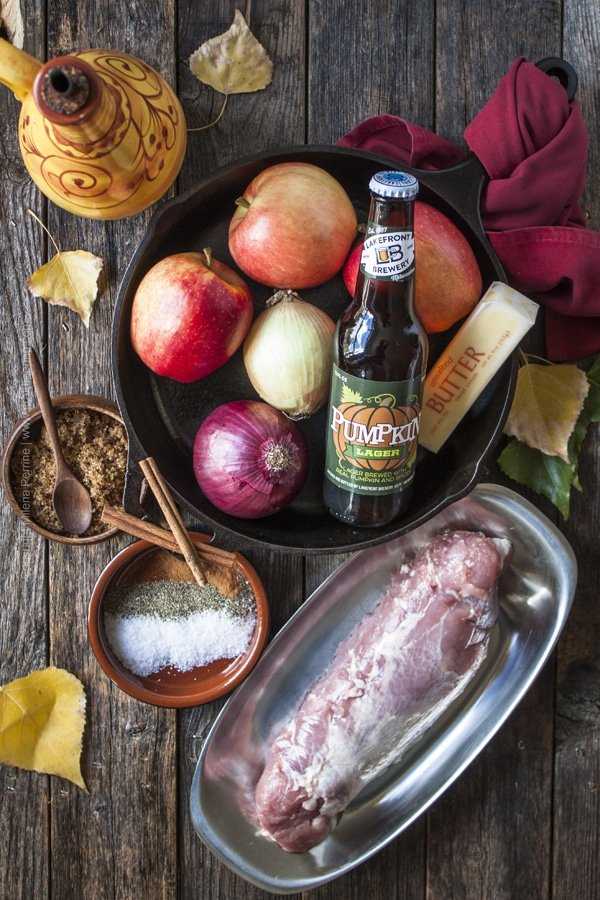 NOTE: If cooking a larger piece of pork tenderloin you definitely need to use a larger heavy bottomed skillet and increase the rest of the ingredients (simply click on the servings number in the recipe card below and slide the bar, the ingredient amounts will adjust. 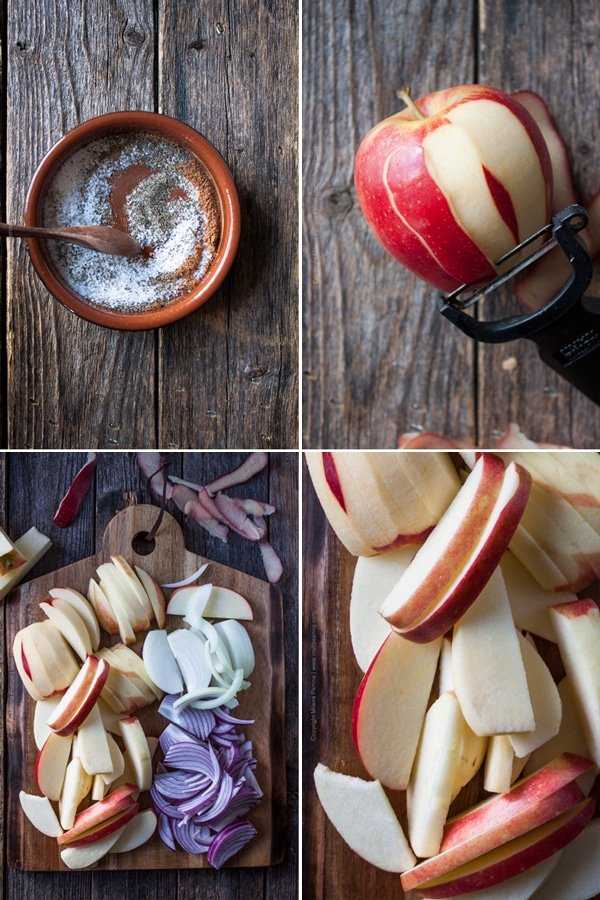 Before you proceed with the steps involving the apple pork tenderloin, we recommend that you remove the silverskin. This is common step with several cuts of meat.

The silverskin is that thin, white membrane layer you can see in the ingredients picture above that covers the side toward the end of the pork tenderloin. It is helpful to remove it because it shrinks with heat and pulls on the pork causing it to twist in a bow shape. 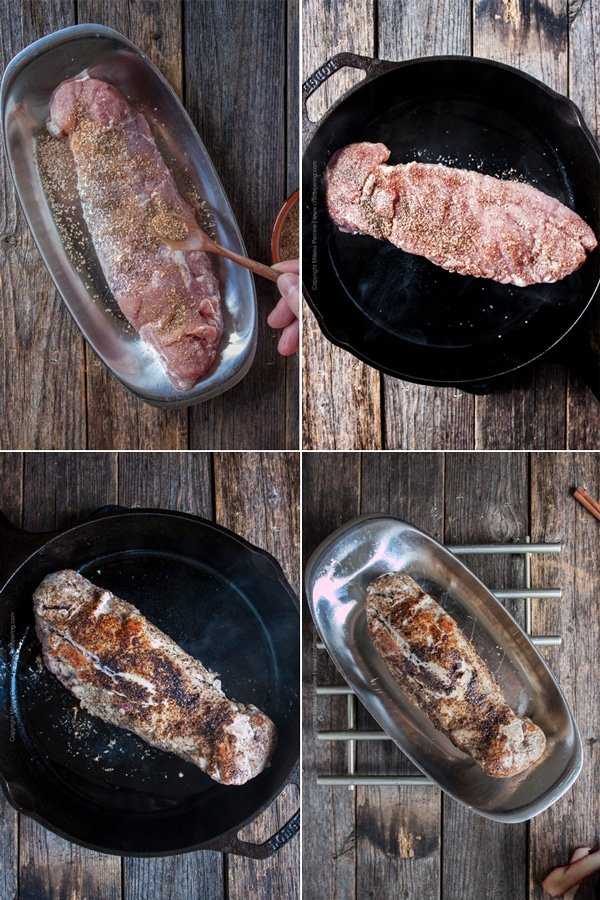 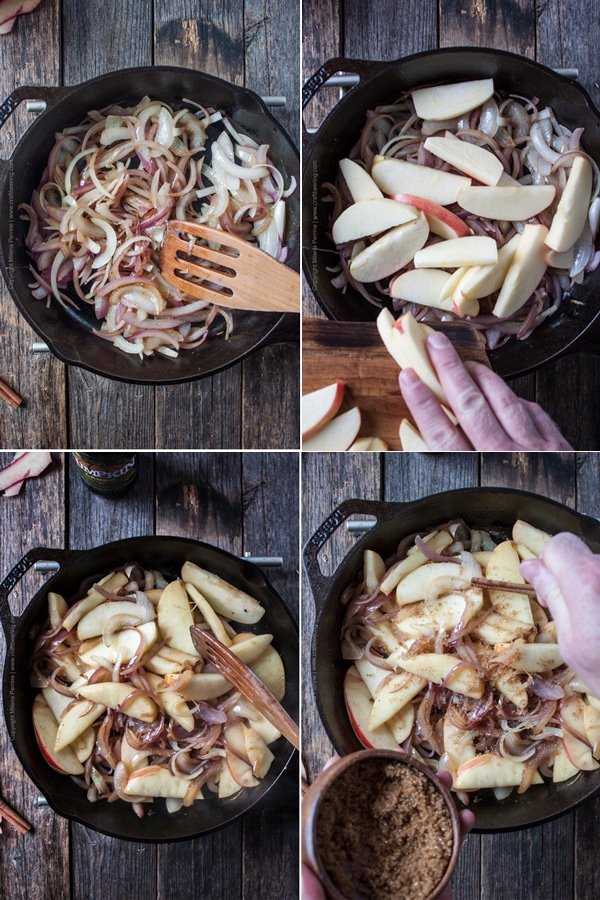 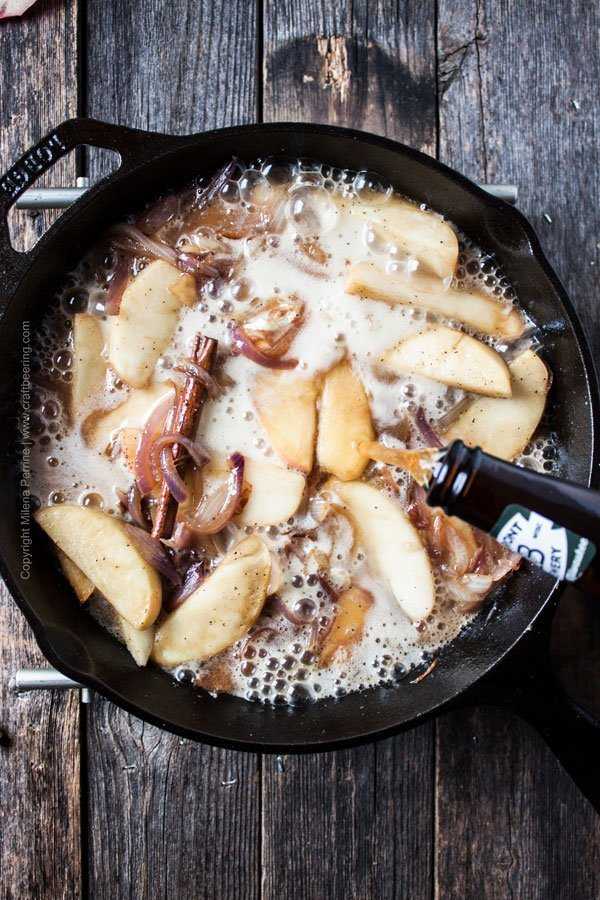 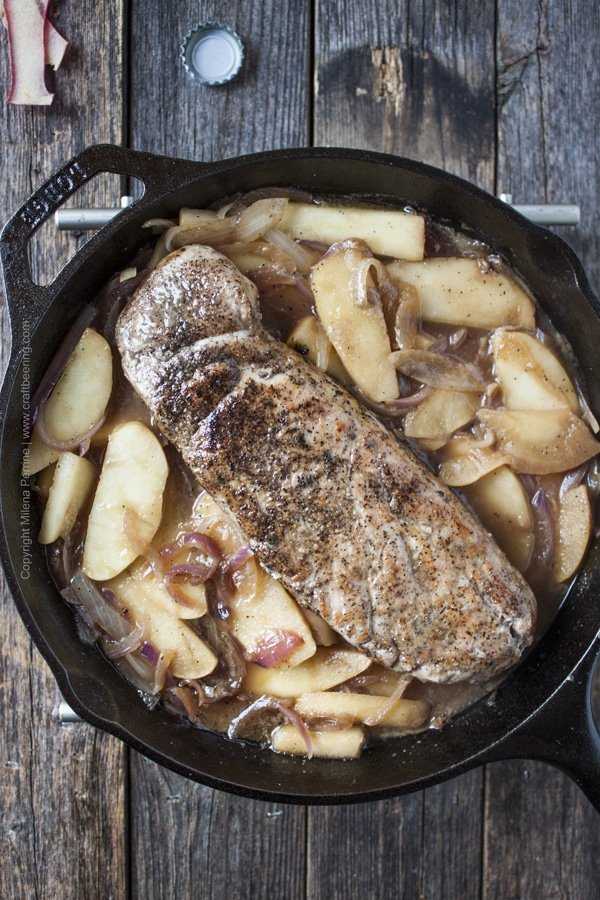 Pork tenderloin with apples ready for the oven

NOTE: Pork tenderloin doesn’t have to be cooked to 155 F like most other cuts or pork. Look for internal pork tenderloin temp of 140-145 F when measured with food thermometer in the center of the meat. 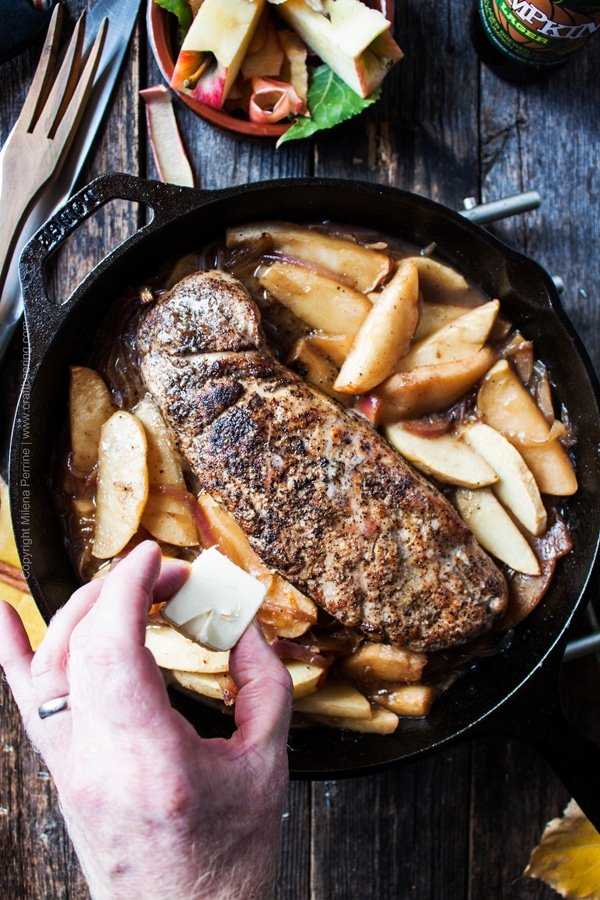 We made tandoori seasoning rice with sultana raisins to accompany our baked pork with apples and onions. The flavors complemented each other famously.

Since we are very low key most of the time we served the pork in the skillet to share family style. This dish however lends itself to elegant individual servings and the complex flavor profile it delivers certainly merits a fancier presentation. 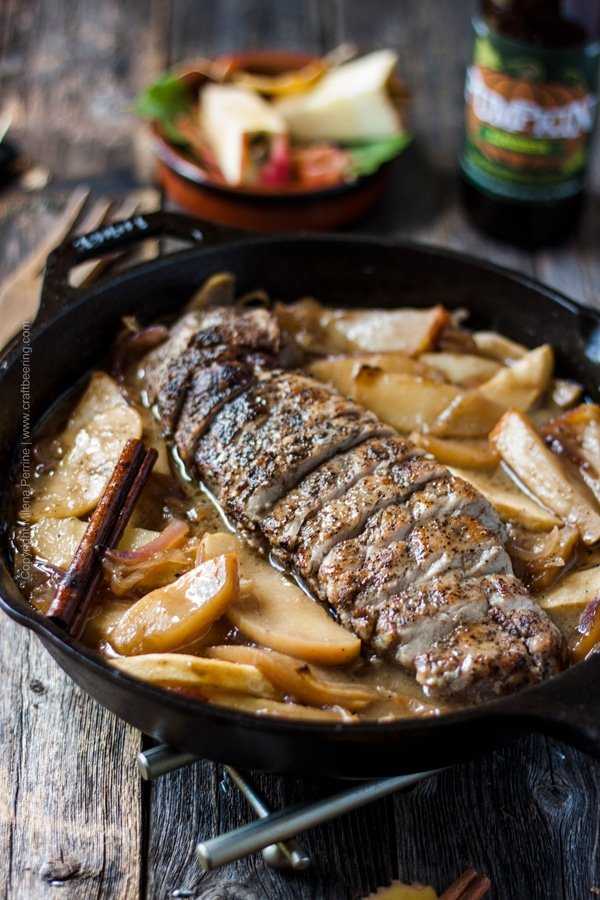 TIP: To make tandoori rice combine 1 cup of Jasmine or Basmati rice with 2 cups of water, 1 tbsp butter, 1 tsp of tandoori seasoning and 1/3 cup of sultana raisins in a pot. Stir, cover with lid and cook on medium heat until the water is absorbed (about 10 – 15 minutes). Remove from heat and let sit covered. Fluff with a fork right before serving. 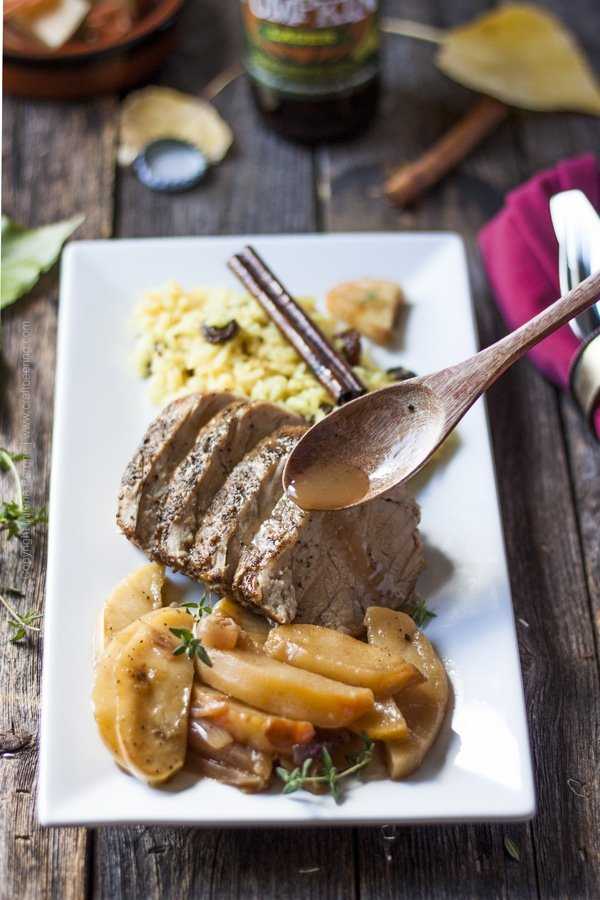 Garnish with fresh thyme if you have it on hand. Sometimes we drizzle a mix of Dijon mustard and maple syrup over the finished dish which adds another sweet and savory dimension.

Using pumpkin ale versus apple cider or apple juice adds an amazing complexity of flavors and aromas and really elevates the dish.

Chef note: 140 - 145 F is a safe pork tenderloin temp. No need to cook it to 155 F internal temperature as required for other cuts of pork.

Best served with rice or over mashed potatoes.