In this case, it is not just any beer. It is a dunkelweizen.

And it is not just an ingredient to the banana bread batter. A decadent beer glaze is in attendance as well. A dunkelweizen glaze that gets soaked up and results in an even moister loaf.

Our recipe leverages the banana characters of the yeast used to ferment the wheat brew and the complex caramel/chocolate edge of its dark malts to perfection. 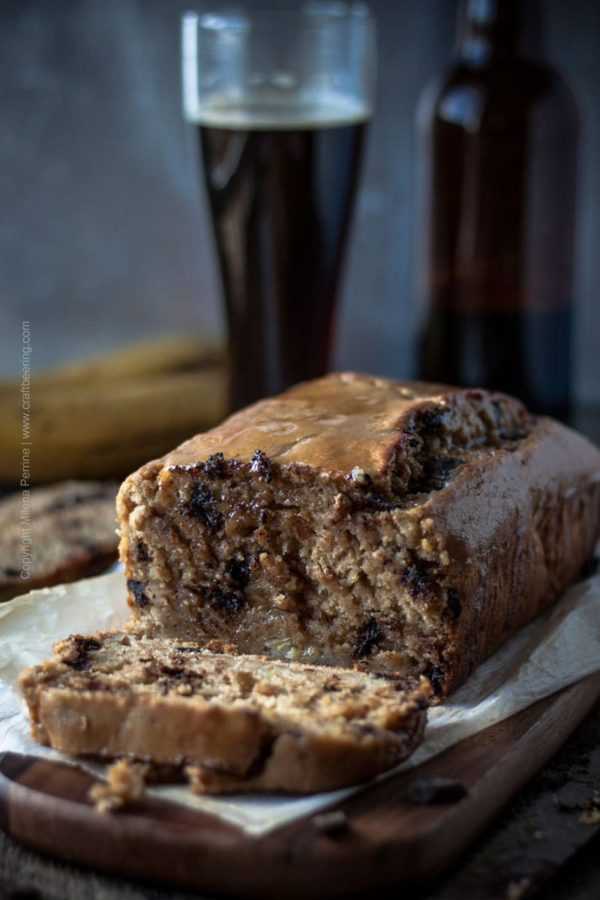 About the Ingredients & How to Make Beer Banana Bread

We throw in semi-sweet chocolate chunks in addition to using the dark wheat ale. Another Perrine original cooking with beer recipe we are so excited to share. Especially considering the fact that the dunkelweizen was home brewed by Chris. (Dunkelweizen = ‘dark wheat’, from German, the style originated in Bavaria).

I’m usually in charge of banana bread production at home.

It is a bit of a staple on our breakfast menu mainly due to demand generated by our son (he also has ninety percent of the consumption covered).

When I make it with beer I typically use German hefeweizen to capture the exquisite and very complementary banana, bubble gum and clove esters as well as the biscuity flavor of the style. It works beautifully.

On those rare occasions that we have beer banana bread Chris is all over it. As am I, gotta compete for what is scarce. 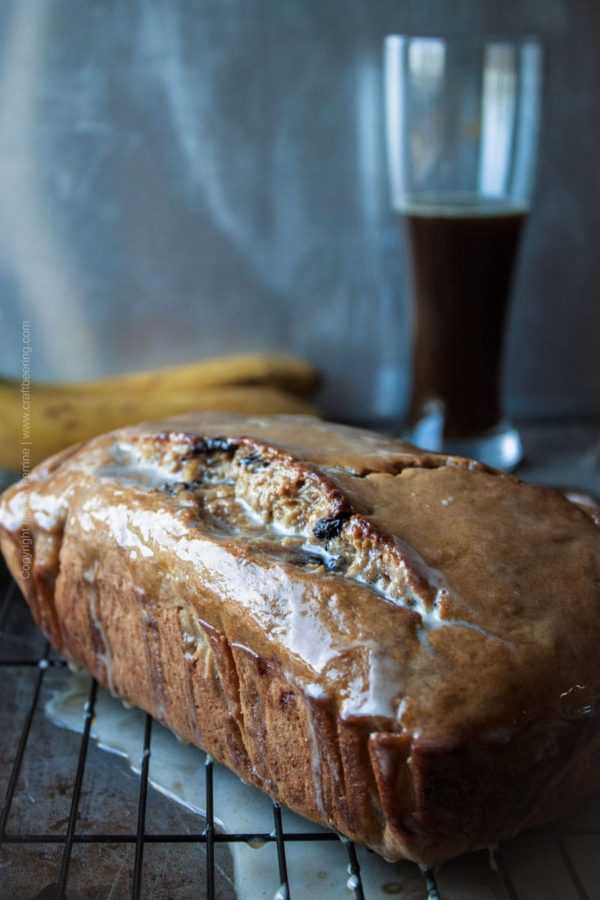 This dunkelweizen version however is by far superior to the plain hefeweizen one (I cannot believe I just used the word ‘plain’ next to hefeweizen, one of my favorite beer styles…oh, well).

Anyways, Chris and I are in agreement that using dunkelweizen delivers a tastier, more complex beer banana bread. Perfect way to have beer for breakfast. Especially when semi-sweet chocolate chunks are added.

If you like chocolate, caramel and bananas, you will fall in love with this beer banana bread. If dunkelweizen happens to be a favorite of yours, you already know why. 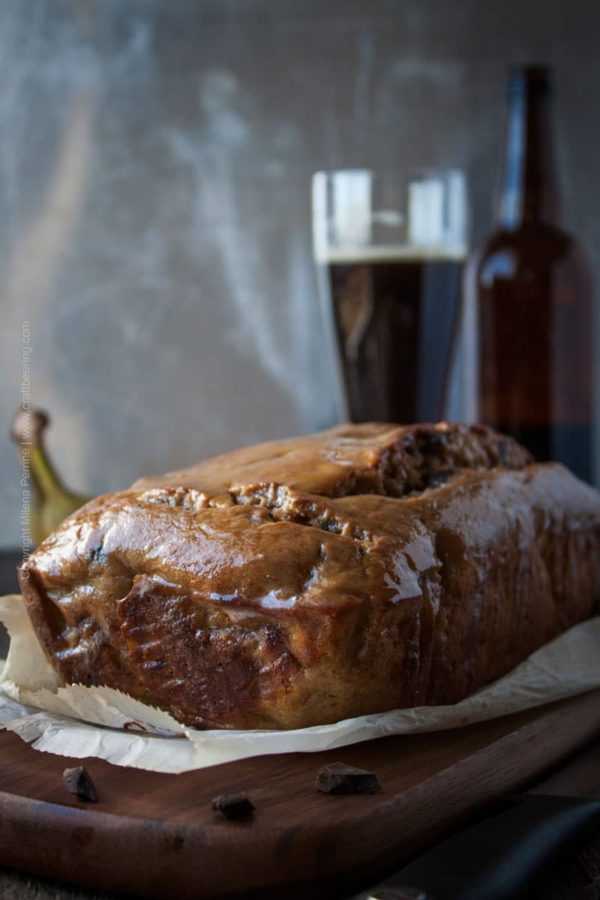 I need to step back and state this – you cannot fully relate to what I am describing if you have not previously indulged in a dunkelweizen. If this is your current situation I urge you to try a dark wheat beer as soon as you can.

Why Use Dunkelweizen in Beer Banana Bread?

It is such a delicious and creamy, yet light and drinkable style that you will be hard pressed to remain indifferent to it. As I mentioned above, Chris recently brewed it for us because we both love it so much (and he did an outstanding job).

Even though not the most common of styles, there are plenty of breweries that make it and most liquor stores will carry at least one version of it, whether imported from Germany or brewed in the US. Sometimes it is referred to as Dunkel Weissbier or Hefe-Weissbier Dunkel, but it all means the same, a dark German style unfiltered wheat brew. 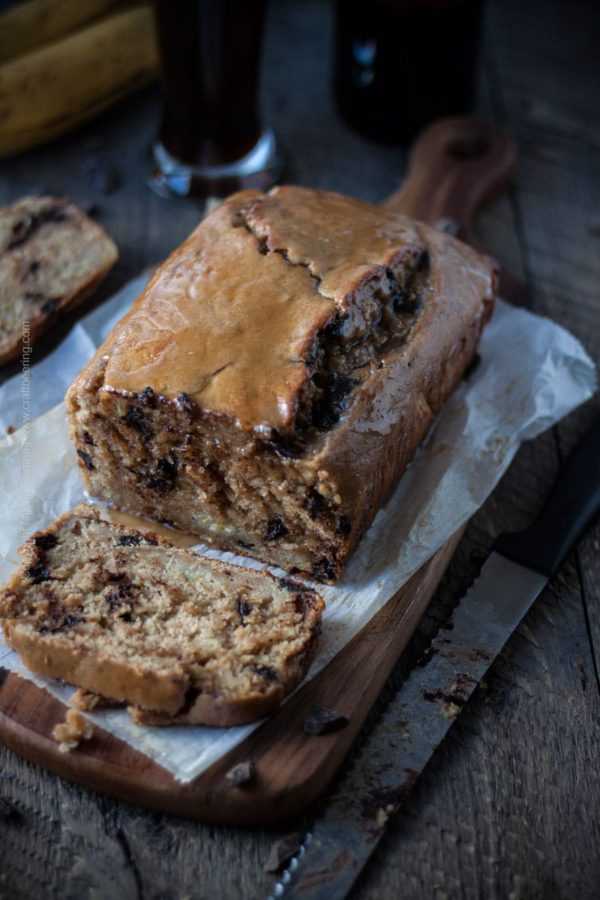 The main characteristic of the style is the smooth and rich maltiness brought about by fifty to seventy percent dark wheat malt in the grain bill, aided by dark Munich or cara malt. Hops are in the back seat, there is virtually no bitterness.

The characteristic citrus of hefeweizen made with American yeast is not present, it is replaced by dark fruit notes and hints of sweet toast, caramel and chocolate.

The banana esters from the yeast are present in full force. 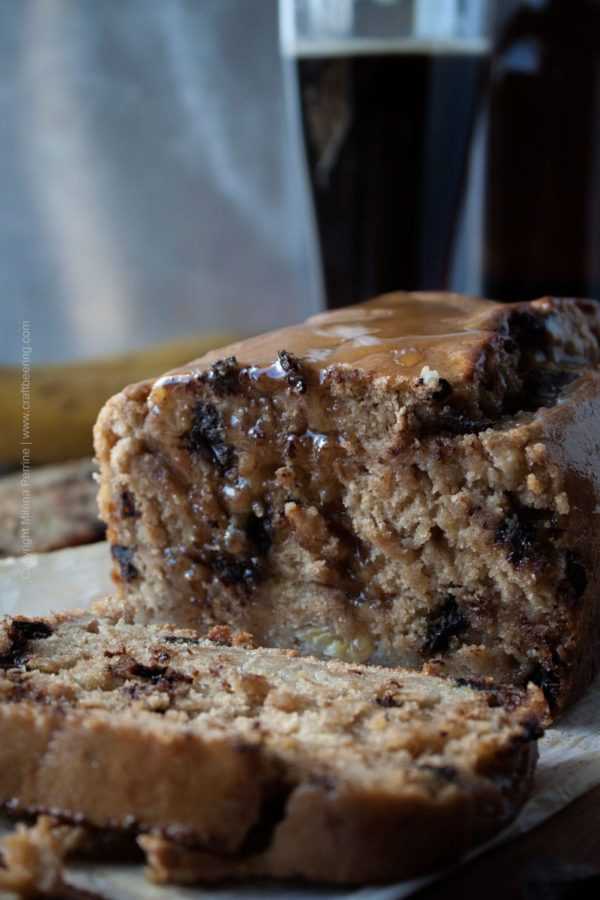 Must Use Ripe Bananas

I believe that I need not convince you to choose ripe bananas and semi-sweet chocolate. And to use dark brown sugar.

Self-explanatory given the profile of the beer you will be adding, right? Now, if you like very moist banana bread, you may consider my suggestion to under bake the bread. I am serious…I love to take out my loaf about 5 minutes before it would be considered perfectly baked. And in this instance, I could not drizzle it with beer glaze soon enough.

About the beer glaze

It is simply confectioners sugar with a splash of dunkelweizen, allowing for all the beautiful aromas described above to come through. Much like the beer icing I whipped up for these IPA Mango Fritters but slightly runnier.

I like it on the runnier side. I simply eyeball the ingredients, no particular proportions to refer to, I just use a more generous splash of the beer. When the beer glaze/icing is thinner, the beer banana bread absorbs it fully and becomes that much moister. You are then able to taste more of the fresh dunkelweizen flavors.

This is how easy it is to make this beauty. I hope you bake yours soon. We’ll be here to accept your gratitude for cluing you in:) Cheers, friends!