Every year across America people enthusiastically celebrate National Beer Day on April 7th. Here is a list of other beer holidays that honor the world’s greatest beverage. 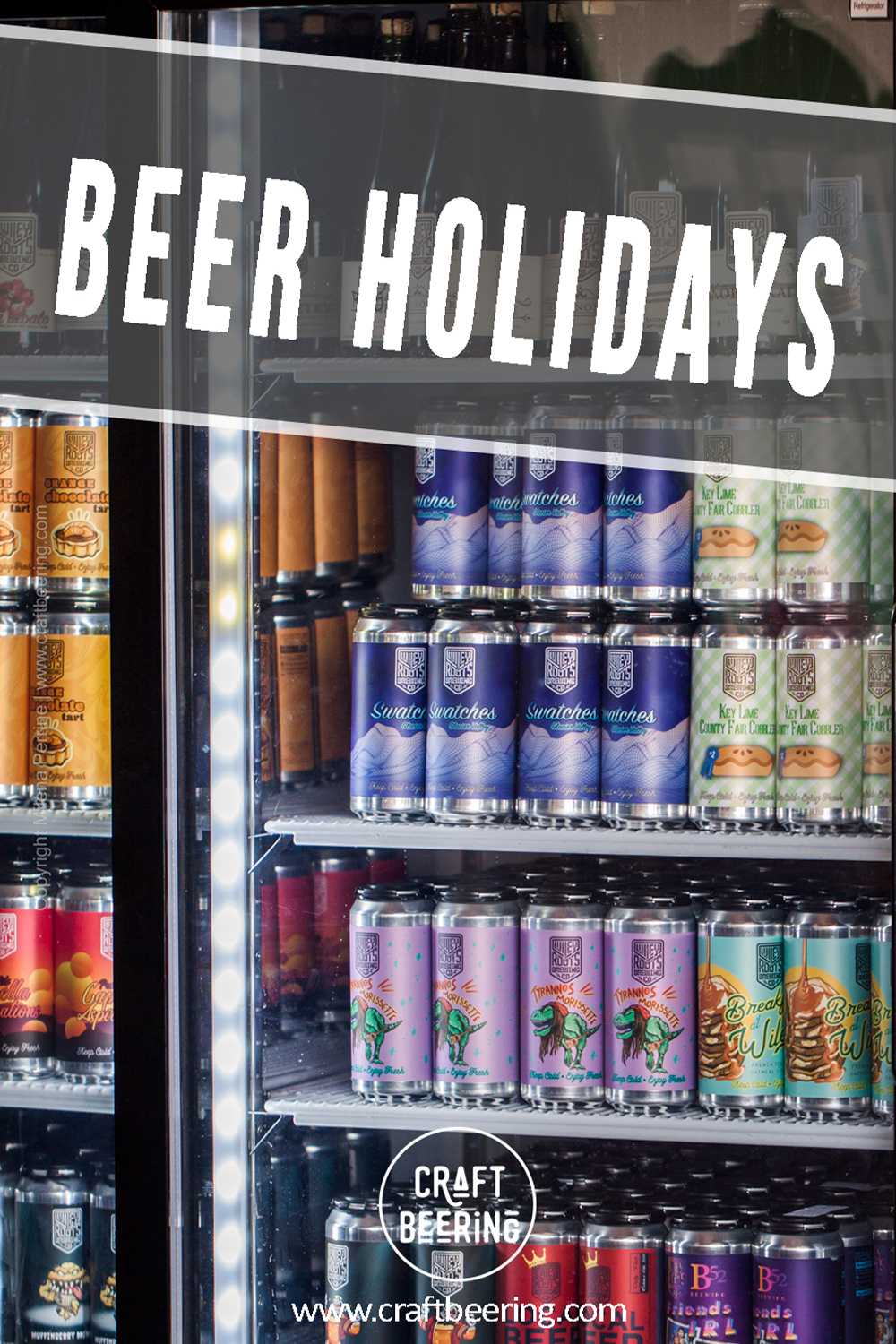 Whether dedicated to a particular beer style, the enjoyment of beer in general or a completely different event that evolved into a beer centered holiday which generates high beer sales, the so-called beer holidays are celebrated with genuine enthusiasm at home in the US and around the world. As the world’s most popular alcoholic beverage beer has always been and remains a great unifier of humanity.

Third Saturday of January – Baltic Porter Day. Annually celebrated in Poland where Baltic porter is the national beer style of choice, brewed since the early 1800s and is lovingly known as “the brewers’ treasure” of Poland. The formal holiday was first celebrated in 2016, initiated by Polish beer enthusiast Marcin “Mason” Chmielarz.

January 24th – Beer Can Appreciation Day. Beers cans, since first sold in 1935 have generated many reasons for appreciation. Besides keeping beer fresher and being fast and easy to recycle they are often the canvass for beautiful beer art. Enjoy a beer from a can to celebrate.

Stout Month. February is a long celebration of the various beer styles that fall under the stout category. The idea was Jack Harris’ (a brewer and co-founder of Fort George Brewery) and is rooted in the affinity stouts seem to have for dark, cold winter nights.

Super Bowl Sunday. Beer is truly the quintessential drink of Super Bowl Sunday with beer sales during the weekend of the Big Game being the highest of any other period of time in the US.

March 17th – St. Patrick’s Day. On this day Guinness is enjoyed by millions of people around the world, even though they don’t always know exactly who Saint Patrick was. The power of Irish stout in action.

March 23rd ­– Orval Day. This day celebrates Orval Trappist Ale, one of the most influential beers in the world. Orval is brewed by the monks of Notre Dame d’Orval monastery, founded around 1070 AD in the pastoral Belgian countryside. The beer has inspired brewers around the world to use wild yeast strains and create highly attenuated Belgian style beers.

March 27th – Michael Jackson Day. Celebrated as the most impactive man in modern beer history and the Father of craft beer, Michael Jackson was an English beer critic (born March 27 1942, died in 2007). He is credited with creating awareness of world beer styles in an age when mass produced, cheap lagers were becoming the norm. He authored multiple books on beer and was the star of the Beer Hunter show, which added to the momentum of a world wide beer renaissance and modern craft beer revival. 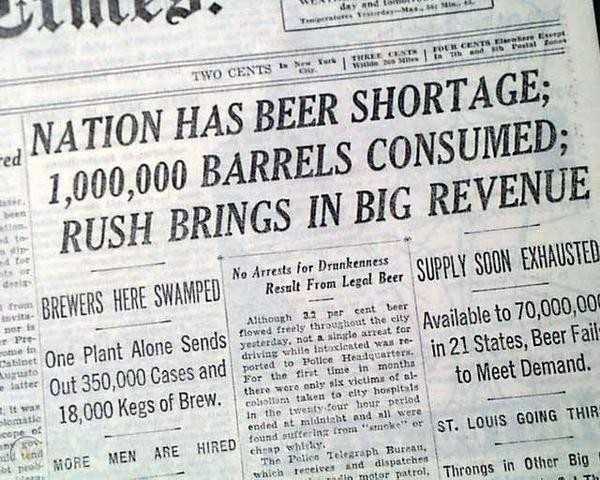 April 7th – National Beer Day. Celebrated because on April 7th, 1933 President Franklin D. Roosevelt signed the Cullen-Harrison Act into law and legalized sales of beer with alcohol content of 3.2%, effectively repealing the Volstead Act and ending Prohibition. Upon signing the legislation, Roosevelt made his famous remark, “I think this would be a good time for a beer.”

The legislation is also known as the Beer Permit Act and the Permit and Tax Beer Act. 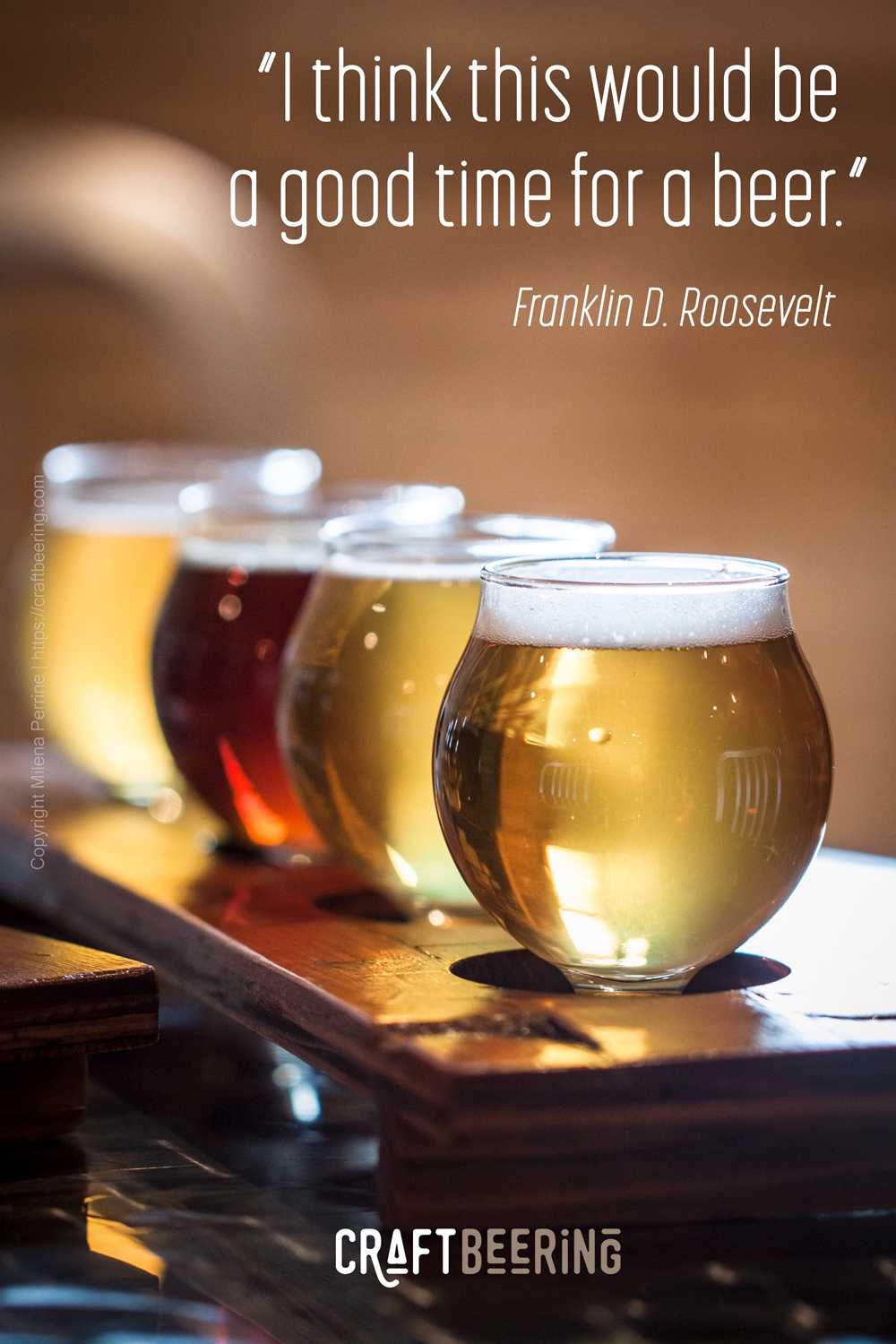 April TBA Saison Day. Pioneered by Alagash Brewing Co. (makers of some of the best saisons in the US), this day celebrates the unique and diverse farmhouse ales of Flanders. The exact day in April is determined each year by the brewery.

April 11th – King Gambrinus Day. Considered an unofficial Patron of Beer, King Gambrinus is a legendary European character thought to have been a king, count or duke of Flanders. There are many, many stories about him and his love of beer, brewing and the joys of life. In Germany he is popular as the patron of bock lager and statues and paintings of him are plentiful in the country’s beer culture, always depicting him with a goblet of foaming beer, raised to the skies. When the Germans settled Wisconsin and started brewing they did not forget about Gambrinus. 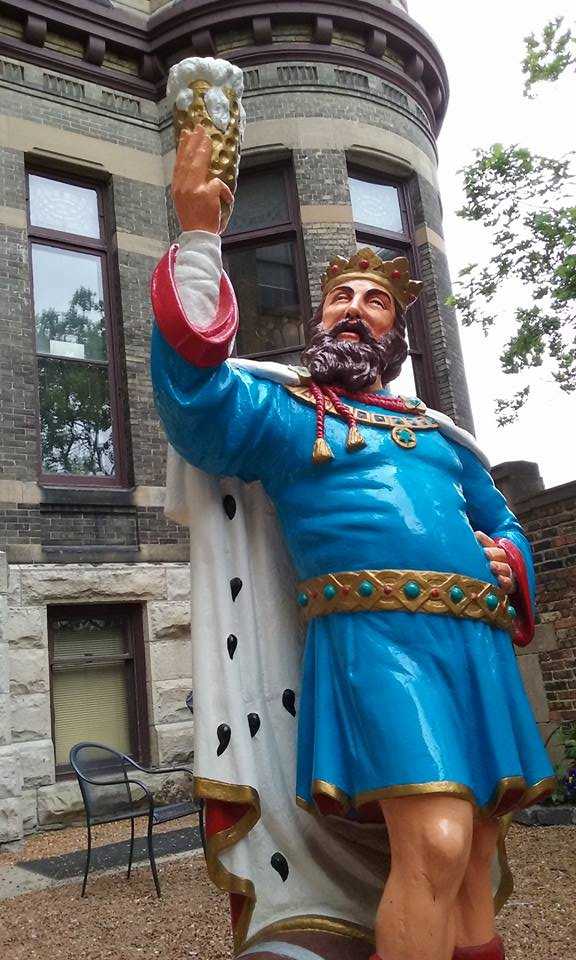 April 23rd – German Beer Day (Tag des Deutschen Bieres). Every year on this day the Germans celebrate the anniversary of the German Beer Purity Law (Reinheitsgebot, April 23, 1516). Since then, only water, malt, hops and yeast were allowed as in ingredients in beer.

April 30th – Swiss Beer Day. On this day people in Switzerland honor the craft of their national brewing art and appreciate Swiss beer in all its diversity. This holiday also marks the start of the summer beer season – people toast and express their support for the Swiss brewing industry.

TBA May – American Craft Beer Week. Every year a week-long celebration of the creativity of US craft brewers is staged in various forms around the country. Every craft brewery organizes events for its patrons and many release limited batch brews.

May 5th – Cinco de Mayo. Aside from its actual historical significance, Cinco de Mayo is the second highest beer sales generating holiday of the year after Super Bowl. Americans alone spend upwards of $700 million on beer on this day that celebrates the Mexican army’s victory at Puebla in the Franco-Mexican War.

First Saturday in May – National Homebrew Day. In the US homebrew day is celebrated by all homebrewers and lovers of craft beer who appreciate their work.

June 15th – Beer Day Britain.  In 1215 the Magna Carta was executed on this date and subsequently June 15th was chosen as the British national beer day. On this holiday the Cheers to Beer anthem is sung at pubs across the country. Take a listen. 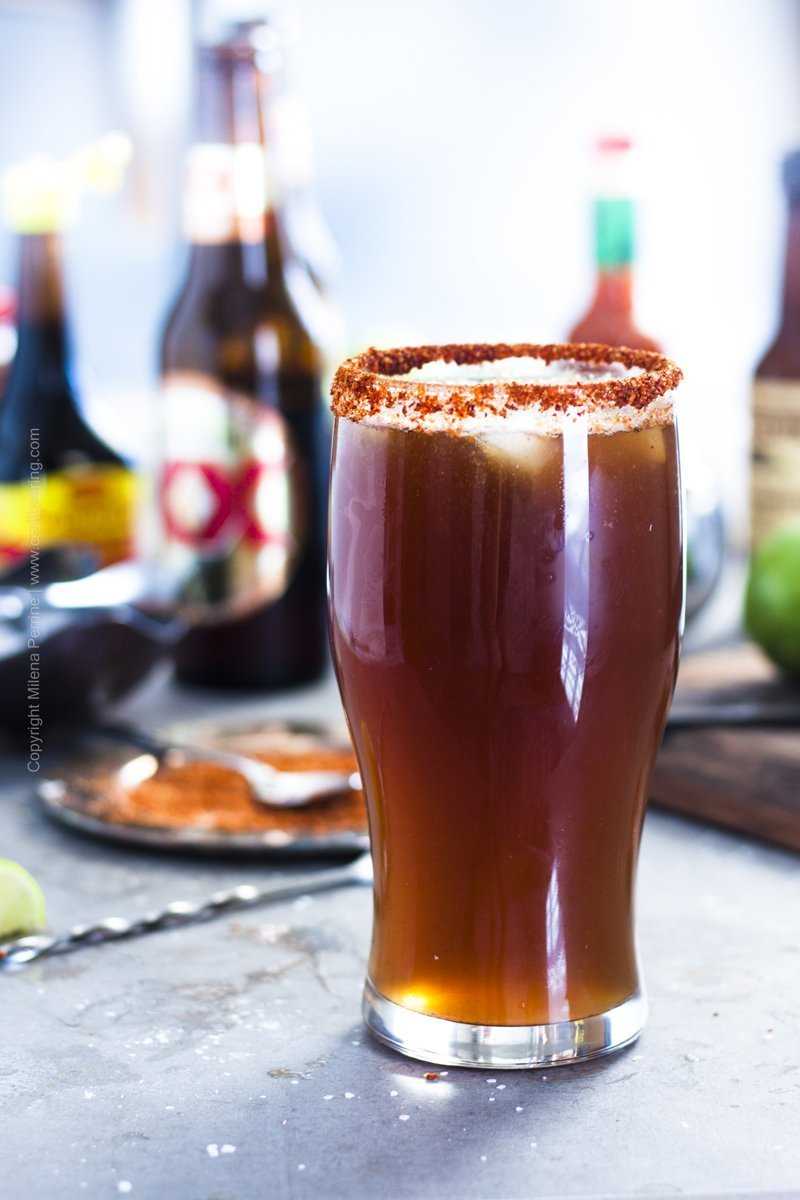 July 18th –  St. Arnoldus Day. An actual saint of the Catholic church, Arnold of Soissons is the patron saint of Belgian hop-pickers and brewers. As a monk at the Abbey of St. Peter in Oudenburg he was instrumental in teaching people to avoid the dangers of contaminated water during the Medieval ages. Instead he taught them to drink beer. He insisted that beer gave the ‘gift of health’ which was largely true because to brew it water was boiled and pathogens killed in the process. During times of sickness his advice saved many lives. 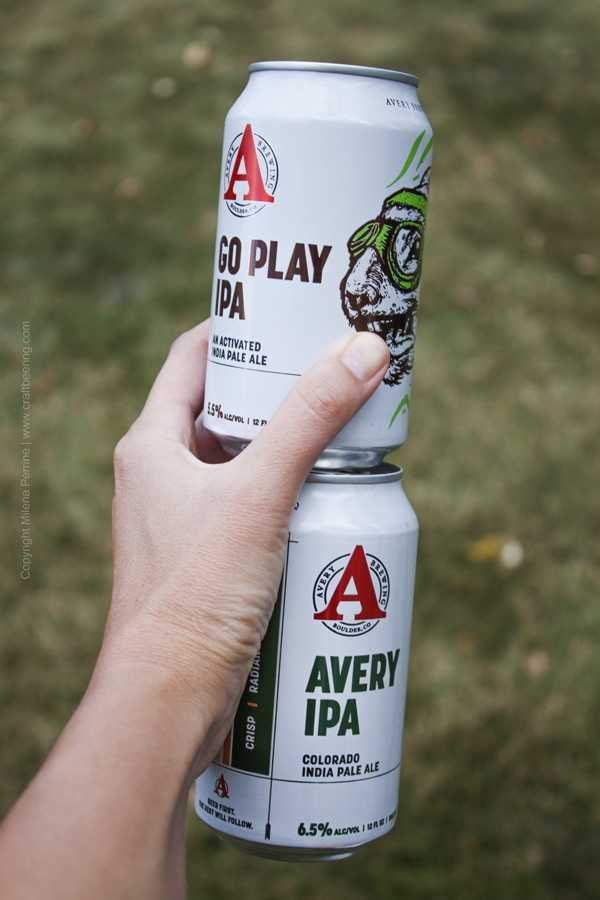 First Friday of August – International Beer Day. A beer day celebrated around the world with roots in Santa Cruz, California. The founder, Jesse Avshalomov envisioned a beer holiday with three main objectives – to gather with friends and enjoy a beer, to celebrate those brewing beer and to unite people around the world by honoring the beer styles of all nations on a single day.

September 8th – National Sour Beer Day. Sour beers, be they wild yeast fermented and soured during barrel aging or quick, lacto sours are enjoying immense popularity among craft beer drinkers and are celebrated on this day.

September 9th– National Pizza and Beer Day. An iconic combination in the US and around the world. While beer is the dominant alcoholic beverage globally, the same applies to pizza as a street food or comfort food.

Oktoberfest. The world’s largest and longest running beer festival. The exact days of Oktoberfest each year vary, but it inevitably begins in September and goes on until the first few days of October. Read more about the world’s biggest folk festival and its connection with beer.

September 27th – Crush a Can Day. Intended to drive awareness about the benefits of recycling Crush a Can Day has a noble purpose which is weakened by the fact that most recycling facilities today use artificial intelligence driven lines. Crushed cans are difficult to recognize by the technology and their sorting is more difficult in result. If you celebrate this holiday, be sure to not to crush your beer cans before you recycle them (remove all sticker type labels first) so they look like beer cans and not mangled aluminum. Celebrate by crushing the can figuratively and not literally.

September 28th – National Drink a Beer Day. Celebrated in the US this beer holiday emphasizes the diversity of styles in beer and drinking it in good company.

Oktoberfest draws to an end (see September above).

First Friday of October – Barrel-Aged Beer Day. A day to honor beer elixirs that have been pampered in oak for a while. Barrel aging creates some of the most enjoyable flavors in beer and rightfully deserves its own holiday.

First Thursday of November – International Stout Day. Stouts around the world are at the center of attention on this day and you can expect a number of creative releases of the style by breweries on this day.

First Saturday of November – Learn to Homebrew Day. Established by the American Homebrewers Association in 1999 to encourage beers lovers to create their own libations and further the art of brewing.

December 10th – National Lager Day. Lagers from pale pilsners to potent eisbock are celebrated. A great way to honor bottom fermented beers is to do a tasting across the spectrum of light, amber and dark lagers.