Tender and crispy beer falafel made from scratch, starting with dried chickpeas. 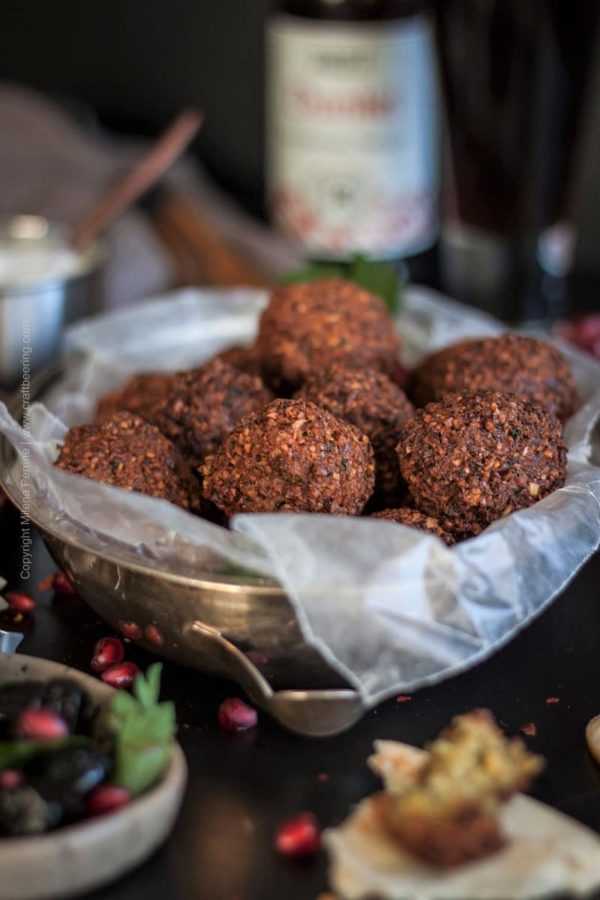 Falafel is a small fried patty (or ball) made of a mixture of ground chickpeas, spices and onion. It is an extremely popular street food in Middle-Eastern cuisine and is also considered the National dish of Israel. Falafel is thought to have originated in Egypt.

Preparing falafel from scratch is definitely the way to go. Avoid using chickpeas from a can.

If you have ever made falafel with chickpeas (aka garbanzo beans) from a can you may very well have had a mini fiasco experience.

The kind where your entire chickpea mixture transforms into mush and falls apart as you try to fry little balls/patties.

Sadly, I speak from personal experience. I had almost given up making my own falafel a few years ago when Chris told me that I should soak dry chickpeas in water, which made all the difference. That and controlling the temperature of the frying oil.

To Make Falafel You Will Need a Food Processor

You are aiming for a coarse paste which is most easily achieved by blitzing the re-hydrated chickpeas and other ingredients in a food processor. 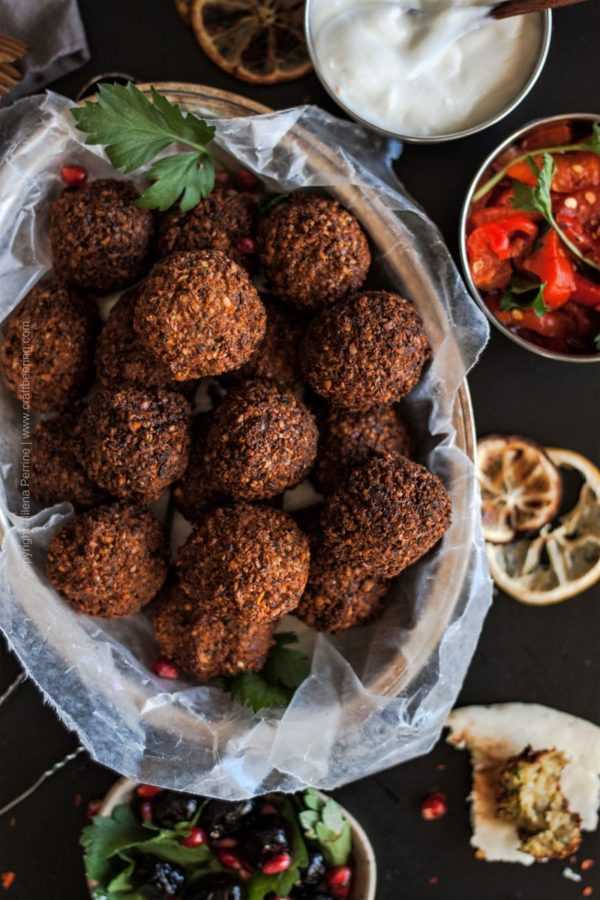 I love, love, love falafel and ate copious amounts of falafel stuffed pita pockets growing up. It was everywhere.

Without a doubt it is one of my most favorite middle Eastern ‘sandwiches’. Second favorites being soujouk and döner. I also like to add a few freshly fried falafel balls to a simple green salad or my beloved Bulgarian Shopska salad and call it a meal. Falafel is one of the foods I’d sorely miss if somehow I could not have it again.

Not long ago a friend and I were munching on some freshly fried falafel hugged by soft pita bread and drizzled with tahini. We were having beers and both made comments about how falafel pairs great with beer and goes well with so many flavorful fresh dips, olives and veggies. She asked if Chris and I had a recipe to make falafel with beer.

It seemed only logical to her that we would have one handy. We do now:).

After thinking about it for ten seconds I confidently concluded that

since there is no feasible way to flavor a falafel mixture with beer (its typical moisture content being already high, it could not possibly absorb more liquid) the only way to do it is to let the chickpeas soak in a suitable beer and become infused with its flavors as they absorb liquid.

I told my friend I’d give it a try. Said and done.

To the best of my knowledge, at the time I am writing this, you are looking at the world’s third ever batch of beer falafel made from scratch in the pictures of this post. (Batches one and two were practice towards perfection).

Perfectly crispy outside, soft, airy and delicious goodness inside. With just enough of a malty touch to excite the palate.  Very subtle. 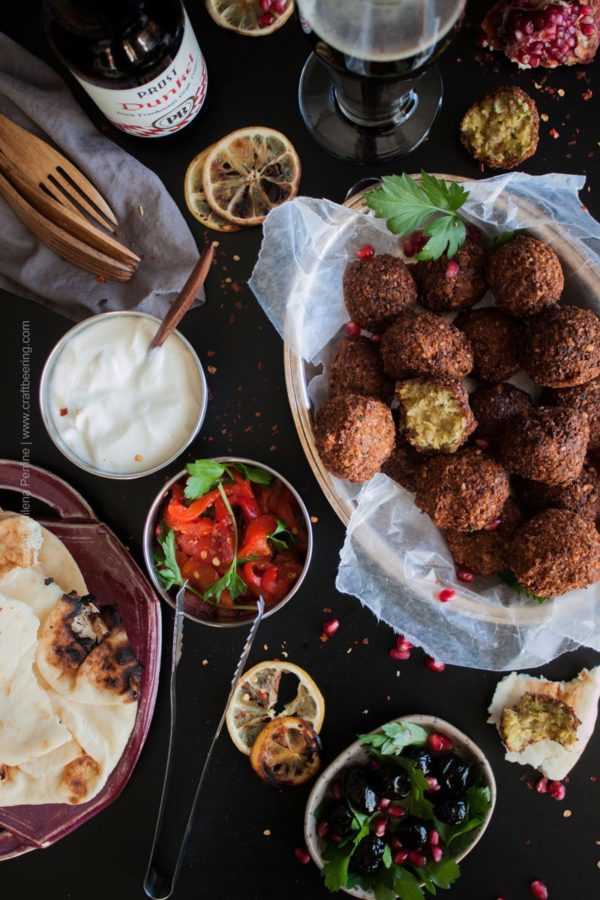 Leveraging the toasty, malty flavors of dark beer to revive dried chickpeas is a fun and delicious approach to the process. (If you’d rather not use beer, simply use water.)

Very excited to share this Perrine original recipe with you all. It is a bona fide star in the cooking with beer recipe universe of the Perrine craft beering family.

What Beer Style to Use in Beer Falafel?

I chose to use (among several suitable options) one of Chris’ favorite beer styles ever. A South German Dunkel lager, ie a dark amber lager (‘dunkel’ = ‘dark’ in German).

There are actually two main Dunkel styles – the more famous Munich Dunkel and the lucrative Franconian Dunkel. They are very similar, with the latter being less sweet, somewhat stronger and finishing drier.

Franconian dunkel has a dark bread(y) nose, smooth and medium bodied with confident toasty maltiness and a barely perceptible nuttiness and dark fruitiness. It has less caramel candy flavor than you’d find in a Munich Dunkel and is very crisp with a dry finish. Plus Munich style dunkels tend to be chocolaty which is not what I wanted in my falafel. 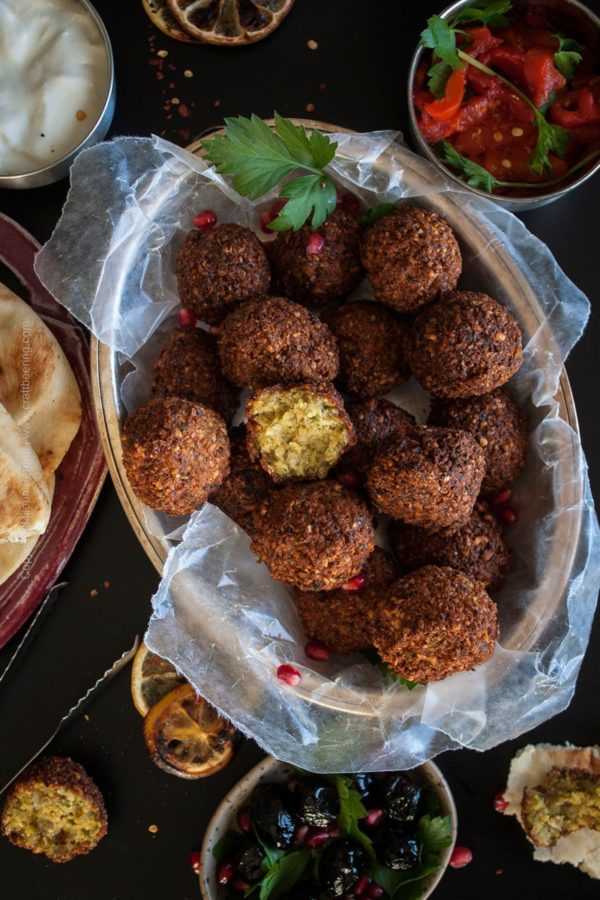 You do not need me to tell you to stay away from anything too bitter or fruit flavored or too chocolaty or coffee flavored for example. I wouldn’t even use wheat beer because of the banana and clove yeast esters. Chickpeas taste naturally nutty and you want a brew with grain bill participants contributing complementing flavors. Toasty and malty, with barely perceptible hoppiness. Not too boozy either. This naturally puts German lagers on top of the list, but I’ve taken the liberty to suggest more options even though as of right now I have not made the recipe with each and every one of them. Give me a year and I will get there, at the rate I tend to eat falafel. 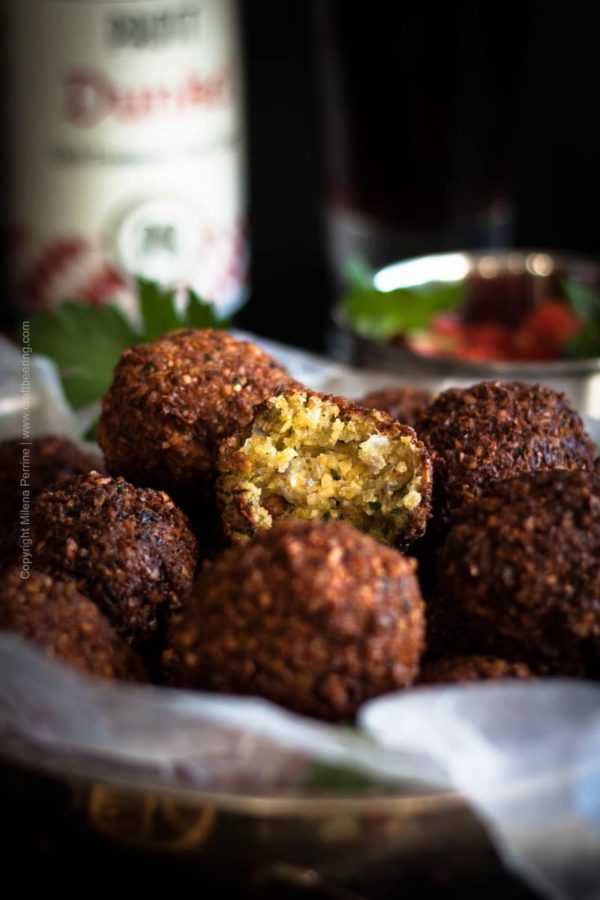 The flavor infused by the beer is ever so mild and polite – it does not compete for the spotlight and acts in support of the chickpeas and as an ally to the other ingredients added.

Don’t forget that there is garlic, and pungent parsley, and cilantro, and onion and cumin for your taste buds to consider.

German lagers actually shine in recipes with cumin. My favorite dish of all times involving beer is pork with cumin and pilsner which I am yet to make for the blog. It is my mother’s recipe.

For now I hope you will soak some chickpeas in Dunkel lager and follow the rest of the recipe to reward yourself with delicious beer falafel. Cheers, friends!

If you enjoyed spending time on Craft Beering we sincerely invite you to join us on Instagram, Facebook, & Pinterest or enter your e-mail in the subscription box at the bottom of each post (we’ll send you a list of all new posts every two weeks). 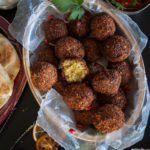 Tender and crispy beer falafel made from scratch, starting with dried chickpeas. An infusion of subtle toasted bread and malty flavors courtesy of Dunkel lager complements the nuttiness of the chickpeas and the pungency of the other ingredients. Overnight soaking for at least 12 hours required.