The complete guide to beer marinated chicken. Choose from several recipes or mix your own beer marinade for chicken leveraging the flavors of different beer styles and spice and herb combos. 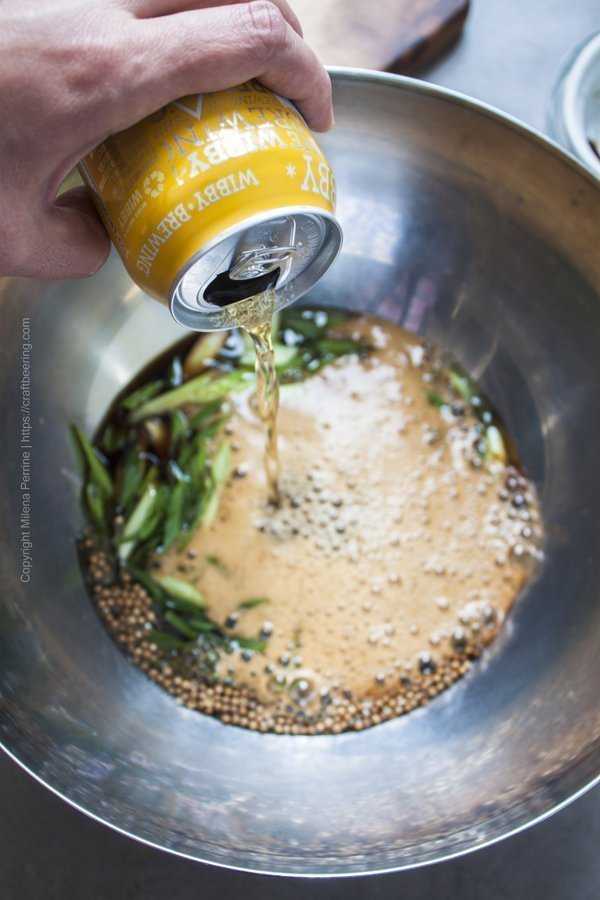 Skip ahead to our list of Beer Marinade for Chicken Recipes or
Read on to learn how beer marinades work, what beers styles to seek out, relevant tips and how you can create your own recipe.

Why a Beer Marinated Chicken?

Beer makes everything better (most things anyways) and beer marinades for meat in general and chicken in particular are no exception.

First and foremost a beer marinade imparts flavor to the surface of the chicken meat.

It also makes it juicier (especially chicken breast) and in certain circumstances can tenderize it – when the beer is lacto soured or contains another ingredient with protein breaking enzymes (ex. the al pastor marinade below which contains bromelain from using fresh pineapple).

While flavor infusion is the main benefit, beer marinades have a powerful property when it comes to charcoal-grilling chicken meat that has been in contact with them.

The anti-radical capacity of craft beer can prevent the formation of carcinogenic substances on the surface of charcoal-grilled meats called polycyclic aromatic hydrocarbons (PAHs) . Several studies have proven that meat marinated with beer inhibits the harmful PAHs from reaching significant levels. In fact the darker the beer, the stronger the effect.

TIP: In view of the above information always use a beer marinade when charcoal-grilling chicken.

Anatomy of a Beer Marinade for Chicken

A good beer marinade should be well-balanced, with ingredients complimentary to each other and to the beer style used. Balance is easy to achieve if you cover the following general categories.

Best Beer to Use in a Chicken Marinade

It is important to choose a low-bitterness, flavorful brew.

Unless for some reason you want to impart bitterness to your chicken there is no point in using an aggressively hopped, dank IPA or a stout with roasted barley and a bold hoppy bite.

Equally pointless would be to use a bland mass produced, corn syrup based lager that will contribute absolutely nothing of value to your marinade.

Go with well-crafted, flavor packed lagers and ales. Let go of any misconceptions that lagers or lighter beers are not flavorful or that a beer needs to have high alcohol volume to be considered flavorful.

TIP: Purchasing single cans or bottles of beer as you grocery shop is a great way to ensure having the right style for your beer marinade recipe.

What if You End Up with Too Much Marinade Relative to the Chicken?

The recipes below are among our favorite to let chicken bathe in and are written to yield enough marinade for:

Chances are that you might be cooking less chicken than noted above and end up with more marinade than needed.

You can easily use extras as a basting liquid or freeze it for later use. Or – our preferred way – marinate extra chicken in the extra marinade. Use a freezer safe bag for both chicken and marinade and freeze it until you need it.

Just be sure to let it thaw in the fridge, not on your counter. 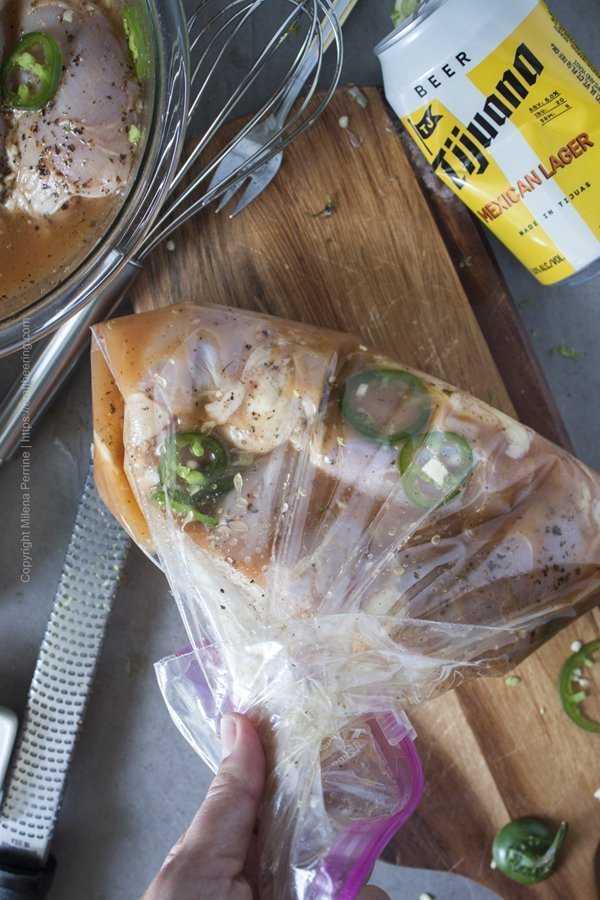 This recipe leverages the delicious malty sweetness and herbal Noble hops notes of Helles lager. You can substitute with other golden lagers such as Czech pilsner (most similar), light bock (aka Helles bock) or American craft lagers and blonde ales.

We really like to use it with whole chicken – spatchcock chicken gets particularly juicy and flavorful after bathing in this marinade because once the spine is removed significantly more meat surface gets flavored (shown #6 below).

Squeeze the lime juice and measure out 2 tbsp. Chop the green onions. Add the ingredients to a bowl (use a large one if marinating a whole chicken) and pour the beer last. Whisk to combine. Submerge the chicken, coat on all sides, cover with plastic wrap and let marinate.

For this one we recommend that you use an American wheat ale or Belgian wit as they typically have citrusy notes and are often further flavored with agave, honey and fresh citrus peel or puree. If you use preserved lemons the marinade gets a delightful boost of lemon essence.

We love to use this juicy beer marinade with chicken breast.

Zest the lime and the tangerines/orange and squeeze their juices in a bowl. If using fresh lemon – zest it and squeeze 1 tbsp of its juice, if preserved lemons – remove the pulp and slice thinly as shown below (#2). Mince the garlic. Place all the ingredients in a container or zip lock bag and add the wheat ale last. Whisk to combine, submerge the chicken meat and let marinade. Pat dry and season with salt and pepper before cooking.

You can go with either a light or a dark Mexican lager here (aka Vienna lager) and if you want to make the marinade extra spicy use an additional jalapeno or add a teaspoon or two of cayenne pepper.

We frequently use this marinade with skinless chicken thighs.

Mince the garlic, zest the lime and squeeze its juice, thinly slice the jalapeno. Place all the ingredients in a bowl – add the Mexican lager last, then whisk. Submerge chicken meat and let marinate.

You can always count on a dunkel lager with this one but when Marzens (Oktoberfest beers) are in season you can make the perfect Oktoberfest roast chicken by making the marinade with Oktoberfest lager instead. Bock lagers are also suitable.

Mince the garlic. Whisk together the peanut oil and the Bavarian mustard first, then add the apple cider vinegar and continue to whisk until smooth. Stir in the rest of the ingredients, add the beer last. Add the chicken, coat well and let marinate.

For this Thai inspired marinade we like to use a Belgian wit but American or Bavarian wheat ale or even gose ale can work great (if using gose, omit the lime juice).

Chop the cilantro, mince the garlic and squeeze the lime juice. Let the brown sugar soak in the lime juice (or a bit of beer) until soft. Mix all the ingredients together, adding the beer last. Add the chicken and let marinate.

This spicy beer marinade relies on chili heat which lend heat to the roasty malt sweetness and caramely or chocolaty notes of porters and sweet stouts. It is really good for dark chicken meat, especially of you plan on serving some mole on the side after you cook it.

First mix together the brown sugar and the balsamic. If using the prunes mince them and add them to the sugar/balsamic. Next add the oil, the pepper flakes, salt and pepper. Finally pour the beer, mix together, add the chicken and let marinade.

The tartness of gose (you can also use Berliner Weisse) works beautifully with the deep umami of cured anchovies and the brininess of capers.

Mince the garlic and finely chop the parsley. At the bottom of a bowl press onto the anchovy fillets and the capers with the back of a spoon until they turn into a pasty mixture. Add the mustard and the olive oil and mix together. Add the rest of the ingredients (pour the gose last) and whisk, then marinate the chicken.

You can make your own basil pesto or used store-bought pesto for this one.

Beer wise you can go with pilsners (even the North German variety, their herbal hoppiness makes a perfect match), American craft lagers, amber ales, blonde ales, kolsch and of course classic wheat beers. If you use gose ale, skip the lemon juice.

Whisk the ingredients together to form a homogeneous mixture and add the chicken to the marinade.

This marinade uses a Vienna lager in addition to classic Mexican al pastor marinade with fresh pineapple. It is typically used with pork but it works incredibly well with  chicken. You can find the recipe here.

Mix Your Own Beer Marinade

Simply browsing the recipes above may have already sparked a few ideas of your own or raised certain objections as to the use of some ingredients that you might not favor or would rather replace. And that is precisely where the beauty of composing a beer marinade lies – bathe your chicken in the flavor mix that makes you happiest!

Try to cover each of the main ingredients categories listed in the Anatomy of a Beer Marinade for Chicken section of this post, but other than that – experiment! Cooking with beer is as much fun as it leads to delicious results.

The marinades listed above are appropriate for all types of chicken meat, including a whole chicken.

The yield is sufficient to marinate:

Marinate the chicken for 2 to 12 hours.

Pat the chicken dry once you take it out of the beer marinade and season it with salt and pepper.

Don't baste the chicken with used marinade for health safety reasons. Refer to the post for details.

Nutritional information is meaningless in the case of a marinade which does not get consumed per se but rather infuses the chicken meat with flavor. Therefore none is noted.