A new craft beer cocktail for you today! This is what I am talking about – bourbon pale ale cocktail with fresh pomegranate juice and seeds and a hint of rosemary by way of rosemary ice cubes. Totally festive and totally in line with the most celebrated imagery of the season. 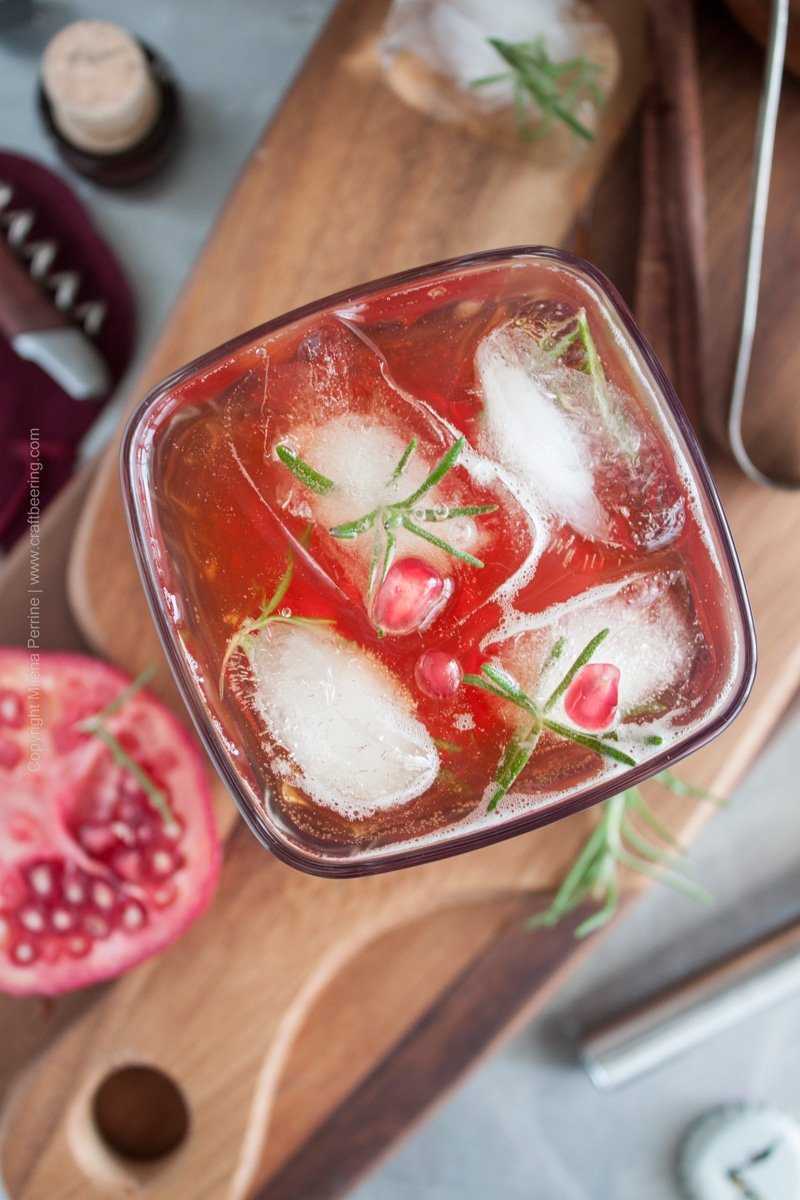 I am very glad that my homemade ice cubes freeze with lots and lots of air inside. They are not ice cubes that will last a long time before melting into the drink but visually – a total winner. The resulting white backdrop (from the air) looks really good against the green of the rosemary, doesn’t it? And the red color from the pomegranate juice.

Believe it or not (better to believe it for I speak the truth) the entire cocktail is built around the pale ale. All the ingredients were chosen to complement it. Yet, it is easy to replicate as no single ingredient is out of reach and there aren’t any complicated bitters and liqueurs involved. The hops in the pale ale do the heavy lifting. 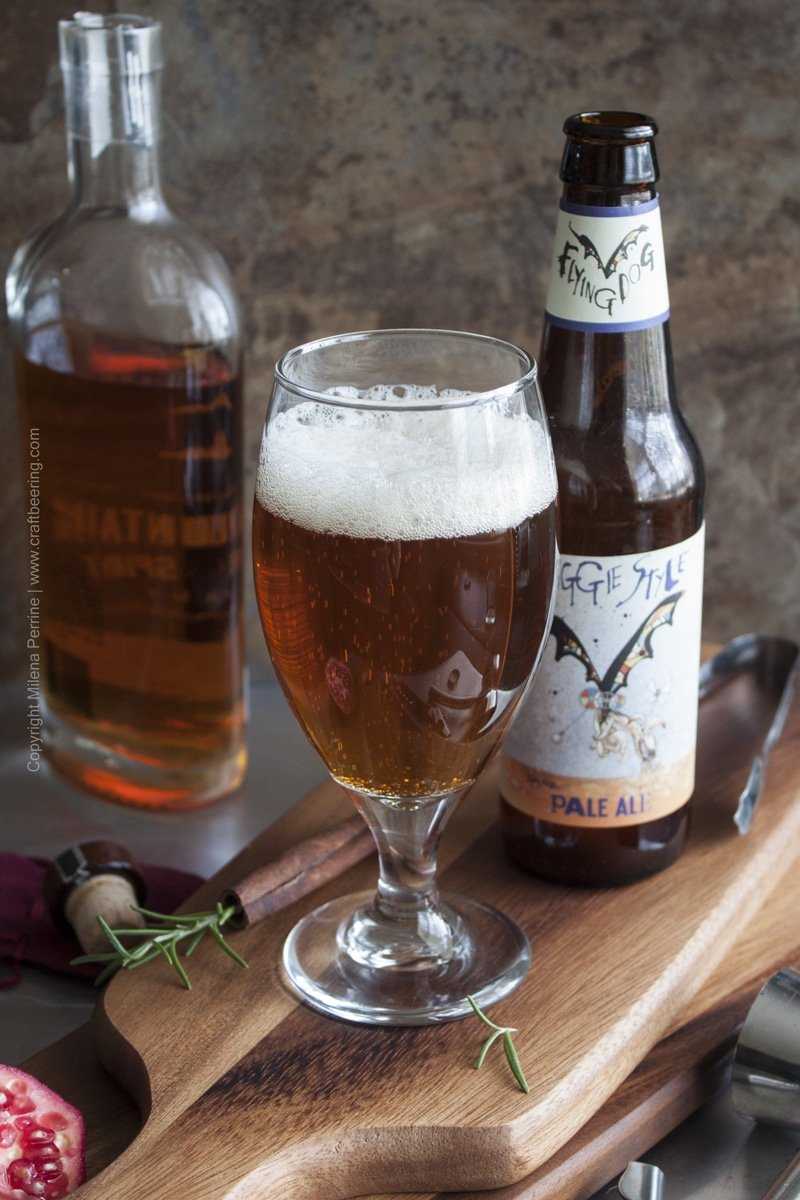 As you may know, pale ale is Chris’ favorite style. I like them well enough as long as they are well balanced and not overly hoppy, and the hops are not way too extreme. By not too extreme I mean not too perfumey or too piney (or worse cheap piney perfume like) as some American hop varieties can be, especially if used too liberally. Who wants to be haunted by the feeling that they are drinking liquefied and carbonated potpourri??

Founded in 1990 Flying Dog Brewery is quite old by American standards and has its origins in Aspen, CO. Theirs is a true story of adventure, which involves summiting the deadly second highest mountain in the world K2 and they brew a legendary line up of year round and seasonal brews.

Their Doggie Style pale ale is low in bitterness (IBU 35) and is brewed with Caramel malt which gives it a gorgeous bourbon like color and faint sweetish toast bite. It has a beautifully balanced mix of herbal and floral aromas which is a safe distance away from being perceived as perfumey. An excellent American style pale ale. Chris really likes it (I put some in his craft beer advent calendar this year) and he is also a fan of bourbon and the elegant tartness of pomegranates. 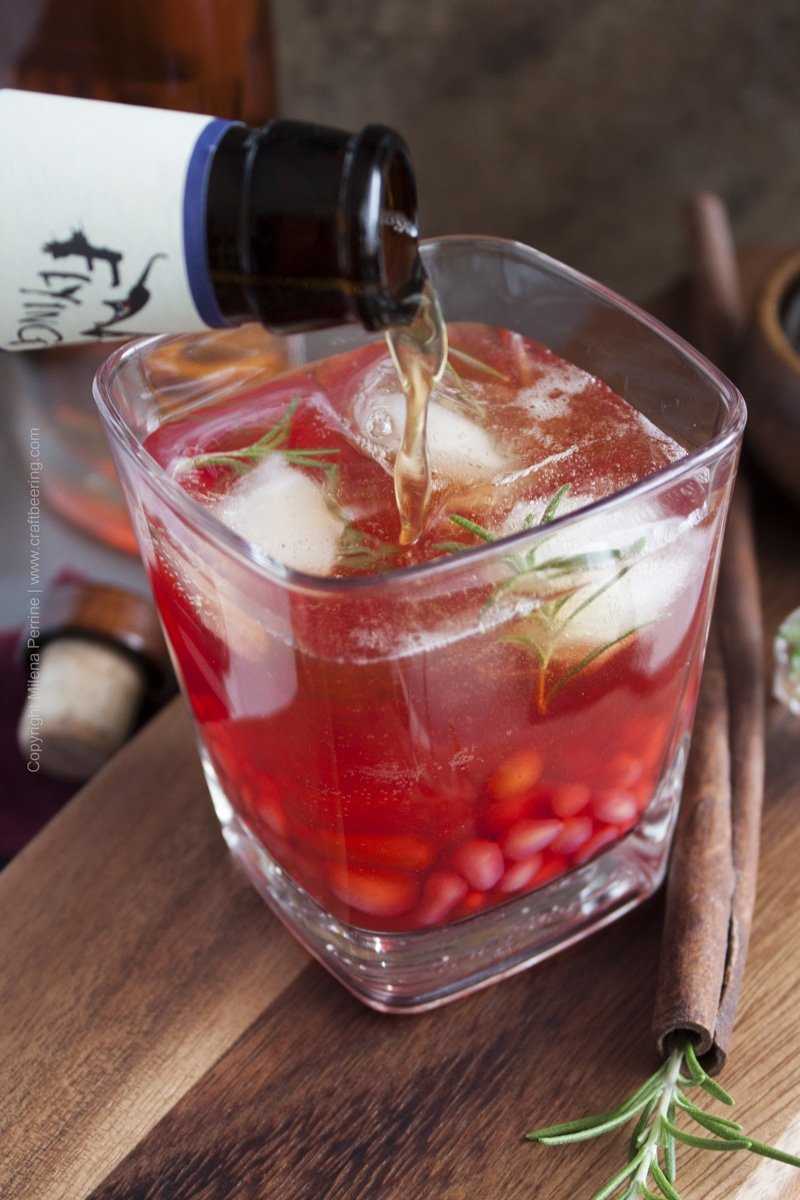 When choosing a beer of your own to mix this bourbon pale ale cocktail stick with the American pale ale style. From there select your favorite bourbon and either use a fresh pomegranate or pomegranate juice ( I love that POM brand even though I rarely buy it, but when I do…:). If you have fresh rosemary handy do make a few ice cubes with it – as the ice melts in the glass the rosemary aromas are released and join those of the pale ale hops.

The bourbon fortifies the pale ale (they are traditionally in the 4.5%-6% range) and boosts the caramel flavor presence. Then the tart and sweet layers of the pomegranate get involved. 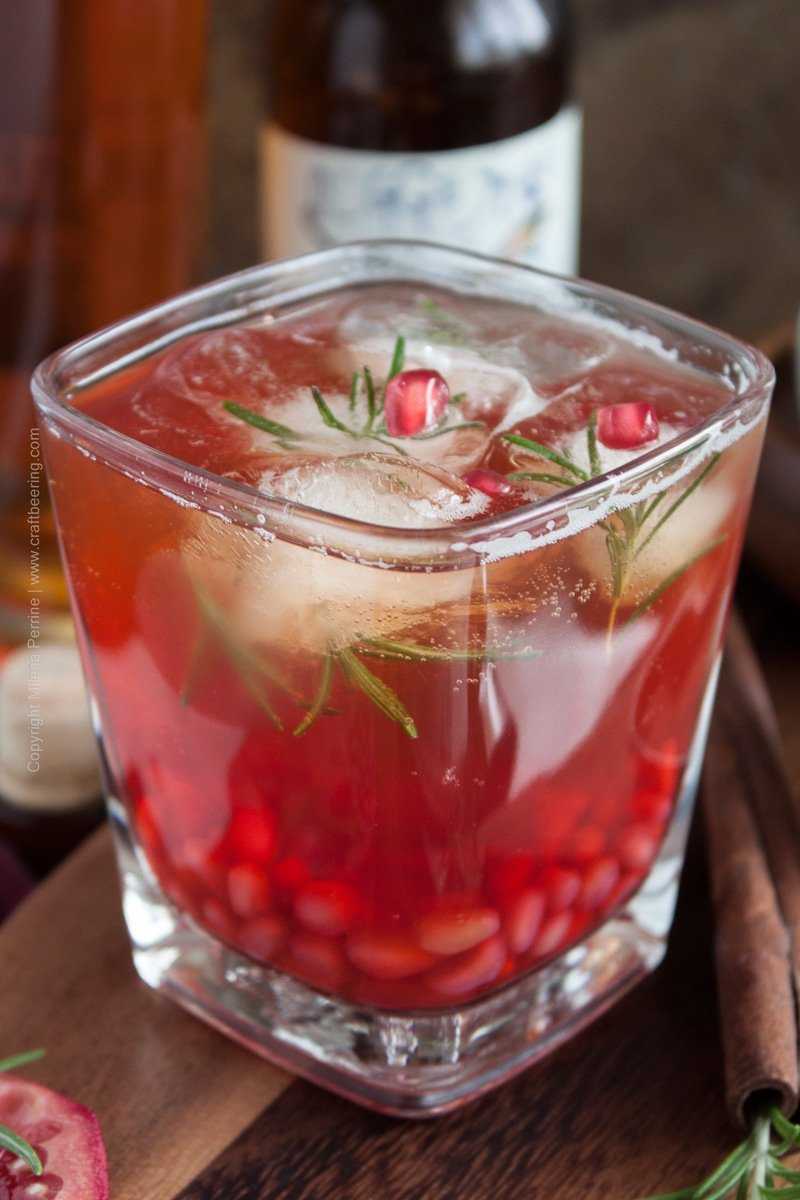 To squeeze the juice from a fresh pomegranate you first need to make sure it is ripe – it needs to feel heavy in your hand (i.e. lots of juice), with a slightly angular shape and have a nicely developed, dark red color. After you cut a small portion off the top and gently split it open, carefully remove the seeds and place them in a fine mesh strainer over a bowl. Press over them with the back side of a spoon to release the juice while the seeds and any skin are trapped.

Keep some of the seeds (clean out the skins thoroughly) and reserve them to place at the bottom of the cocktail glass. Once you drink the bourbon pale ale cocktail grab a small spoon and enjoy the now bourbon awesomeness infused pomegranate seeds as a snack…or maybe dessert? 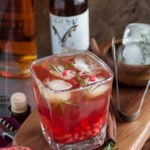 American pale ale fortified with bourbon and infused with the elegant tartness of fresh pomegranate juice. With rosemary ice cubes.