This gorgeous chocolate beer cake came to be because I was pretty convinced that I tasted it in a glass of beer. Recently Chris and I were at this tiny local brewery and sampled their raspberry brown ale (among several other really, really good brews). I had been craving a chocolate raspberry something for weeks. This is how it works with me – I won’t eat anything sweet for days and days until I suddenly have a thought about a specific desert or see something sweet that speaks to me… You can probably relate to what happens next.

Anyways, there aren’t a whole lot of people baking and selling chocolate beer cake with raspberries (sigh)… So I set out to bake one myself, adapting a recipe for a rich chocolate stout cake…(that serves 14 people I should add, or maybe 7 depending on how strongly you feel about the size of your slice). Yeah… 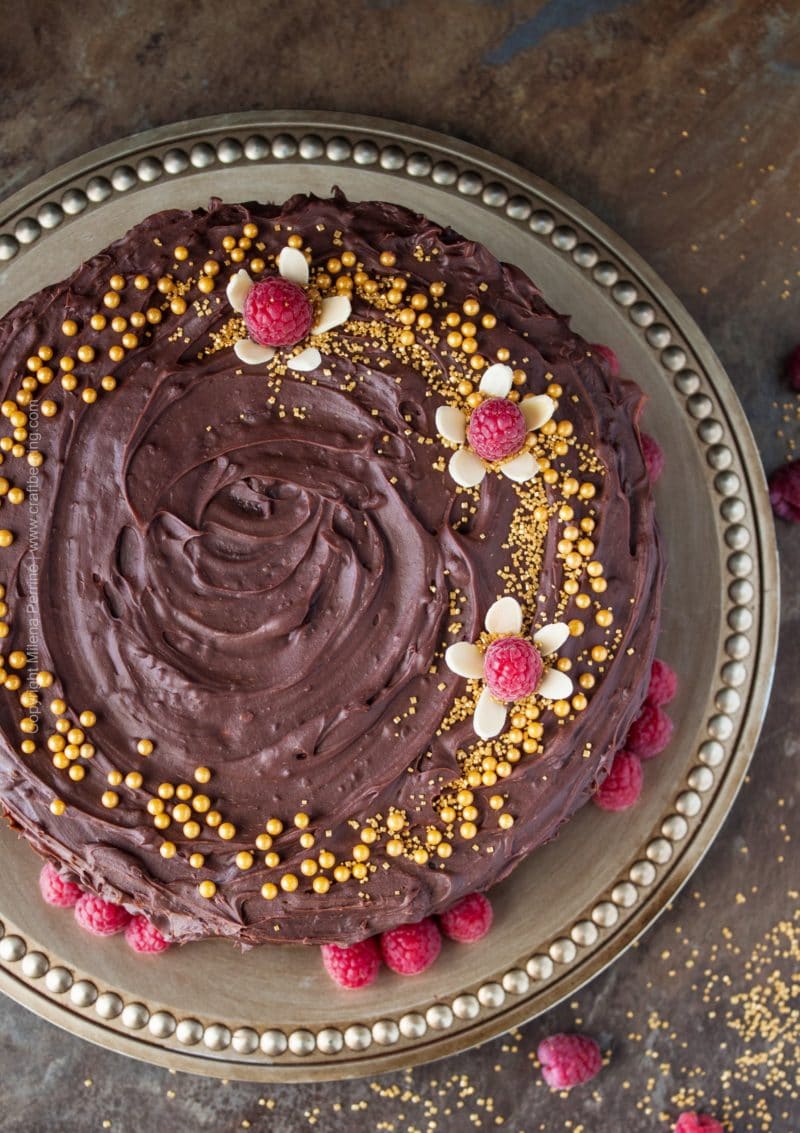 Not only did I replace the stout with raspberry brown ale in the cake batter, I also added two pints of raspberries. And made the chocolate ganache frosting using the ale. Good times!

The raspberry brown ale that inspired this beauty is called Royal Rassy and is brewed on rotation basis by Rally King Brewing here in Fort Collins. It greets with an unmistakable raspberry aroma as soon as the glass nears your nose, but unlike raspberry saisons or raspberry sours, it brings sweet flavors characteristic of chocolate with each sip. Hence I couldn’t help craving chocolate beer cake with raspberries in it.

Royal Rassy has a hint of sourness, practically no bitterness (IBU 15) and a pleasant warmness (even when chilled) courtesy of the solid ABV of 6.7%. At this moment I feel very confident that in the near future Chris will be making us something similar:)

I could get used to having a small bowl of raspberries on summer nights paired with a brown ale that echoes their aroma and mild tartness. If you do not yet know this about me, raspberry flavored beers are way up there on my favorites list…

I was totally surprised as soon as I took out the two 9×2 pans out of the oven. I thought I was going to have to make more ganache frosting given the size of the layers. They had risen so high! Plus, as soon as I made the raspberry brown ale chocolate ganache both Chris and I had to taste it – on raspberries, on almonds, on a clean spoon, and I wasn’t sure that what was left was going to provide adequate coverage. Literally.

It was so hard to wait for the layers to cool off, now that it is warmer it seems like it took forever. Isn’t it so unfair to be able to smell enticing, flavorful aromas and at the same time to restrain yourself from actually eating their source? Probably the only thing harder to wait on is carbonade. All of a sudden I am wishing for some cold weather.

I did have to trim one of the cake layers (fist pump)… So we got a taste before I tackled the decoration and assigned the massive beauty it’s own shelf in the fridge. 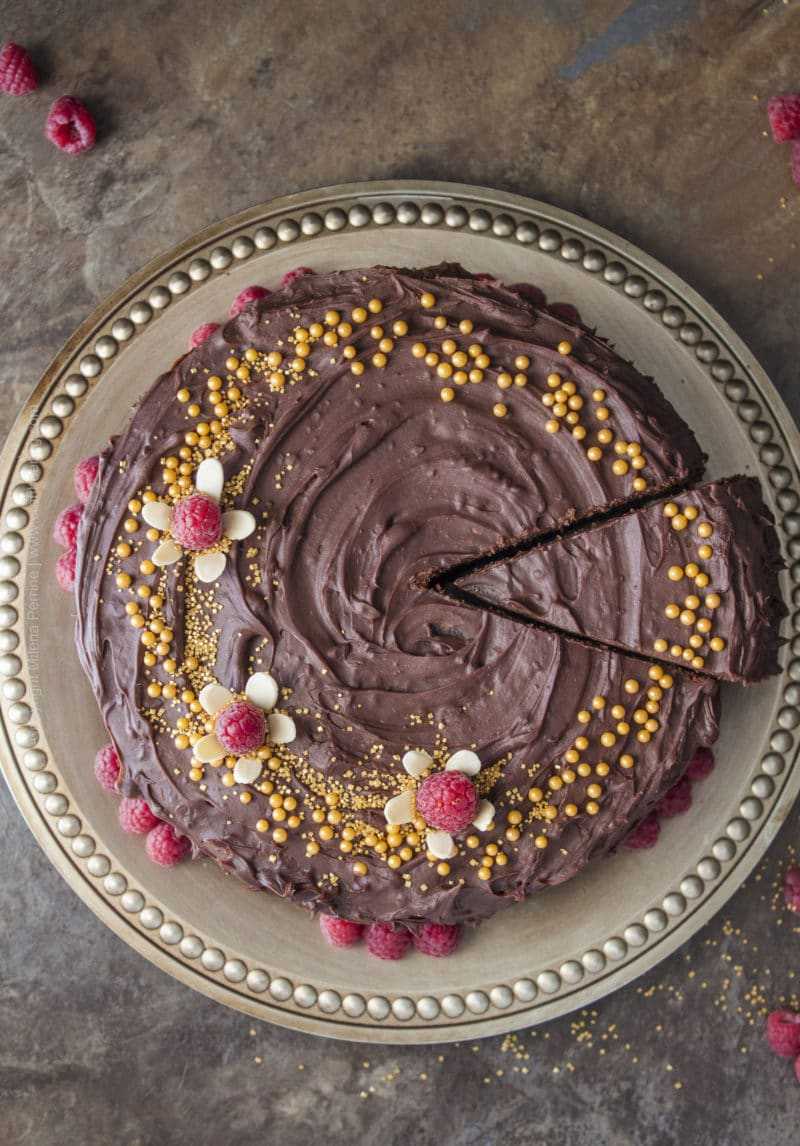 This recipe for chocolate beer cake can be tweaked to accommodate a variety of flavors. For example if you used a coffee flavored porter in the batter and Kahlua + cream in the ganache you’d end up with a whole different flavor profile, while still honoring both chocolate and craft beer. Just saying in case raspberry beers don’t have the same value for you as they do for me:) Cheers! 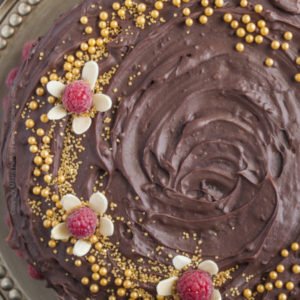 This recipe was adapted from the Food for Your Brew section of the March 2017 Micro Brew News of the Craft Beer Club (affiliate link). 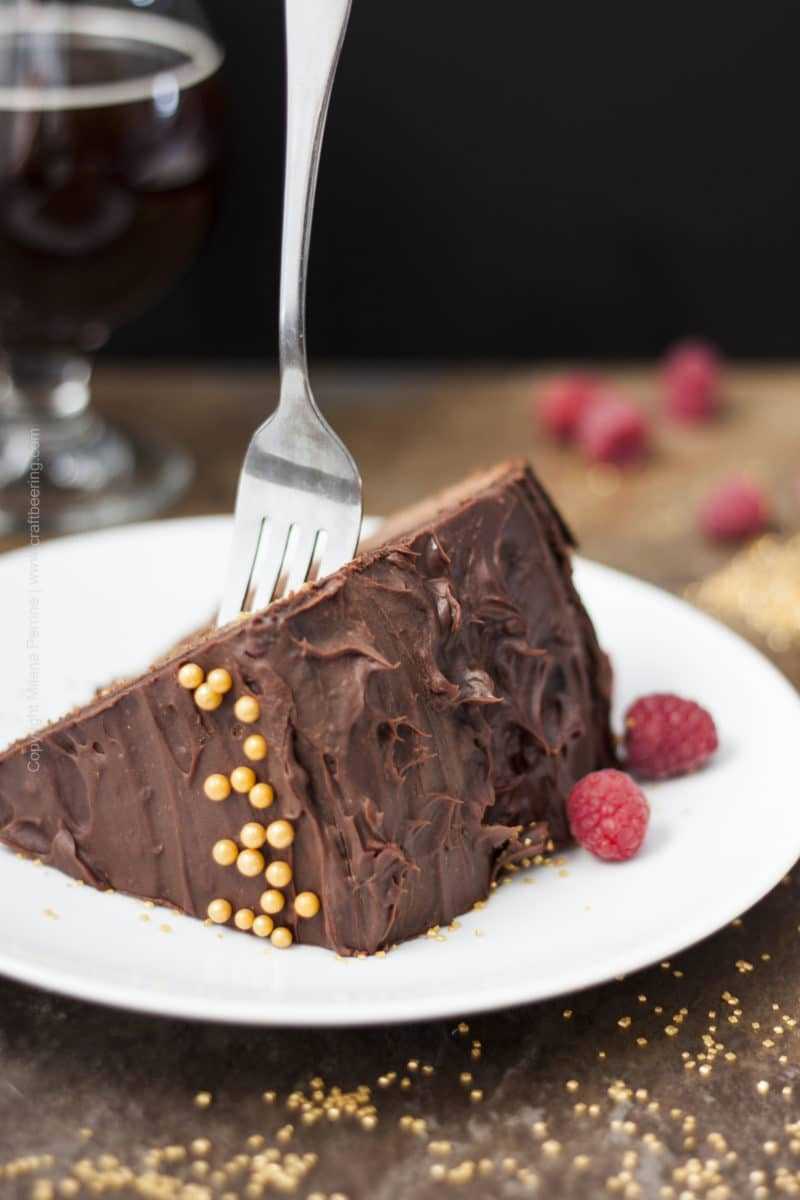