How to cook a cowboy steak in the oven, on the grill or sous vide. Easily master the cut and enjoy rich, juicy meat with an appetizing outer sear. 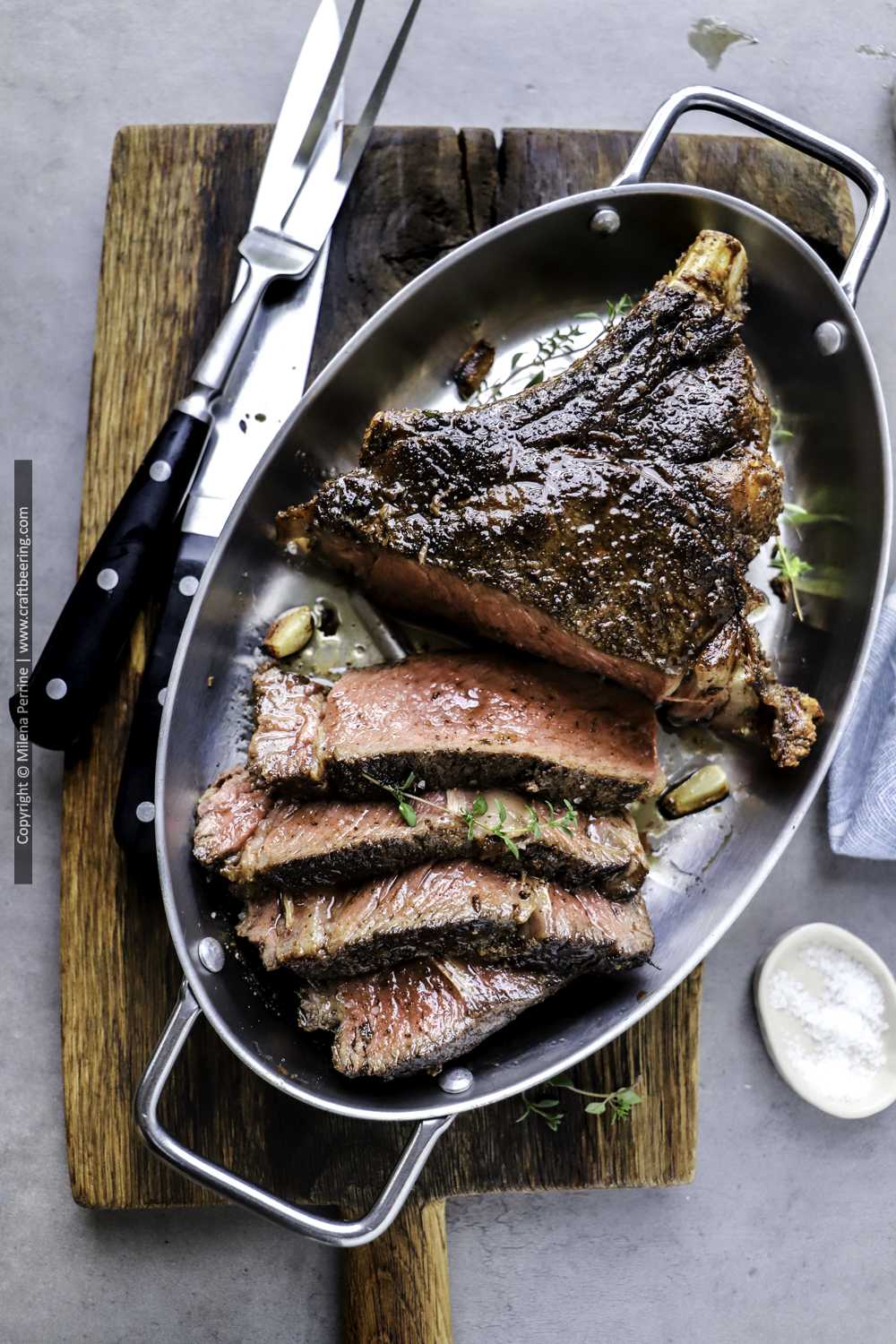 What is a Cowboy Steak?

A cowboy cut steak is a thick, bone-in beef ribeye steak cut from the rib primal cut which sits under the front section of the backbone of the animal. Typically it is over two inches thick and has an average weight of just over two pounds. It has generous marbling the source of which is the longissimus dorsi muscle aka eye of the ribeye, the second most tender muscle in a steer. Hence the cut is tender, juicy and rich in flavor.

Why is it called cowboy steak? There isn’t a definitive answer. Popular lore explanations vary. Some suggest that it is big enough to satisfy a cowboy’s huge appetite, others that a cowboy can easily hold it by the bone and bite into it. Nobody really knows. To complicate matters other names for it include rugged cowboy and Delmonico (even though the latter is boneless, otherwise almost the same cut).

How is it different from Tomahawk steak? The only difference between a cowboy ribeye and a Tomahawk ribeye is the length of the bone. The latter has at least five inches of Frenched rib bone and often up to eight. The cowboy steak has only a short, often Frenched bone.

Price and where to buy one. Because when you buy a cowboy cut ribeye you are not paying for the extra long bone of the Tomahawk, it is often more attractively priced per pound. You can find the cut quite easily at meat departments of big grocery stores, butchers and online beef sellers. 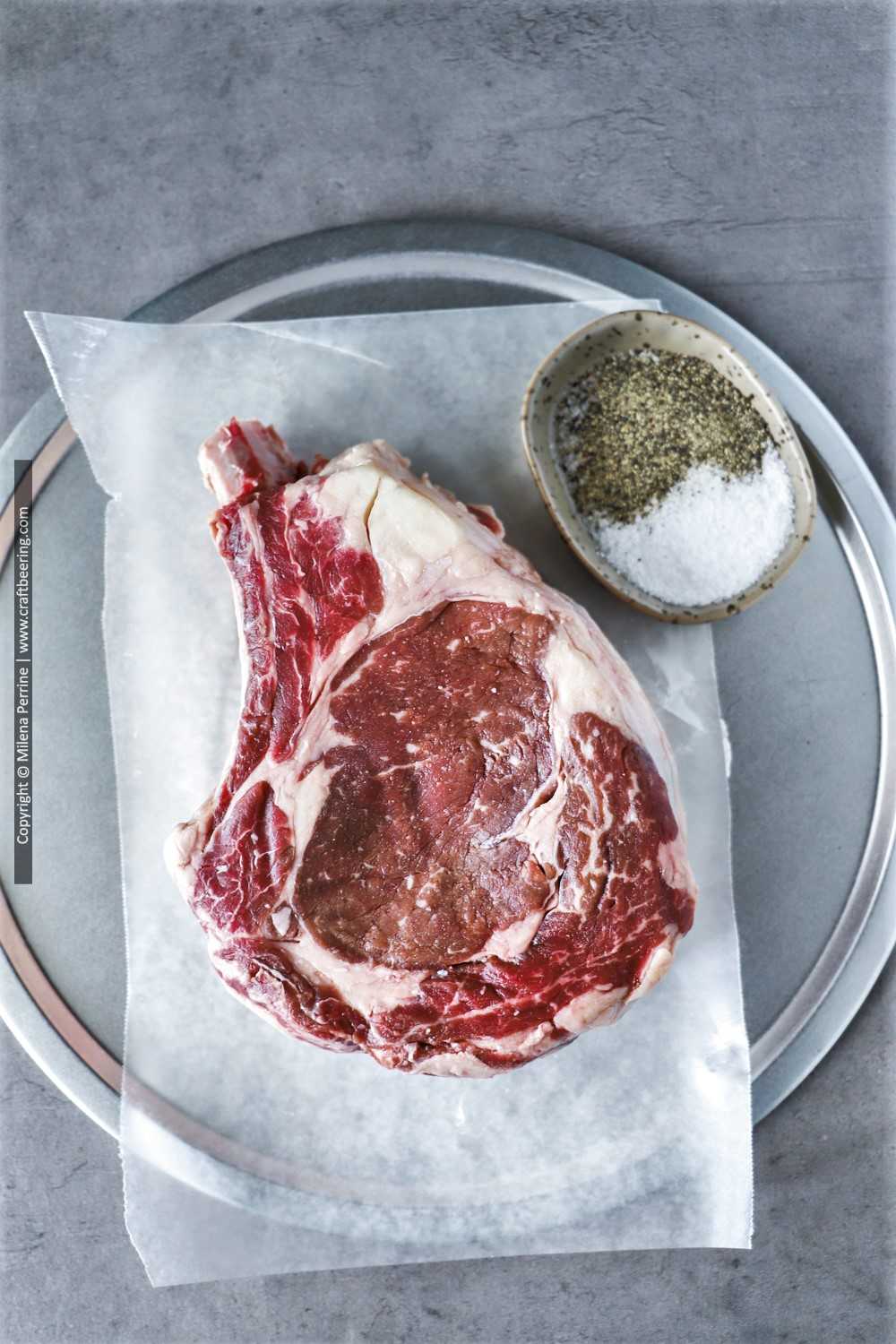 How to Cook a Cowboy Steak

A perfect cowboy cut ribeye is evenly cooked on the inside and has an appetizing sear on the outside. This is achieved by allowing enough time for low and slow cooking inside, followed by (or preceded by, depending on the technique) a short period of browning the outside at high temperature.

All the different methods of cooking a cowboy steak involve these two distinct stages, but their order and the means through which they are achieved varies.

The main ways to cook a cowboy ribeye include:

The reverse sear method illustrated with step-by-step pictures below is often considered the most professional way to prepare a cowboy ribeye steak because it is widely used in restaurants. We also explain the other methods and include them in the Recipe Card at the end of this post.

Here the steak is first seared well in a hot skillet on the stove top or the grates of a hot grill. After that it is finished in the oven until the desired temperature is reached.

With this method the stages of the classic oven approach are reversed, hence the name.  After the low and slow cooking in the oven the steak is seared in a skillet or on the grill. The skillet, ideally should be cast iron. Adding a bit of butter to the oil contributes to a beautifully colored crust on the exterior. 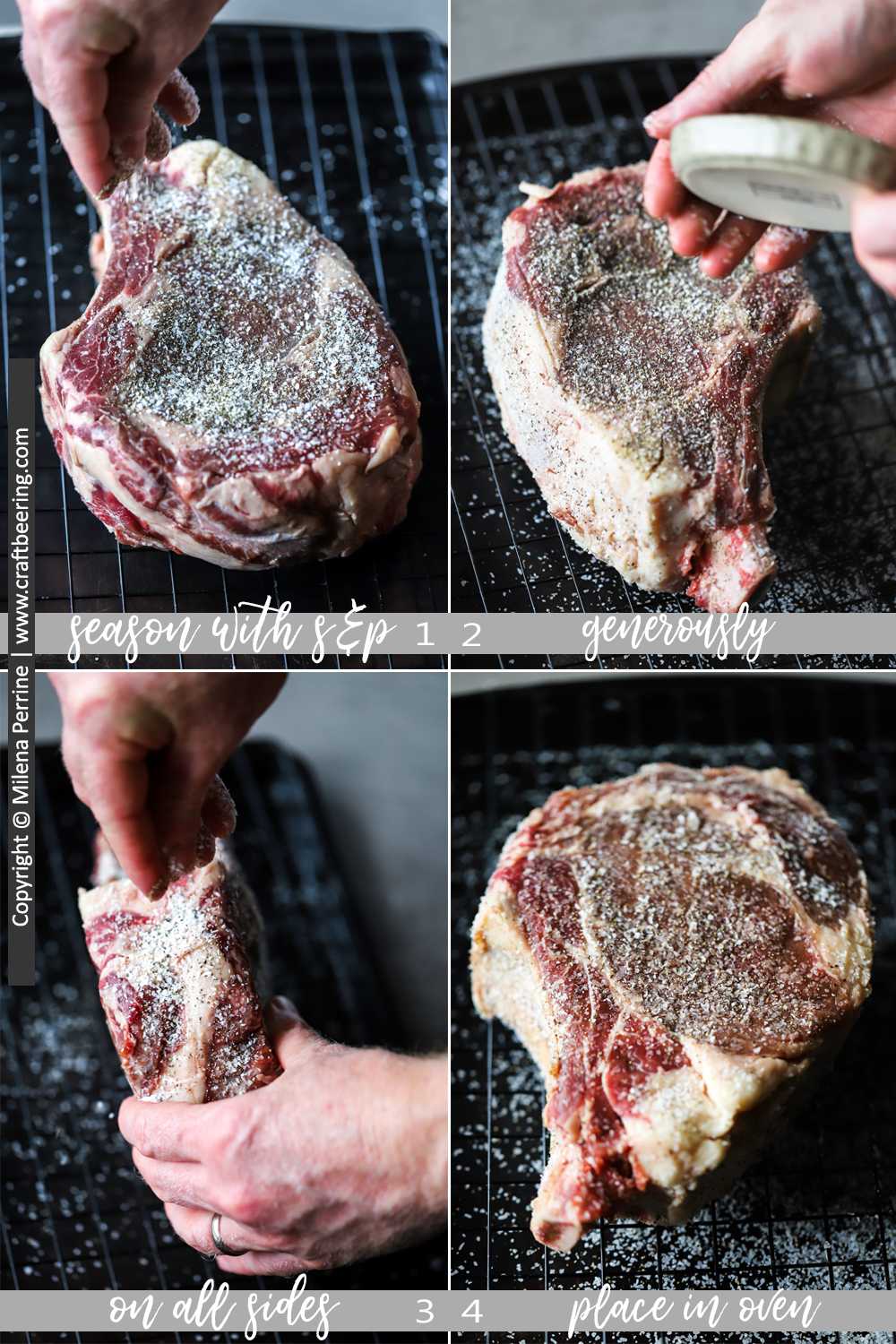 Prep the ribeye. Bring the steak to room temperature and season it generously with salt and pepper.

Slow cook in oven. Preheat oven to 275-300 F. Cook steak until it reaches about 110-115 F, flipping it once as you check the temperature. Stick thermometer into thickest part away from the bone. Remove from oven and proceed with the hard sear. You can rest it briefly at this point or after the hard sear, but due to slow cooking the rest is not mandatory.

Sear (in skillet or on the grill). Heat a cast iron skillet over medium-high, add olive oil and butter, a couple of garlic cloves and herbs and sear the steak. Baste with butter, turn and baste the other side, do this until it reaches your desired doneness.. Alternatively, heat a grill to hot, brush steak with olive oil and sear on all sides until your desired temperature is reached, turn frequently.

A Note on Oven Cooking. If you are short on time you can absolutely increase the oven temperature to 350 F and even 400 F for both the classic and reverse sear methods. This has been a common practice in restaurants when hungry patrons do not have the patience to wait for a steak to be cooked low and slow. You will need to watch it closely to catch it at the necessary temperature before you pull it out of the oven, whether before hard searing it or before it is finished. Only do this if you do not have enough time to wait for the steak to cook at lower oven temperatures – low and slow always produces more tender and juicier beef.

The indirect heat method involves cooking the steak away from the heat source. You will need to turn it and flip it frequently so that different parts of it are close to the heat and it cooks evenly. Once the 110-115 F temperature range is reached, you rest the steak and then you sear it over hot grates to finish the cooking process.

For a step-by-step illustration of how to go about indirect grilling a cowboy steak on a charcoal grill  check out the image sequence here. The steak used for the demo is a Tomahawk, but the workflow is identical.

With this method a seasoned cowboy ribeye is vacuum sealed and cooked in sous vide water bath with a preset temperature (120 F is a good choice). Once the temperature is reached the meat does not cook any further, even if you keep it in the water bath for a few extra hours. When ready to finish it you can either hard sear it in a skillet as shown above or a hot grill. Sous vide gives you the most uniform temperature throughout the entire cut but you really need the sear to create extra flavor dimensions through the Maillard rection. 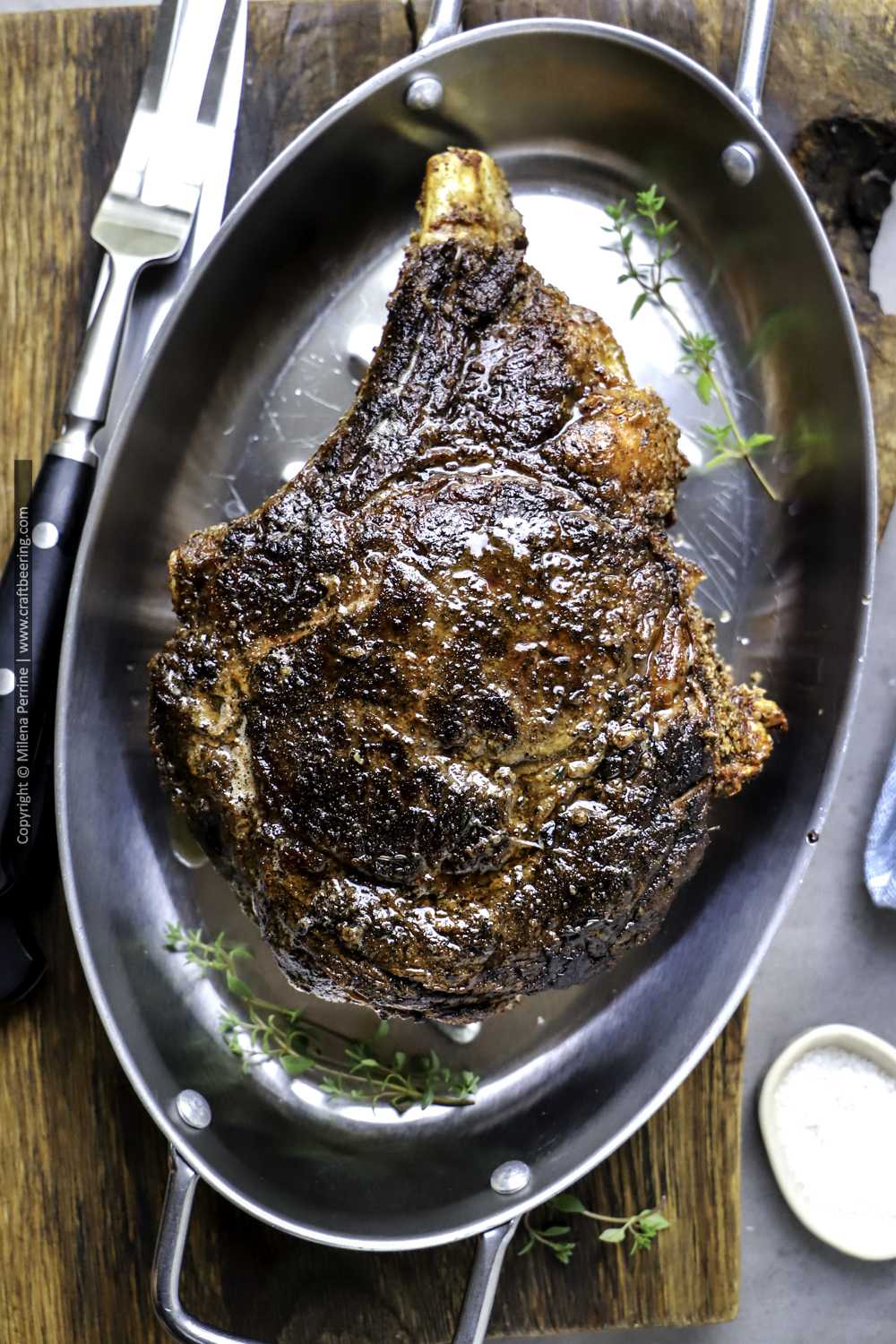 You can use the following guidelines to reach the doneness of your choice. They relate to the final stage of cooking, whether it is a sear or oven cooking with the classic method. 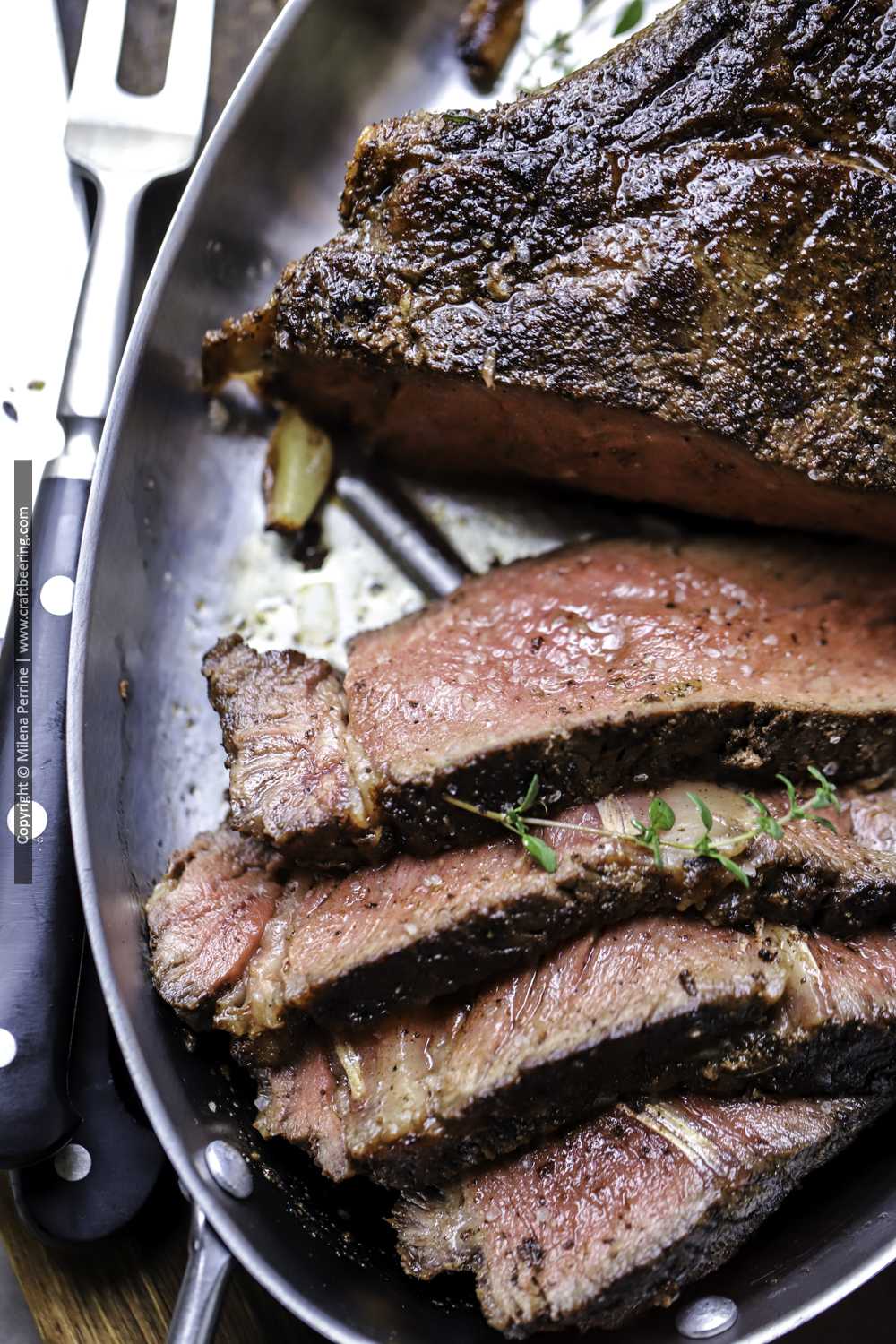 PREP FOR ALL METHODS

If frozen, thaw the cowboy steak in the fridge for 2 days. Remove it from the vacuum packaging and thoroughly pat it dry.

Allow it to come to room temperature for about 1 hour. Generously season all sides with salt and pepper.

Heat 1 tablespoon of cooking oil over medium-high heat in a large skillet. Sear the cowboy ribeye for about 2 minutes per side. Also sear it around the perimeter.

Pull out the steak and rest it for 10-15 minutes before serving.

Place the seasoned cowboy steak onto the rack of a roasting pan, placed over a baking sheet. Cook it until the internal temperature measured with digital themometer in the center of the steak registers about 110 F. Flip it once in the process.

Heat cooking oil and butter in a cast iron skillet over medium-high heat. Add the garlic and thyme, move around a bit. Add the steak and sear it on all sides, flipping every 30-60 seconds until the desired brownness and doneness are reached. Baste with the pan liquids.

Place the seasoned cowboy steak on the grate away from the direct heat and close the lid.

Indirectly grill flipping every 5-10 minutes, side to side and end to end, until the internal temperature reaches 125 F. In this manner all sides of the cut are nearer to the heat source at intervals, yet never directly over it.

Crank up the heat (you may want to turn on a second burner) to high. In the meantime temporarily remove the steak to a plate and cover it with foil to keep warm. When the grate is really hot place the steak directly over a hot burner to sear it. Flip it every 30-60 seconds for about 3-5 minutes until the desired level of browned crust forms and the temperature for your desired doneness is reached (135 F for medium-rare).

Remove from the heat and rest for 10-15 minutes before serving.

Light charcoals in chimney and when hot pour on one side of the grill, effectively creating dual heat zones. Close the grill and allow the internal grill temperature to reach the 225-250 F range.

Place the seasoned cowboy steak on the grate away from the direct heat so that it can cook gradually. Every five minutes or so open the grill and move it – rotate it 45 degrees, then flip it over and again rotate 45 degrees. Continue to indirectly grill in this manner until a meat themometer registers 100-110 F when inserted in the thickest part, away from bone.

Temporarily move the steak to a plate and cover it with foil to stay warm. Add about half a chimney of hot coals (start these in advance while the steak still has not reached 100 F).

Once the grate is really hot sear the ribeye directly over the charcoals, flipping every 30-60 seconds or so until desired bronwness and temperatures are reached.

Rest the steak for 10-15 minutes before slicing.

Preheat a sous vide water bath in appropariately sized container to 120 F (for rare or medium-rare, 130 F for medium or higher).

Sous vide the steak for 2 to 3 hours until the preset temperature is reached. When ready to sear, remove vaccum bag, pat dry and season again (only lightly this time).

Sear on the grates of a hot grill over direct heat, flipping every 30-60 seconds until the desired level of browned crust is achieved and the internal temperature of desired doneness is registered. Alternatively, hard sear in a skillet with oil and butter as described under the reverse sear method.

In general the temperatures for doneness of a cowboy steak are as follows:

Note that cooking time depends on a multitude of factors - from precise steak size and weight to selected method and the temperature of the low and slow component of the two stage cooking process. Because of the dramatic variations in cooking times check the temperatures often - this is your best guideline.