Recreate the famous Berlin currywurst with our tips for the most suitable types of sausage and an easy to follow recipe for authentic currywurst sauce (curry ketchup). 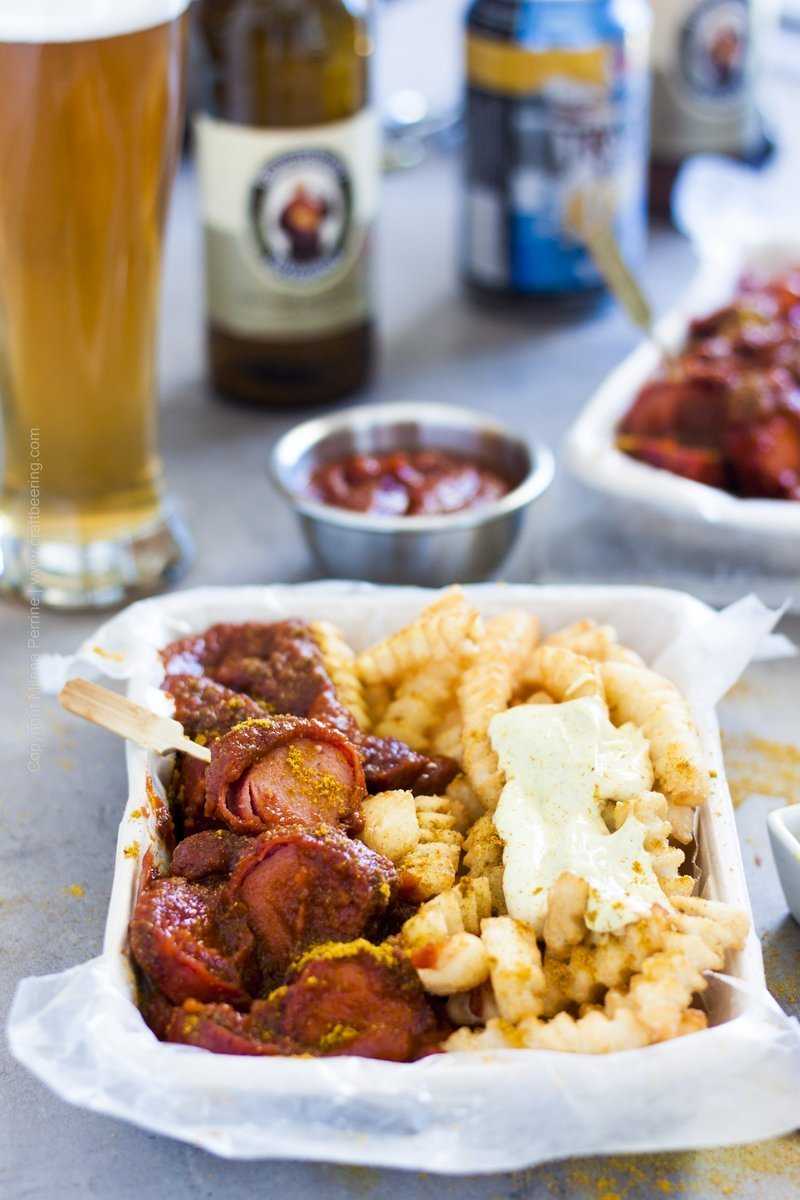 Currywurst and fries are a perfect accompaniment to flavorful German beers.

About This Currywurst Recipe

Currywurst is Germany’s most popular street food. It originated in Berlin as a fast snack (Schnellimbiss) and eventually spread to other cities.

Nearly a billion currywursts are sold annually throughout the country at venues such as Imbissbuden (concession stands), Biergärten and increasingly more often at sit-down restaurants.

In a nutshell the key features of currywurst are: 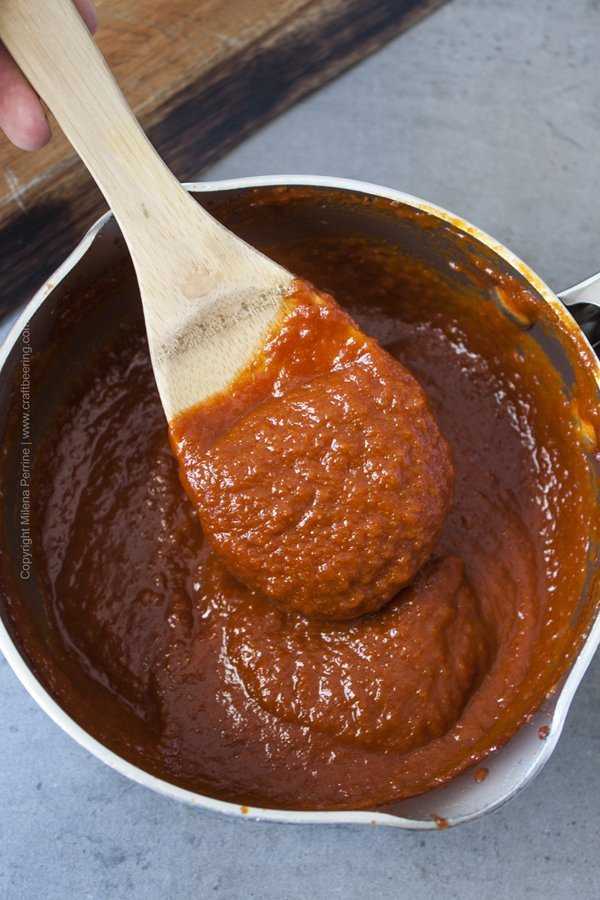 The currywurst sauce that essentially turns a bratwurst into a currywurst is a mix of tomato puree or ketchup, mild yellow curry and other spices, sugar and vinegar.
You can always buy curry ketchup  – truth be told most Germans do not make theirs from scratch and many contemporary stands also use certain well-known brands.
But if you’d rather try your hand at the real deal sauce – it is easy to whip up a batch.

How to Make Curry Ketchup

You should note that an official recipe for a currywurst sauce does not exist.

Herta Hauer, the resourceful woman credited with the creation of the delicacy in 1949 never shared her original recipe (see Historical background below).

Hundreds of competitors tried to recreate it over the years resulting in hundreds of recipes. Contemporary patrons often favor a specific Imbiss stand because of their particular currywurst sauce variation.

That being said there are several ingredients which are essential to the famous curry sauce. 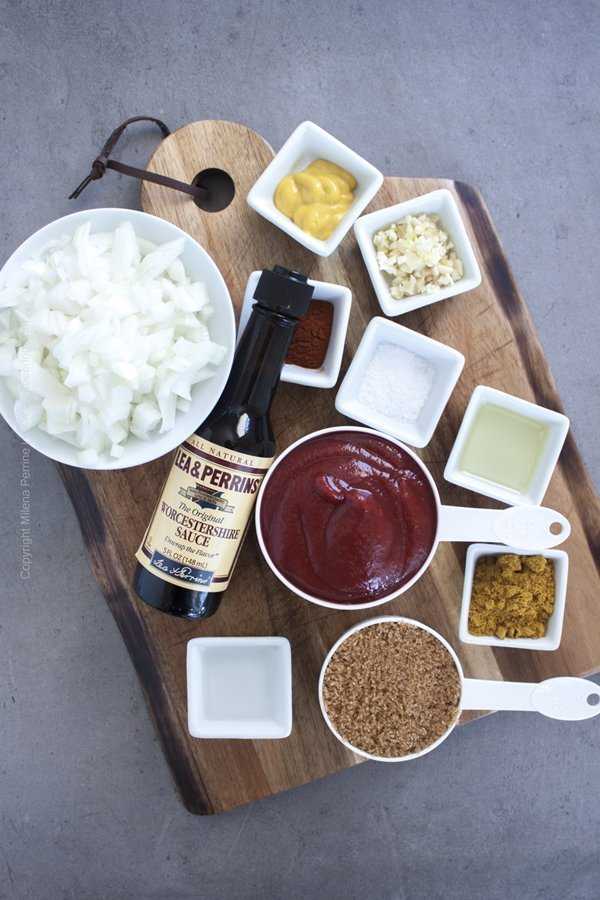 We’ve based this recipe on the one from The German Cookbook by Alfons Schuhbeck and it tastes very close to the currywurst pork sausages we’ve enjoyed in Germany.

TIP: Use a deep sauce pan so that you can easily blend the sauce with an immersion blender at the end. Currywurst sauce should have body rather than being thin. 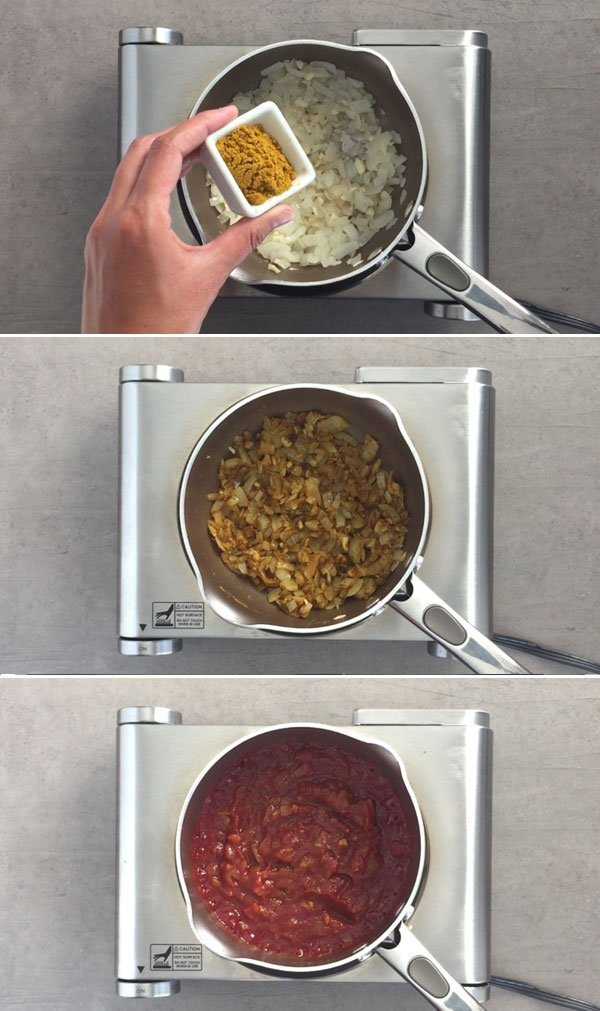 TIP: We recommend that you use a mesh splatter guard as pureed tomatoes/ketchup always bubble up too vigorously.

To tweak the flavors until you find that perfect combination you can use:

As to the exact quantities and proportions – simply experiment to discover a version that best pleases your palate. You can also skip the diced onion and minced garlic and start by warming up ketchup then adding the rest of the ingredients. 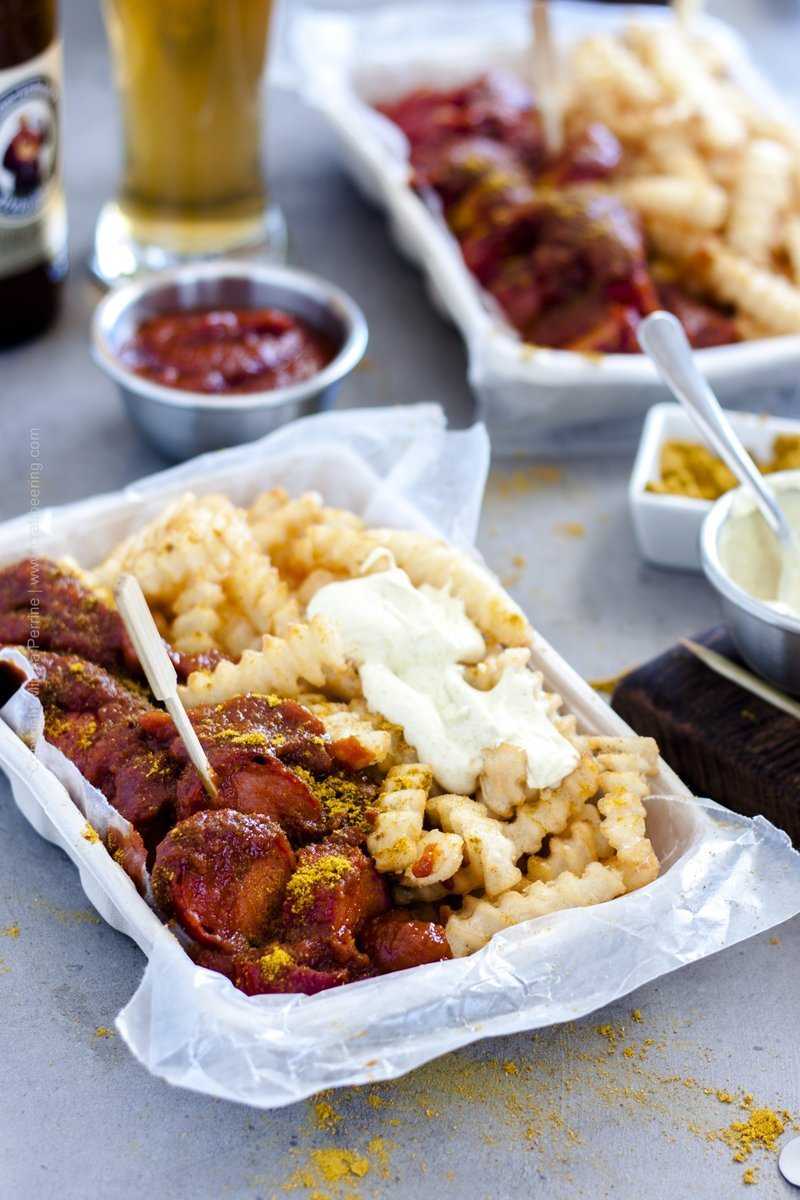 What Type of German Sausage to Use?

The original currywurst used a sausage made of pork, bacon and water, piped into pork casings. It was boiled and then deep fried.

Today it is made with various mild-flavored, fine-textured veal, pork or a veal/pork combination sausages, usually pre-cooked. It is either grilled or fried.

To recreate authentic German currywurst in the US we recommend that you do not use the widely available raw, meaty ground pork bratwurst from Wisconsin – this is not the correct type of sausage.

The following options are relatively easy to find.

Or simply go to a butcher or specialty food store with a selection of German sausages and ask for something suitable. 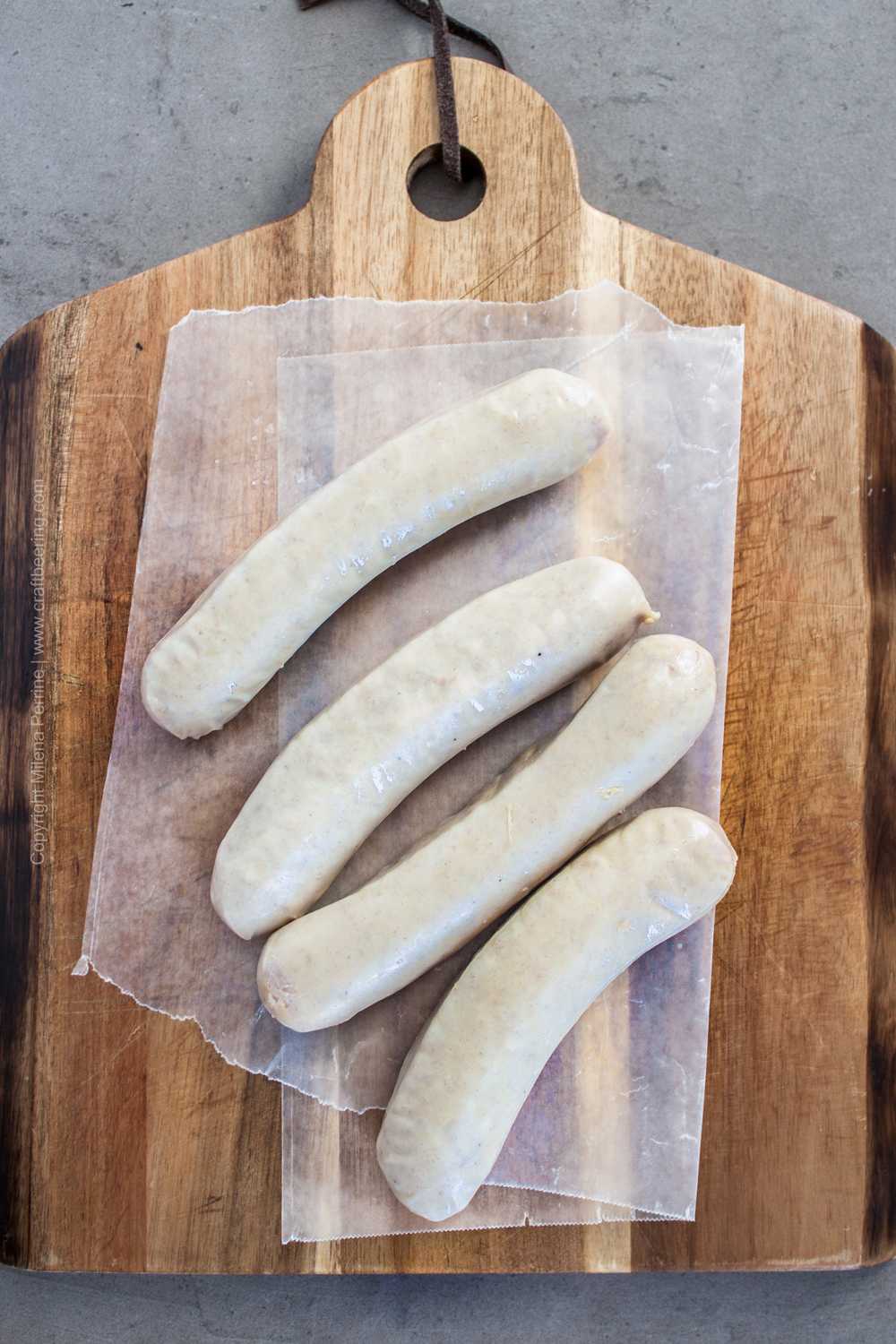 How to Cook the Wursts

If the sausage you procured is not pre-cooked, simmer it in water first.

You can either pan-fry or grill the sausage until the skin gets very crispy on the outside – this is key.

Then cut into chunky slices – about 8 is considered optimal.

TIP: If pan-frying the wurst be sure to use enough oil in order to get crispy skin and either use a splatter screen and/or cut small slits on the surface of the sausages. 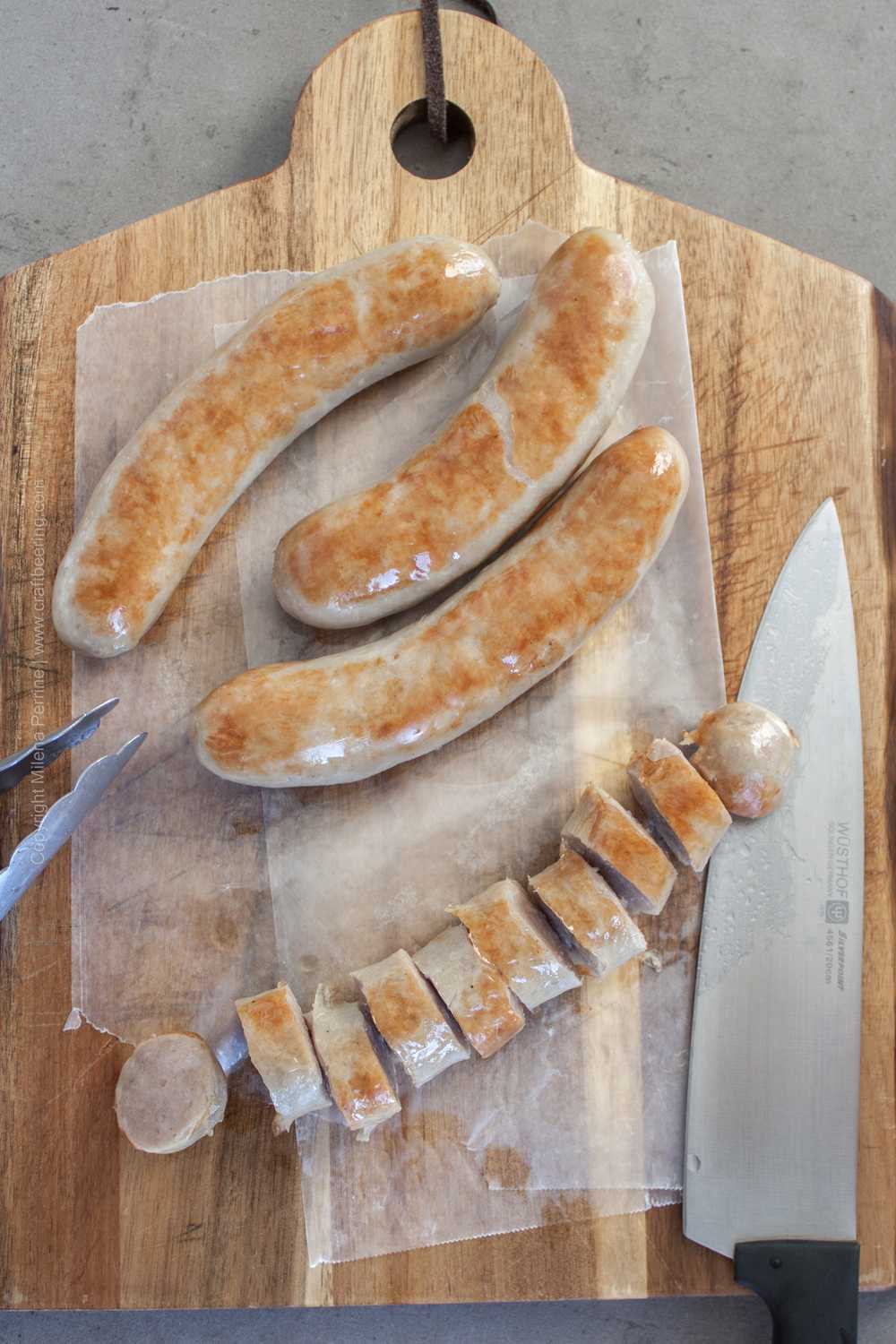 Cut the wurst in bite-sized pieces and transfer to a paper tray or plate before you smother it with curry ketchup.

When currywurst is served with fries as opposed to Brötchen it is very common for the fries to be accompanied by their own pommes fritte sauce or simply a generous dollop of mayo.

TIP: We like to mix a bit of curry powder with mayonnaise and add a squeeze of lemon juice to brighten it up. It becomes a great dip for the fries. 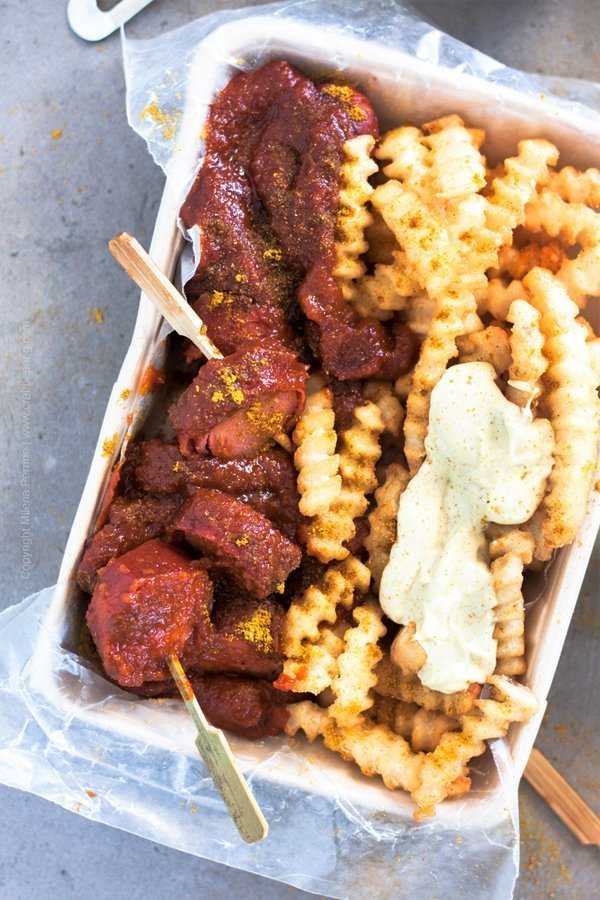 Wood or plastic mini forks are typically served with currywurst.

Where is the Best Currywurst sold?

Of course in Berlin! Even though it has become vastly popular around the entire country, Berliner currywurst remains the gold standard.

Most vendors have their own recipe for curry ketchup which guarantees variations in the overall flavor. Identifying the best currywurst stands is tied to personal taste preferences and virtually impossible, but some have tried to organize top 10 types of lists nevertheless.

If you happen to be visiting Berlin in the near future, here are a few ideas for best places to taste currywurst.

If not using immediately store the curry ketchup refrigerated in an air tight container once it has cooled down. It will save well for about a month.

Currywurst is the creation of a German lady by the name of Herta Heuwer who lived in Berlin. In 1949, in post-war Germany times were hard and few food items were available.

The resourceful house-wife is believed to have engaged in small trade with British soldiers who offered her ketchup, English curry spice and Worcestershire sauce for booze. She added curry to the ketchup along with other spices and concocted the famed currywurst sauce which she served over bratwurst.

The dish became an instant hit and she started selling currywursts to the workers who were rebuilding the city. Soon enough she opened her own food stand selling the dish, located near Checkpoint Charlie in Berlin Mitte and ran it until the 1970s.

The curry ketchup covered sausage became so popular that it soon attracted competitors, who tried to emulate the recipe and ended up creating numerous versions of it. The dish spread across Germany to become a well-loved street food, especially in big cities like Frankfurt and Hamburg.

Frau Heuwer never told anyone what the exact recipe of her curry ketchup was, reportedly not even her husband. She died in 1999. Currywurst remained as a shared culinary heritage of all of Germany.

For a period of time there was even a museum devoted to currywurst in Berlin. The Deutsches Currywurst Museum actually closed down permanently in 2018 but until then attracted about 350,000 thousand visitors annually.