Fries with grated feta are a staple kind of beer garden snack in Bulgaria. They are one of my most favorite craft beering snacks ever. Even though they may sound quite ordinary they are not and it is on you to assume that:). 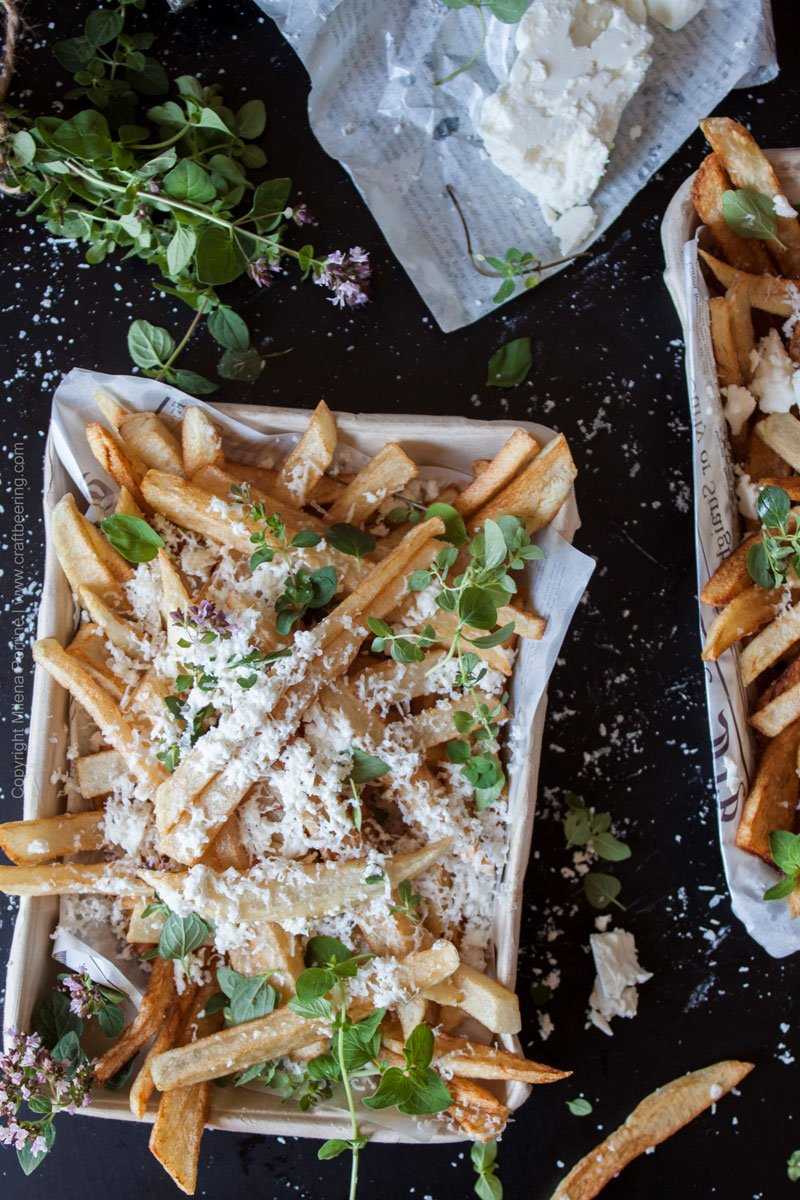 Beer and fries are beyond a classic combination to me. When you first start drinking beer in Bulgaria, hand cut fries with feta cheese is what you pair it with eight times out of ten. It’s called meze – foods you snack on before you eat your meal. Sort of like appetizers here. The word has oriental origins, part of Bulgaria’s five hundred years of Ottoman yoke.

The combination of fries with feta and beer is so ingrained in the culture and customs of the country that it reminds me of the status a glass of cold milk and cookies occupy here in the USA. Nowadays the fries may no longer be hand cut, but back when I was growing up it was the norm. All kinds of eateries – from bier-gardens to snack bars and fancy restaurants would hand cut their fries.

And don’t even start me on the feta cheese… Bulgarian feta is betta🙂 From sheep’s milk. Your loss if you never try it. 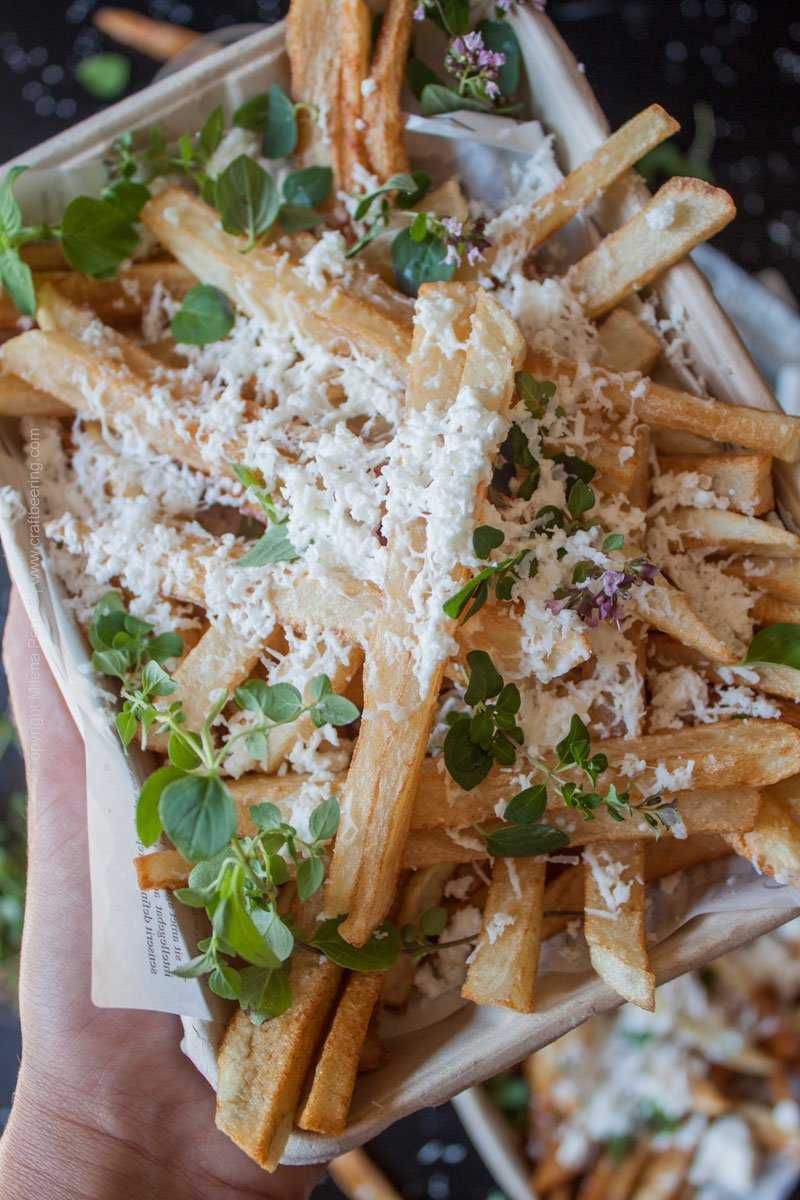 I have mentioned before that even though the legal drinking age in Bulgaria is eighteen, the very concept of it was generally considered non-sense when I was growing up. I mean, beer is the national beverage. Everyone drinks beer and is surrounded by people who do and it is just not a big deal. Alcohol doesn’t have an ‘off limits’ allure (or should I say tint) to its appeal…

Teenagers do not binge drink in secret on the weekend because all they have to do if they really wanted to have a beer is ask their parents and they will most likely get a glass of beer or wine with dinner. I recall many instances when my grandfather offered me a glass of red wine before I even reached eighteen. He had a small vineyard and every fall the whole family would participate in the process or making the wine for the winter.

For a long while I was puzzled by my family’s bizarre assumptions – why on earth would I want to drink bitter beer or not that sweet wine when I could have apple juice or fizzy lemonade? What was wrong with them to even consider such a possibility? And if you must know – I never had a craving for alcohol and I never rolled around under the bar stools at bars such as I’ve seen many of a just turned twenty-one young adults do here. Somehow when a thing is not forbidden, you warm up to it gradually and start liking it only if it’s likable to you.

(I included our awesome uKeg growler in this photo shoot:) Looks beautiful next to the hand cut fries.) 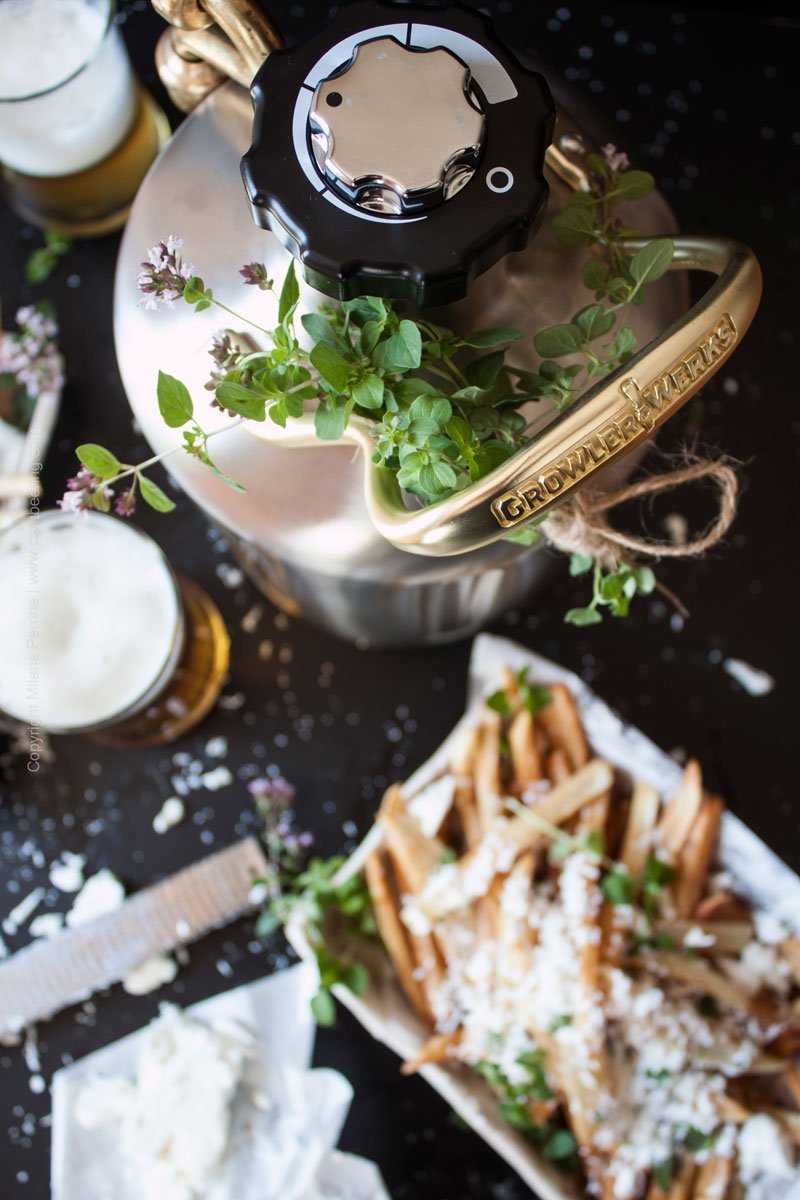 These very likable hand cut fries with feta cheese and oregano taste sooo good. First of all, the potatoes have been chilled for a few hours while soaking in water and before being fried twice.

Second, have you fried fries in olive oil before? The resulting flavor is out of this world. Rather, it is from another part of this world:) Third, fresh oregano is especially well suited as an herb to complement the fries and feta combo. 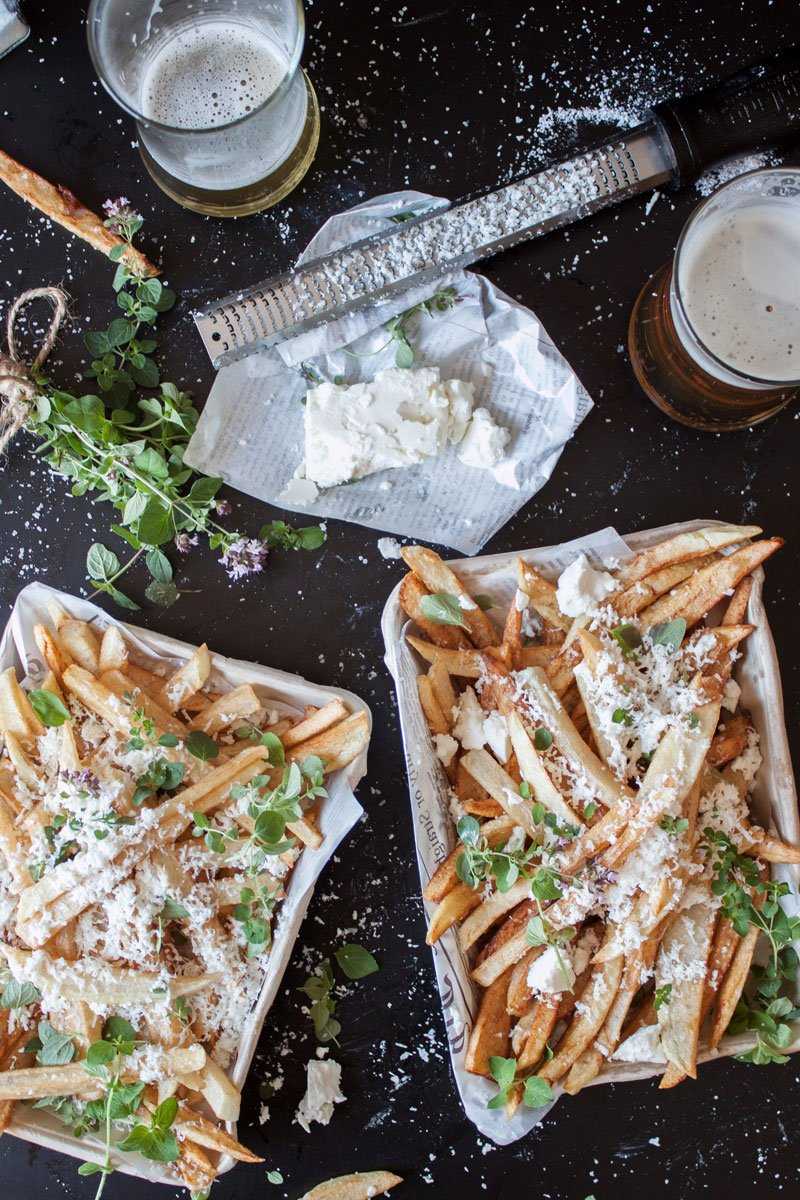 I recommend lagers along the lines of Pilsners, Dunkels and Helles for the best pairing with this meze. Next, reach out for an IPA. Then go from there and find the beer that delights you the most. Why not a saison? And you cannot go wrong with a weissbier.

Before I leave you with my super simple recipe, I will admit to it. Sure, I’ve given in to bagged store bought fries cooked in the oven.  Many more times than I can count. It is convenient.

Our kiddo doesn’t eat them however. Only Chris and I. Our boy seems to have a pretty good sense when it comes to food. He likes fries that were hand cut from an actual raw potato and then fried in olive oil.

One time when he was two and a half we stopped at Euclid Hall in Denver to taste some beers and ordered the Pad Thai pig’s ears, the bruleed beef bone marrow and some brats. We got him the kid’s chicken nuggets with fries. He had neither one, but boy did he keep pointing at the pig’s ears. We let him eat as many bites as he wanted (they come super thinly sliced and are nice and crispy, mmm). Since he was born he has consistently been amazing us with his food choices. A wild ride we won’t trade for the world.