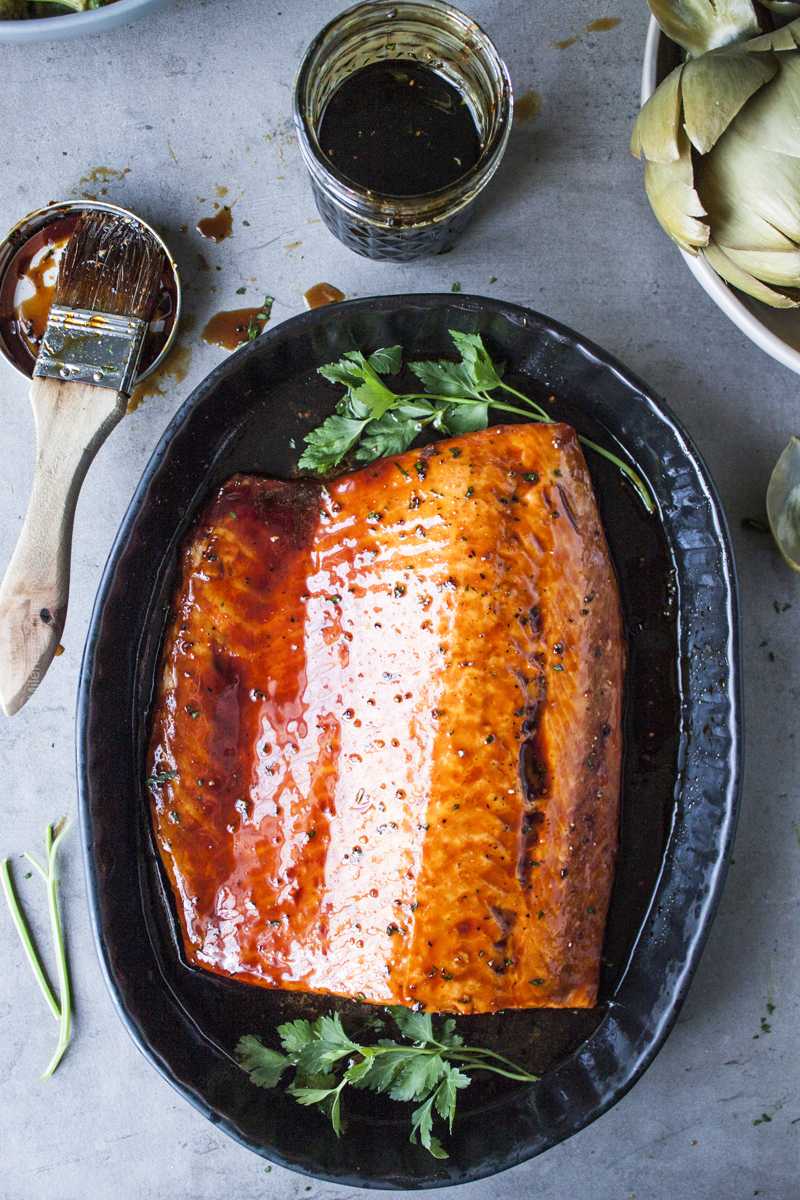 Go straight to the Recipe Card or
Read on for relevant tips, process video and pictures (2 mins)

About This Irish Salmon Recipe

We love the ease of baking a salmon fillet, especially when preparing a casual buffet style meal for friends of family. One of our favorite ways to add flavor to the fish is to use a glaze.

We make an authentic Irish whiskey sauce for that very reason. The recipe comes from Darina Allen’s Traditional Irish Cooking and while the original sauce was intended to accompany crispy bacon chops (breaded pan-fried Canadian bacon steaks) it works beautifully as a glaze for salmon or ham. 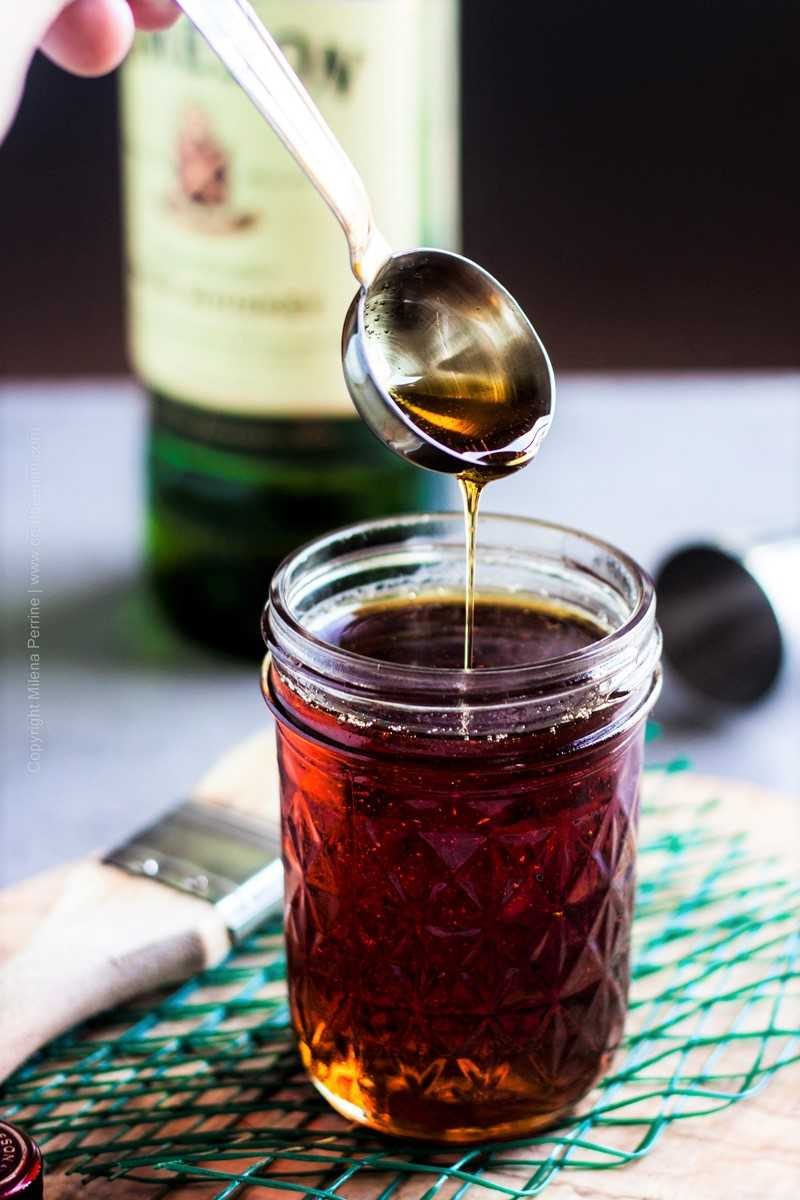 How to Prepare this Whiskey Salmon – Workflow 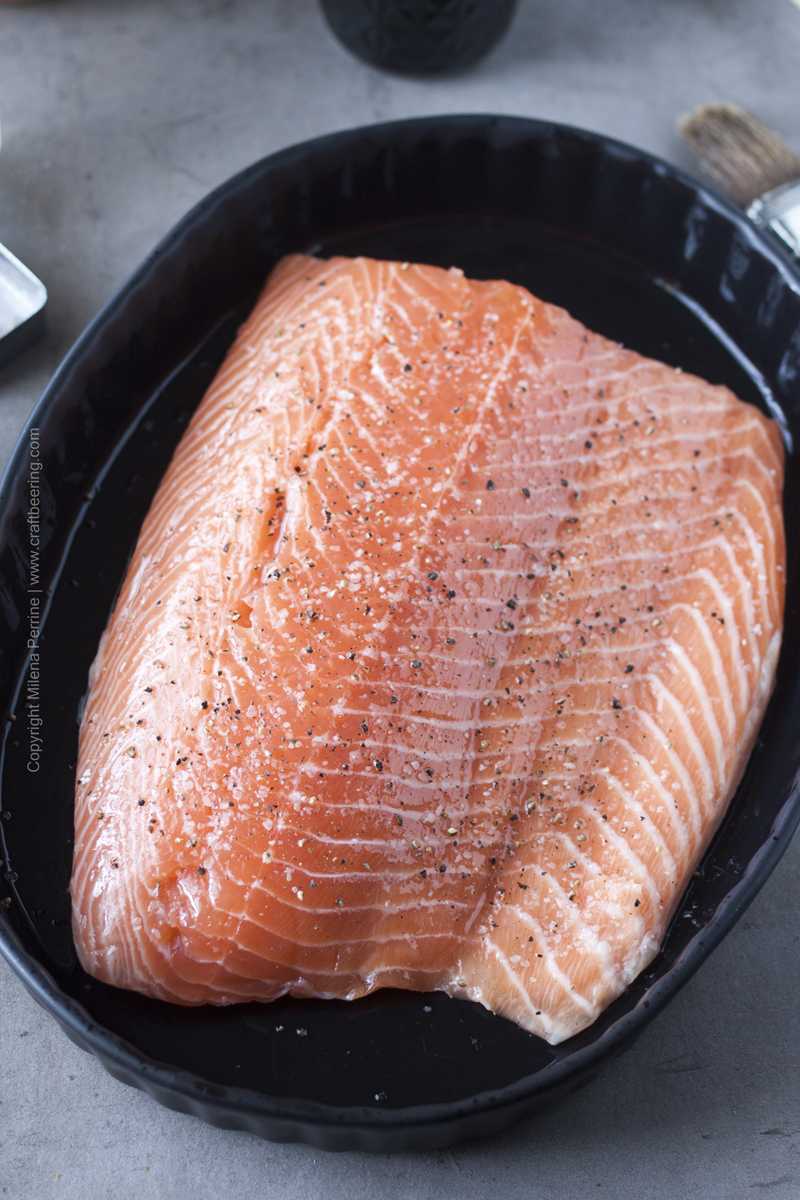 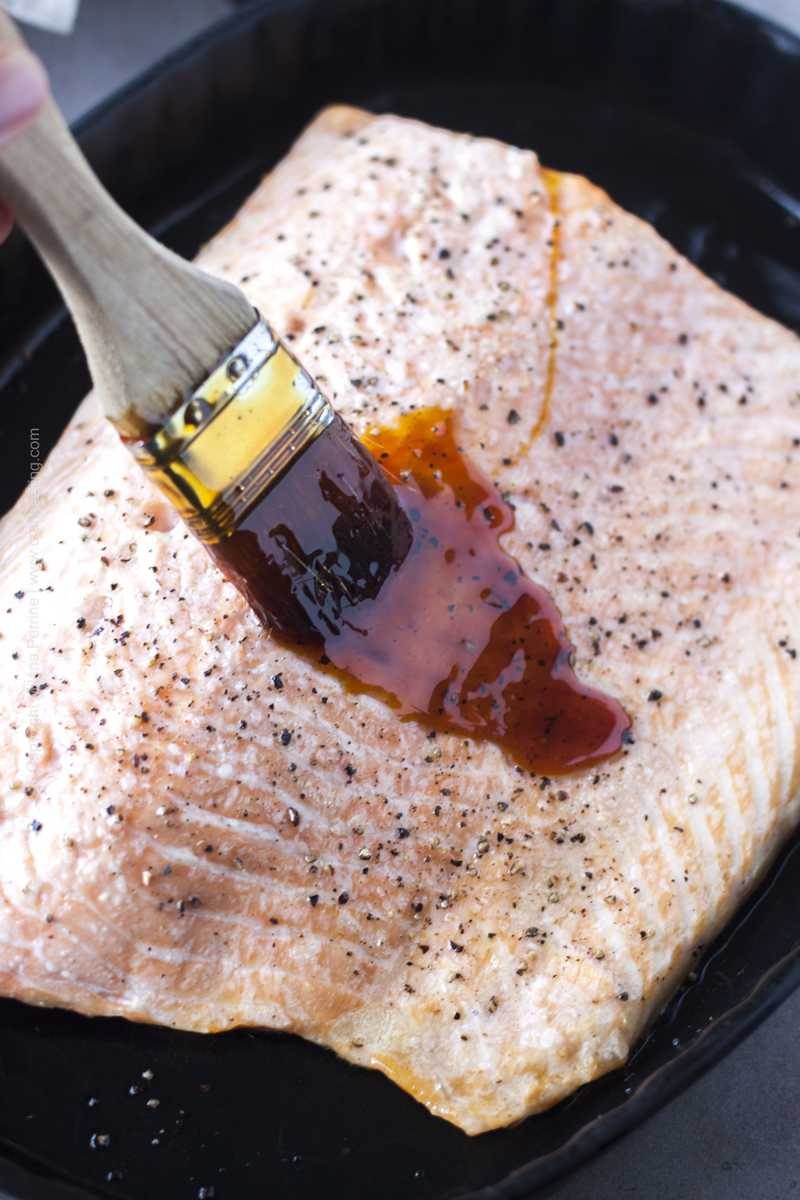 The exact time will depend on the calibration of your oven and the overall size and thickness of your fish. It should be done in about five minutes after you first take it out to apply the glaze, perhaps a tad longer.

The salmon is cooked when the internal temperature measured in the thickest parts reaches 145 °F.

Once out of the oven brush the salmon with more of the whiskey glaze. Serve extra sauce, warm or cold, for those who want to indulge and drizzle a bit more over their serving of tender fillet. 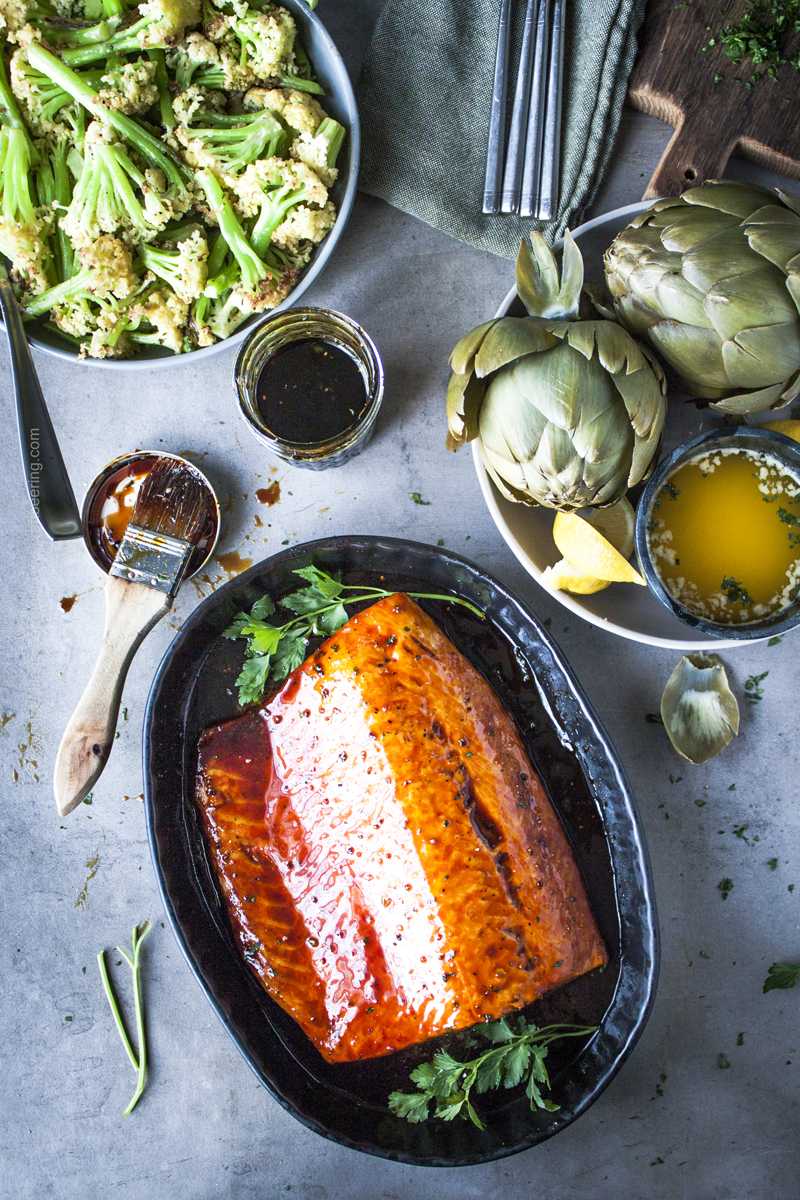 In keeping with the Irish whiskey theme we like to dish up traditional Irish veggies that partner well with salmon.

Buttered leeks and sauteed asparagus are very complementary as well as sauteed spinach. So are cauliflower (in this case we sauteed baby florets) and artichokes (simply boil them in salted water until tender, then serve with melted butter).

The dish is also perfect for St. Patrick’s Day parties – not only is it easy to prepare but it plays on an old Irish myth. Everyone appreciates a delicious meal with a good story behind it – be sure to share this one with your guests.

St. Patrick and the Salmon

According to ancient legend* it was no other than St. Patrick who gave salmon, the fish of knowledge, its ability to jump.

One day the missionary was walking by a river. On the opposite bank were a couple of fishermen who happened to be non-believers (refused to be baptized by St. Patrick and wanted nothing to do with him).

They called out to the holy man to sit down and rest while they caught a fish for him. He agreed.

Every time the fishermen caught a fish instead of giving it to St. Patrick as promised, they threw it in their basket, laughing. Then as St. Patrick stood up to leave, they called at him to wait – the next fish they caught would be his.

Several times they mocked the saint in this manner and several times he regarded them patiently.

When they caught a large flounder, it too wanted to mock the saint. It twisted its head to look backward, towards him, and sneered its mouth. St. Patrick then said: “May your head and mouth always remain like this!” And to this day flounder has a grotesque mouth and a twisted head, with both eyes on one side of it.

Just as St. Patrick was getting ready to leave the river bank for good a huge salmon leaped out of the water and landed right in his lap. He said: “I bless you with the gift of jumping high.” And to this day salmon can jump better than any other fish.

*Legend retold from A pot o’ Gold – a Treasury of Irish Stories, Poetry, Folklore and (of Course) Blarney by Kathleen Krull. Affiliate link.

Make the glaze first and have it ready before you handle the salmon. You can make it the day before if you wish. Store at room temperature.

1. To a cold sauce pan add the sugar and the cold water. Stir over gentle heat until the sugar dissolves. Increase the heat to medium-high and bring to a boil. Do not stir once boiling. Put away your stirring utensil.

2. Let boil until the color changes to a dark amber (or golden brown) and it begins to smell like caramel.**

3. Remove from the heat and VERY CAREFULLY add the hot water. (Wear kitchen gloves to protect your hands as you do so - there will be vigorous bubbling and sugar splatters are guaranteed.)

4. Allow the bubbling to subside, measure out the Irish whiskey and add it. Move the sauce pan back to the stove, bring to boil and boil for 1-2 minutes. The alcohol will mostly burn off and the sauce will be infused with beautiful spice, wood and faint vanilla notes.

You can let the sauce cool down for a minute or two. Stir around if needed. Transfer to an appropriate container.

1. Preheat oven to 400 F. Brush a baking dish or sheet with oil and set aside.

2. Pat dry the salmon and examine the flesh for any small bones. Place in the greased baking dish, skin side down. Brush the flesh with olive oil and season with salt and pepper.

3. Bake for 10 minutes and take it out. Brush with Irish whiskey sauce and place it back in the oven. Check the temperature in the thickest parts of the fillet after about 5 minutes, using a meat thermometer. Salmon is done when the internal temperature reads 145 F.

4. Brush the baked fillet with more of the Irish whiskey glaze and serve family style.

*Assumed serving size is about 5 oz of fish per person. The baked salmon is presented family style and served accordingly.

**Initially it will seem that it is taking too long for the boiling sugar to even turn yellowish, but once most of the water evaporates, color will change quickly. Do not let the sugar burn.