How to make Irish mashed potatoes with green onions aka Irish champ. 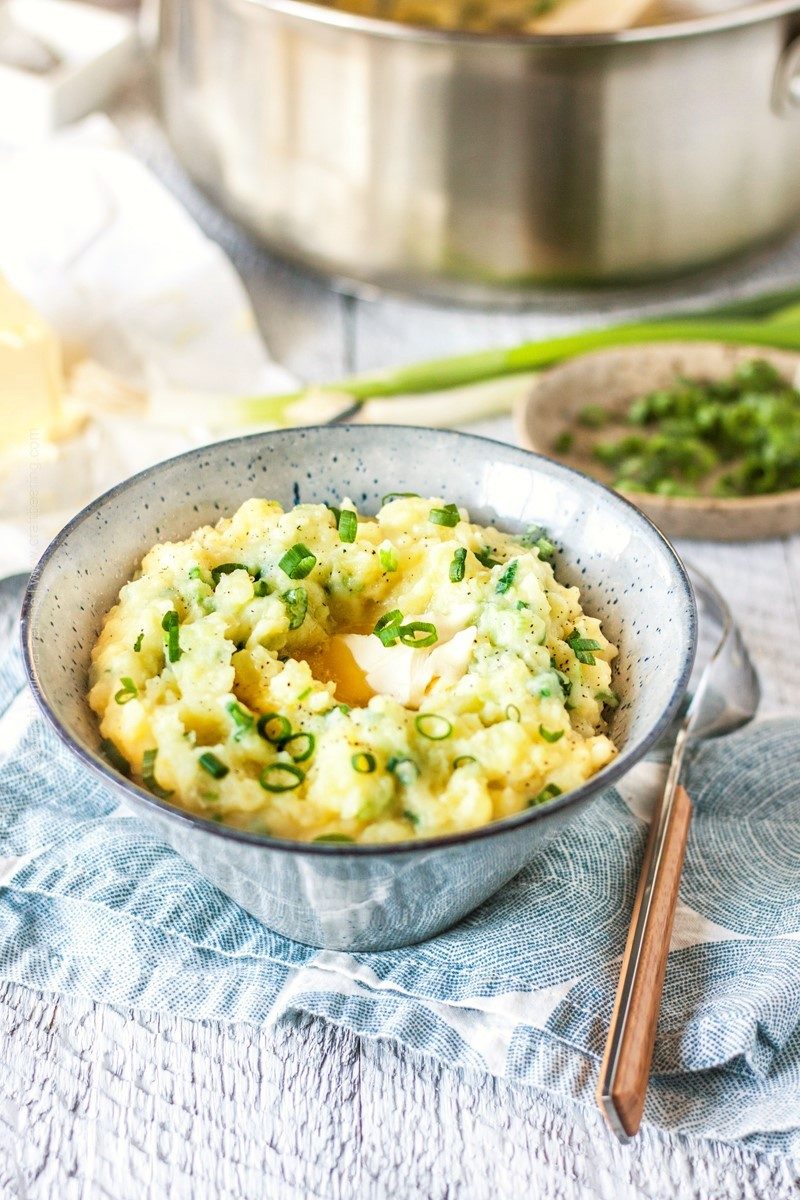 Champ is traditionally served with a knob of butter placed in a center ‘well’.

What is Irish Champ Potatoes?

Champ is a classic Irish mashed potatoes side dish with green onions, warm milk, butter, salt and pepper. It’s origins are in today’s province of Ulster, Northern Ireland. The old Irish Gaelic name for Champ is brúitín (translates to mash). Some people also call it poundies because in the past the potatoes were mashed with a big pounder.

The heavy wooden pounder (in some areas called a beetle) was typically handled by the man of the house. Big Irish families boiled large pots of potatoes and mashing them to a smooth consistency required strength.

Champ is an important part of Irish culinary tradition and a staple side on modern Irish pub menus, even restaurants in trendy cities like London and New York.

In the past nettle was added to the mashed potatoes instead of scallions or chives and overall the dish was regarded as unrefined, peasant fare.

During Samhain it was customary to place a bowl of Champ outside – near a tree, a field post or under a whitethorn bush, as an offering for the fairies to feast on.

Samhain was a pagan Irish Gaelic harvest festival with Celtic origins and was celebrated each year around the eve of October 31st, to mark the beginning of winter and the end of harvest. Eventually the pagan tradition was incorporated into Christian holiday practices and was attached to All Saint’s Day and All Soul’s Day to eventually evolve into Halloween.

To this day Champ is enjoyed on Halloween, along with its cousin Colcannon (made with cooked cabbage and/or kale). 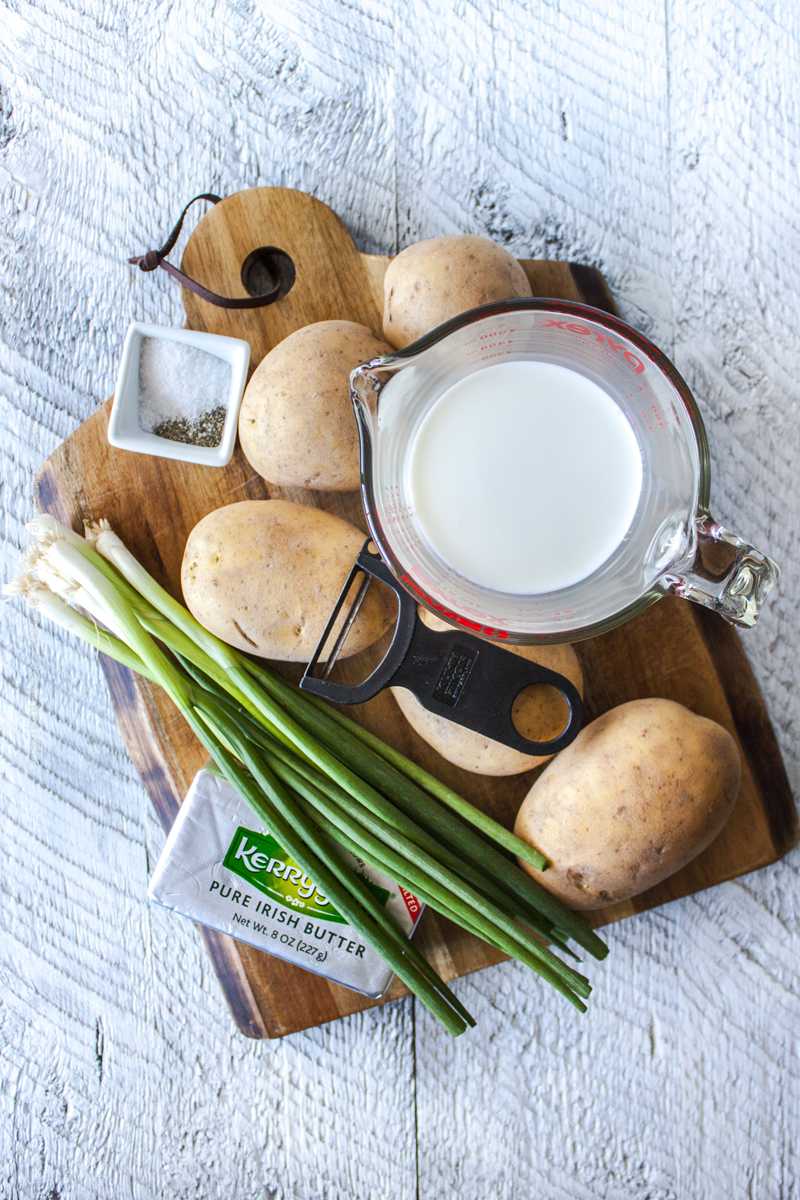 How to Make Champ 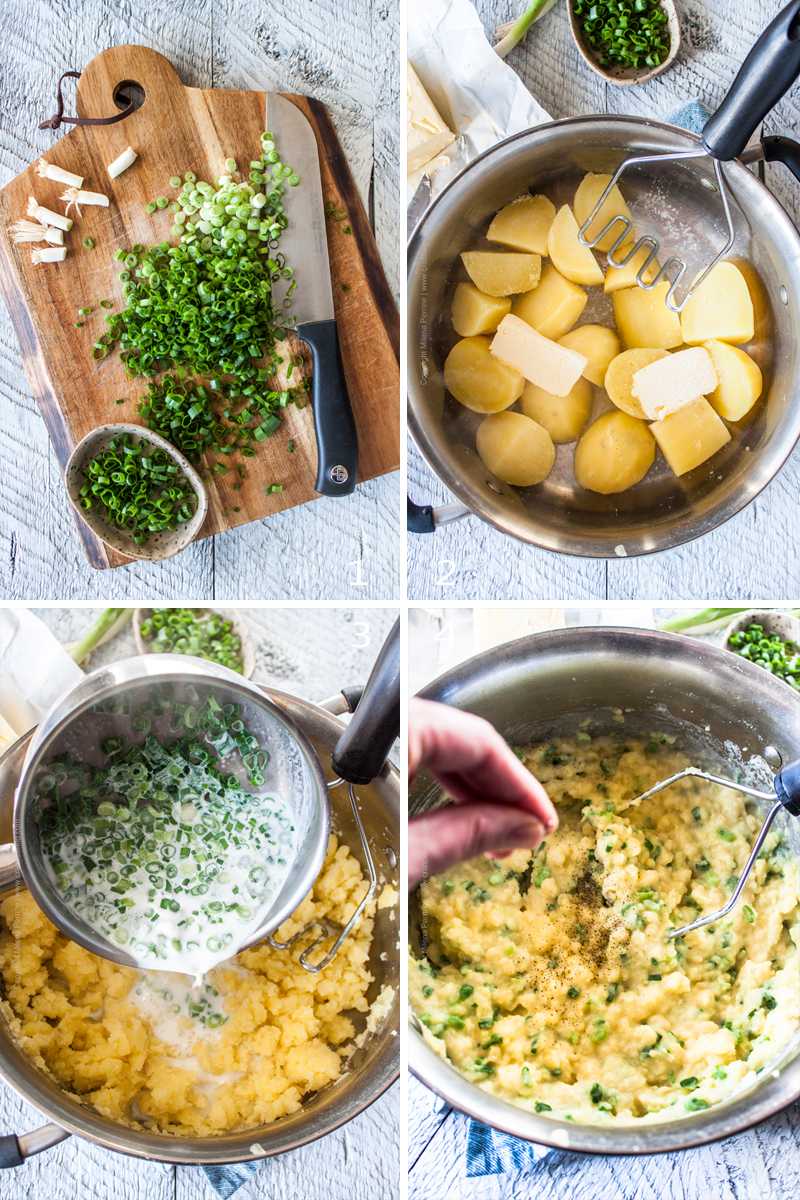 It is easy to whip up a batch of Champ and we make it frequently as a side for baked lamb chops, lamb steaks, seared salmon, chicken cutlets, pork sausages or chops.

All you need to do is:

Possibly the best thing about these zesty mashed potatoes is the melted butter it is traditionally served with – a classic way to enjoy the dish.

To serve Champ in the authentic way, family style, scoop the potatoes into a large bowl or serving dish and make a well in the middle using the back of a spoon. Just before you serve melt half a stick of butter and fill the well it.

An easier approach is to simply place knobs of room temperature butter in the center of individual servings of very hot Champ – it will melt almost instantaneously.

Always garnish with a sprinkle of chopped green onions and season with a pinch of pepper.

TIP: Serve in prewarmed dishware, whether family style or individually. Encourage diners to eat from the outside in, scooping forkfuls of mashed potatoes and dipping them into the butter.

There are numerous twists to Champ, specific to certain parts of Ireland. The difference is in the addition to the mashed potatoes (instead of green onions).

If you made a triple batch and have leftovers reheat them in an oven safe dish covered with foil to prevent the formation of a skin. Place the dish in a 350 F oven. Time will vary depending on the quantity of Champ you are warming up.

Being so rich and creamy Champ can make for a delicious, filling meal in its own right. A bowlful such as you can see above is most filling.

Today, in the majority of cases Champ is served as a side – to that end consider the top three Irish entrée recipes listed below.

1. Peel the potatoes, cut in half or in quarters (aim for uniform pieces) and boil in water until very tender.

2. In the meantime finely chop the green onions (reserve 2 tbsp for garnish) and combine them with the milk in a saucepan. Bring the mixture to gentle boil on the stove, then immediately remove.

3. Drain the potatoes, add the butter and salt** and mash until mostly smooth. Slowly add the hot milk and onion mixture while you continue to mash. Taste and add a bit more salt if needed. Season with pepper to taste.

4. To serve family style first melt about 1/2 stick of butter. Transfer the potatoes to a warmed dish and make a well in the middle with a spoon. Pour the melted butter into the well. (If serving individually add a lump of room temperature butter to the center of each serving).

Garnish with the reserved green onions.

*Unsalted recommended as it will be easier to control the overall saltiness of the dish.

**If using salted butter do not add salt at this point, adjust seasonings in the end.