A smoked chicken brine recipe for flavorful and extra juicy meat. A tried and true timeless recipe used by chefs. Use it to brine a whole chicken or chicken breast, wings, thighs or drumsticks. 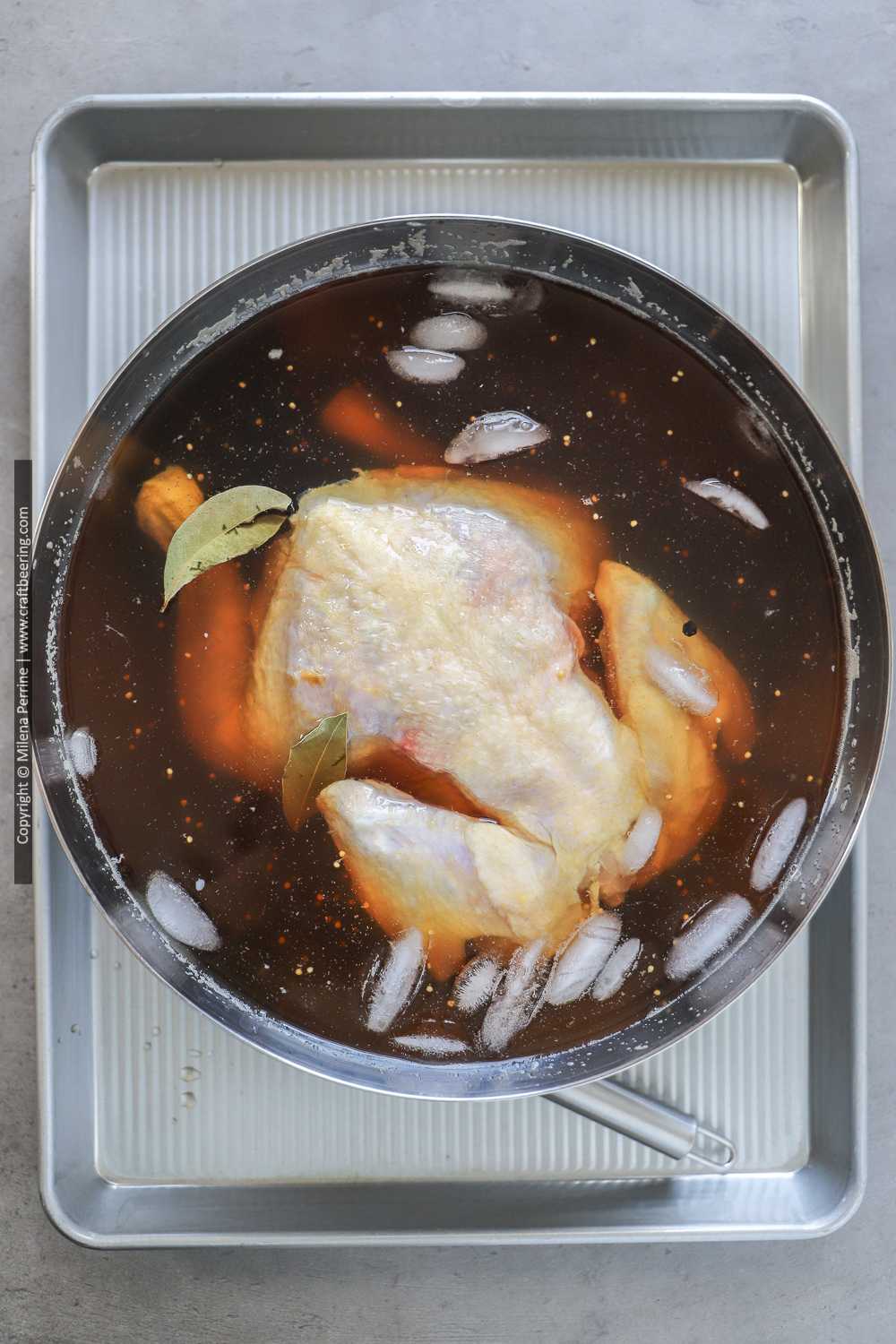 Do You Have to Brine a Chicken Before Smoking It?

Yes, you should always brine chicken meat before you smoke it.

A good brining solution transforms a naturally lean protein such as chicken into a juicy, flavor loaded delicacy. It is a tried and true technique for keeping food moist while it is subjected to the dry heat of the smoker.

What is Chicken Brine Made Of?

In its most basic form a brine consists of just salt and water. A commonly added ingredient is sugar, also a preservative, which balances the saline solution and helps create a fuller flavor.

A number of spices, herbs and flavorful liquids such as beer, stocks, hot or umami sauces can be used in brines as flavor enhancers. 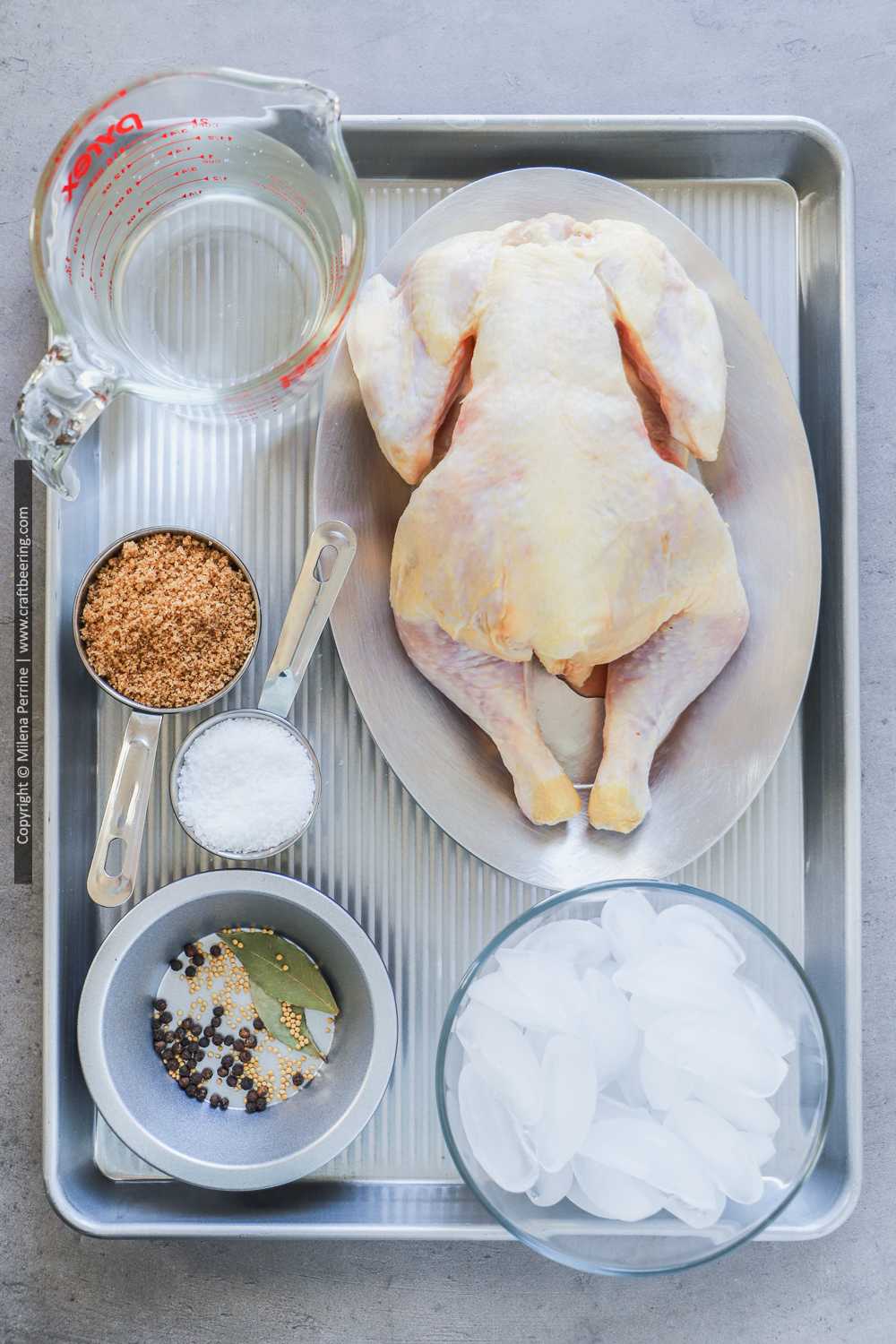 A practical short cut when making brines is to use part of the water needed in the form of ice. This approach significantly shortens the time needed for the solution to cool down.

What is the Ratio for Chicken Brine?

The ratio for chicken brine is the same as that for any other food: 1 part kosher salt : 2 parts sugar : 16 parts water.

This produces a solution with a salt concentration of about six percent which is recommended by food scientists. As a chef Chris has relied on the above ratio throughout his career. His choice of sugar is almost always dark brown sugar for its richer taste.

NOTE: The type of kosher salt used is of importance – some brands are much denser and therefore bring more salinity. For example, Morton is considerably saltier than Diamond Crystal and many store brand names fall in between. To that end you should add a little less than the recommended quantity if using a high sodium variety.

How Does a Chicken Brine Work?

A chicken brine penetrates deep into the meat to alter its structure and increase its water content. When a basic brine is enhanced by the addition of other aromatic ingredients it also infuses the meat with their flavor.

The Nitty-Gritty of Brining

This is what happens when you soak chicken in brine:

The salt, comprised of sodium and chloride, when dissolved in water breaks down into positive charged sodium ions and negative charged chloride ions.

Once the chloride enters the meat’s protein structure through diffusion the negative ions repel each other. This causes the proteins supporting the muscle filaments to shorten and loosen up, creating space gaps which absorb water and retain it.

Simultaneously, as the water enters the gaps, the dissolved sodium ions along with the sugar molecules in the water improve the meat’s flavor.

Step-by-Step How to Brine Chicken

Prepare a concentrated solution. The fastest approach to preparing a brine is to first bring to simmer about a quarter of the total water required along with the salt, sugar, and any other flavorings. This helps the salt and brown sugar dissolve completely.

Water down and allow to cool. As far as the rest of the water needed to satisfy the brine ratio goes, most of it can be in used in the form of ice. Simply mix cold water and ice as shown above and add the hot brine liquid to it. Stir the solution and as soon as it is cool, add your chicken cuts to it to begin the soaking process.

The chicken should be covered completely by the brine, always make sure that you have enough liquid for the amount of meat you want to treat.

Can You Add Pink Curing Salt to Smoked Chicken Brine?

You can if you want to. It really depends on the outcome you are after. If you are looking for a flavor profile similar to smoked turkey legs, then it is a good option. We like this brand of pink curing salt (affiliate link).

Always use it with caution and heed the manufacturer’s direction on how much to add for wet curing.

Should Chicken in Brine Be Refrigerated?

Yes, this is advised. Even though salt inhibits the growth of bacteria brining at a cold temperature is by far safer.

TIP: Always cover the container in which you have the chicken in brine with a fitted lid or plastic. This is to prevent splashing of other foods or surfaces in the refrigerator.

How Long Do You Brine Chicken for Smoking?

It depends on the cut of chicken.

Because a brine works from the outside in, a smaller piece such as a chicken wing or a thigh requires less time than a large whole chicken.

We generally use the following guidelines: 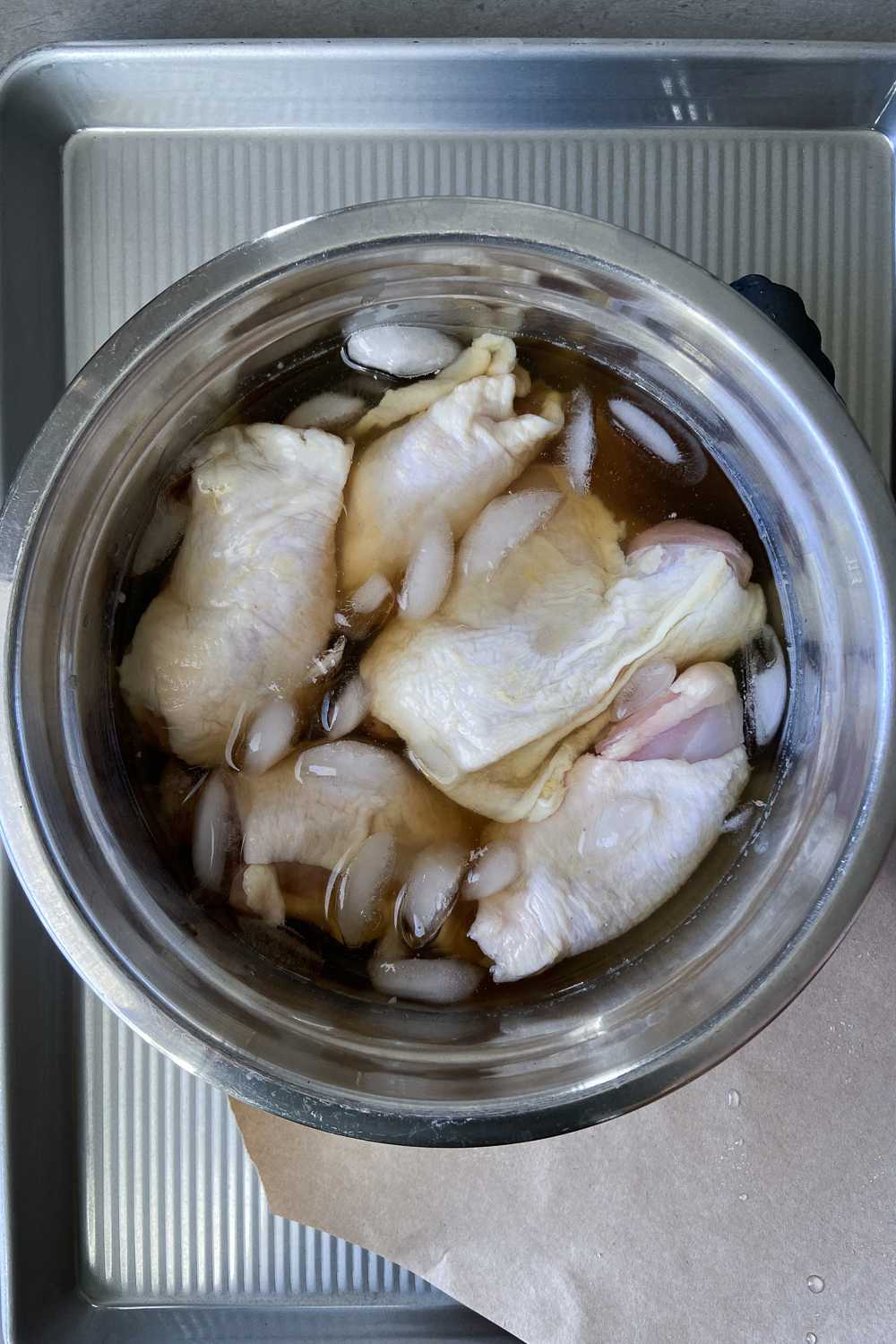 TIP: Putting chicken in brine is suitable for many different preparations, not only smoking. You can use this same smoked chicken brine recipe whenever the cooking method involves dry heat – oven roasting, air frying, grilling. Even the popular beer can chicken method greatly benefits from a brine soak.

Do You Rinse Chicken After Brining?

You do not have to. Simply remove the meat from the solution and pat it dry with a paper towel. Discard the brine.

Why Does The Chicken Meat Not Finish Dry?

While chicken soaks in a brine it can absorb up to 10-15 percent of the water from the solution. Due to the mechanics of the process the moisture remains trapped within the protein network of the meat.

Once smoking begins the dry heat gradually drives out the water contents of the meat. Because there is an excess of moisture due to the soak, the overall loss is significantly less and you can expect a juicy bird. 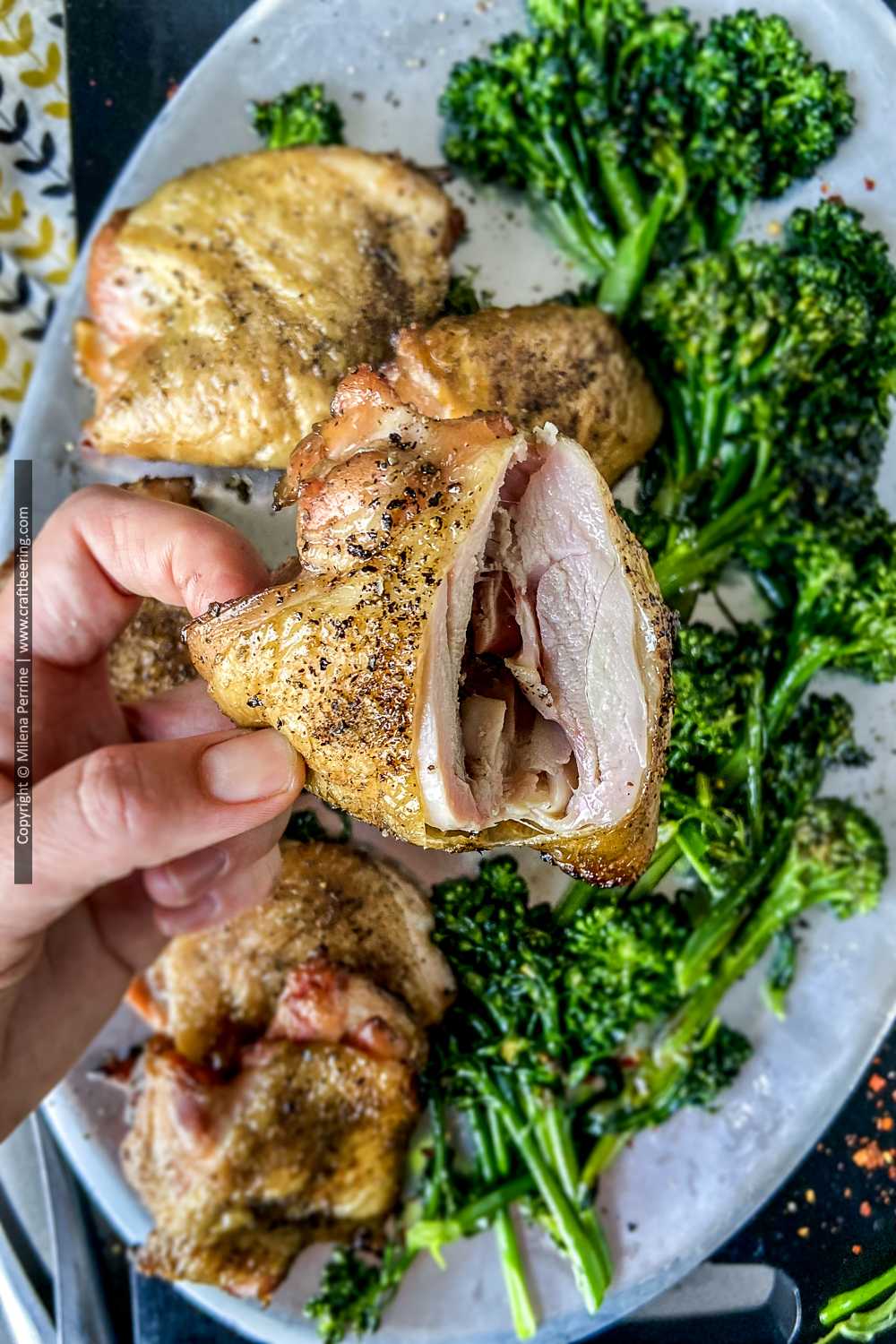 Always brine chicken thighs before you smoke them so that the dark meat finishes as juicy as possible.

Be on the conservative side when seasoning brined meat, be it poultry or other. Because it has already absorbed sodium ions form the solution it is satisfactorily flavored and only a minimal amount of salt or none at all is needed to flavor the outside before it goes in the smoker.

In an appropriately sized container combine 2 cups cold water and 6 cups ice cubes. Pour the concentrated brine solution and stir to combine. Allow the mixture to cool down.

Add the chicken to the cool brine and make sure it is submerged in the liquid. Cover and refrigerate. Brine as necessary (see notes below).

Before smoking remove the chicken from the brine and pat it dry. Discard the brine.

When seasoning the outside of the meat keep in mind that you need to use very little or no salt because the chicken has already absorbed sodium from the brine (this depends on the length of the brining time).

TIP: If you already brined chicken for the necessary hours but changed plans last minute and are not going to smoke it right away then remove the meat from the brine and pat it dry. Return it to the refrigerator until you need to cook it. Cook it within 24 hours.

This batch of brine is sufficient for a whole bird of about 4 pounds. Double the recipe for more protein.

*If using a brand such as Morton, reduce to 6 tbsp. Morton is very dense and contains more sodium per the same volume which will result in a stronger saline solution. Ideally use Diamond Crystal brand or a store brand such as Kroger.

You may disregard this data as the brine is not consumed.