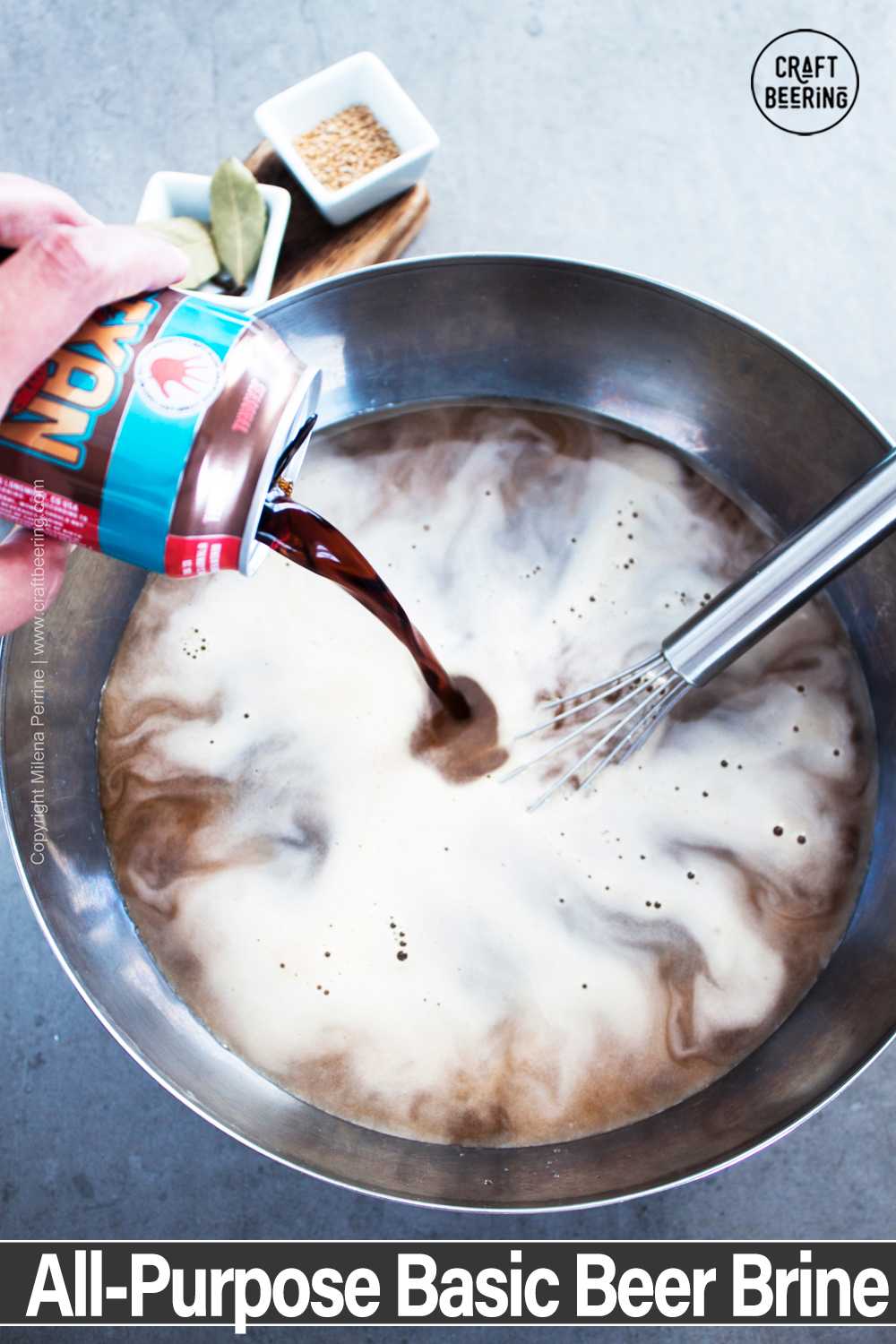 What Does a Beer Brine Do?

A beer brine both moistens and seasons the protein soaked in it.

Whereas typically you can brine a meat for moisture and then marinate it for flavor, a beer brine will season the food deep inside. No need for a marinade. All you have to do is use a dry rub (easy on the salt) or other seasoning plus a good brushing of olive or neutral cooking oil. 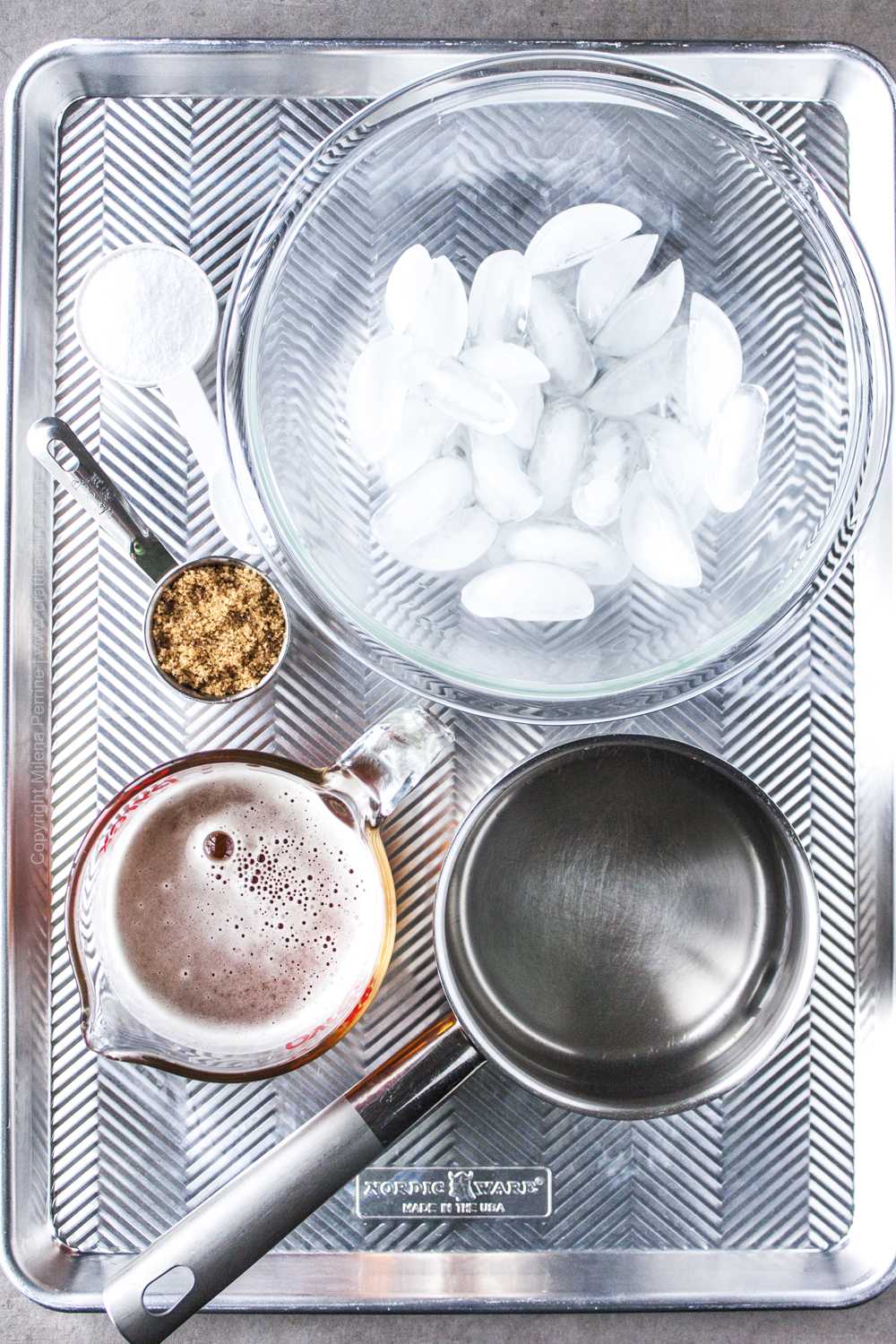 At its core a beer brine is a flavored brine, which simply means that in addition to salt, sugar and water, the classic brine ingredients, it includes a flavorful brew and frequently other ingredients.

Our base formula for all purpose beer brine is:

The basic recipe as given in the card below yields enough for a whole chicken or an average pork roast and can be easily scaled up or down as needed. Be sure that the food is entirely submerged in the brine.

How Does A Beer Brine Work?

In a nut shell a beer brine works through diffusion, just like any other brine does. At the molecular level the dissolved salt, sugar and water move into the food and alter its protein structure, ultimately causing it to absorb more water and all the flavors of the brine.

The salinity of brine solutions cause the typically tight protein strands of the meat to loosen and trap water molecules. You can easily observe that the meat becomes plumper in result of the uptake of water – especially with smaller cuts such as pork chops. When the dry heat of cooking causes the meat to loose most of the extra liquid, there is still plenty of moisture (as well as flavor) left to ensure a juicy chicken breast, pork tenderloin, halibut fillet, etc.

The maltier and yeastier the beer, the more flavor will be infused deep inside your protein of choice. Our favorite styles to work with are:

How to Make All-purpose Beer Brine 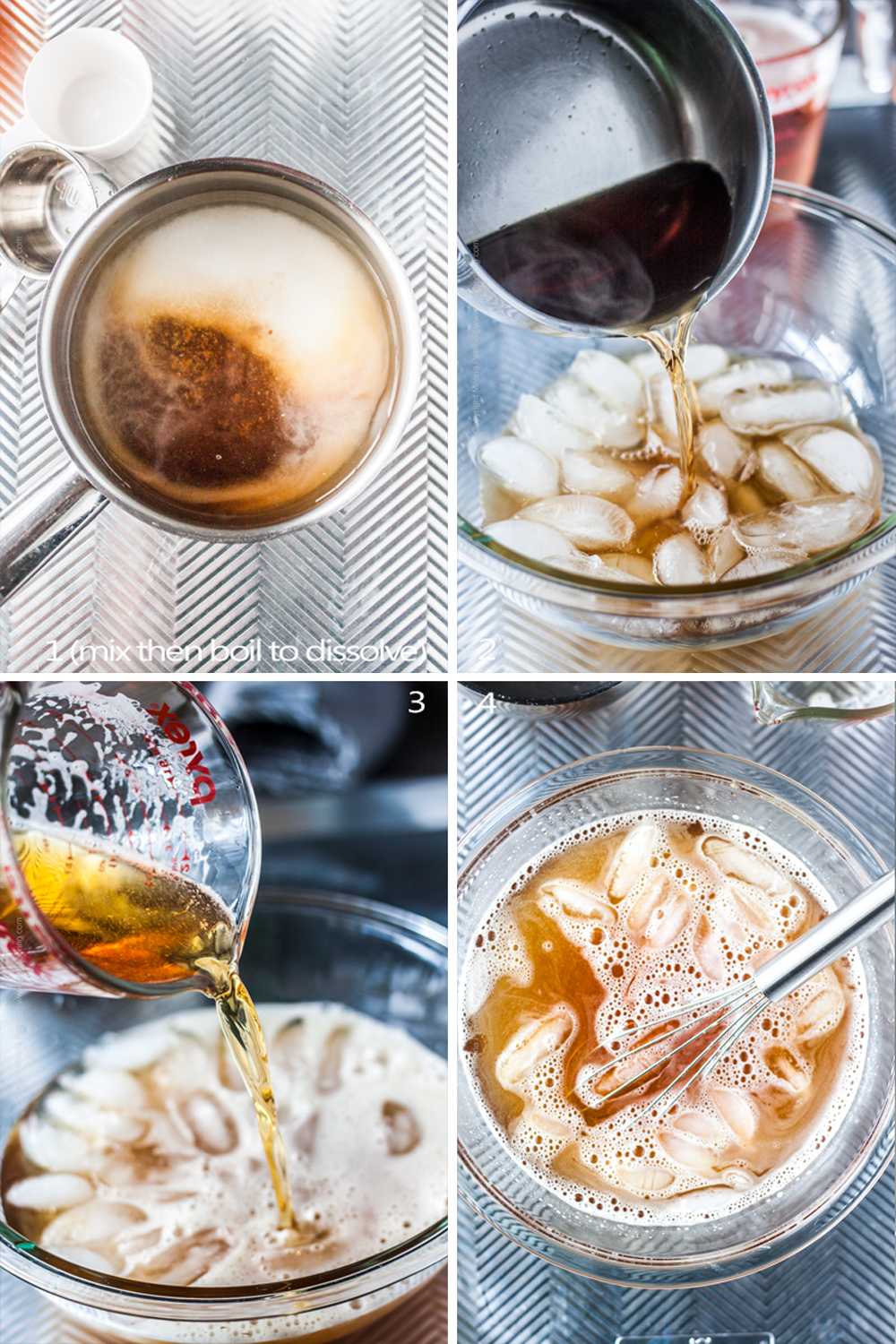 This is the fastest way to make beer brine: 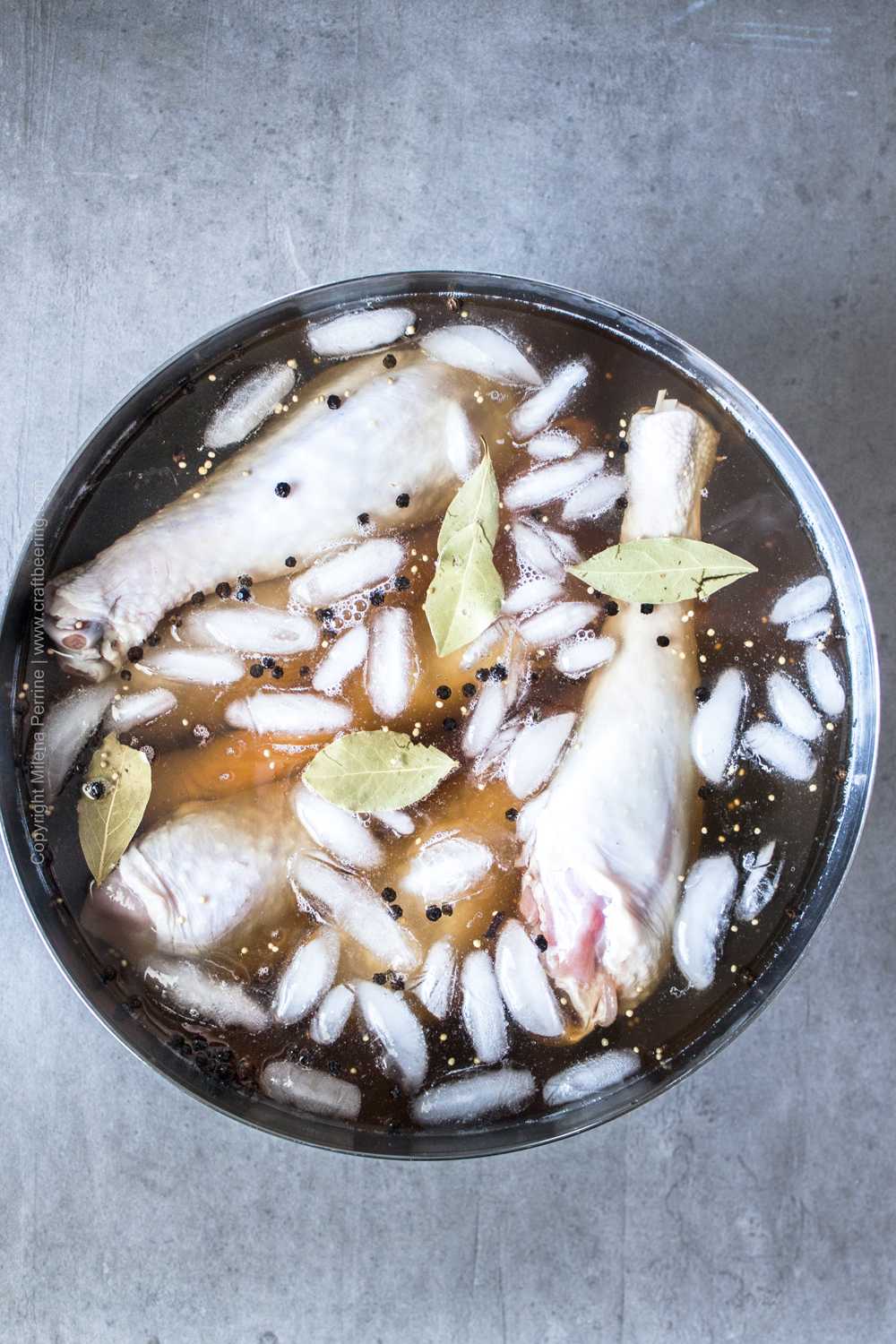 Our many years of experience show that brines deliver the most flavorful turkeys, not just the juiciest one. Always, always brine turkey meat.

Tips for Beer Brine for Chicken 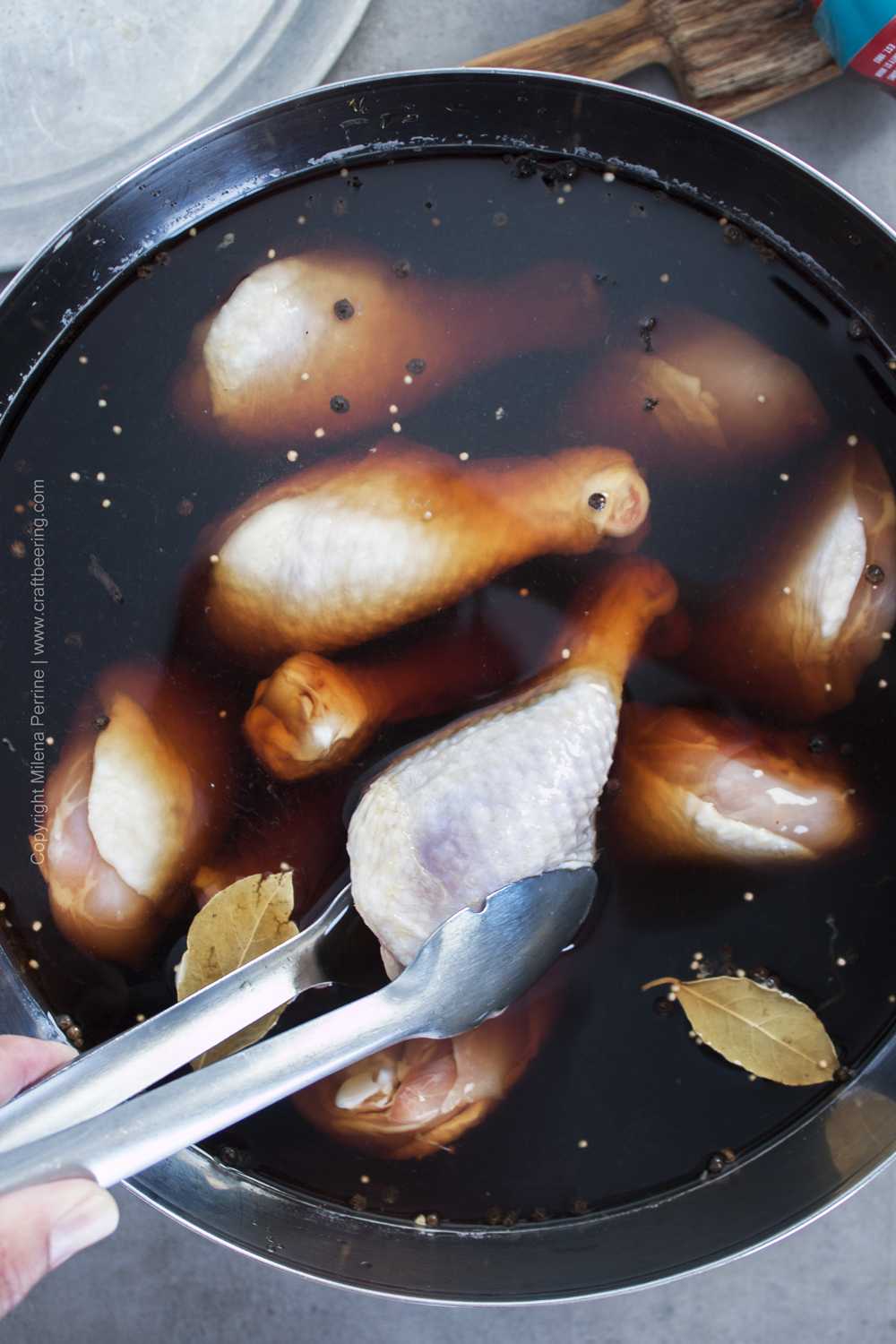 Always brine whole chickens, drumsticks and chicken breast, especially if your plan is to bake or grill.

Tips for Beer Brine for Pork 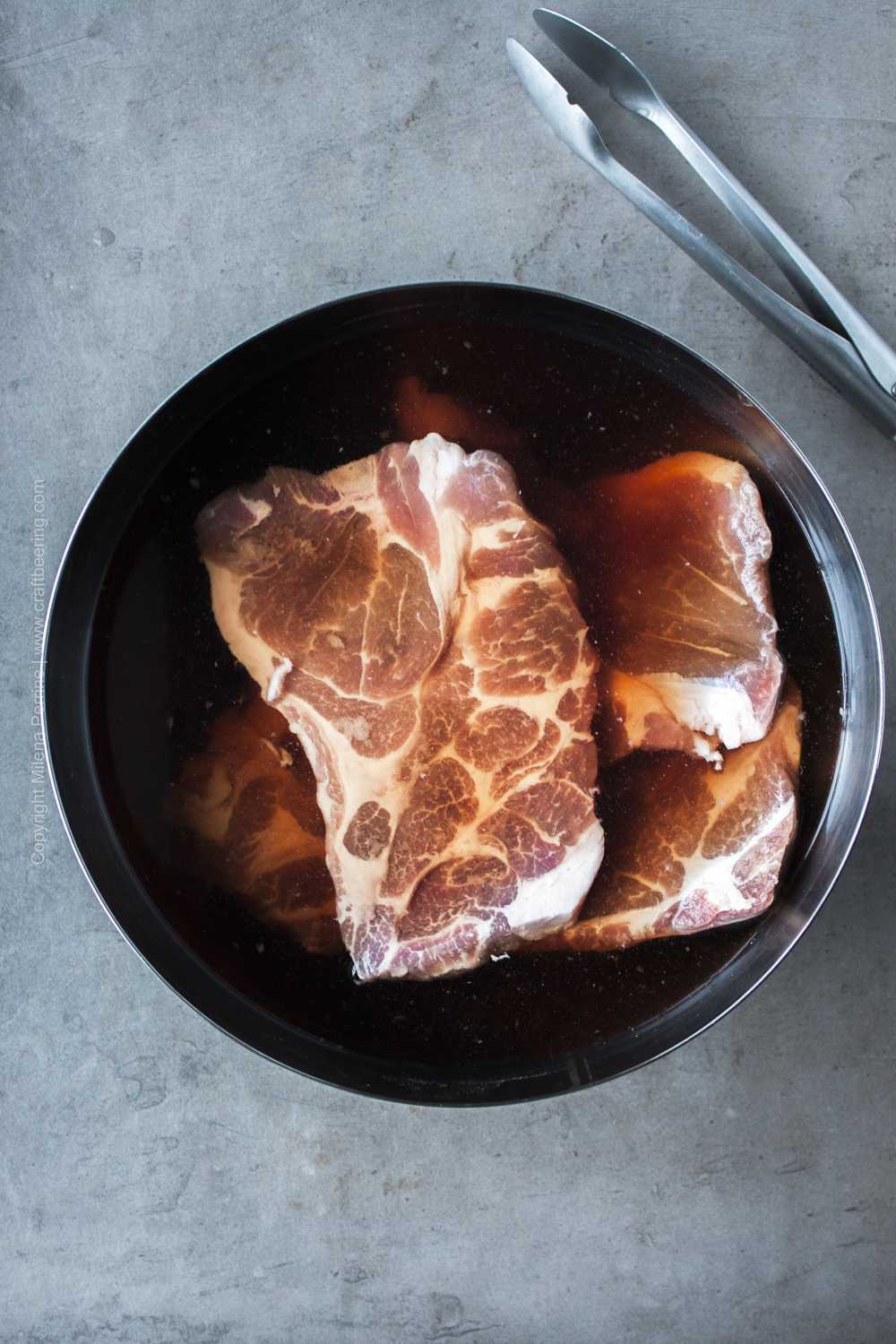 You should always brine lean pork cuts such as tenderloin and loin, but even fattier cuts of pork such as the pork steaks above can benefit from spending an hour or two in a brine.

Tough beef cuts like brisket or eye of round benefit from a beer brine before smoking or roasting. You can also make a beer brine for corned beef brisket. In certain instances you can brine steak. Besides that, beef is generally better suited for marinades and dry rubs (also known as dry brine) than brining, beer brines included.

The main reason to not brine beef is that its flavorful juices ‘bleed out’ and combine with the rest of the brine.

Smaller and more delicate proteins require less time submerged in a brine and this is most true with fish and shellfish like shrimp.

Basic method: Bring 1 cup of water to a boil, add the salt and sugar and stir to dissolve. Add the solution to the cold water to temper the temperature and let it cool down completely. Add the cold beer and any additional ingredients you are using. Submerge the food, cover with lid or plastic and refrigerate. Brine per the schedule below.

Alternative method: Pour 1 cup of boiling water over the salt and sugar, whisk to dissolve and add 1 1/2 cups of ice cubes plus the cold beer. Add any flavoring ingredients. Mix to combine, then add the food. Cover with lid or plastic and refrigerate. Brine per the schedule below.

Brining Schedule***: Brine for 30 minutes to 24 hours, depending on the weight of the food and its size (ex. 4 pounds of pork chops need less time than a 4 pound pork loin).

The formula for all purpose beer brine is:

Use the ratios to scale up or down as necessary.

*If using Morton salt stick with the specified quantity. If using Diamond, increase by about 30 percent to get the same salinity.

**You can divide this into 1 cup of water and 1 1/2 cups ice cubes (for the faster method to make the beer brine).

***Do not over brine, especially smaller foods like shrimp - they can quickly become too salty and even dry out.

Nutritional information is not provided as most of the brining solution is not consumed and simply facilitates juicier and more flavorful proteins.