How to make Zwiebelkuchen –  the famous German onion pie. This recipe is from the Bavarian region of Swabia. 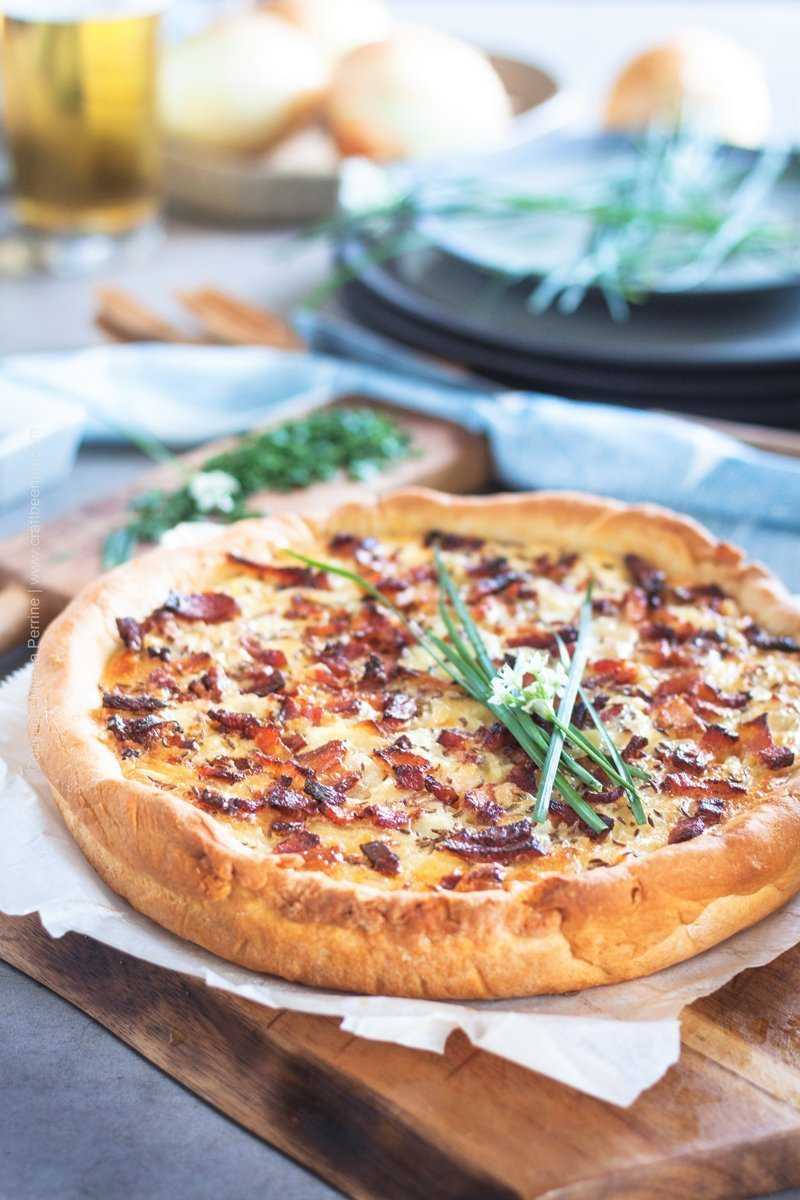 Zwiebelkuchen is a savory German onion pie. It is prepared with a crust filled with a mixture of eggs, cream, cooked onions and frequently bacon. Essentially a hybrid between a deep dish pizza and a quiche. Flavor wise it is remarkably similar to Flammkuchen.

In direct translation from German the meaning of the specialty is onion cake (Zwiebel=onion and Kuchen=cake).

The traditional shape is round but modern versions include sheet style rectangular onion pies.

In Germany onion pie is enjoyed year round, but it reaches the peak of its popularity during the fall harvest each year. It is the main gastronomic focus of the wine festivals of Germany’s wine regions (Baden, Rhine, Palatinate, Franconia, etc) as well as the Weimer onion market. It is also a popular offering during Oktoberfest and on beer garden menus in Bavaria.

Zwiebelkuchen has many regional variations. They involve both the ingredients used and the method of preparation.

For example in Southern Germany the crust is typically thinner than in other areas because the onions and bacon are added pre-cooked to the filling. In Saxony, the opposite is true.

In some areas people use a more pie like crust made with cold butter, in others a yeasty dough. 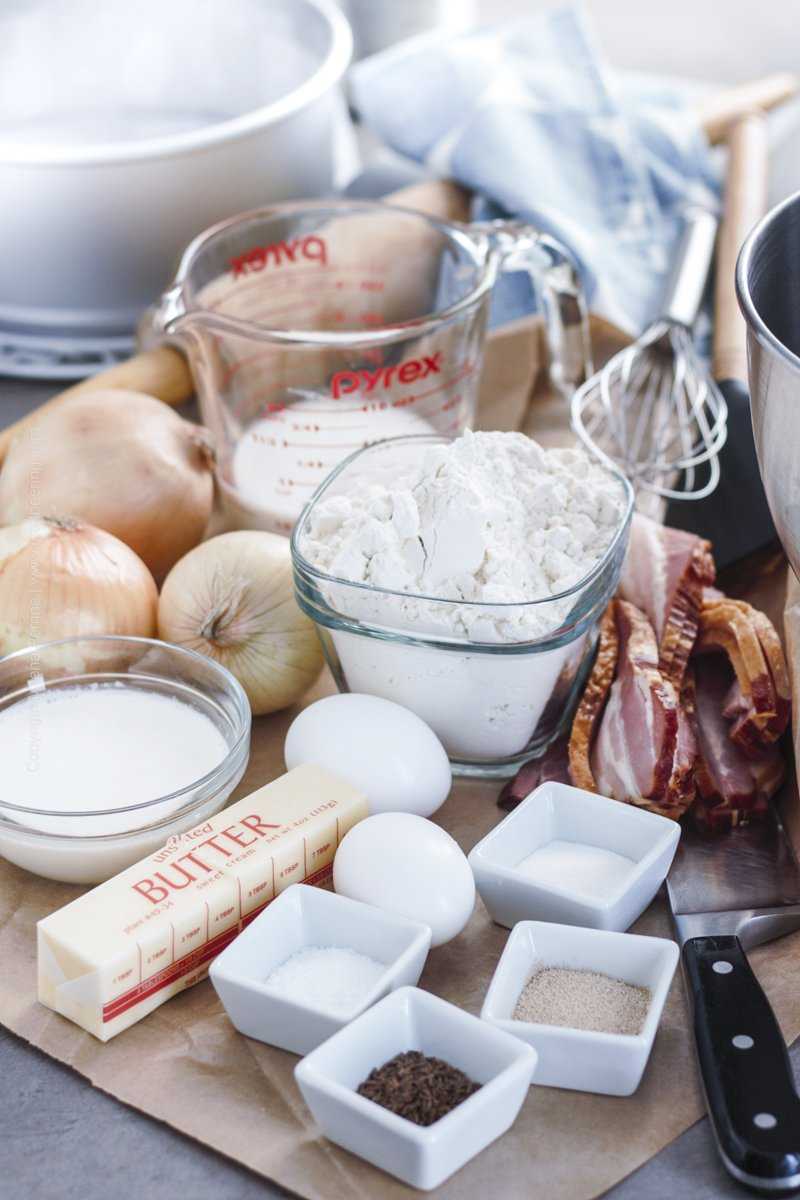 How to Make German Onion Pie

Step 1. Make the dough for the crust.

Step 2. Prep the Bacon and Onions for the Filling 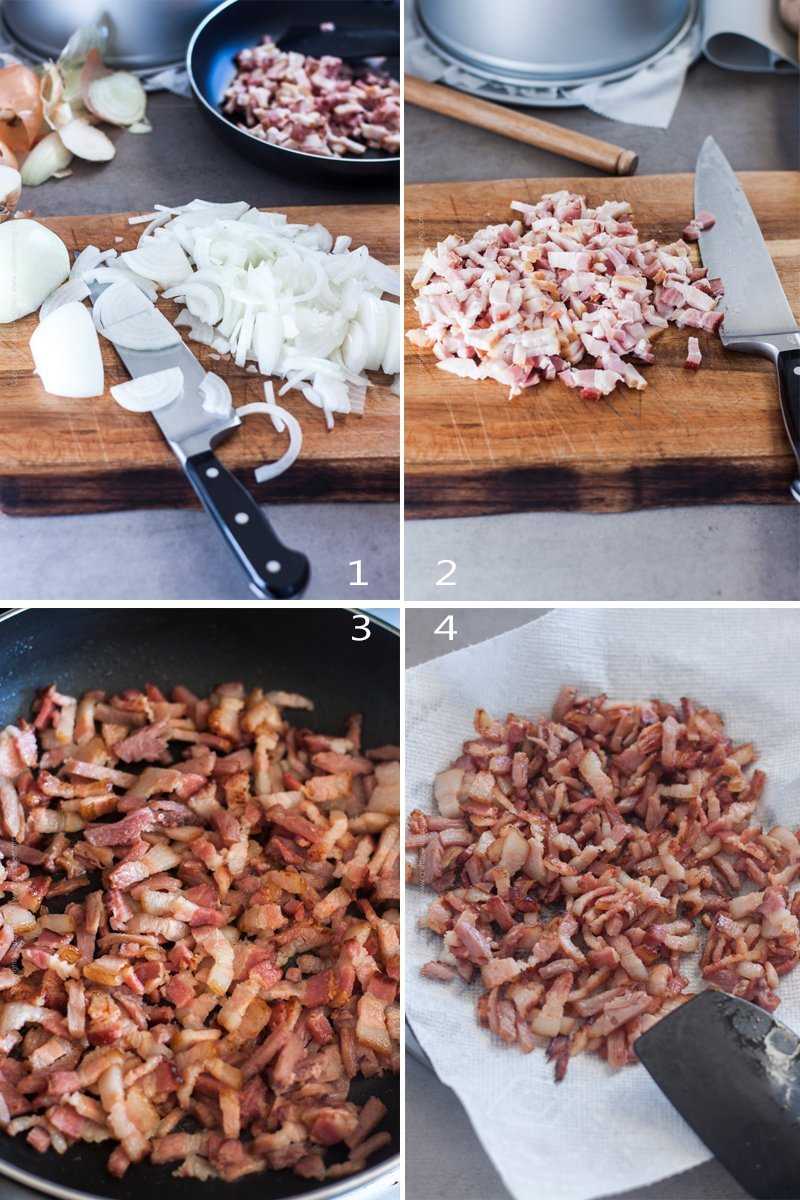 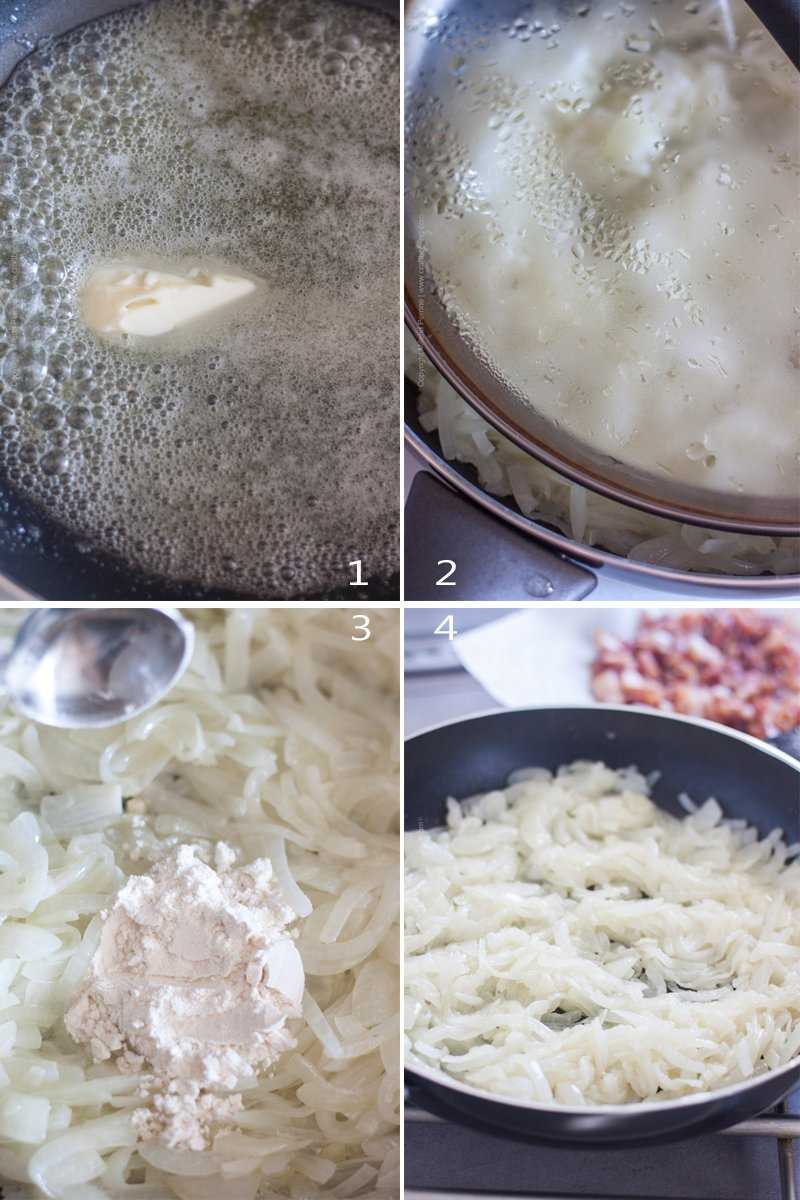 TIPS: (1)You don’t have to use parchment paper to line the baking dish of your choice, but using it certainly makes things much easier and is common practice in Germany. (2) The height of the crust will depend on the baking dish. The smaller it is the higher up the crust will reach along the sides. 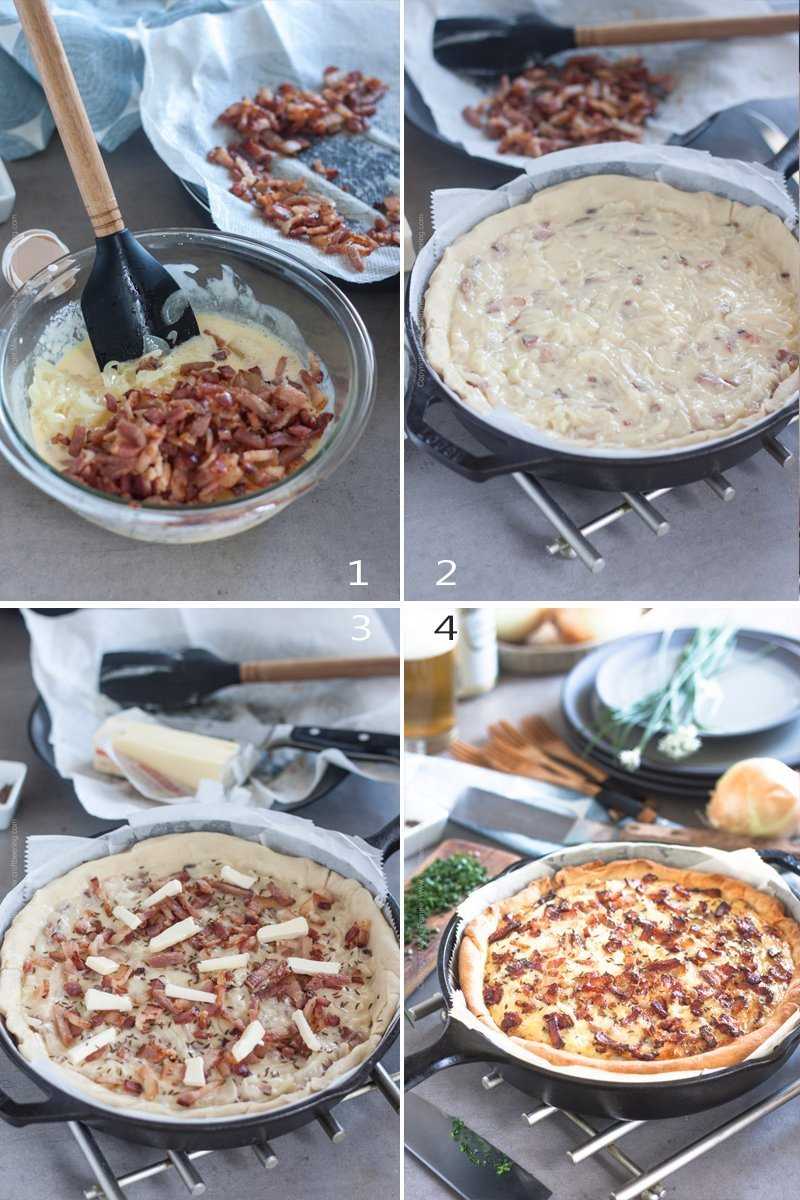 Zwiebelkuchen is best served warm. A slice can be presented very casually as finger food or served plated, sometimes accompanied by sour cream and a fresh herb garnish.

During the autumn wine festivals the most popular beverage pairing is a white new wine known as Federweisser. Riesling is also a favored option. Various German lagers such as Pils, Helles, Marzen, and Dunkel are another well-loved alternative. 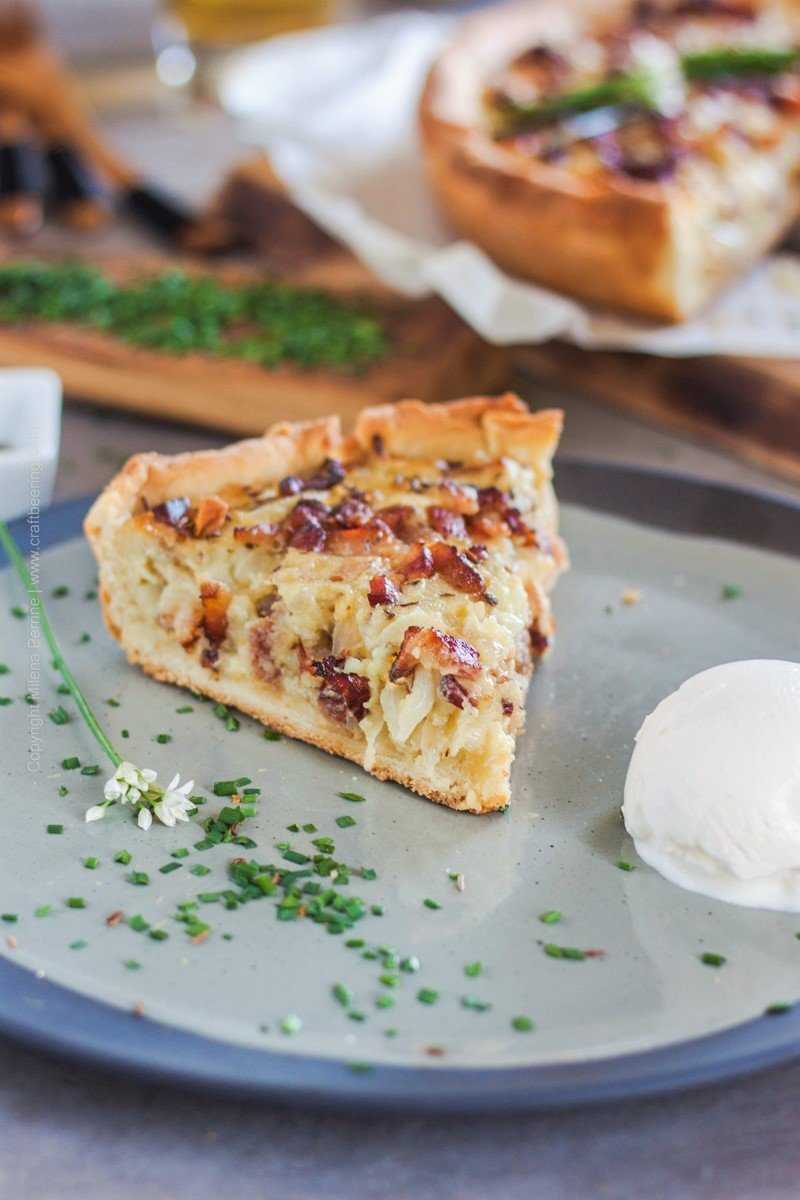 We adapted this recipe from Chefkoch.de

1. In the bowl of a stand up mixer combine the yeast with the sugar and about half of the milk. Stir and let activate in a warm place. Anywhere from 5 to 20 mins, as necessary.

2. Attach the dough hook to mixer, add flour, salt and the rest of the milk to the activated yeast. Knead on low for a minute, then stop and add the butter. Knead again until a soft dough ball forms. Cover with plastic wrap and let rise in a warm spot, until doubled in size.

3. On a clean, lightly floured surface roll the dough into a round or rectangular shape sized to fit your baking dish. (Use a 9-10 inches diameter round dish or 9x9 square or about 9x10 rectangular dish).

1. In a pan over medium heat cook the diced bacon until it renders most of its fat. Remove to paper towel lined plate and let it cool down. Discard excess rendered fat from the pan, leave a coating or so.

2. Peel and thinly slice the onions. In the same pan melt 2 tbsp butter, add the onions and cook until soft. Partially cover the pan with a lid to help them sweat. Once soft, add 1 tbsp flour, mix and cook for 1 more minute. Remove from heat and let cool down.

Assemble the filling only after you have rolled out the dough and are ready to place it inside the baking dish.

4. In a bowl whisk eggs and cream, season with salt (liberally). Add nutmeg if using. Fold in the cooked onions and most of the bacon (reserve about 1 tbsp).

5. Line your baking dish with parchment paper, place the rolled dough and adjust it around the edges (how high the sides will go depends on the size of the dish) and add the filling. Sprinkle with caraway seeds, the reserved bacon and add a few flakes of butter.

6. Bake for 35 to 45 minutes, until the filling is nicely set and fully cooked and the crust golden brown. Allow the onion pie to cool down a tad bit, slice and serve warm.

*Alternatively use store-bought pizza dough or pie crust. Make sure you have enough to cover a 9 to 10 inch round dish or 9x9 or 9x10 square or rectangular dish (with plenty to fold up the sides of either one).

**If you skip it for a vegetarian version (popular in many areas of Germany) you do not have to increase the amount of onion. Simply omit the bacon.

***Different brands of salt have different densities and therefore will bring different degrees of saltiness to offset the sweetness of the heavy cream.