Traditional Flammkuchen, also known as Tarte Flambée, is a thin crust topped with creme fraiche, thinly sliced onions and smoked bacon and baked in a wood-fired oven. This Flammkuchen recipe is calibrated to help you bake a delicious traditionally topped flatbread at home. 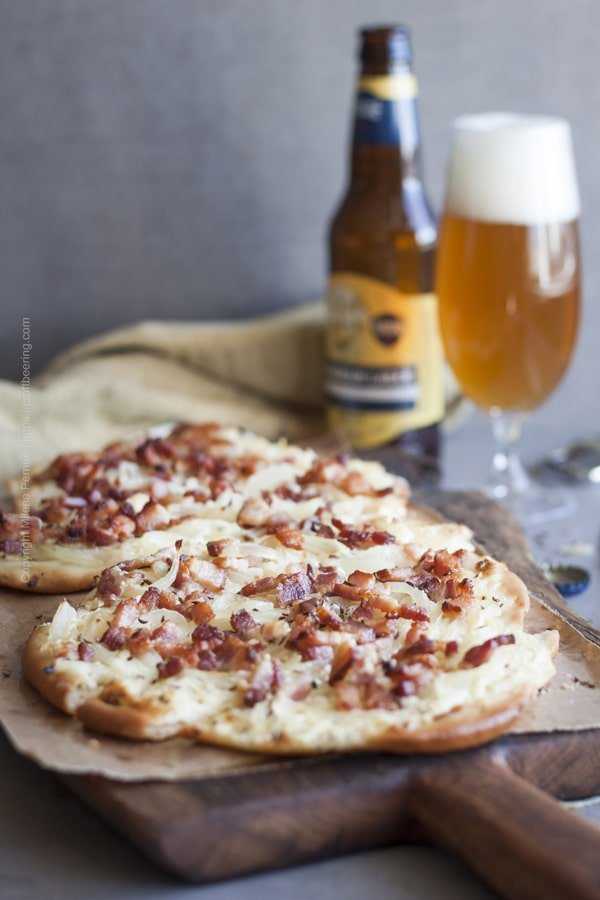 Many regard the Flammkuchen or Tarte Flambée as a German pizza. It is a dish of the Alsace region of France and the adjacent Rheinland and Baden-Württemberg regions of Germany.

It originated as just a layer of bread dough, rolled out very thin and baked for a minute or two in the intense heat of a wood-fired oven.

Tarte Flambée translates to a ‘tart/pie baked in flames’ from French. Its German name, Flammkuchen (sometimes Flammekueche), translates to precisely the same – flamme=flame and kuchen=tart.

The two names are used interchangeably given the history, shared traditions and frequently bilingual population of the area. 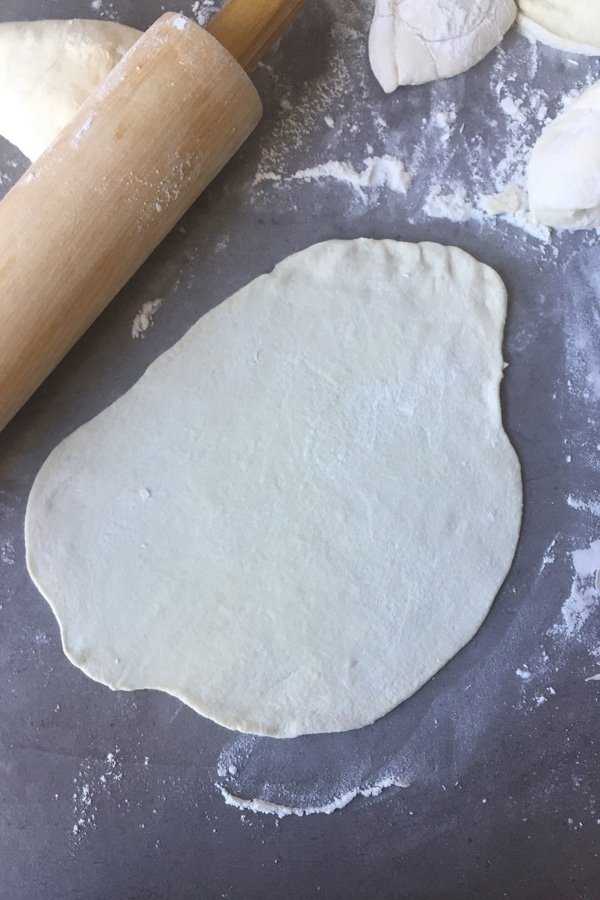 Make the Dough – Yeast or No Yeast?

As can be expected when a traditional regional dish is concerned there are many, many recipes for the Tarte Flambée dough as well as variations of the toppings.

Traditionally half rye flour and half wheat flour were used and no yeast was added. At the time bread dough was mixed and proofed in large, bacteria rich dough wooden bowls. The micro flora inhabiting the wood fermented the dough.

Many original recipes for Tarte Flambée and Flammkuchen do not call for yeast or call for home brewed beer (with live yeast).

Nowadays however, the dough is frequently leavened with yeast – both in commercial establishments and in home conditions.

Another reason in support of adding yeast is the baking temperature for Flammkuchen. Unless it is baked fast by the intense heat of a wood-fired oven it can dry out excessively over prolonged time in a regular oven and fail to form its landmark crisp-chewy crust.

We recommend that you use a little bit of yeast and proof the dough. 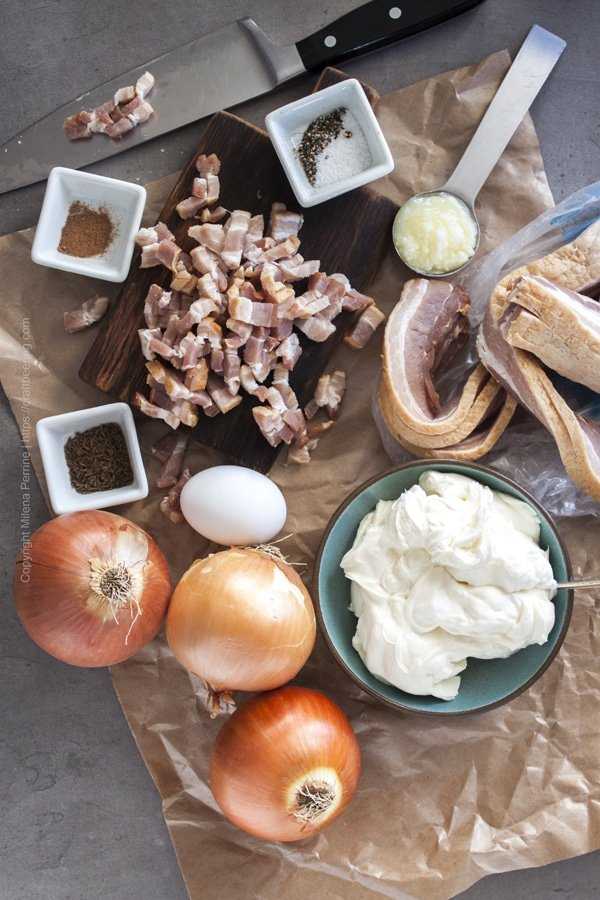 Often times an egg yolk is added to the creme fraiche and in Alsace fromage blanc (white (to mean ‘fresh’ cheese).The bacon is sometimes pre-cooked in clarified butter. Caraway seeds are typically sprinkled over the Flammkuchen in Germany. 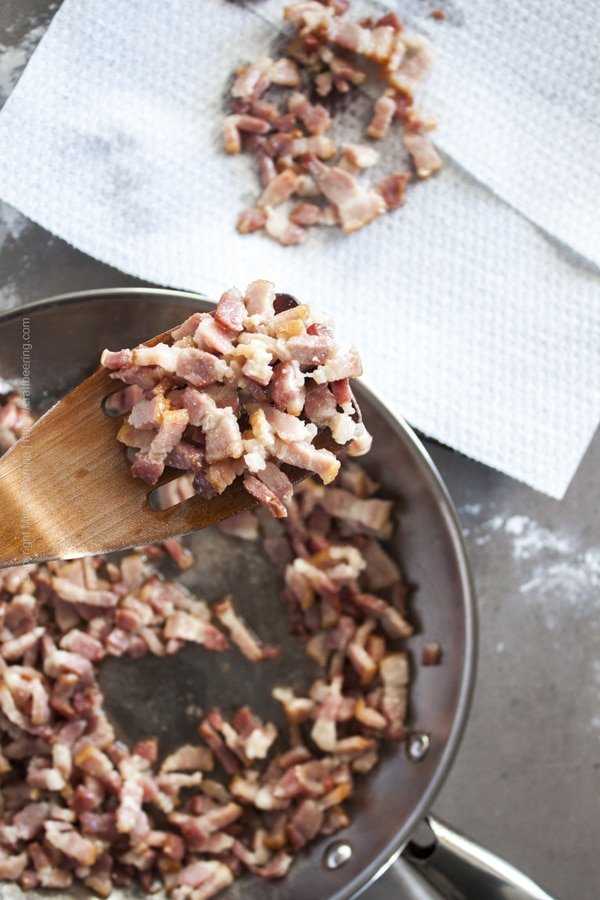 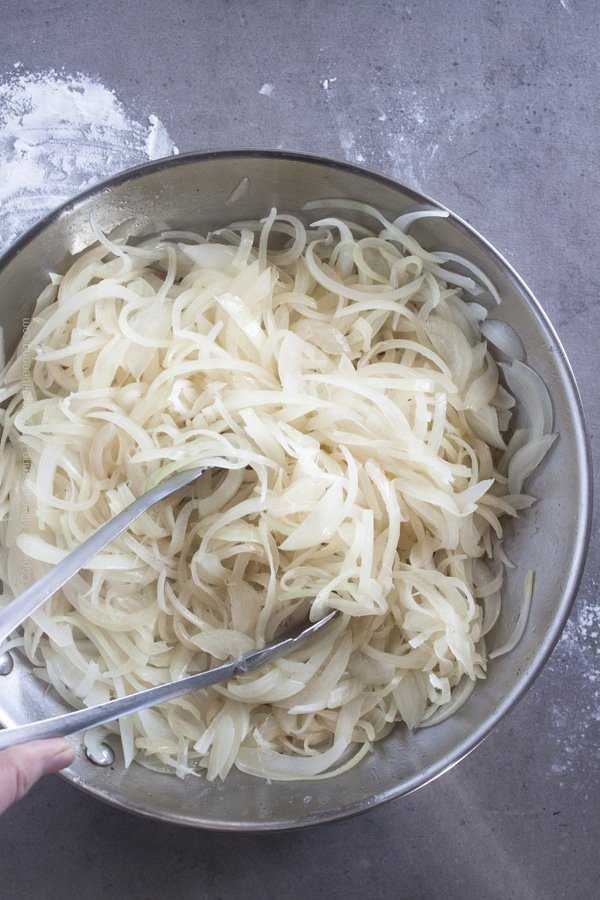 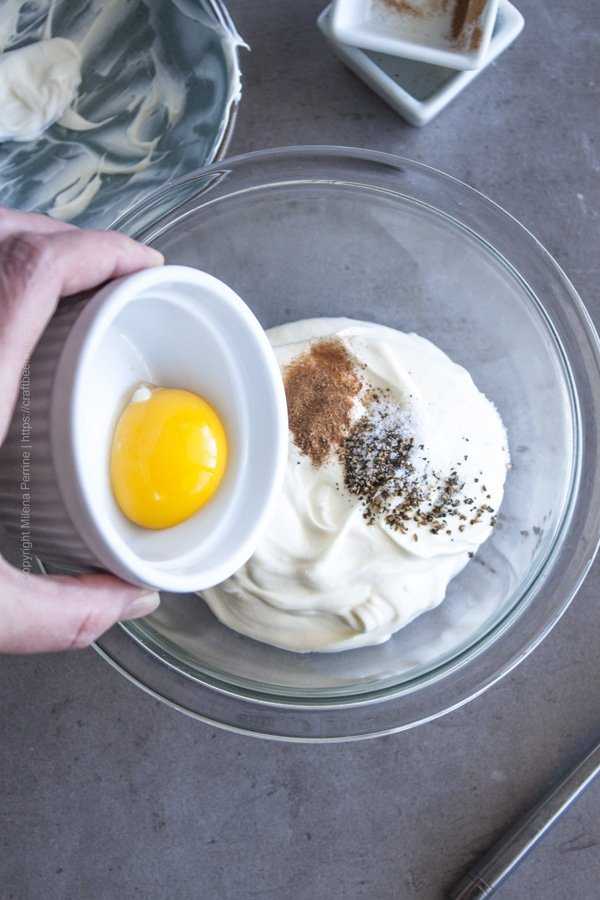 TIP: If you want to make your own creme fraiche place two cups of heavy cream in a container, add four tablespoons of buttermilk to it, stir, cover and let sit in a warm place overnight. Refrigerate the next day. You can use it in a variety of creme fraiche pizza recipes.

Tarte Flambée Shape – Round or Square?

If you visit the regions where Flammkuchen is traditional you will see it presented both round and square. When we lived in Schwarzwald and traveled around the vicinity we noticed that on the same restaurant dotted pedestrian street in Freiburg or Strasbourg you can be served either version, depending on where you happen to sit down.

Smaller, free-form-shaped Flammkuchen are quite common on German beer garden menus and we rather favor those. Great snack food to enjoy with German lagers. 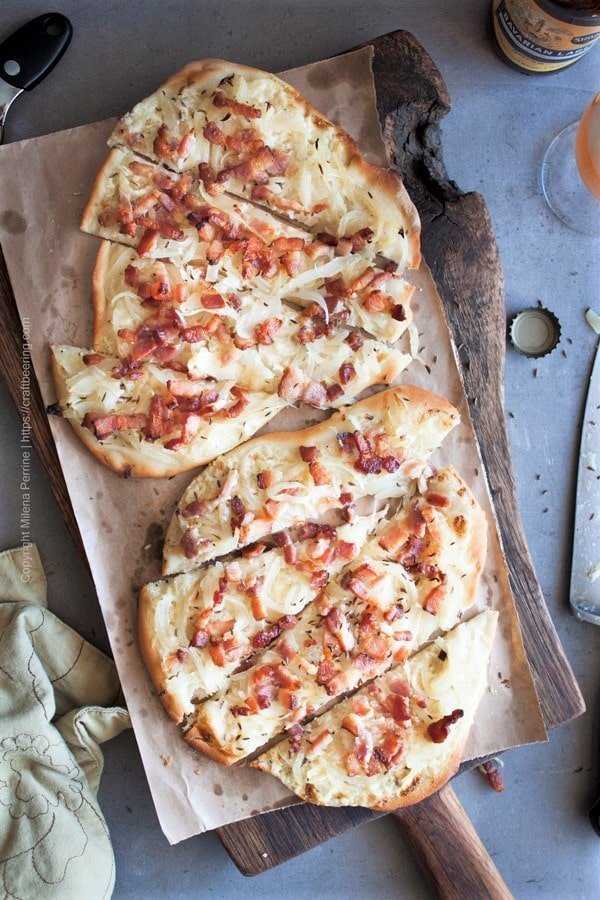 The cream topping of Tarte Flambée should be ivory in color. 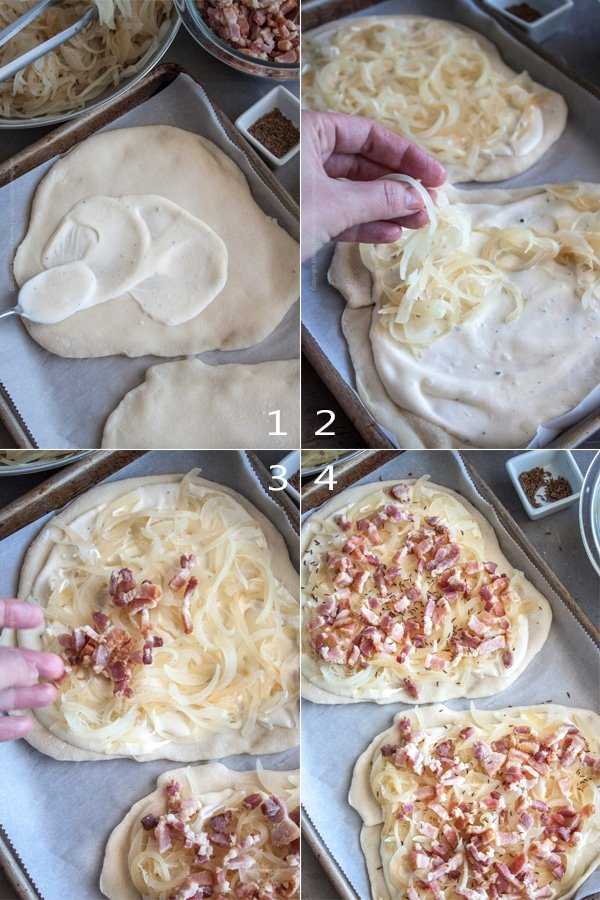 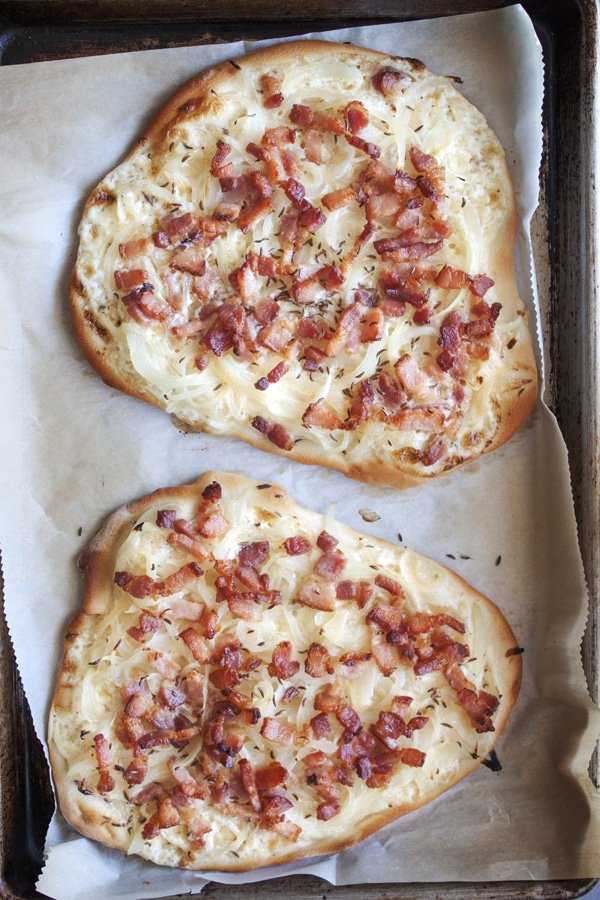 A long standing tradition is to take a slice of the flammkuchen, roll it onto itself and bite into it. Try it out – it is most satisfying!

Being a flatbread at its core today Tarte Flambée is prepared with a variety of toppings beyond the traditional combination. There are even dessert options.

Try these ideas (always include the creme fraiche): 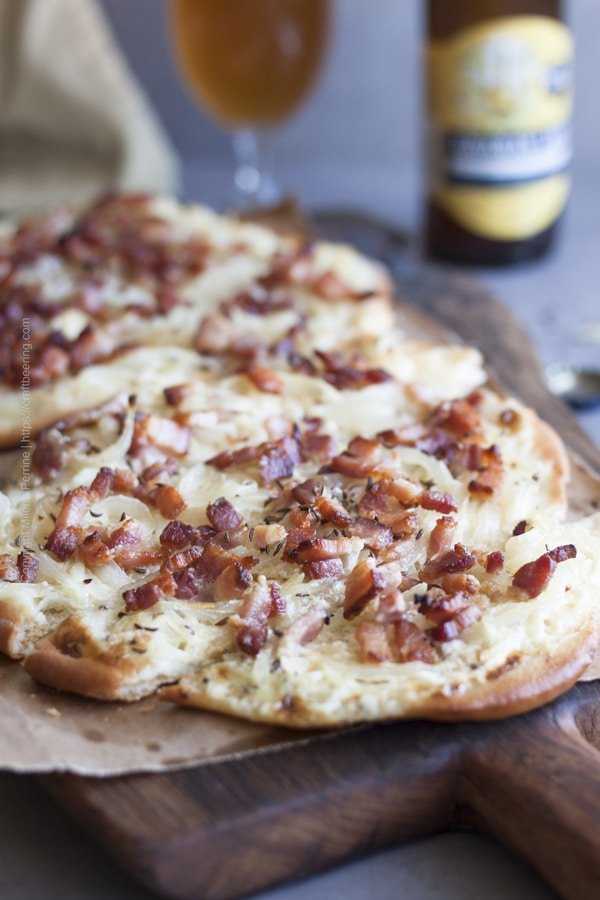 Alsace, today in France, is a rich region with a complicated, turbulent history. In the past there were numerous periods when it was ruled by the predecessors of contemporary Germany. In result German is still spoken there today, as well as several other dialects influenced by both French and German.

Alsace shares a lot of cultural, including culinary traditions with today’s Rheinland and Baden-Württemberg (previously Baden, Palatinate) regions of Germany.

Back in the day bread was baked once or twice a week in large, wood-fired communal ovens.

To test if the temperature is high enough for bread baking, a thinly rolled flatbread would be inserted in the center of the oven, the embers pushed to the side. The intense heat would bake it in matter of a couple of minutes.

The crust on the periphery of the flatbread would frequently get burned by the flames, hence the names – Tarte Flambée/Flammkuchen. Subsequently people started adding toppings to the thin test breads and creme fraiche, onions and lardons became popular in Alsace.

This recipe yields 4 large individual tarts or 8 smaller appetizer-sized ones. We like making the smaller ones because they seem to bake more evenly in a home oven.

One serving is 2 small or 1 large tart.

If you are short on time feel free to use store bought pizza dough. Bring it to room temperature and roll it out thin as per the recipe.

*If you'd rather not use yeast, also omit the sugar. Combine the sifted flour, salt and 3 tbsp oil (instead of 1) together and slowly add the warm water (most likely will only need 3/4 cup). Mix by hand or use a mixer. Move to floured surface, knead until the dough is elastic and let it rest covered for about an hour.

**Be prepared to add more flour, as needed if dough turns out a bit wet. This is likely if you are located in Europe.

Tarte flambee is traditionally eaten by hand. People commonly roll up large slices and eat them end to end.