German potato pancakes are delicious discs of pan-fried grated potatoes – golden and crispy on the outside with a fluffy potato middle. 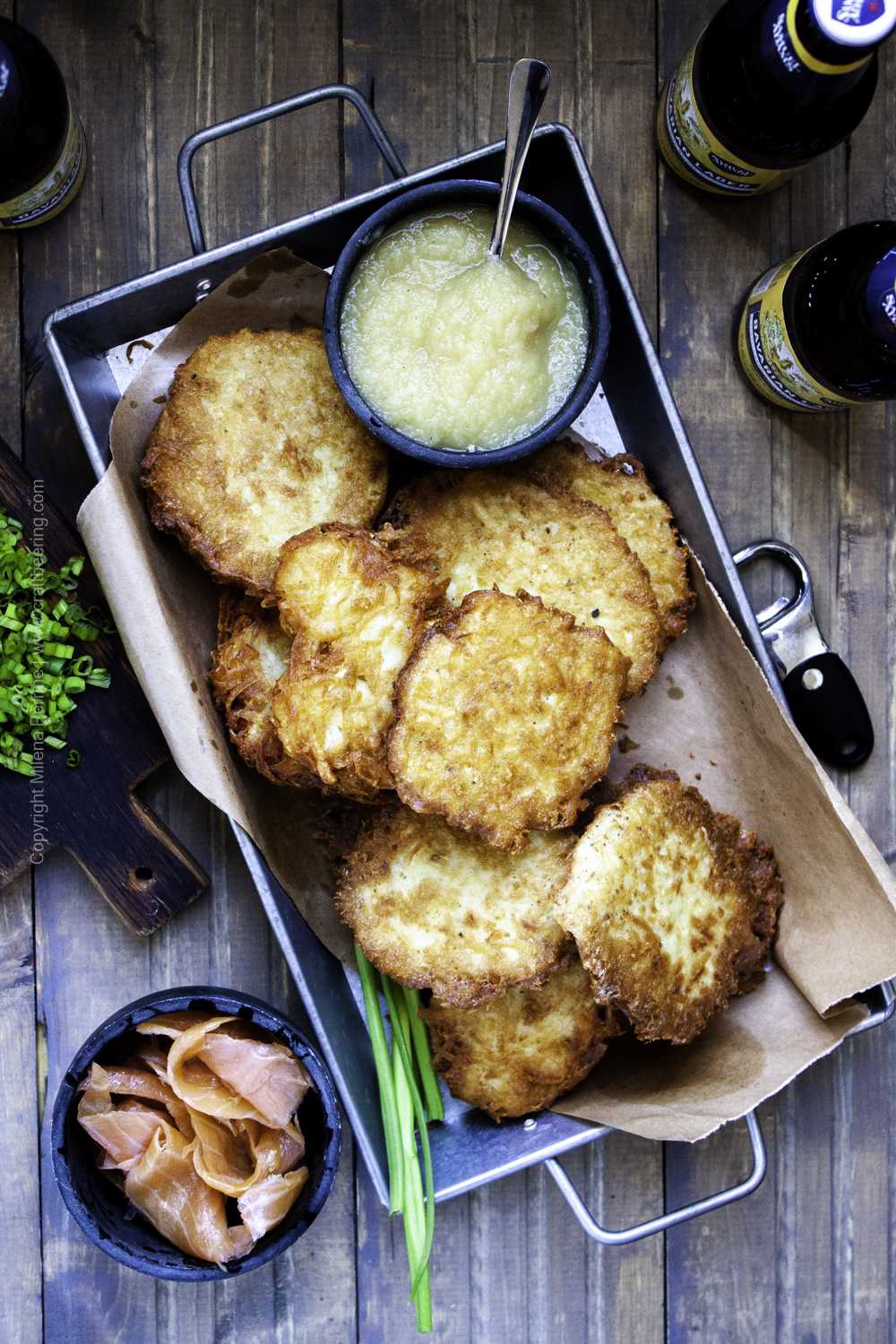 A German appetizer popular on beer garden menus and at folk festivals such as Oktoberfest, they are also sold as a quick snack at Christmas markets alongside roasted nuts and Gluehwein.

The most common name for German potato pancakes is Kartoffelpuffer although in different parts of the country they are known by other names. In Bavaria for example they are Reiberdatschi.

Kartoffelpuffer are similar to latkes or Irish boxty but do not use matzo meal like the former or flour, buttermilk and soda like the latter. There is no potato boiling involved either. 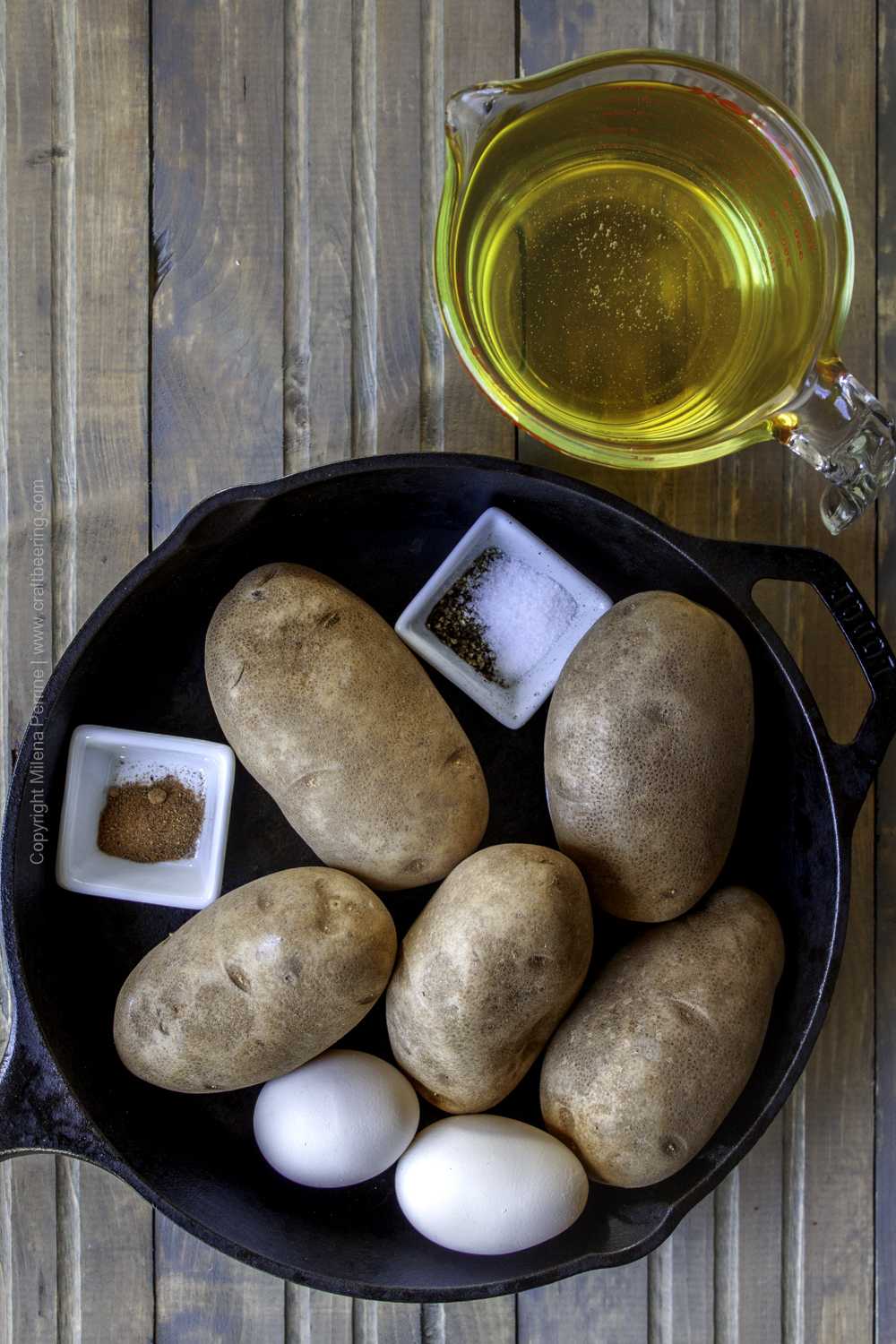 All you need to make German potato pancakes are starchy potatoes (such as Russet in the US), eggs, salt and pepper, nutmeg and vegetable oil for frying. Optional corn or potato starch. A heavy bottomed pan such as a cast iron skillet is very convenient for frying them.

I learned how to make Kartoffelpuffer from my landlady in Freiburg when I studied there. On Sunday afternoons she frequently made a batch of them and we had a beer or two while I told her about my week and she kindly corrected my German.

When she made Kartoffelpuffer she didn’t add a thickening agent but instead used the potatoes’ own starch – the traditional approach. On occasion she determined that she only needed the yolk of the eggs in order not to make the potato mixture too runny.

After making the crispy treats myself over the years I find that it is easier to just add a tablespoon of potato or other starch (corn, arrowhead root etc). But if you’d like to make authentic Kartoffelpuffer – use the starch from the potatoes (see prep steps below).

OPTIONAL: You can also grate a couple of garlic cloves and/or half an onion and mix it in with the potatoes – this is commonly done. In this case I recommend that you only use egg yolks due to the extra moisture from the onion. 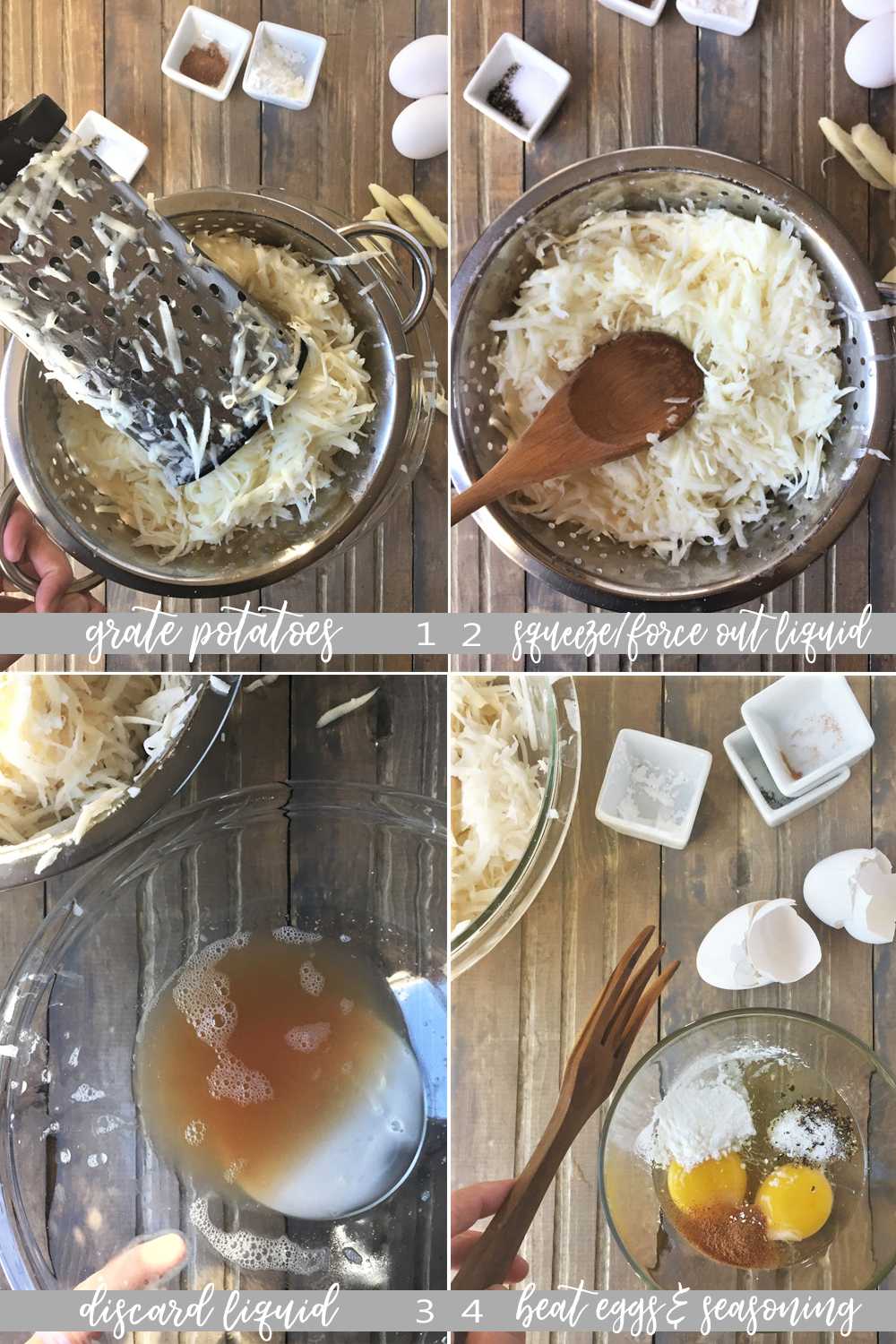 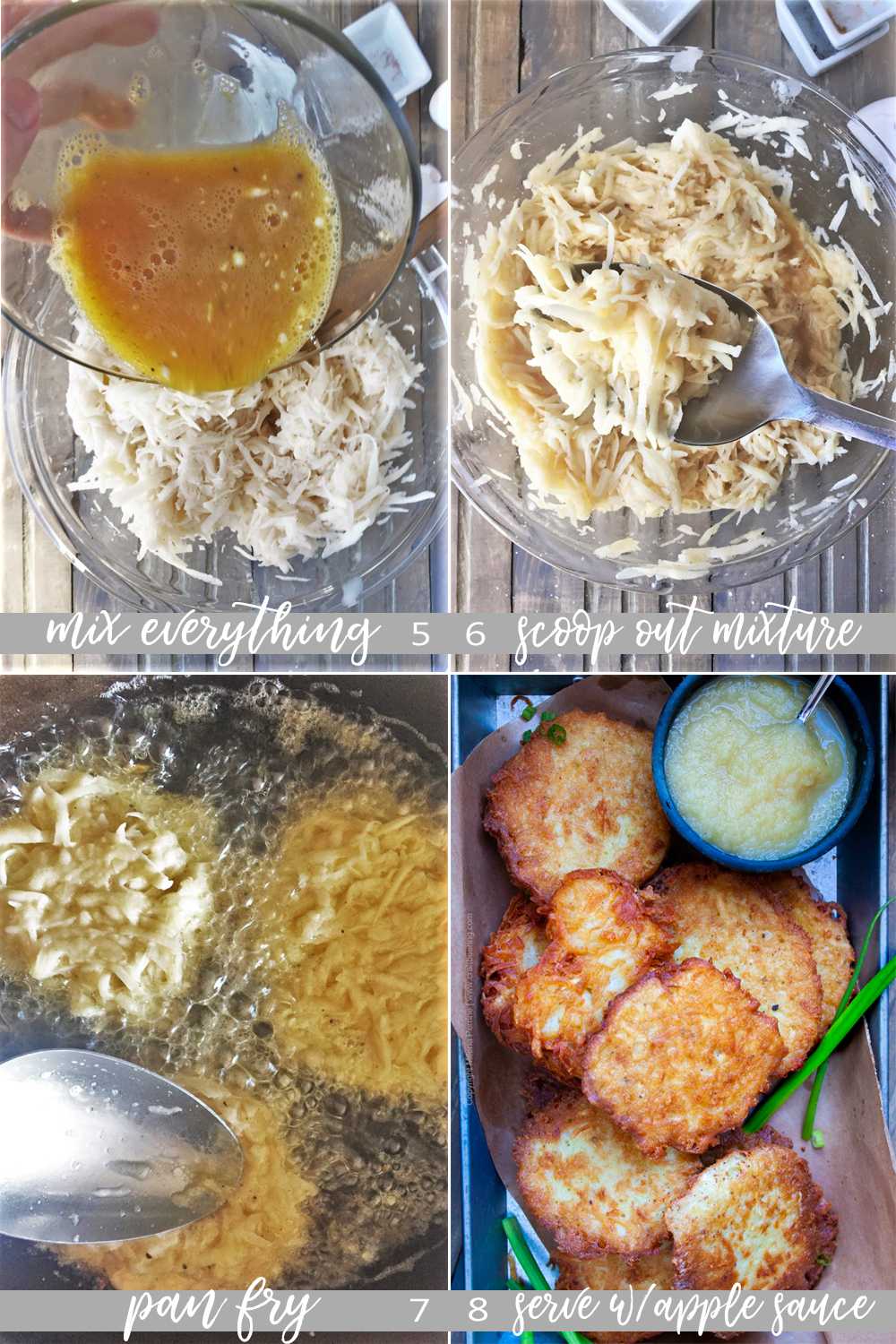 TIP: If you want to use the actual potato starch instead of adding starch it is very helpful to grate a few of the potatoes very finely and the rest coarsely as shown.

SHORTCUT: For really easy potato pancakes it is absolutely possible to use store-bought frozen hash-brown potatoes. Simply bring them to room temperature (you may need to drain them as well) and follow the rest of the recipe.

These potatoe fritters are such a versatile item – delicious on their own as a snack/appetizer but also great as a side to roasts and brats.In beer gardens they are traditionally served with apple sauce. In Bavaria sauerkraut is commonly added to them. 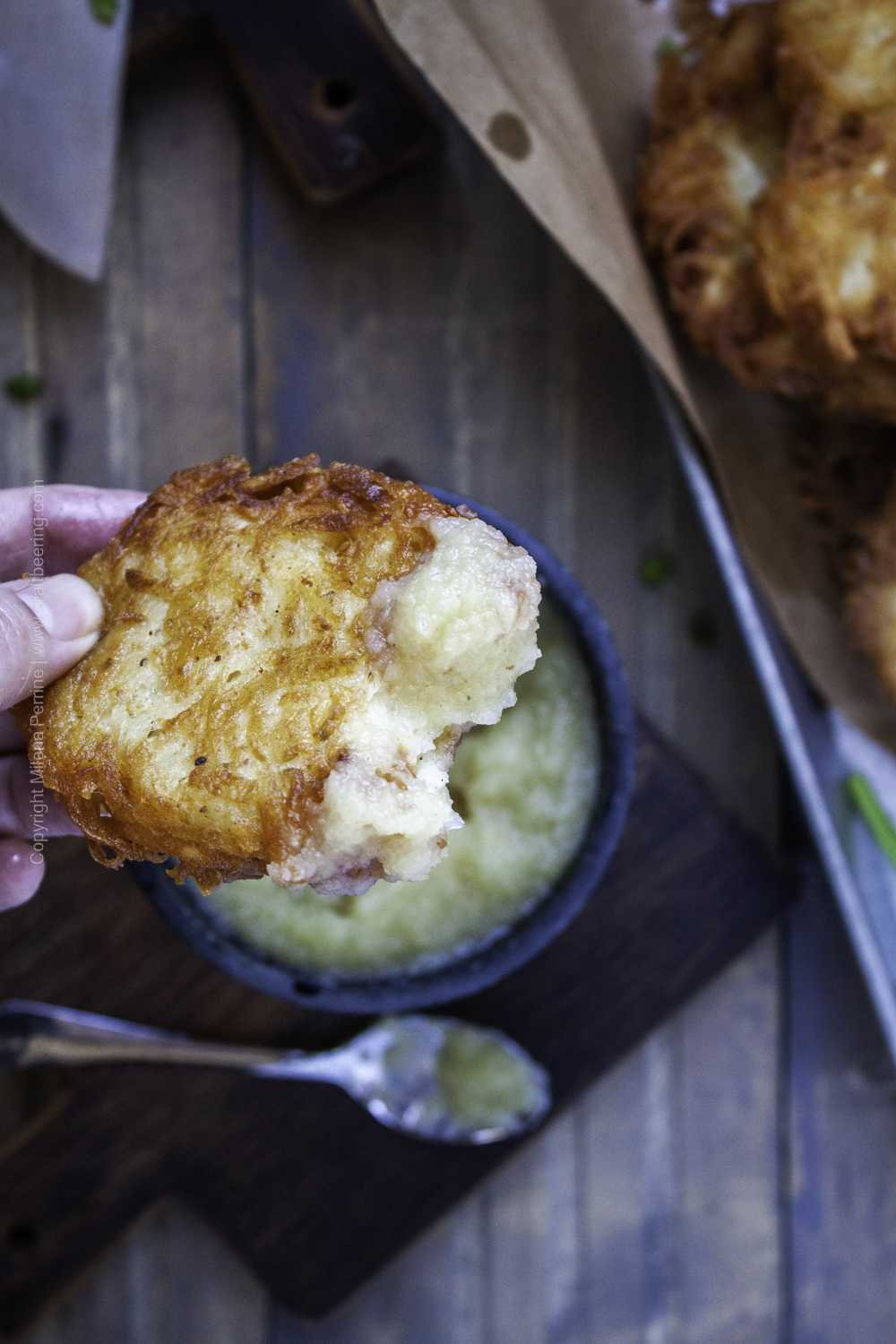 My favorite way to enjoy them is with lax and green onions. If you like sour cream – add a dollop. 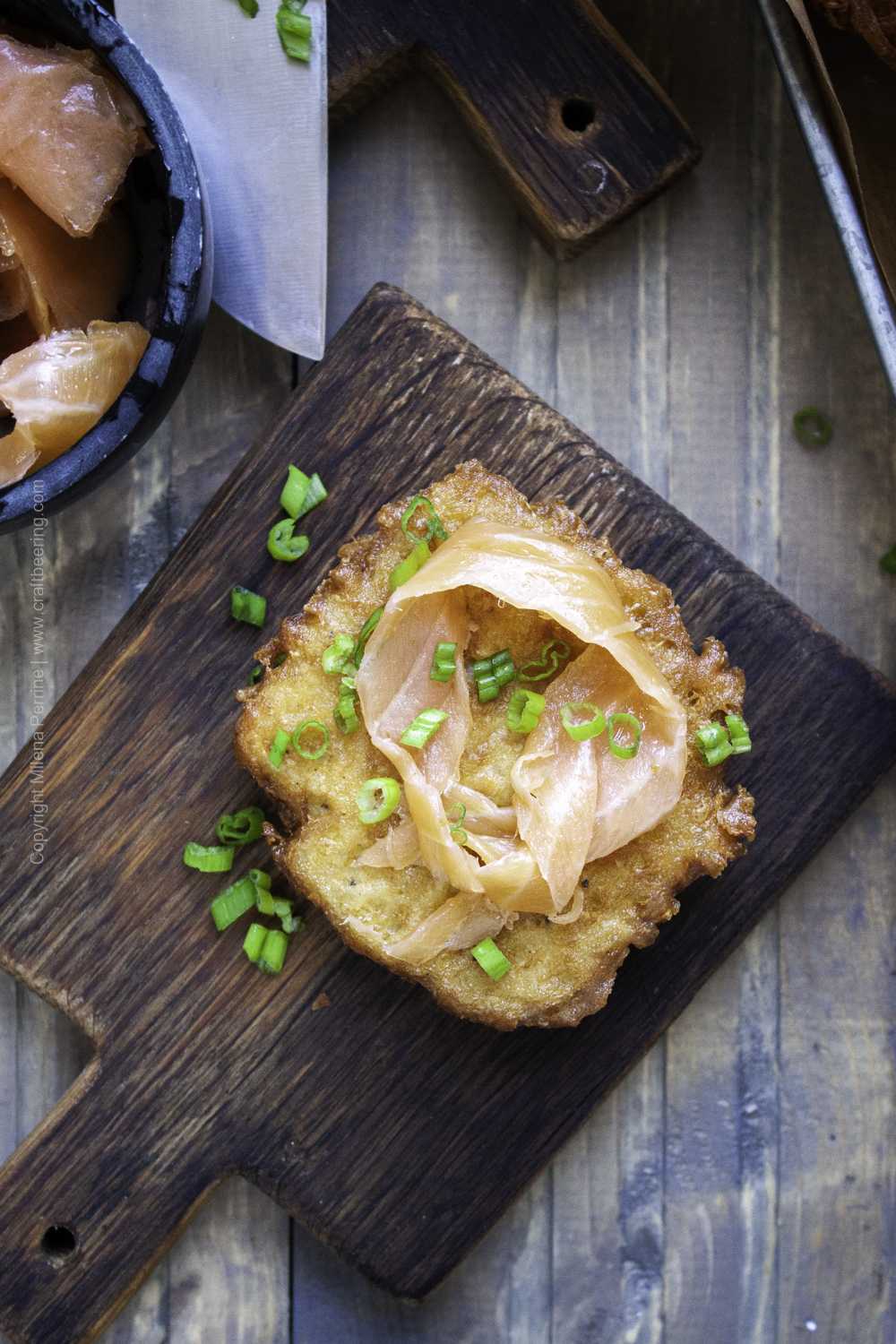 Substitute suggestion: Use 1 1/2 lb of frozen hash-browns instead. Bring to room temperature and start at Step 3 of the recipe. Add the 1 tbsp of starch.

*You can finely grate a couple of the potatoes if you plan on using their own starch instead of adding a tablespoon of starch as per the recipe.

** If you'd like to use the starch derived from the potatoes, carefully pour out the watery liquid from the bowl and save the starch settled at the bottom.