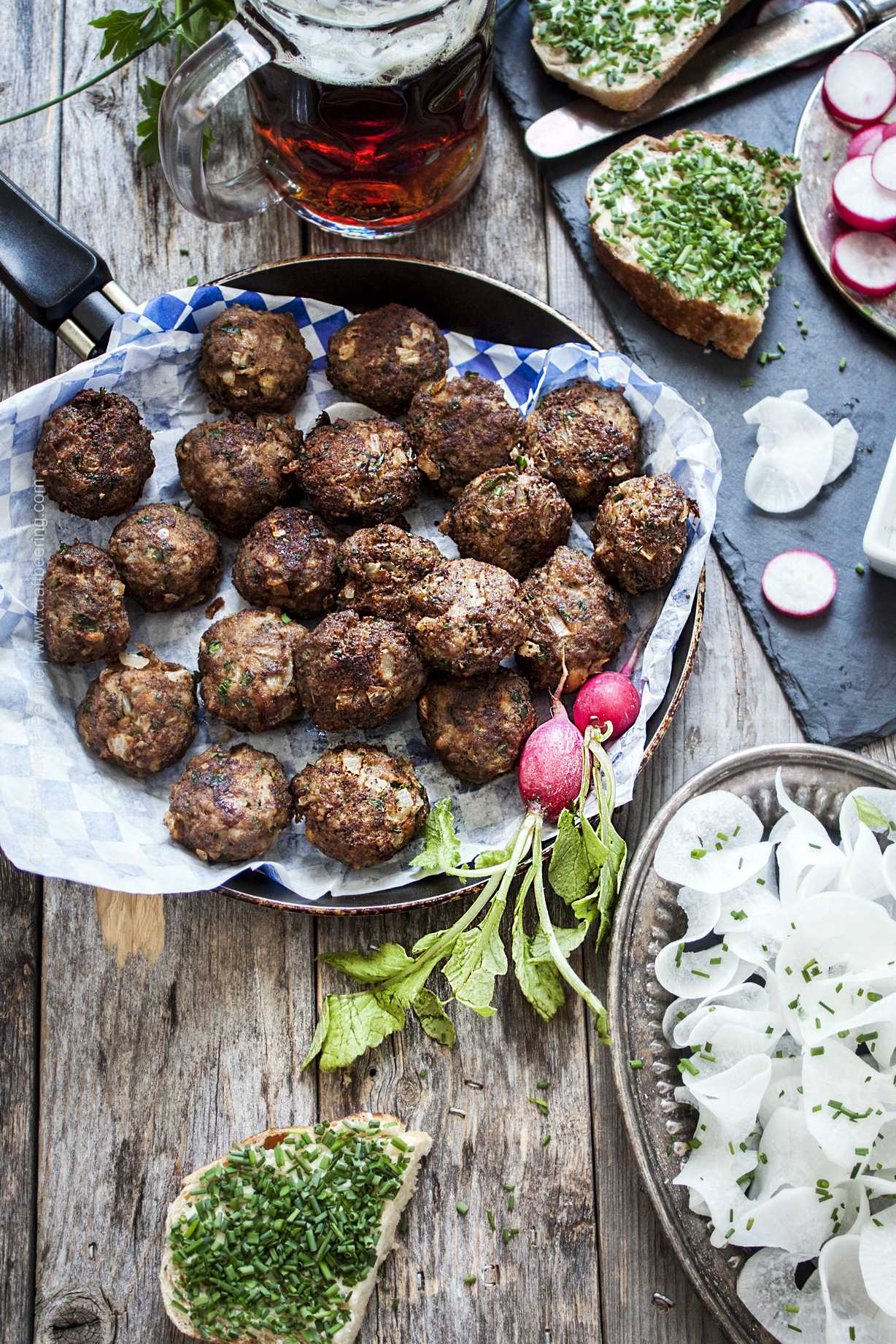 Frikadellen are pan-fried ground meat patties and are also known by other names such as ‘Fleischklops’ (meatballs), or ‘Buletten’ (also translated to meatballs and used in the Berlin area). In Austria they call them ‘Faschierte Laibchen’ (minced meat patties).

What they are not is German hamburger patties because frikadellen are the original hamburger.

Enjoyed hot or cold they are a delicious partner to most German beer styles and are present on the menus of beer gardens across the country.

Did you ever wonder why a hamburger is called a hamburger when there is no actual ham in it?

The unofficial story goes (and there are similar ones in circulation) that once a man from the German city of Hamburg who had emigrated to NYC made frikadellen for a local food fair. They smelled delicious and many were interested in buying them but they were also hot and he wasn’t very well prepared to serve them to the customers.

He decided to sandwich them between pieces of bread. That way the customers could easily hold them and enjoy them while still hot. His frikadellen were very popular and people started referring to them as the hamburger sandwich, meaning the sandwich made by the man from Hamburg. 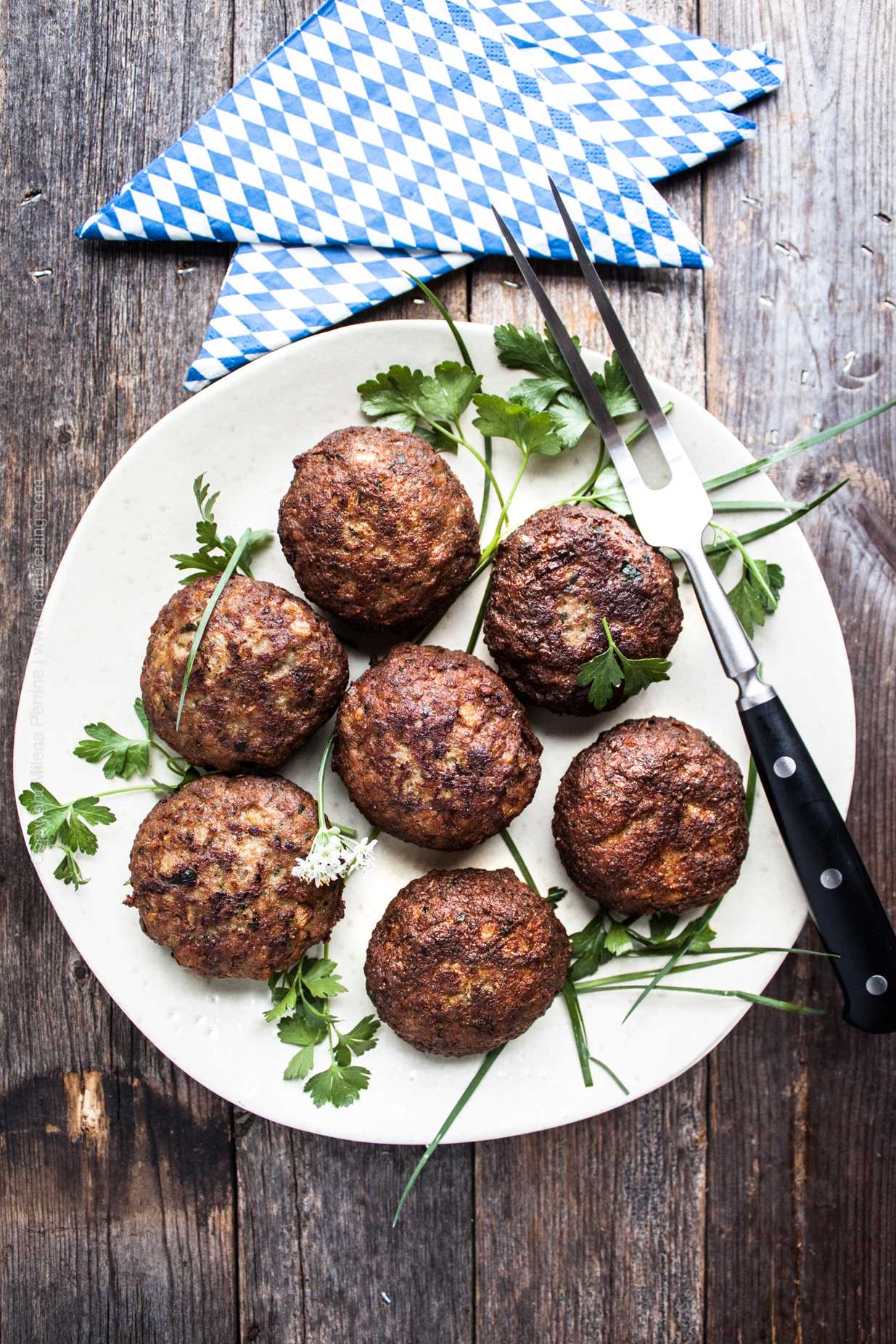 There are many frikadellen recipes out there. The one I used is authentic Bavarian and Chris has it from working at Kaltenberg Castle. He scaled it down significantly of course, to serve four.

You will need a good skillet to pan fry the frikadellen and this concludes the needed equipment.

Frikadellen as a Biergarten Food

Both regular sized and smaller bite-sized frikadellen such as the ones you see in the pictures are commonly served in German beer gardens. In Bavaria they are also enjoyed during Oktoberfest. It is up to you how big you will shape them – the recipe is exactly the same.

The larger ones are flatter like patties – see picture above. The smaller ones are rounder like meatballs.

The bread is made with sourdough starter and both white and whole wheat flour, sometimes oats are added. It is then sliced, buttered and pressed onto a layer of finely chopped chives. I wasn’t able to buy Bauernbrot and was short on time to bake a loaf so I used a crusty sourdough loaf instead. 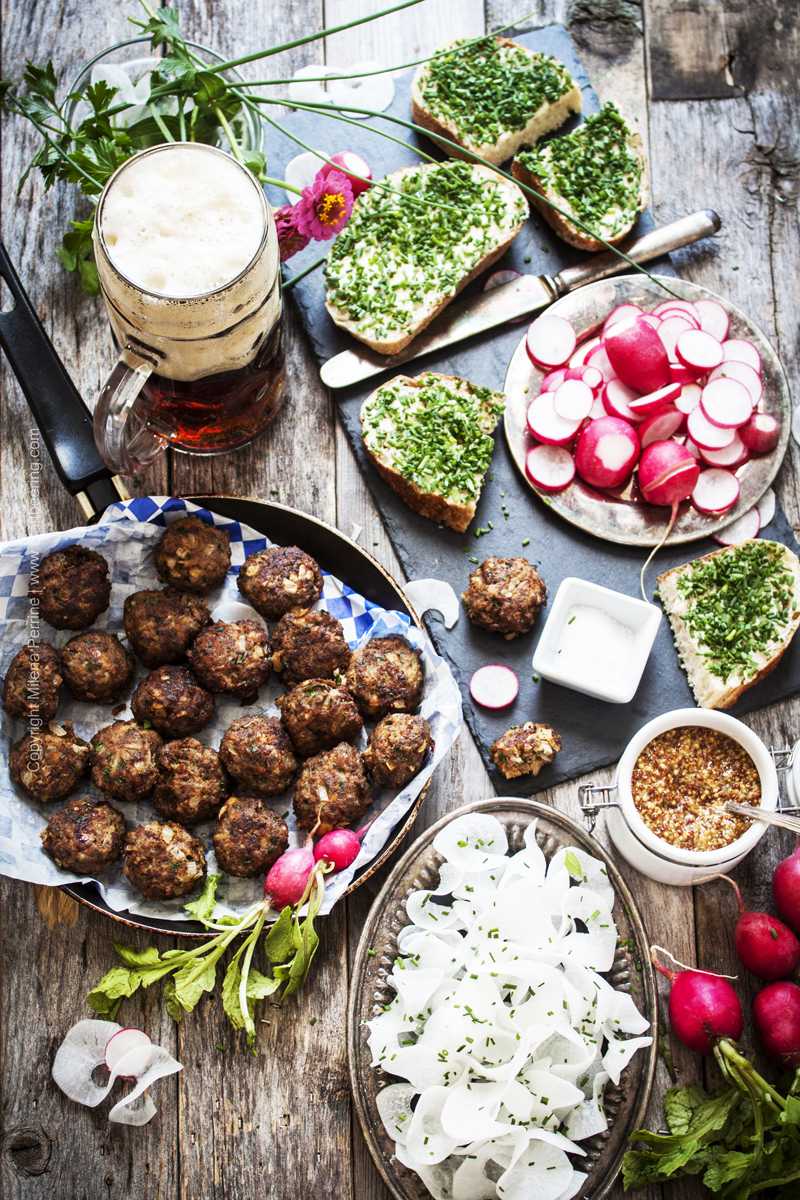 What to Serve with Frikadellen

The bite-sized frikadellen are commonly served for Brotzeit along with the Schnittlauchbrot and accompanied by beer mustard and radishes. Both the small red ones and thinly sliced/spiraled white radish called ‘Münchner Bierradi’ (Munich beer radish) are traditioanl.

Bierradi is the best known Bavarian radish variety, tastes peppery and pairs extremely well with beer and soft pretzels. The digestive juices it contains are known to help with overindulgence. One of these things where unless you try it, you will not believe it.

The classic way to slice Munich beer radish is lengthwise, after peeling the outer skin, but most commonly it is spiralized. Use daikon radish instead  even though it lacks in peppery flavor.

A spiralizer like the one in the recipe video will do the job or you can purchase a spiral attachment for stand up mixers.

Do not underestimate radishes. The status they occupy as beer garden fare is nearly at par with sauerkraut. Radishes are served with Obatzda beer cheese dip, on various brotzeit platters and commonly on their own with just a sprinkle of chives and sea salt.

This recipe yields 8 large frikadellen patties or about 20 small meatballs.

The Schnittlauchbrot (open faced chives sandwich is a traditional accompaniment to small frikadellen. So are the radishes.