Käsespätzle is a symbolic dish in Bavarian cooking and on beer garden menus across Germany. We show you how to cook it, including how to make spätzle from scratch in an easy to follow tutorial. 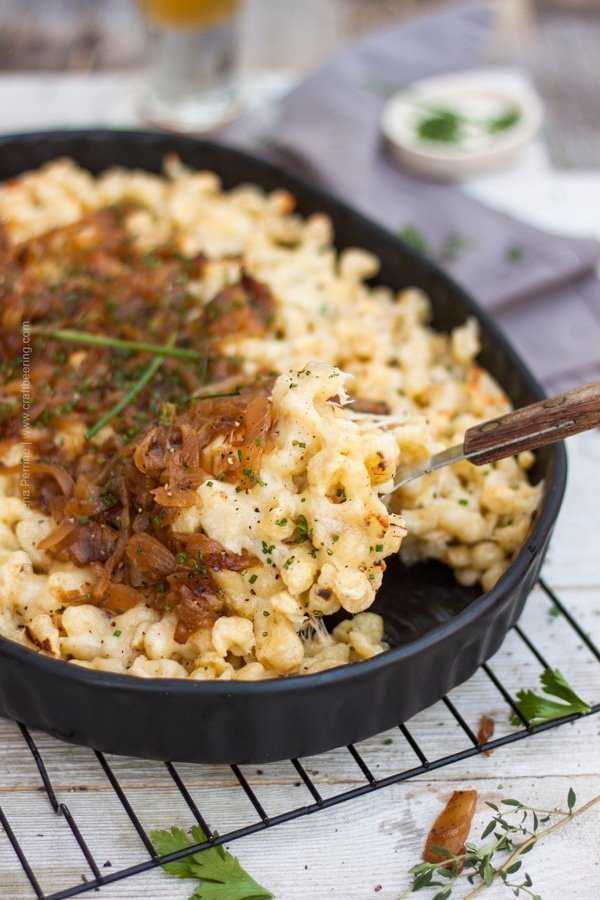 What is Käsespätzle Anyways?

Käsespätzle is a Bavarian egg noodles dish with butter and cheese. In English the name means ‘cheese spätzle’ and is pronounced ‘kays-shpatz’l’. Sometimes the spelling ‘kaesespaetzle’ is used in English to convey the umlaut a sound which falls between a and e.

The word ‘spätzle’ (plural for Spatz) itself means ‘little sparrows” and has to do with the shape of the little egg noodles.

Spätzle is prepared in a variety of shapes actually, depending on the tool used to cut/shape them. Its texture is, in my opinion, much better than that of elbow macaroni or similar. In comparison it is looser and softer – not at all chewy. Perfectly light small pieces of boiled dough.

Käsespätzle is one of the most popular dishes served in beer gardens across Germany, especially in Bavaria (it originated in the Swabia region). There are small regional differences in its preparation – in Swabia they use a cheese spätzle recipe like Chris’. Rather Chris uses a Swabian recipe..  Near Munich they often follow slightly different steps. In Austria Käsespätzle is known as Kasnocken and is a popular dish in mountain lodges of the Austrian ski areas. 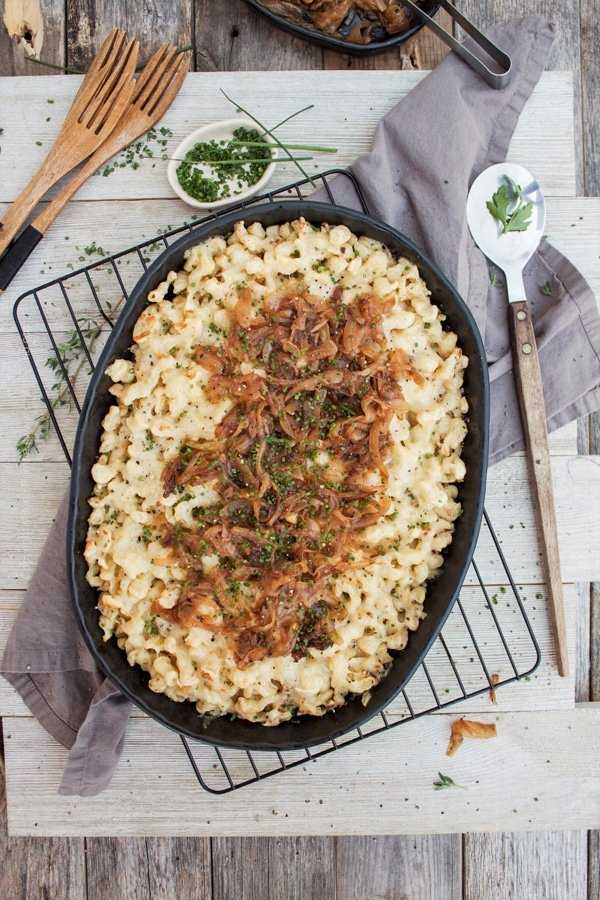 For this post Chris prepared a Swabian version of the dish which he learned during his Kaltenberg castle days (with homemade spätzle because it always tastes better).

Also, the types of cheese traditional for the dish will never have it look or taste like mac and cheese (assuming the most commonly used cheddar with its orange hues and sharper flavor). Lastly while mac and cheese is drenched in a cheese and cream sauce, traditionally Käsespätzle is coated in melted cheese and a little bit of melted butter. And it tastes soooo good. And it pairs with beer even better.

For variations of the recipe read the Tips and Twists section under the recipe card.

Overall as long as you use high quality spätzle, traditional good melting cheese (more info below), onions and chives for garnish you can recreate this classic dish without too much effort and enjoy it with your favorite German brew. Or a saison. Saisons seem to pair extremely well with everything.

How to Make Spätzle from Scratch

Homemade spätzle is very easy to prepare. Don’t let your unfamiliarity with the process intimidate you and prevent you from making it.

Not hard at all as long as you have a mixing bowl, wooden spoon and a colander and even easier if you use a stand-up mixer and an inexpensive spätzle maker (so fun to use) like ours. Read more on spätzle makers at the end of this post.

There are only a few simple steps you need to complete to prepare delicious homemade spätzle.

Once you have the dough, it is time to make the spätzle.

It really doesn’t take that long nor is it that difficult. You might actually enjoy the process.

Chris learned the art of making spätzle while working at the Kaltenberg Castle Royal Bavarian brewery and huge beer hall in Lionshead Village (Vail, Colorado). The place is no longer there, but he still remembers standing on a crate next to a huge pot of boiling water and grating tons and tons of dough to make spätzle.

Spätzle can be served in any number of ways. Traditionally it is a side for roasts, but you can see it accompanying anything from Schnitzel and Pork Cordon Bleu to Goulash. And, of course, when eaten with cheese as a main dish it is known as Käsespätzle.

Can You Buy Premade Spätzle?

Of course you can. Typically it will be in dry form, just like pasta and you will need to boil it, strain it and then proceed to use it. Certain stores carry frozen or refrigerated fresh spätzle – if you are in luck yours does to. 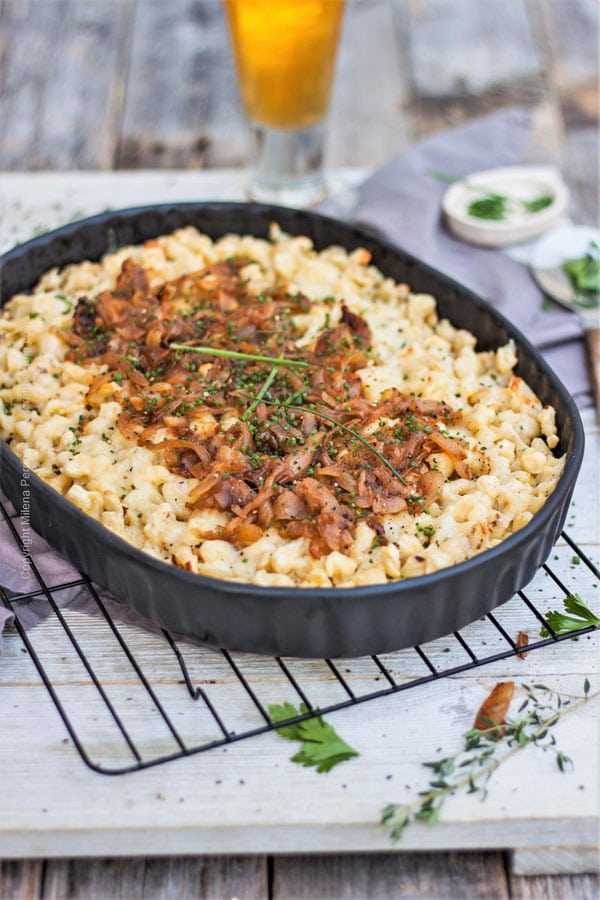 How to Make Käsespätzle

Once you have secured fresh cooked spätzle you need to consider the cheese element of the dish.

Traditional Käsespätzle cheese is mild and melts easily. Look for Swiss cheese such as Emmentaler or Gruyere. Next, you simply must have fried onions. Most frequently they are sauteed until caramelized, but often times they can actually be fried to crispy. The whole dish is traditionally garnished with finely chopped chives.

Follow these easy steps to a decadent Käsespätzle dish. 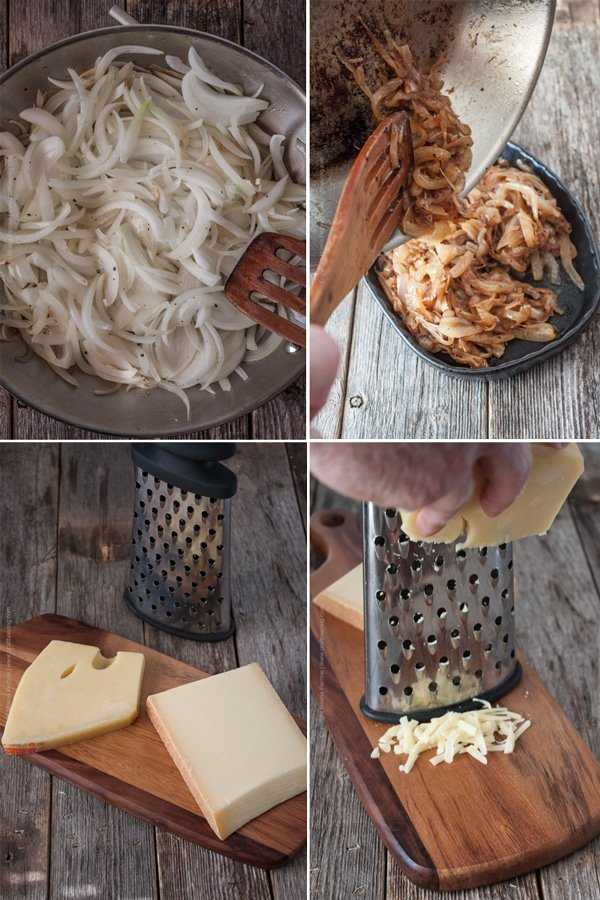 There are a few different kinds of spätzle makers. You can also always use an ordinary colander, add dough to it and use a spatula or dough scraped to force the dough through the holes and into the boiling water. 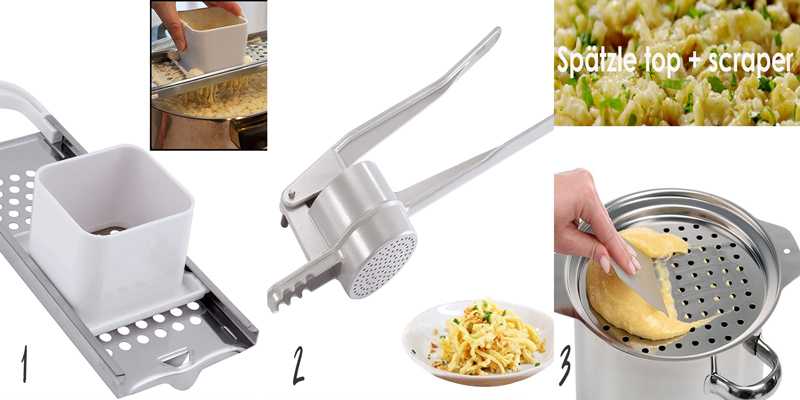 For Spätzle (if making from scratch)

Spätzle (if making from scratch)

If making the spätzle from scratch be advised that this recipe will yield more than you need to prepare a 9 x 13 inches casserole of Käsespätzle. You can freeze or refrigerate (tossed in 1 tsp olive oil) the leftover spätzle and use later.

Alternatively, prepare half the quantity using half the ingredients and use a slightly smaller casserole than 9 x 13 inches.

If using store-bought spätzle, follow the package instructions and then proceed with the Käsespätzle recipe as written. 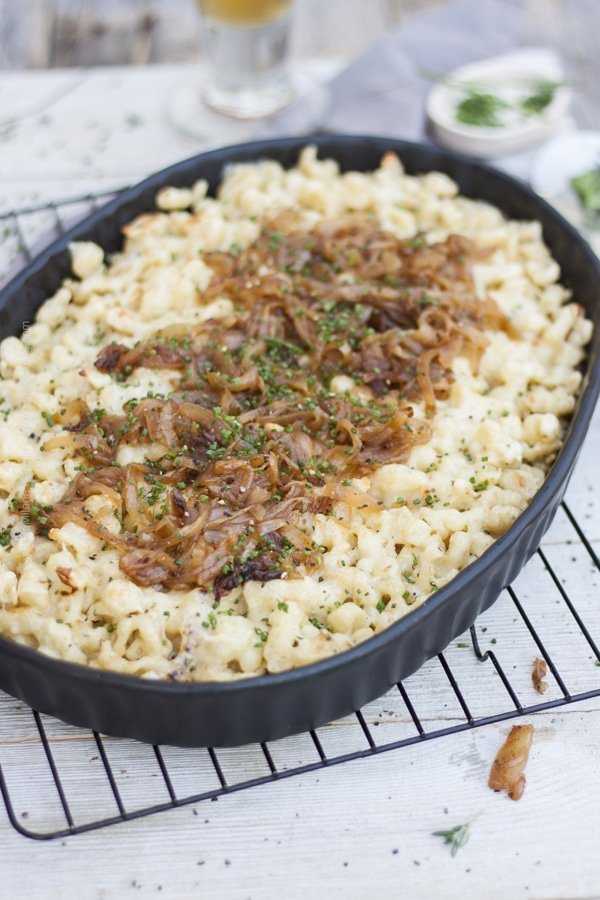