Schweinshaxe recipe for the quintessential dish of the Bavarian beer halls. Learn to make a fork tender and juicy roasted pork hock (knuckle) with crispy skin. 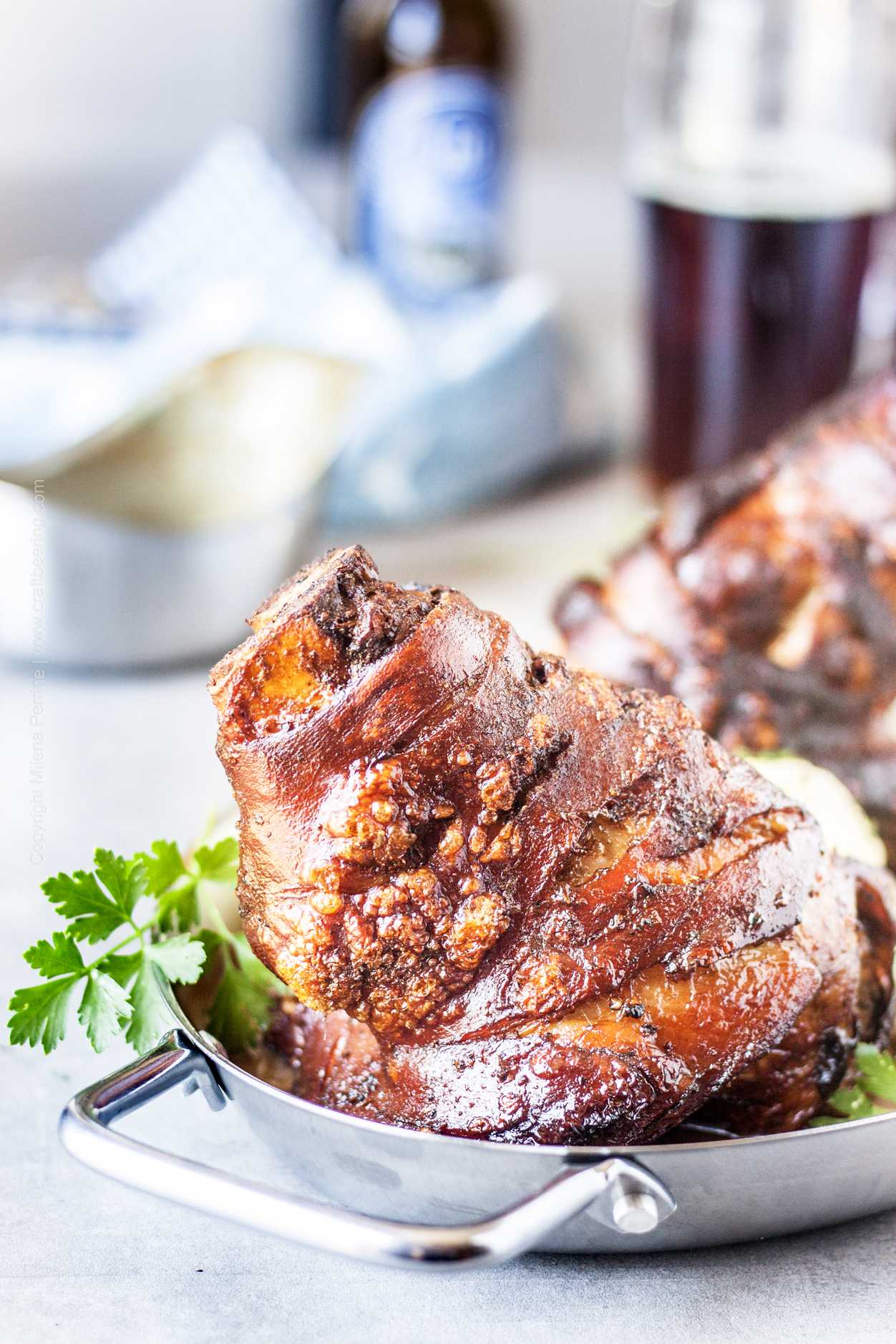 What is Schweinshaxe (German Pork Hock)?

Schweinshaxe – roasted, skin-on pork hock (knuckle) is a veritable symbol of Bavarian cuisine and beer culture. You will find a crispy and tender German pork knuckle on the menus of beer halls, beer gardens, restaurants big and small and even street food stalls all over Bavaria and other parts of the country.

The traditional way to roast pork hock is on a spit. The knuckles are skewered on long metal rotisserie rods and and set up in front of a heating element.

One of the most spectacular displays of roasting pork knuckles we have come across is at Haxnbauer in Munich, Germany. If  you visit the city during Oktoberfest, the Haxenbraterei near the Hofbräu tent on the Wiesn is a great place to enjoy Schweinshaxe. Every year more than 80,000 pork hocks are consumed on the Oktoberfest grounds alone. 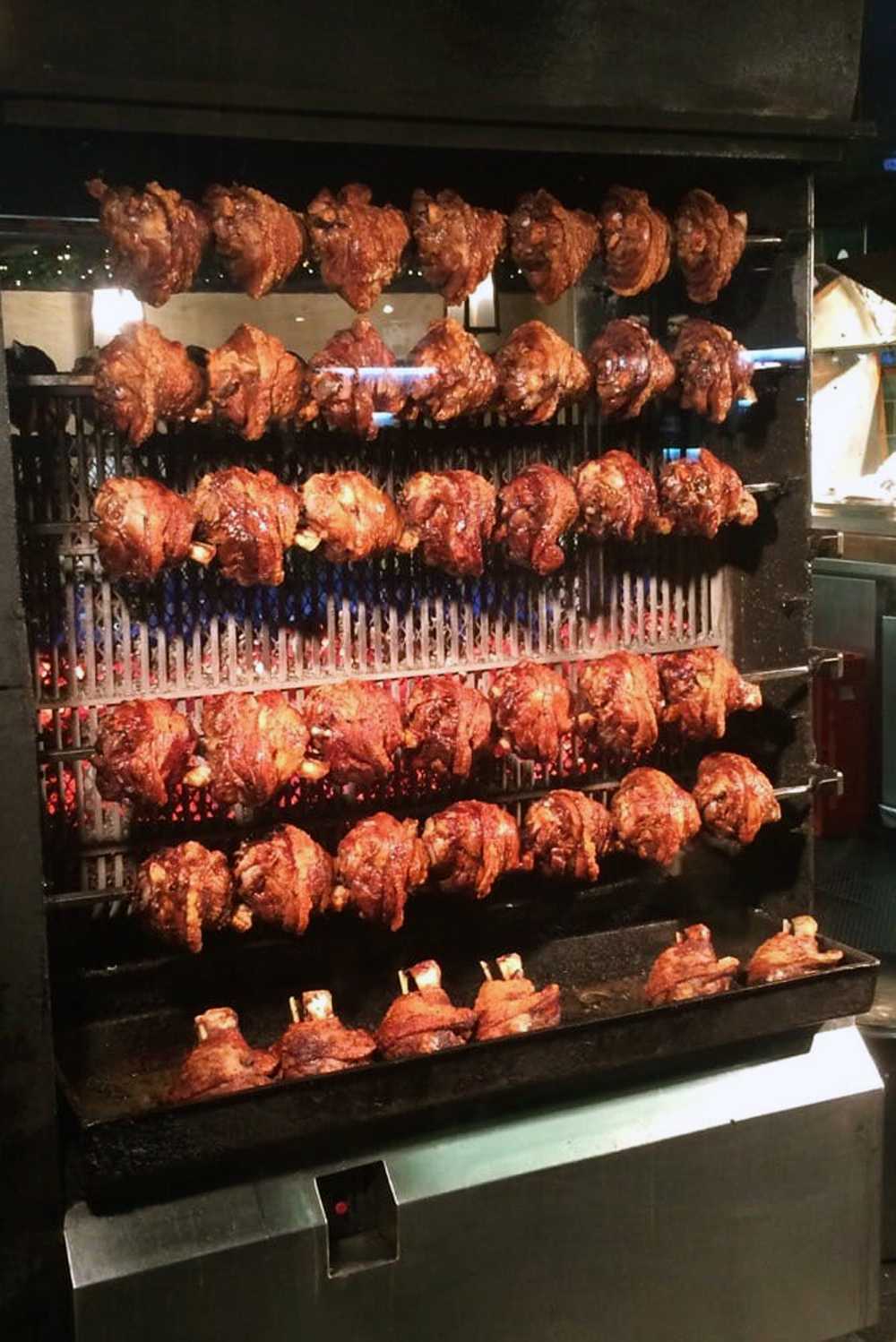 Pork hocks roasting at Haxnbauer in Munich. Each Schweinshaxe is weighed when ready to be served and the price charged to patrons is calculated based on the weight.

IMPORTANT NOTE: In the US the words pork knuckle, pork hock and pork shank are used interchangeably to reference the general area of the pig’s leg where the foot connects with the shoulder or hip of the animal (depending on front or back feet).

Technically, shanks have more meat (especially hind shanks) because they come from the area closer to the shoulder or hip, while hocks are a bit bonier as they constitute the lower portion of the cut, closest to the foot.

The reason the word knuckle comes into play is because it is a direct translation from German – Schwein=pig, haxe=knuckle and subsequently Schweinshaxe=pork knuckle. Overall, whether you say pork hock, pork shank or pork knuckle you will be referencing the same thing.

Ingredients You Need to Make German Pork Hock at Home 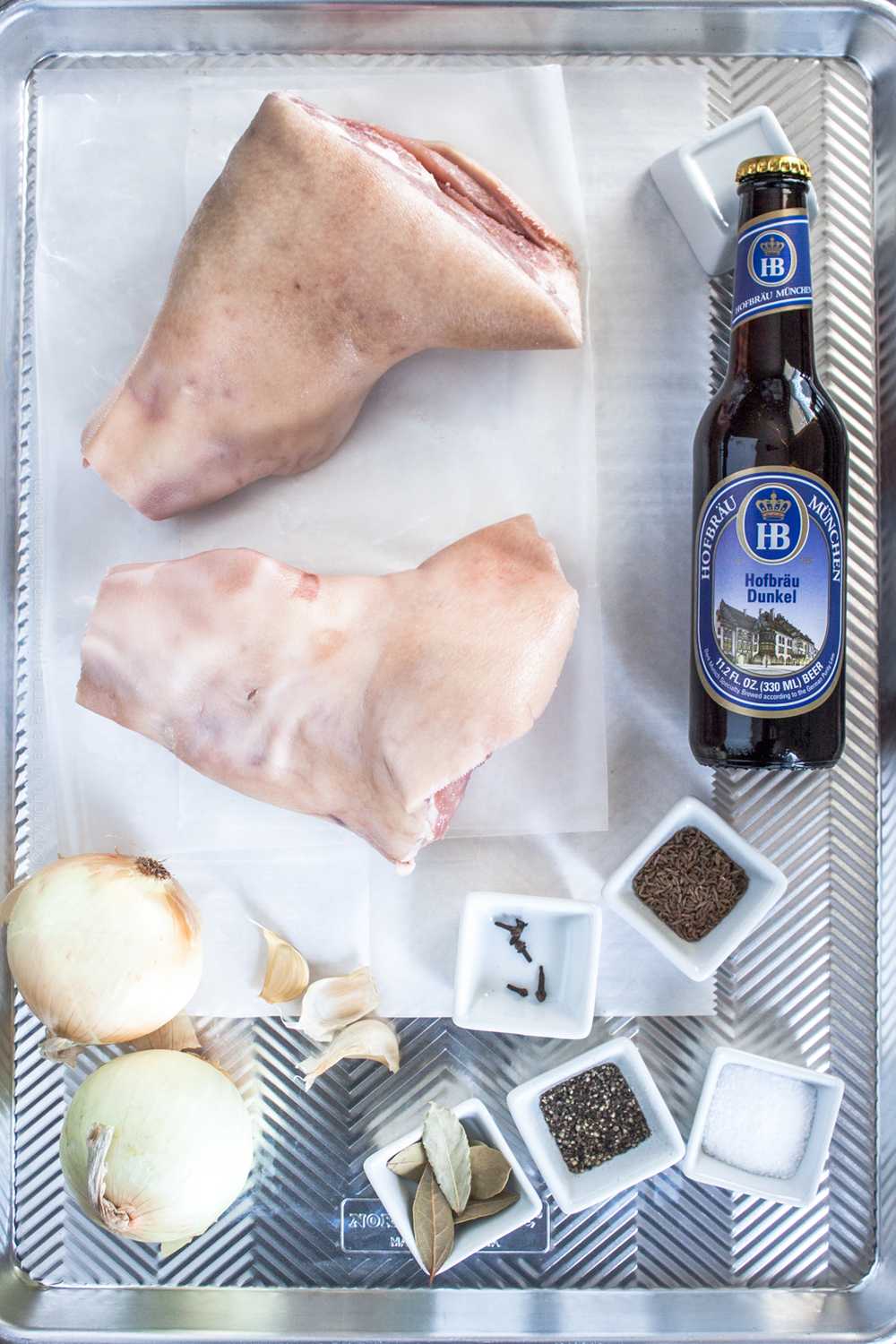 Where to buy Schweinshaxe?

In Bavaria pork hocks are sold with the skin (rind) attached and during roasting it becomes nice and crispy. To find skin-on pork hocks in the US you must either go to the butcher and request them or buy them online.

We used to ask the local butcher for skin-on pork knuckles until we happened upon the choice offerings of D’Artagnan meat purveyors and are now devout fans of the cut they sell.

They offer porcelet hindshanks (affiliate link, if you purchase this product we may receive a small commission at no cost to you) imported from Canada that are just perfect for German style slow roasting. Once you order Schweinshaxe from D’Artagnan they are shipped promptly and are delivered to you perfectly packaged for the journey and still frozen.

Below are the last ones I pulled out of our freezer. We typically roast two hocks for four people. 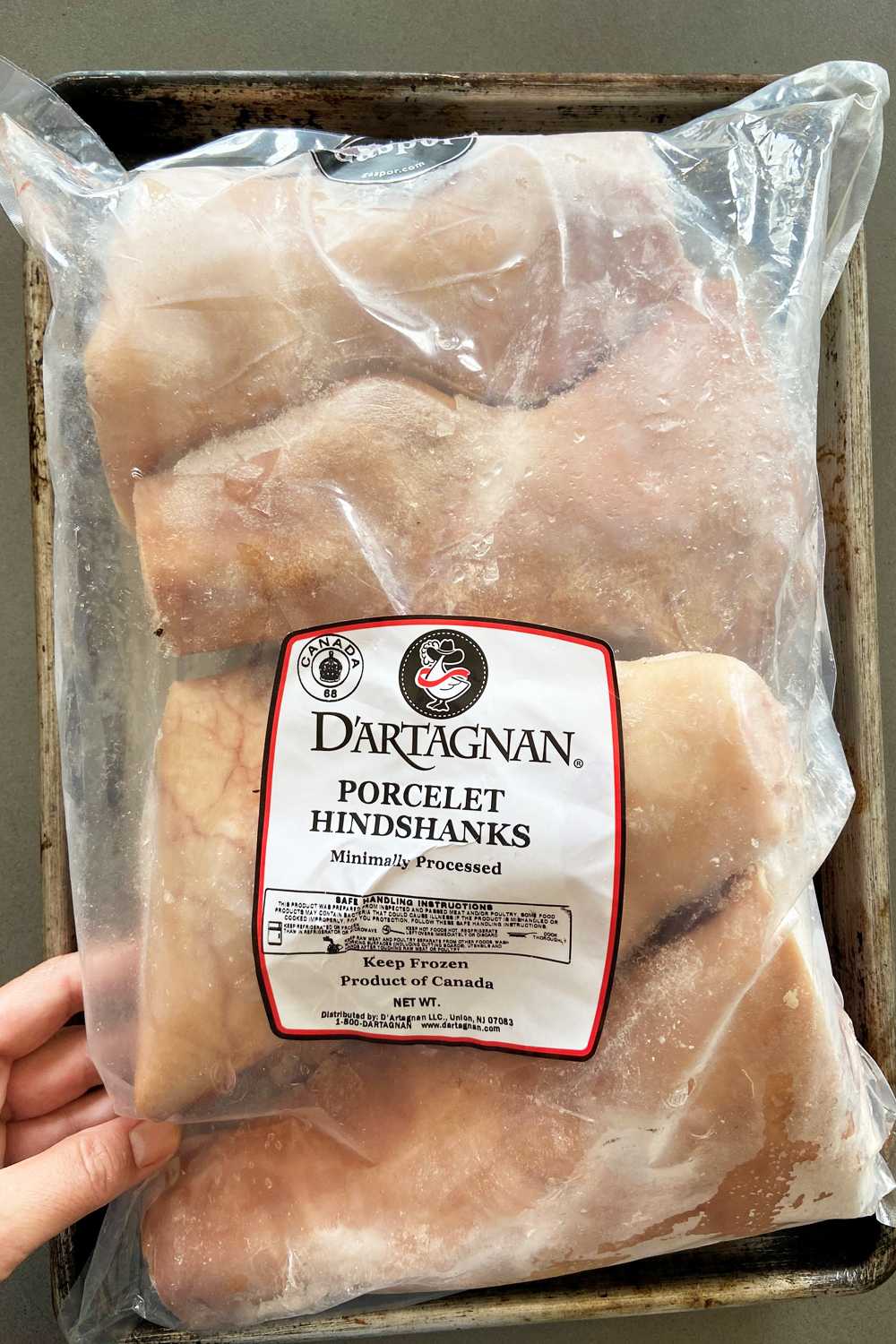 How to Roast Schweinshaxe

You can approach roasting pork hocks in several different ways. The key to fall-off-the bone tender meat is to allow the collagen rich connective tissue abundant around the bones of pork knuckles to melt away and flavor the meat as it liquefies. Therefore lower temperatures work better.

If you happen to have a built-in or stand alone rotisserie oven you can approximate the pit roasting method without too much effort.

Here we assume that you will be using a regular oven. If your oven is fan assisted (convection oven) you should reduce the temperatures noted by about 35-40 F. To save a little bit of time you can poach the pork hocks prior to slow roasting them. It is up to you.

Regardless of whether you poached prior to roasting follow these steps:

Most Popular Sides for Schweinshaxe 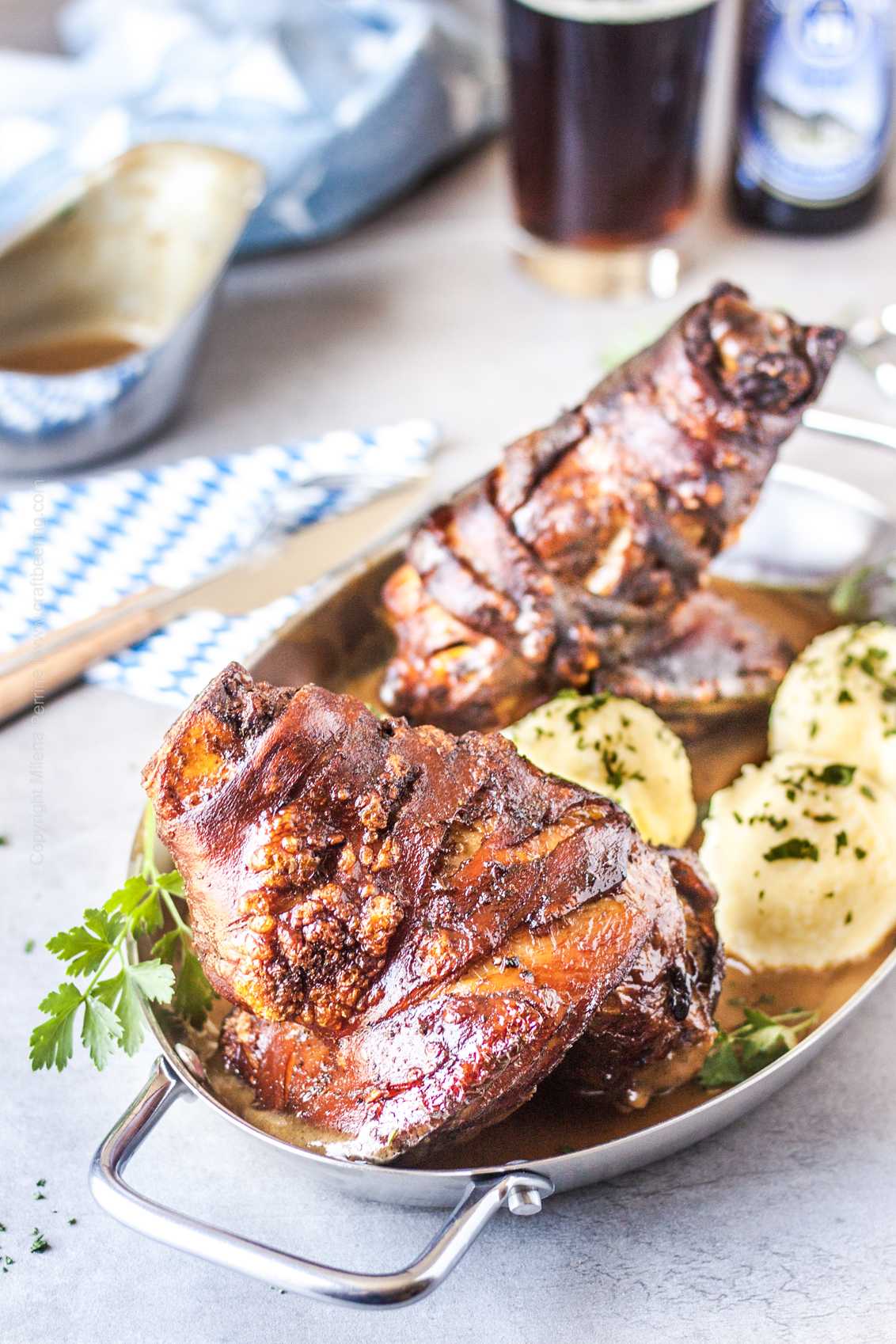 Slow roasted Schweinshaxe is typically served with one of these sides, popular in Bavarian cuisine:

If you would rather make Braised Pork Shanks like these below – here is a wonderful recipe for you!

2. Slice the onion into rings and place on the bottom of a roasting pan. Grind 1 tbsp caraway seeds (use pestle and mortar or spice grinder) and mix with ground pepper and salt.

3. Score the skin (rind) of each pork hock and rub with the spice mix from previous step. Place hocks on top of onions, with the tapered end facing up.

4. Slow roast for about 90 -120 minutes (depending on how large the hocks are, about 90 mins for 1.5 lbs hocks and about 120 for larger). Add the beer and a little bit of water to the pan and continue slow roasting for another 60-90 minutes. If the skin is browning too fast consider loosely tenting it with foil.

5. Transfer the hocks to another pan and keep the pan with the drippings and onions (see gravy below). Place the hocks back in the oven and either roast at 400 F or broil, until the skin gets crispy and puffy. Watch them closely during this step to avoid burning.

1. Bring 4 quarts of water to a boil. In a deep pot place the pork hocks, one chopped onion, garlic cloves, bay leaves, 1 tsp caraway and whole cloves. Add boiling water until the hocks are covered. Poach the hocks on low ( do not simmer) for about 60 minutes.

2. Preheat oven to 300 F. Cut an onion into thick rings and place at the bottom of a roasting pan. Remove the hocks from the poaching liquid and score the skin. Place the scored hocks on top of the onions, tapered end pointing up.

3. Grind 1 tbsp caraway seeds (use pestle and mortar or spice grinder) and mix with ground pepper and salt. Rub the mix over the hocks and place in the oven for 60 minutes.

4. Add the beer to the pan and continue slow roasting for another 60 minutes. If the skin is browning too fast consider tenting it with foil.

5. Transfer the knuckles to another pan and keep the pan with the drippings and onions (see gravy below). Place the hocks back in the oven and either roast at 400 F or broil, until the skin gets crispy and puffy. Watch them closely during this step to avoid burning.

Add 1 cup of hot water to the pan drippings and scrape the brown bits from the bottom. Transfer to a blender and blitz until smooth. Pour into sauce pan and bring to simmer. (If the consistency is too thin, add a slurry (1 tbsp corn starch mixed into 1 tbsp cold water) and whisk it in to thicken.)

Remove from heat and serve with the Schweinshaxe.

Roasting pork hocks is best done at low temperature (about 275-300 F) to allow for the collagen to melt. This will make the meat tender. The fat from underneath the skin of the hocks makes the meat juicy,

Exact times are tricky because the size/weight of each pork knuckle matters. The strength of your oven is also important - no two ovens are calibrated the same. Make adjustments to temperature if you notice that the skin is browning too fast, or loosely cover with tin foil.

Generally a 1.5 hock will need about 2 1/2 hrs of slow roasting plus a bit more at high temperature (400 F) or under broiler, as needed until the skin becomes crispy.

Because a pork hock can weigh up to 2 1/2 lbs adjustment to these times and temperatures should be made on an as needed basis.

If your oven is fan assisted (convection oven) you should reduce the temperatures noted by about 35-40 F.

We are affiliates for Amazon and other vendors and qualifying purchases you make support our blog at no cost to you.

What Should I Make For… – Bavarian Soft Pretzels