A German meat and cheese board with German cheeses and cold meats you can easily find in the US. Paired with Schwarzbier. 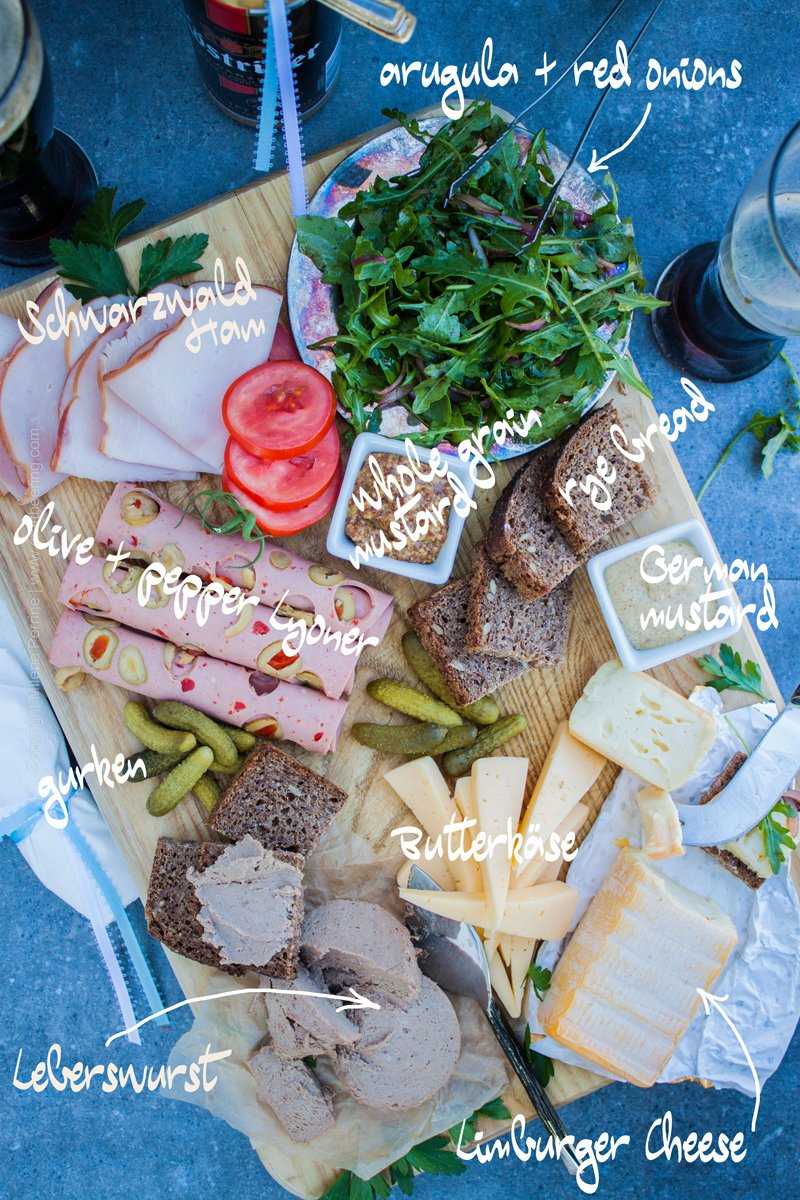 If you are looking for a traditional Brotzeit platter the way the Bavarians enjoy it, take a look at this post.

Köstritzer Schwarzbier – A black lager, a style with a long history that was first brewed in the eastern parts of today’s Bavaria and the south-west lands of the adjacent Czech Republic. The Köstritzer brewery in Germany was one of the oldest producers of Schwarzbier, they started brewing the style in the middle of the 16 century. In 1991 they were acquired by Bitburger Braugroupe. The beer is brewed under the regulations of the Reinheitsgebot (German Beer Purity Law). 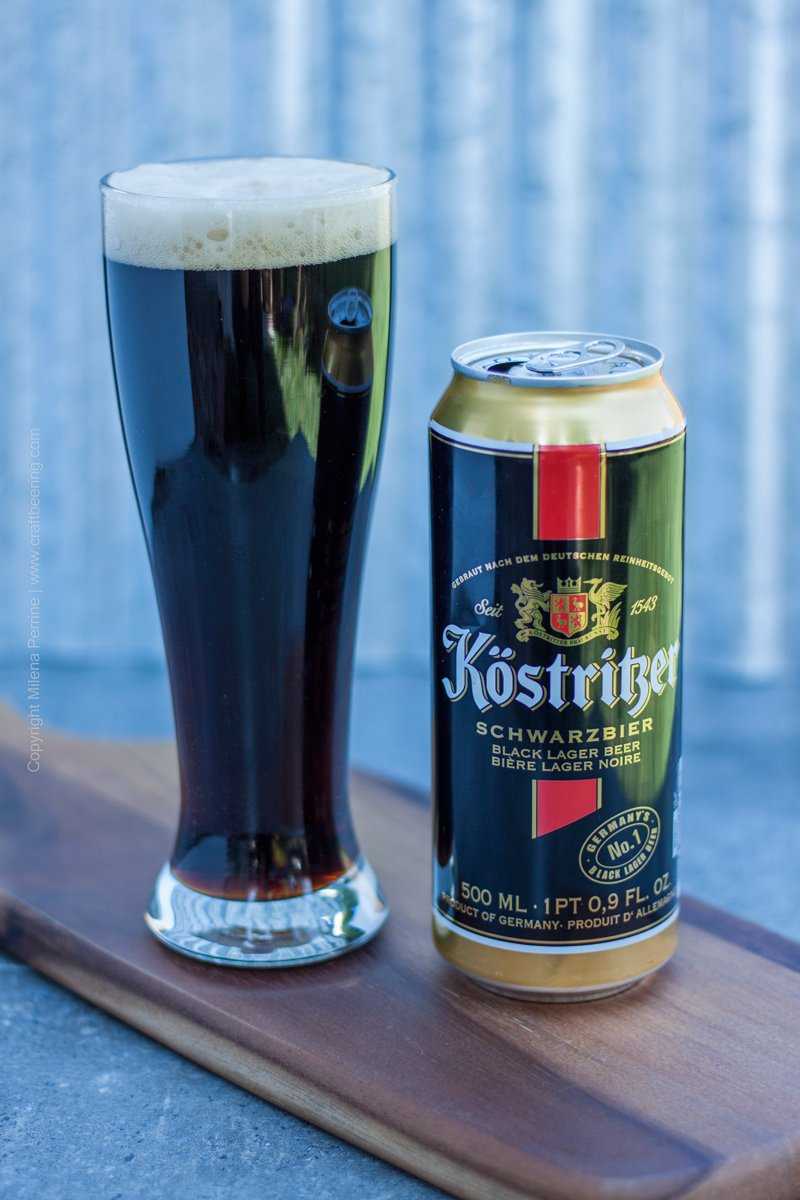 As a style, Schwarzbier (Black beer) has gone through a few transformations (considering that archaeological evidence suggests that it had been primitively brewed as far back as the late eighth century BC, the time of Celtic invasions into Central European territories).

Even though the first thing you’d observe about it is its pitch black color, this beer is actually very clear and has the brilliance and very fine carbonation pale lagers are known for, except that both are disguised by the intense color. If you look at the very bottom of the glass in the picture you will notice hues of deep mahogany, a testament to the characteristic clarity of Schwarzbier.

Many people see a Schwarzbier for the first time and assume that it will taste like and have the mouthfeel of a stout. No truth to such assumptions. It tastes nothing like a stout. In fact, if you first sampled it while blindfolded, you would find it similar to a Czech pilsner, with somewhat of a slight hint of cocoa and/or roasted coffee beans added to the flavor profile. It is perfectly balanced – bitter and sweet exist in harmony, both on the lower side of the spectrum. A characteristic Noble hops kind of elegant bitterness, every sip ends clean and quite dry, much like a pilsner. Hence, it is sometimes called ‘black pilsner’. The ABV is low, usually just below 5%.

We chose Schwarzbier because it pairs so very well with the ‘participants’ in our German meat and cheese board. Especially with the cheeses and the rye bread. Here is why we included each item. 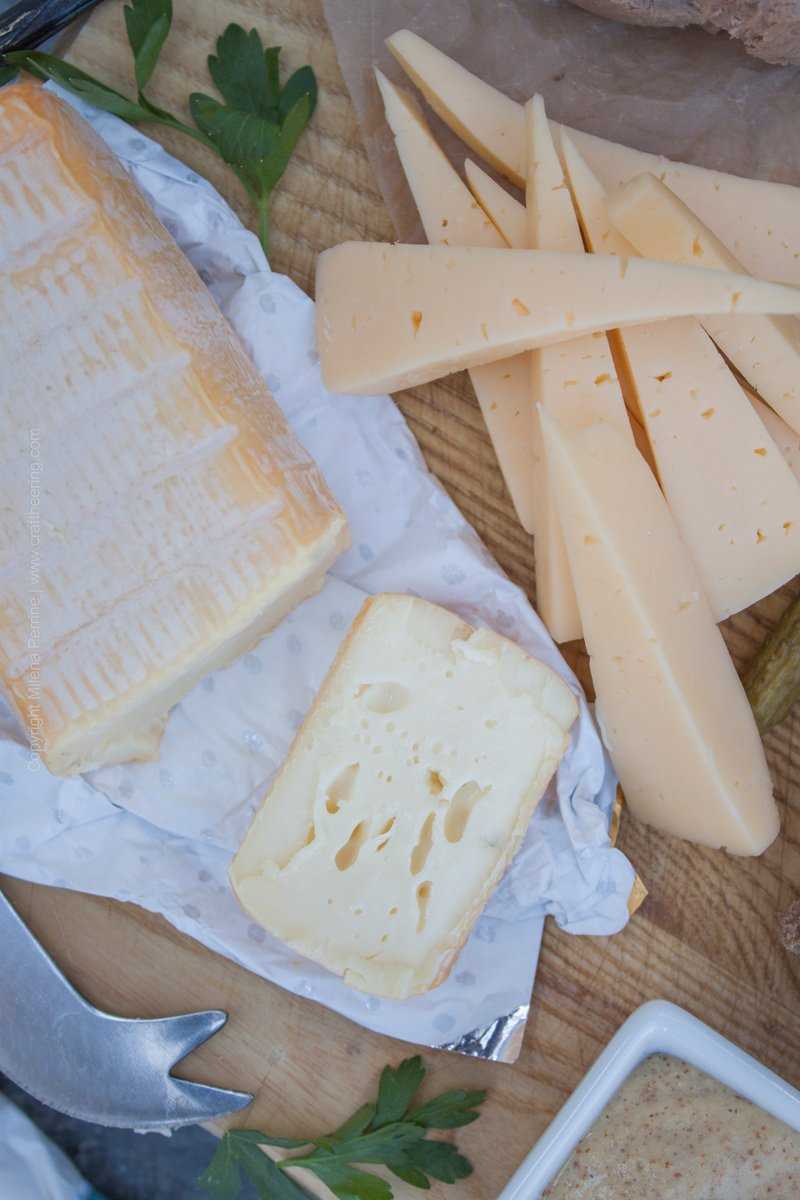 German Meat and Cheese Board ‘Participants’

Butterkäse  – This is the cheese on the right in the picture above. Buttery in consistency and appearance, it is a dream to spread over toast, rye bread or even nut crackers. With a mild flavor (similar to that of young Gouda) Butterkäse (‘butter cheese’) is the quintessential German cheese. It is semi-soft and made of cow’s milk, aged for only a brief period of time. Melts beautifully, try it in a beer cheese sauce like this one.

Limburger – This is the cheese on the left in the picture. A semi-soft cow’s milk cheese, aged for 2-3 months. It has a characteristic smell (similar to Raclette cheese) due to the bacteria used to ferment it (same one for both cheeses, Brevibacterium).

Today it is almost exclusively made in Germany, but its origins are from an area known as the old Duchy of Limburg in Belgium. In the US, it is produced in Wisconsin. Germans love to spread it over rye bread, with a red onion garnish and pair it with lagers (or coffee when the rye bread and Limburger cheese are eaten for breakfast, which is very often). 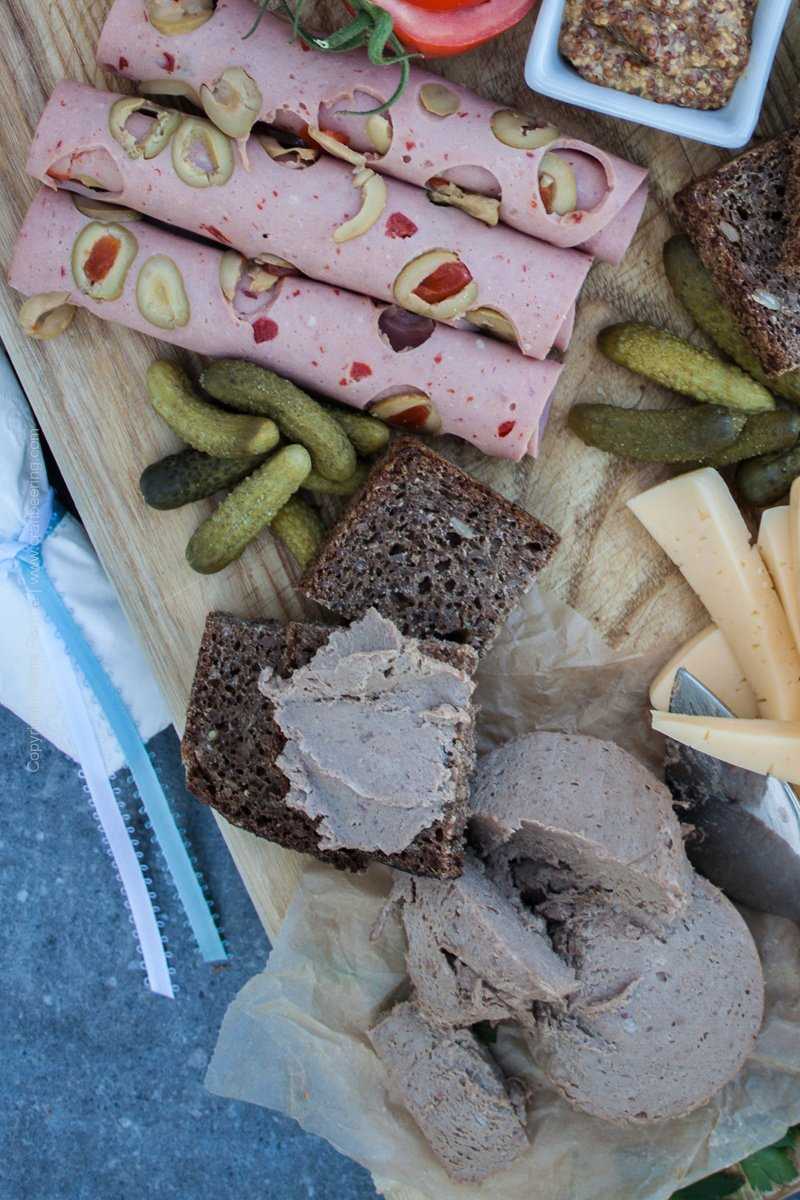 Leberwurst – This well known spreadable liver sausage is Chris’ favorite German treat. He eats it on top of all sorts of crackers and even adds a chunky slice of it to his breakfast hash potatoes and eggs. It seems like we always have Leberwurst at home. One delicious pairing is to cook sage and olive oil lentils and drop a few chunks of Leberwurst on top. 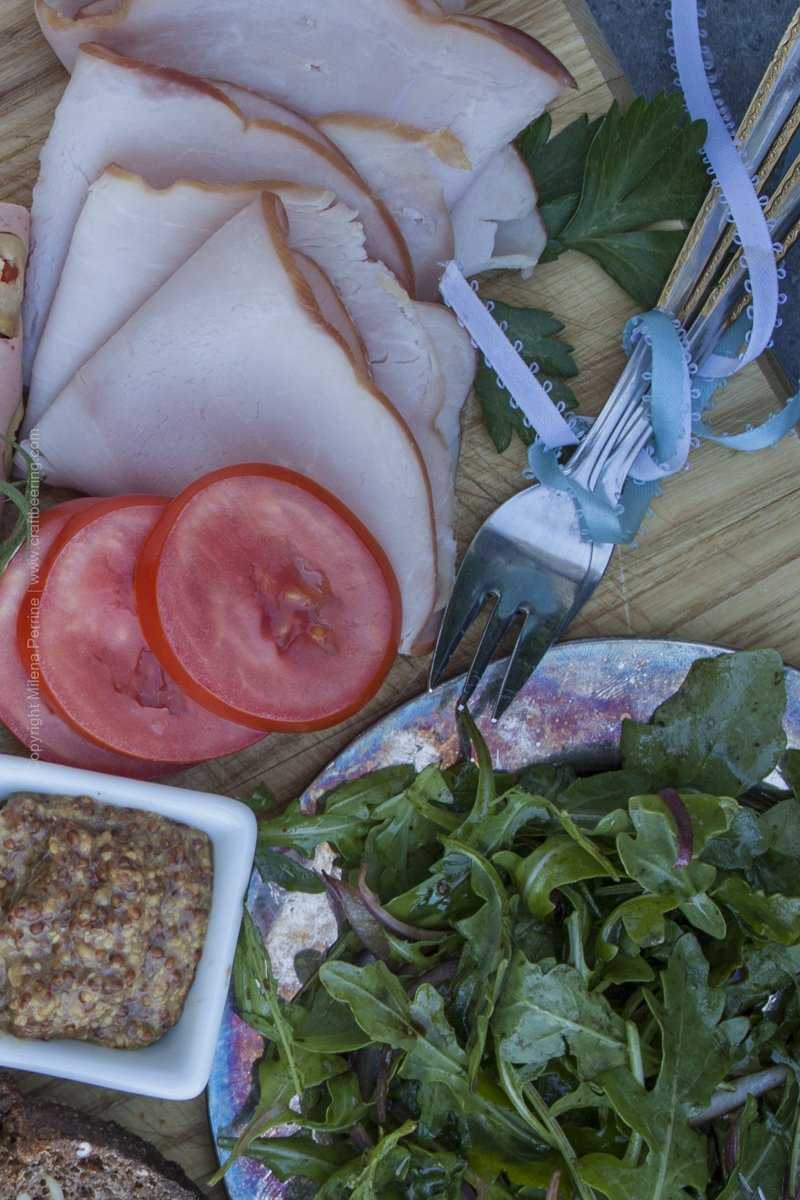 Schwarzwald ham (Schwarzwälder Schinken) – We could not leave out the emblematic ham of the state of Baden-Württemberg in the south-west of Germany. Schwarzwald is a large forested region in the state, it literally means Black Forest, hence the popular US name, Black Forest ham.

Schwarzwald ham is lightly smoked with beech wood chips. It is delicate, with very tasteful hints of smoke and partners beautifully with the Schwarzbier. Chris and I have such fond memories of a summer we spent together in Freiburg and the surrounding Schwarzwald area a few years ago. He was all over the craft beers sold as singles in the grocery store, right by appetizing selections of chees and cold meats. I was taking German classes every afternoon, and many times once I came home after class he’d already have prepared a nice snack board and we’d have a beer or two before venturing around the city to find somewhere to eat dinner. On weekends we would sit in the shade of a Biergarten and order a charcuterie platter, which usually included Schwarzwälder Schinken. 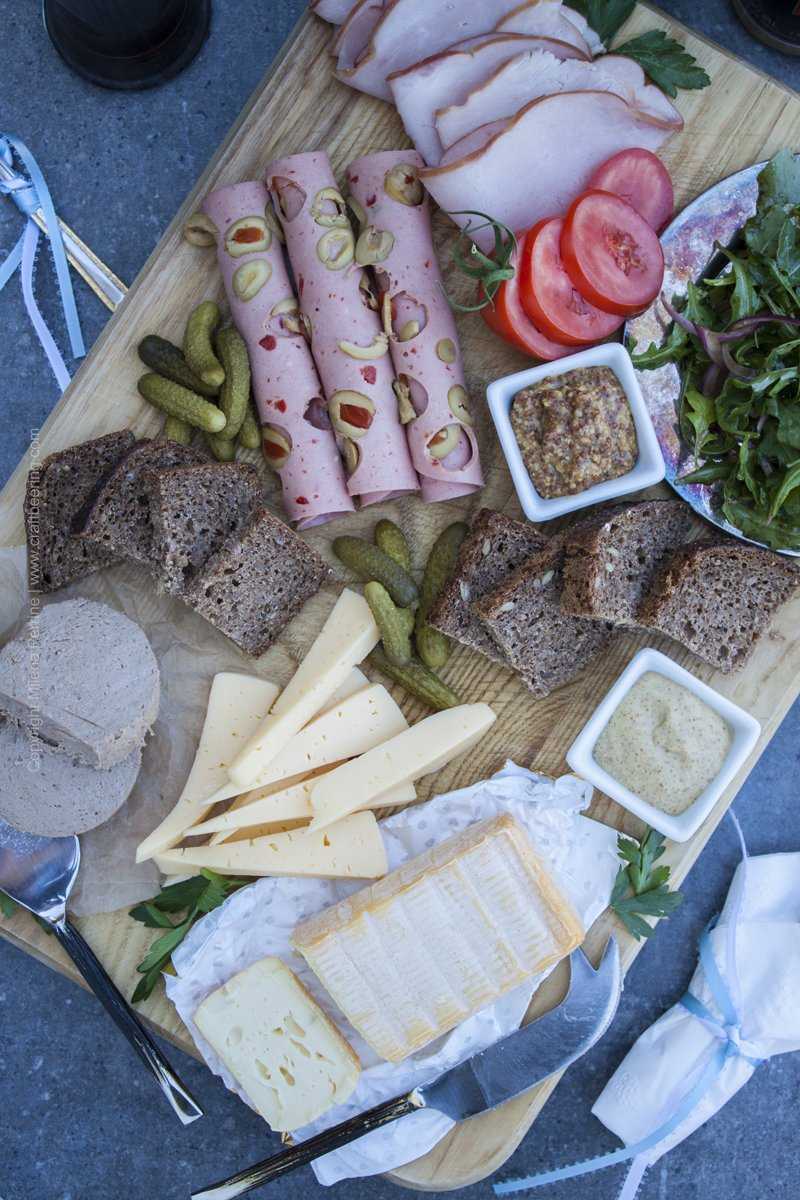 The pickled dill gurken, German and whole grain mustard, tomato slices and parsley are a must for a German meat and cheese board. They go with the territory. We included the mini arugula and red onions salad because red onions go with Limburger and Leberwurst and arugula seems to be a wildly popular green in Germany (based on our experience). And of course the rye bread. If we had to build a German style cheese and crackers platter, the crackers would be rye bread (like the German-style pumpernickel on our board). Farmer’s dark rye bread (a type or sourdough) is a classic, not to mention it has an incredible pairing affinity for German lagers.

Final words about this craft beer and food get togehter. In the US two popular Schwarzbier examples are New Belgium 1554 and Samuel Adams Black Lager. If you cannot find Schwarzbier style locally, the following styles are suitable to pair with a German meat and cheese platter. Most definitely Munich Dunkel, but also German or Czech pislners, Helles, and let’s not forget Oktoberfestbier or other amber lagers such as Vienna lager and Märzen/Oktoberfest style brews.