How to make eggnog with beer aka beer nog. 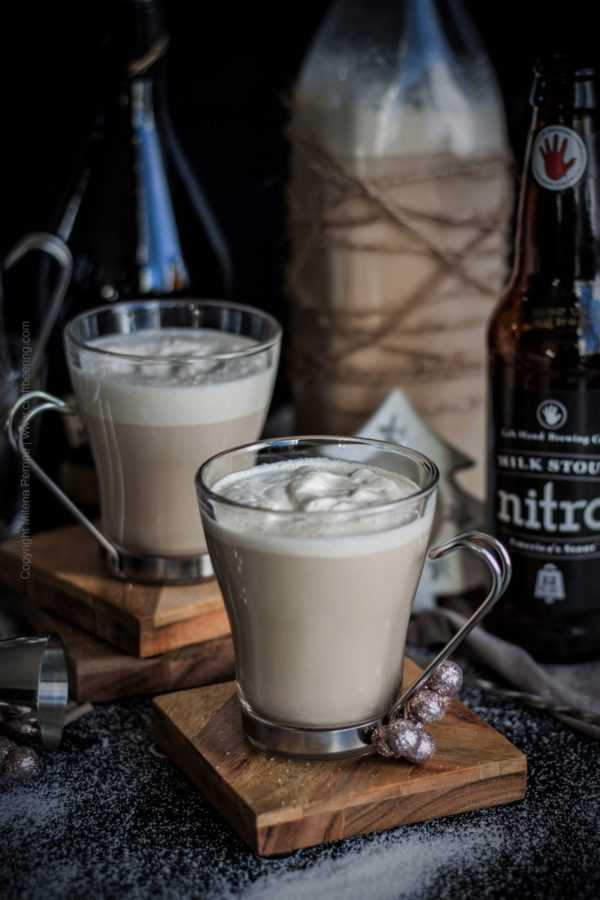 Beer nog aka eggnog made with ale is actually how the holiday drink that is so popular today originated.

Nog was popular in Norwich, a city in England, about four centuries ago. From The Glossary of Terms Used in East Anglia I pulled the following two definitions for you.

Nog used to mean ‘a sort of strong, heady ale’ and the term noggin was used to signify ‘a small measure or a pot of ale’. Sir Robert Walpole, the man considered the first effective prime minister of Great Britain was said to have passionately favored nog.

This takes care of the ale connection and sheds light on why beer comprises the origins of beer nog. 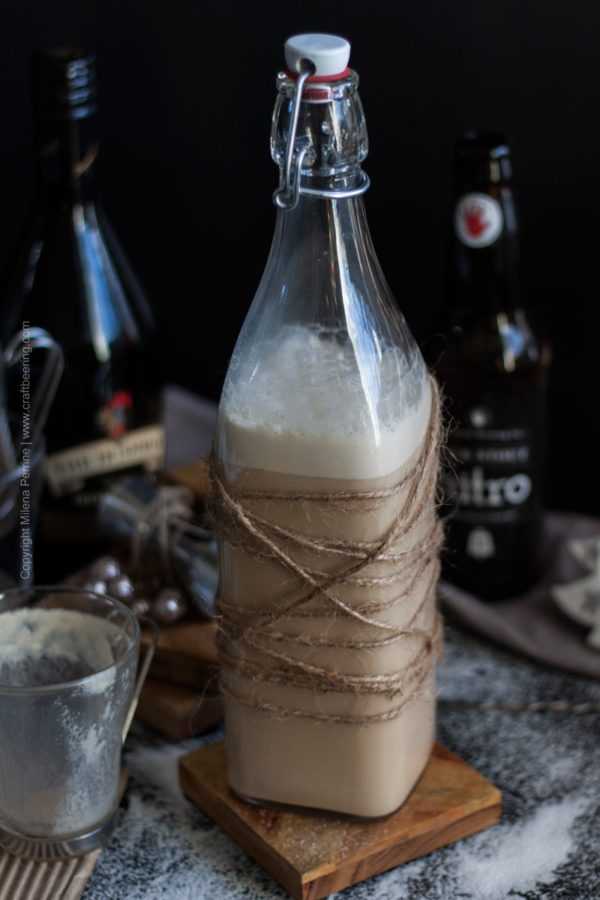 In addition to the strong, dark ale referred to as nog the wealthier English of the seventeen and eighteen hundreds used to indulge in a mixed drink called posset.

Posset was a spiced mixture of hot milk and ale or wine. Eggs were often added. The wealthy townspeople were the ones who primarily took pleasure in this milk punch because fresh milk and fresh eggs were not easy to come by in those days without refrigeration. Cows and chickens preferred to live in the countryside and the farms belonged to the affluent.

Making posset involved boiling some milk, adding either wine or ale, letting it cool and gathering the curds while discarding the whey before seasoning the concoction with ginger, cinnamon, candied anise and sweetening it with sugar. Not sure how I feel about a curdled milk cocktail.

Eventually room temperature nog (or often fortified wines like Madeira and Sherry) were added to posset. In the case of nog’s union with posset a popular craft beer cocktail was concocted! Sweet, strong ale and custard. No curds. Yum!

It probably was very similar to and looked much like this one below. 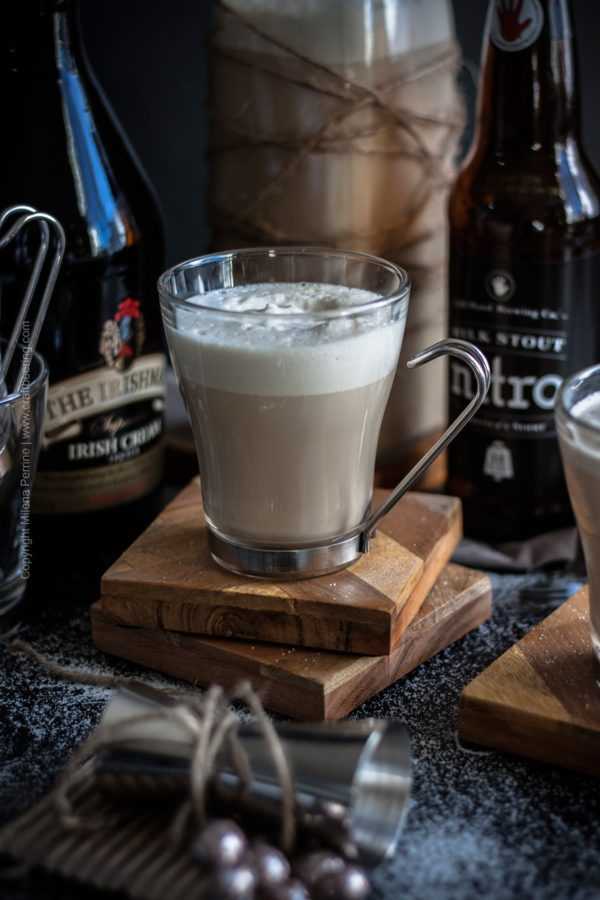 The early immigrants to America began adding rum and then bourbon to the milk custard cocktail, the ale element was overlooked and the concept of beer nog faded away. The name eggnog came into play, describing the drink as you know it today.

How to Make Beer Nog

Generally you will need:

But for the sake of flavor (and great flavor at that) – I present you with the Perrine Irish-ed version of the original eggnog.

We make it with nitro milk stout and a very generous quantity of Irish cream. 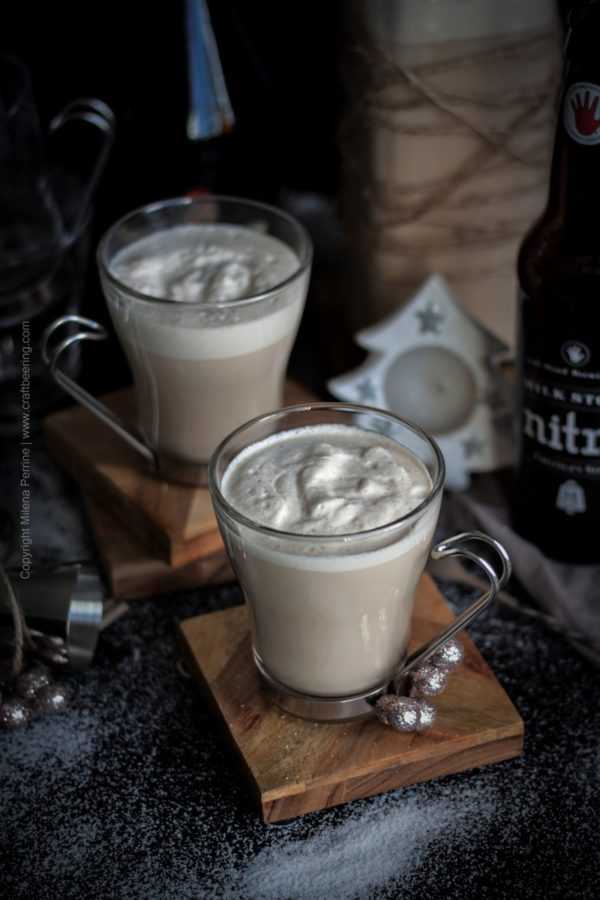 A creamy and sweet nitro milk stout is simply perfect for this beer cocktail. Carbonated with nitrogen for the tiniest of bubbles it is very, very smooth. The sweetness comes from the lactose added which is an unfermentable sugar and therefore remains to sweeten the brew.

Our usual selection is easily America’s most famous nitro ale with lactose – Milk Stout brewed by Lefthand Brewing Company, just thirty minutes down the road from where we live (but distributed nationally).

Milk Stout has unbelievably alluring notes of roasted malts and coffee and a velvety, smooth mouthfeel you will never forget once you try it. You must try it. Beats Guiness any time.

But if you cannot find it, use Guinness as a substitute (and fortify the Irish theme that doesn’t belong:) or use another nitro stout. 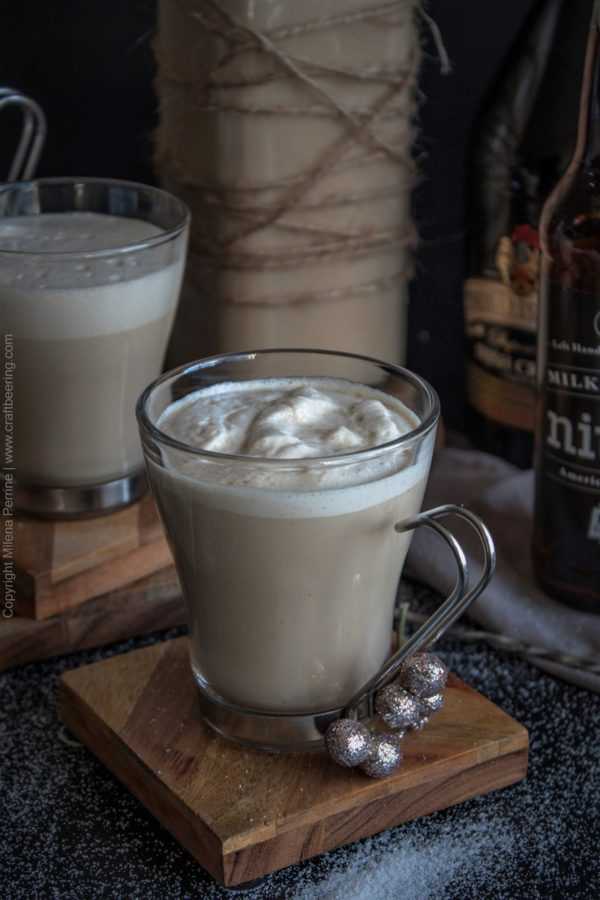 You will first need to mix the custard base of the beer nog by beating the eggs, dairy ingredients and the sugar. Flavor with vanilla and nutmeg and add the ale (nitro stout for best results) and the Irish cream.

Once you mix all the ingredients the resulting beer nog will have this lovely, silky, thick foam on top. Sooo good!

Only the first two or three cups you pour will get the delicious, frothy topping though… If you are serving beer nog to a few more people do act generously and redistribute the foam with a spoon before serving.

If you want the beer nog to taste even stronger (I am only suggesting this because I have heard of people mixing one part store bought eggnog with one part bourbon to = rocket fuel) you can always add a shot or two of Irish whiskey.

Just remember, that as it is, beer nog is already quite strong. The lack of alcohol burn is accompanied by a ridiculous degree of treachery. So watch out if you do add whiskey.

You can store the beer nog you prepare in a bottle or an airtight pitcher in your refrigerator for a few days.

There will be no more magic foam at the next pouring, but it will taste just as good.

That being said of course, since there are raw eggs, be careful. If upon taking the stout eggnog out of the refrigerator it smells strange or looks suspicious – you know what to do.

Discard the thing and mix a new batch.