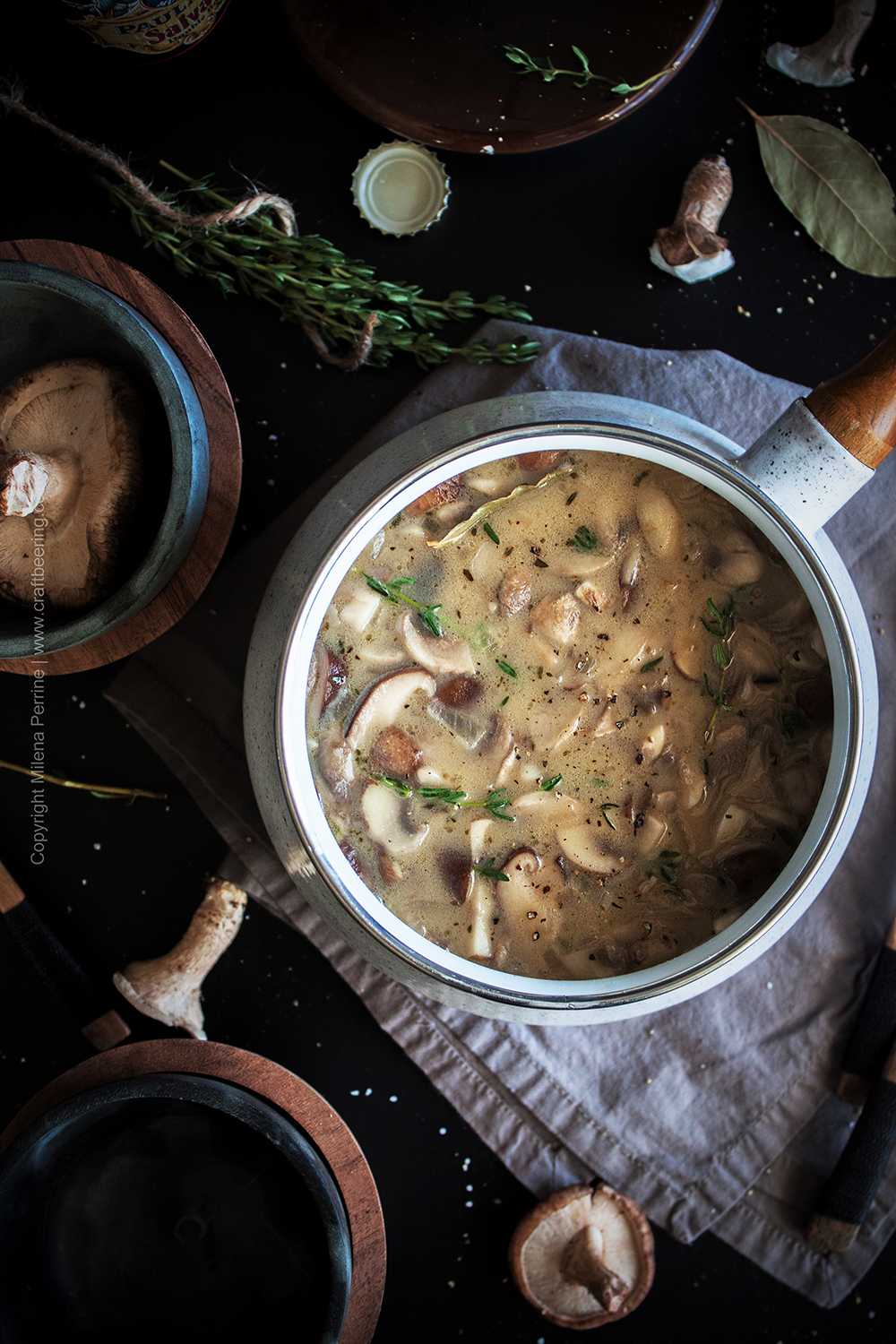 As promised sharing the recipe for Chris’ delicious creation in which the earthy flavors of shiitakes, baby bellas and white button mushrooms come together with the rich, malty character and toasty edge of Doppelbock.

Why choose Doppelbock to make this soup?

Few other beers can deliver the same intensity of flavor to accompany a mushroom trio as Doppelbock.

The strongest of the bock lagers, it is quite full bodied with a syrupy mouthfeel. Doppelbock has a very particular dark fruitiness to it (reminiscent of figs, prunes, ripe grapes/raisins) and a faint caramelized sugar presence.

The unobtrusive use of Noble hops balances the sweetness and imparts a hint of herbal notes but no bitterness. Notes of toasted bread and biscuit round off the dominant flavor profile earning the style a food friendly reputation.

We had a few Paulaner Doppelbock bottles at home and Chris used one of them to construct the broth for the creamy triple mushroom beer soup. Paulaner Brewery is in Munich, Germany, one of the six breweries permitted to brew Oktoberfestbier and serve it during Oktoberfest.

The Ingredients of this Creamy Triple Mushroom Soup

We make this Doppelbock beer soup with shiitake, baby Bella and white button mushrooms. Doppelbock lager has a rich, malty character and toasty edge and as a robust backdrop to its merits are butter, onions, double cream and a lot of thyme.

The cleaned baby Bella and white button mushrooms can be cut into pieced in their entirety.

The stems of the shiitakes must be removed and not used as they are extremely dense and become unpleasantly chewy. They could however be used for a home made mushroom broth/base to be added in the soup in lieu of the chicken stock Chris normally uses. If you are interested in creating homemade broths, we recommend this book. 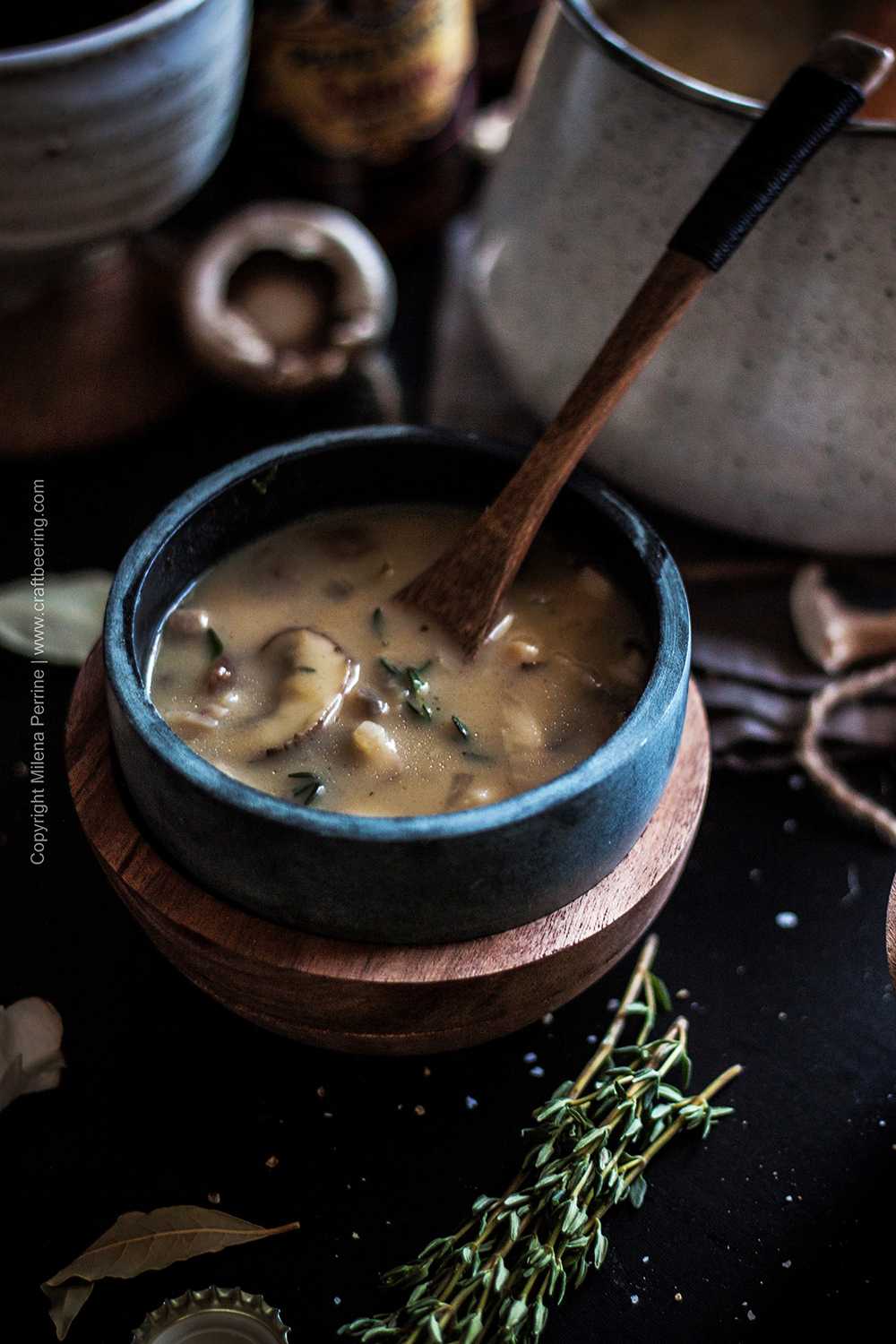 If you’d prefer a very intense umami, almost smoky mushroom flavor, you could soak a few small pieces of dried shiitake in hot water until fully reconstituted and then dice them really small. Their pungent nutty flavor also results in a sense of meatiness when they get added to dishes.

You can also use smoked salt instead of regular to enhance the flavor base.

Dried porcini mushrooms can work too, even though they will impart a less intense flavor than dried shiitakes.

We garnish the soup with fresh thyme and add a touch of freshly ground pepper just before serving.

A small bowl is all you really need to serve – it is so deeply satisfying. If you will be making the soup as the first course to a meal, be sure to have it followed by a meaty, hearty dish with loads of flavor. Something that will at least match its robustness, not pale in comparison with it.

Personally, I like to obtain satisfaction with a larger portion of the soup, then finish my meal with simple toasted bread and a strong, pungent and moldy cheese or a few slices of aged gouda or Camembert. And a small glass of Doppelbock. It is a delectable combination and makes for a complete dinner.

If you like the handmade Japanese wooden spoons in the pictures (they really add a rustic touch to the experience of enjoying this soup) you can find them here.

Besides this beer soup, a recipe where Doppelbock and mushrooms have a remarkable interaction resulting in immense pleasure for the taste buds is our Chicken Beersala. A must try!