German fries or Bratkartoffeln are pan fried potatoes with onions, bacon and fresh herbs as garnish. Here is how to make them. 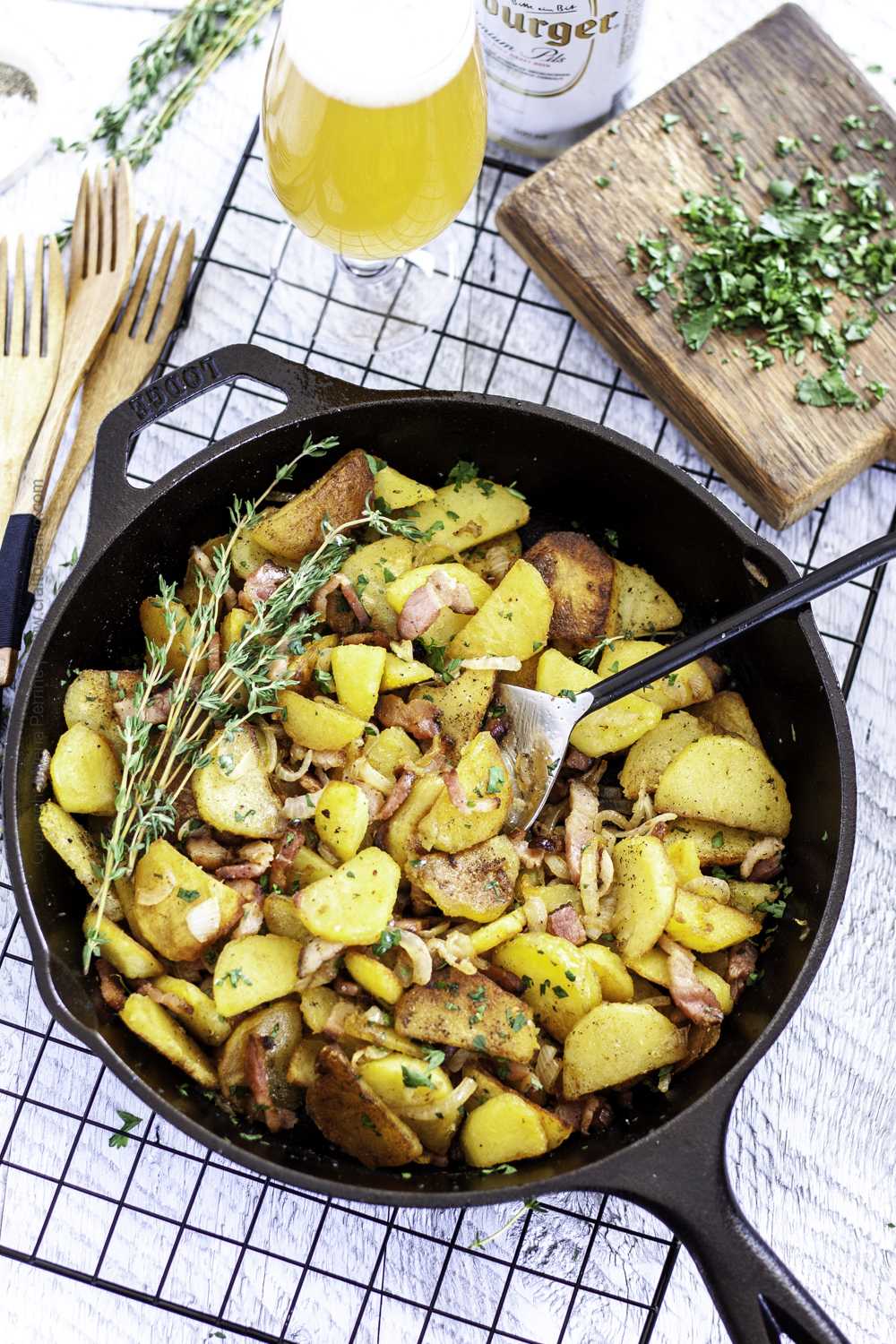 Go directly to the Recipe Card or
Read on for relevant information, tips and step-by-step pictures (2 mins).

Bratkartoffeln are just like cottage potatoes and are wildly popular throughout Germany for all the right reasons. Similarly to German potato pancakes they are an incredibly delicious appetizer and also double as a side to Schweinshaxe, Schnitzel, Braised Lamb Shanks, Brathendl (roast chicken) and many other main dishes. 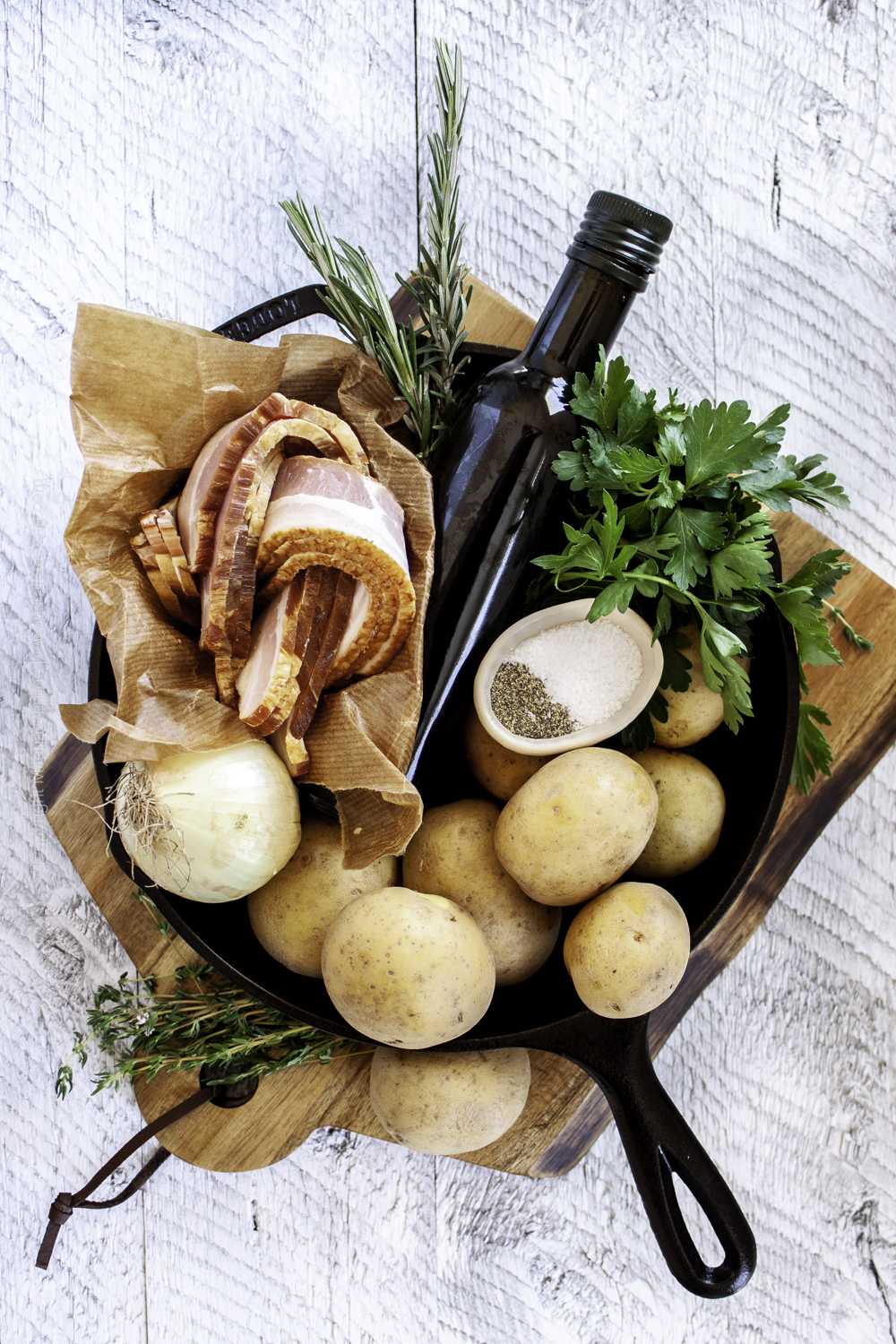 TIP: If you choose to skip the boiling step, be sure to cut your potatoes smaller than seen in the pictures (a larger dice would be perfect) and expect to pan fry them longer. 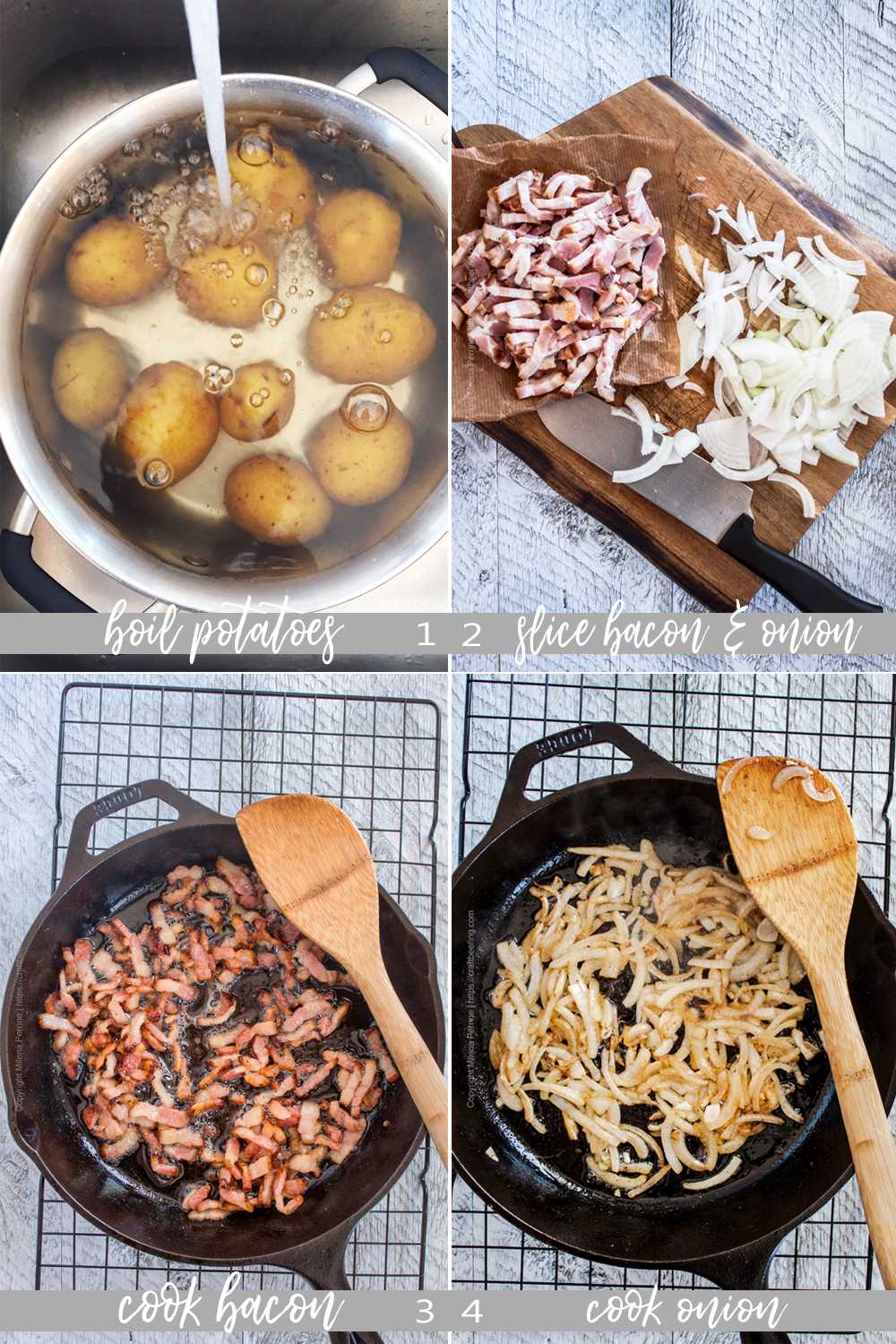 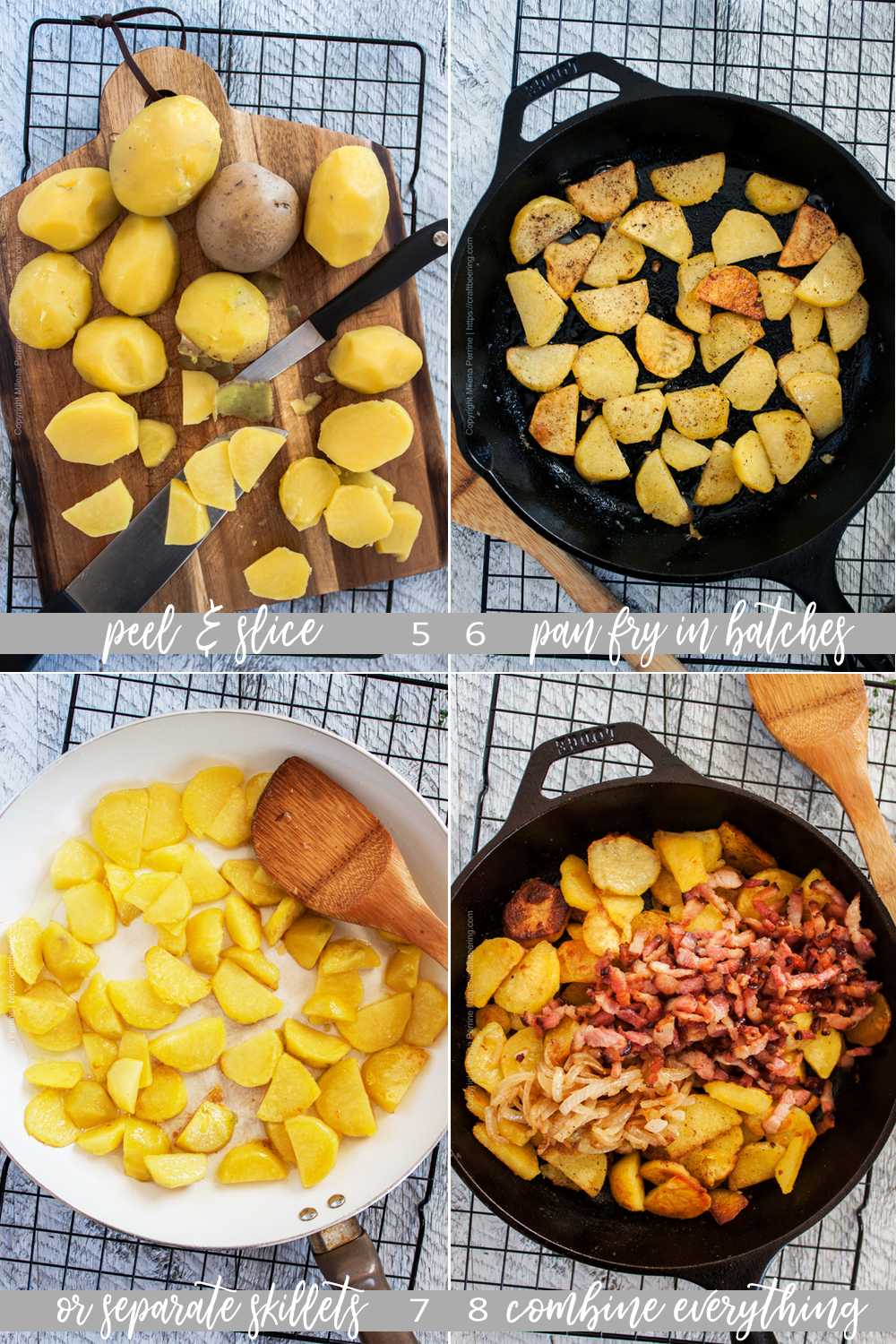 Here is how to organize your work flow for a seamless experience.

Step 1. Wash the whole potatoes (do not peel them) and put them in salted water to boil while you turn your attention to the bacon and onions.

Step 2. Dice or cut the bacon in small strips and thinly slice the onion. Cook the bacon until crispy and the fat is rendered. Transfer to a paper towel lined plate to drain. In the bacon fat cook the sliced onions until they just begin to get crispy. Remove them to another plate and save the skillet.

Step 3. While you are pan frying the onions the potatoes should be done boiling. Do not let them overcook and become too soft. As soon as they are soft enough when pierced with a fork but still somewhat firm remove them from the heat, pour out the hot water and run cold water over them.

Once the potatoes are comfortable to the touch, peel the skins (not mandatory, especially is using red or new potatoes) and cut them in full or semi-circles or any shape they turn out really – this is a rustic looking dish. If you want to – dice them. Chris and I have had our fair share of Bratkartoffeln during our travels and have enjoyed them cut in all sorts of ways.

Step 4. Proceed to pan fry the cut potatoes, in two batches, with about a tablespoon of cooking oil per batch. Be sure not to overcrowd the skillet so they can get crispy. Once they begin to brown on one side start to turn them over.

TIP: Instead of working in batches you can save time and use a spillover skillet on an adjacent burner and once all the potatoes are nicely browned combine them in a single skillet.

Step 5. Finally add the bacon and onions, carefully fold them into the fried potatoes, season with salt and pepper, garnish with fresh herbs and serve! 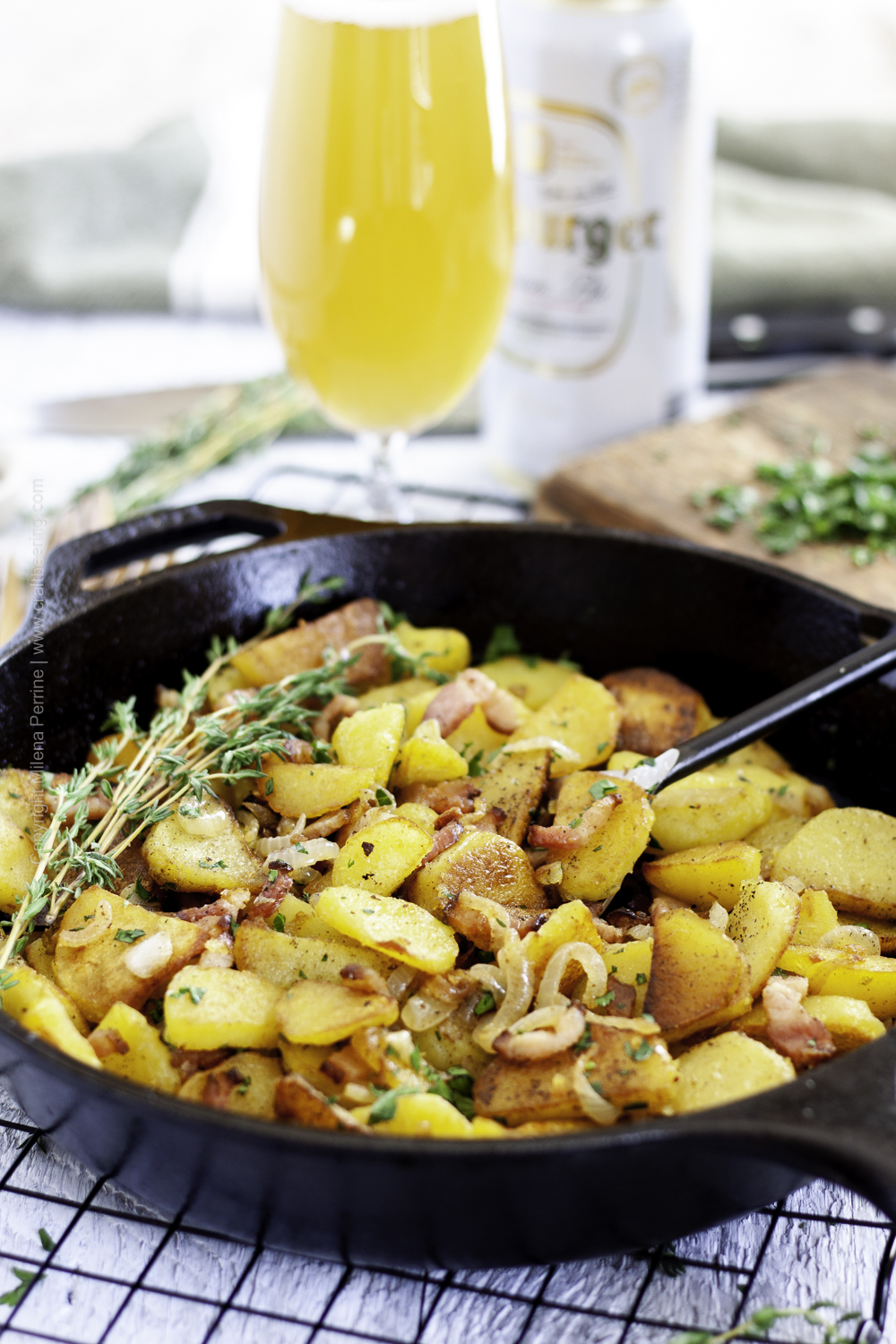 The herbal notes and spicy bite of cold, crisp German pilsners are unmatched when it comes to pairing with Bratkartoffeln.

Chris and I often enjoy this dish with Dunkel lager – we prefer the Franconian style for its notable dryness. Other well suited dark styles are Schwarzbier, Altbier and in winter – bocks.

When in season consider Oktoberfest lagers. Both the modern, lighter ones and the more traditional, deeper colored and boozier versions.

A very interesting pairing results with Rauchbier – its intense smokiness is so well received by the potatoes and the smoked bacon bits that even those normally opposed to the style could find the combination delightful.

Craving more German food? Take a look at this comprehensive list of German Appetizers Recipes or these German Potatoes Recipes.

*Paprika is also traditionally used to season Bratkartoffeln so if you like it, include it with the salt and pepper.

**Smaller sized potatoes will soften faster than larger ones so keep an eye on them to make sure you do not overcook them and let them get too soft.

***To speed things up you may want to use a second skillet and pan fry the two batches of potatoes simultaneously.