Mix your own summer shandy any time of the year. No need to wait for the annual release of pre-mixed commercially sold versions. 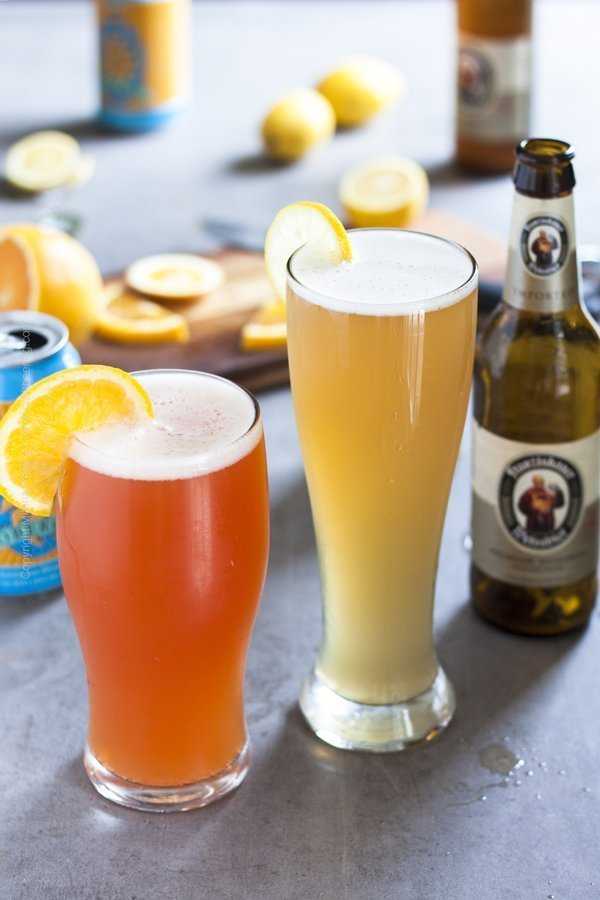 What is a Summer Shandy?

A summer shandy is a beer mixed drink –  a blend of wheat ale and sparkling lemonade in a 1:1 ratio.

Variants of summer shandy include other popular wheat beer styles and citrus sodas.

How to Mix a Summer Shandy 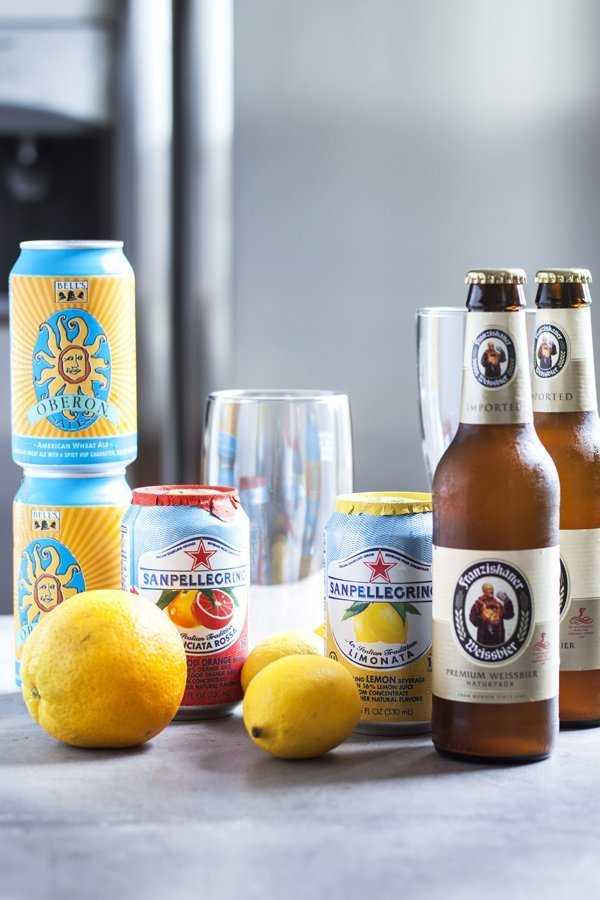 Wheat beer. The classic style of wheat beer for a summer shandy is Bavarian weissbier (Hefeweizen) with its bold fruity yeast esters reminiscent of banana, clove and citrus. American wheat and Belgian witbier are also a great choices. They are fermented by different types of yeast and the resulting beers showcase a bit different aromas and flavor – clean, citrusy and slightly tart for American wheats and orange, coriander and spice for Belgian wits.

Using ice cubes is not traditional, instead both ice cold ale and soda are called for, but if you must use ice then add the cubes after you’ve mixed the drink and keep them to a minimum.

Both of the summer shandy versions we show below taste delightful and employ the same steps, just using different beer styles, soda flavors and garnish as their ingredients.

Step 1. Fill a glass halfway with weissbier and wait for the fine, lush, pure white foam to (mostly*) dissipate.

Step 2. Top with lemon soda and garnish with a lemon slice.

*Note: Weissbier has thick and long lasting foam. You can always top off the glass with more wheat beer or soda once all the foam has settled.

This version can be mixed with either American wheat ale or Belgian witbier. We selected Bell’s Brewery Oberon Ale which has a mild citrus character. We also used blood orange soda as it has a touch of bitterness over regular orange soda and its color is gorgeous.

Step 1. Fill a glass halfway with wheat ale and let the foam settle a bit.

As the foam settles even further top with either extra beer or soda. 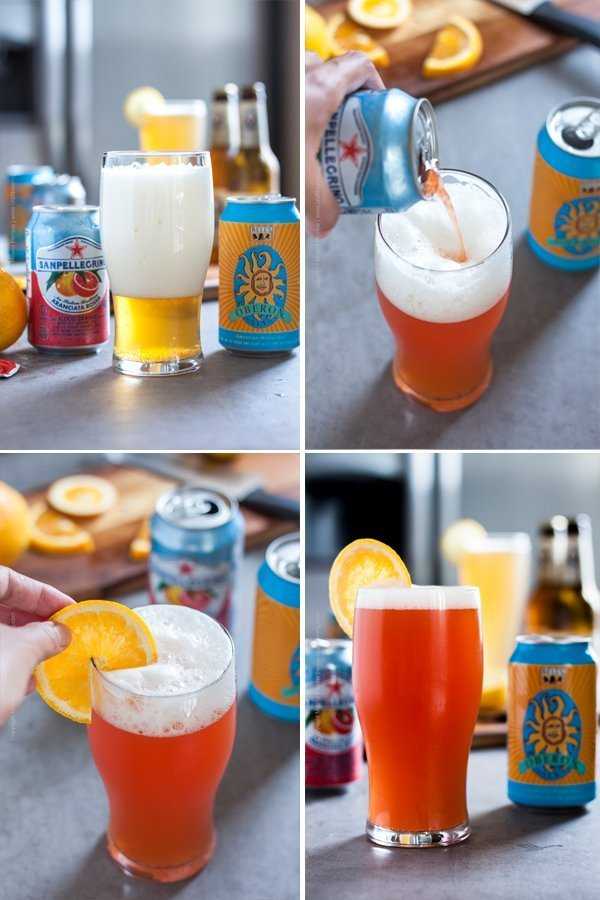 Generally wheat ales have relatively low ABV (alcohol by volume) – in the vicinity of 5%. When you mix them with alcohol free soda the resulting summer shandy drink has ABV around 2.5 %, assuming a 1:1 ratio. The perfect refreshing light alcohol sipper.

You can tweak the ABV by altering the proportion of wheat ale to soda – higher if you use more ale and lower if you skew it to the soda side.

Alternatively, if you were to use hard lemonade and wheat ale you’d get the same coveted flavor medley and up the alcohol. Even though the point of summer shandies is to be enjoyed as a low alcohol day-drinking beverage there are always situations when you might feel compelled to do the opposite.

Or you can always add a shot of your favorite hard liquor to a summer shandy – vodka, tequila or bourbon are perfect.

How Sweet Should a Shandy Be?

Some like theirs really sweet, others (ourselves included) less so.

The best summer shandy is the one you mixed exactly to your liking.

The best way to find out what you like most is to experiment with several different wheat ales and several different brands of soda. Wheat ales are generally not bitter, sparingly hopped and with low alpha-acid hops. Hence controlling the sweetness is really about choosing a sweeter or less so brand of soda and manipulating the proportion of soda you use.

Of course there are quite a few summer shandy beers on the market which are seasonally produced to satisfy peak demand – from May to about early September. They are usually made by adding lemonade/other citrus fruit flavor to wheat beer and typically classified as fruit wheat beer. Their ABV is around 4% and they tend to be on the sweet side.

Yet if you live in a warmer climate you might want to enjoy a shandy in November or February. As former Florida residents we are quite familiar with the situation and always appreciated being able to mix our own summer shandy and control the sweetness.

Summer shandies are also perfect as an accompaniment to a snowy weekend brunch. Nothing like enjoying beer for breakfast and some virtual sunshine and summer vibes during those cold months.

Be sure that both the wheat beer and the sparkling lemonade are very well chilled. Ice is typically not used in a shandy.

While the typical ratio between wheat beer and soda is 1:1 you can vary the proportions of the blend to pin point the flavor you enjoy the most.

Nutritional information is based on 1:1 blend of Bell's Oberon wheat ale and San Pellegrino Arranciata Rossa (blood orange soda). The soda has about 2 times more calories and sugar than the wheat beer. Going with higher ratio of beer relative to the soda will lower the overall calories.