Your options for creating the perfectly flavored beer chocolate fondue are seemingly endless, mostly due to the massive creativity of today’s craft brewers. You can tweak our simple base recipe in any way you want – use different beer styles, different chocolate varieties and configurations of both. If you love craft beer and are a fan of chocolate you might want to master the art of the beer chocolate fondue:) 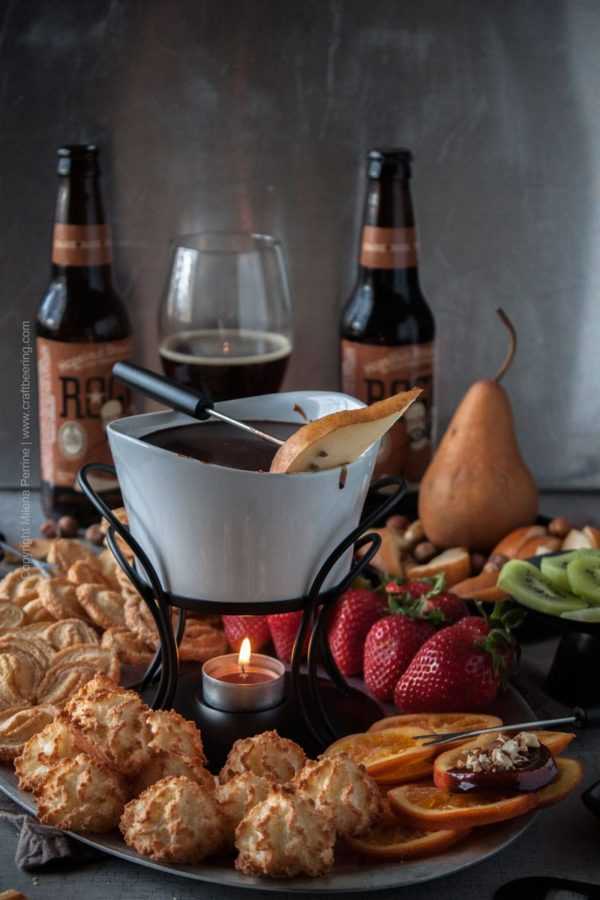 How to Make Beer Chocolate Fondue

All you have to do is use the beer of your choice (aided by some butter) as the melting agent for the chocolate.

You’ll warm the beer and butter in a small sauce pan, bring them to a gentle simmer, remove them from the heat and then gradually stir in the chocolate.

Heating up the beer will get rid of some of its alcohol content. This can be considered a plus if you chose a style with high ABV (very likely for many of the sweeter beers that make good candidates for this recipe) and do not want to taste too much alcohol warmth in your fondue. The butter will add a richness to the fondue and make it extra silky. 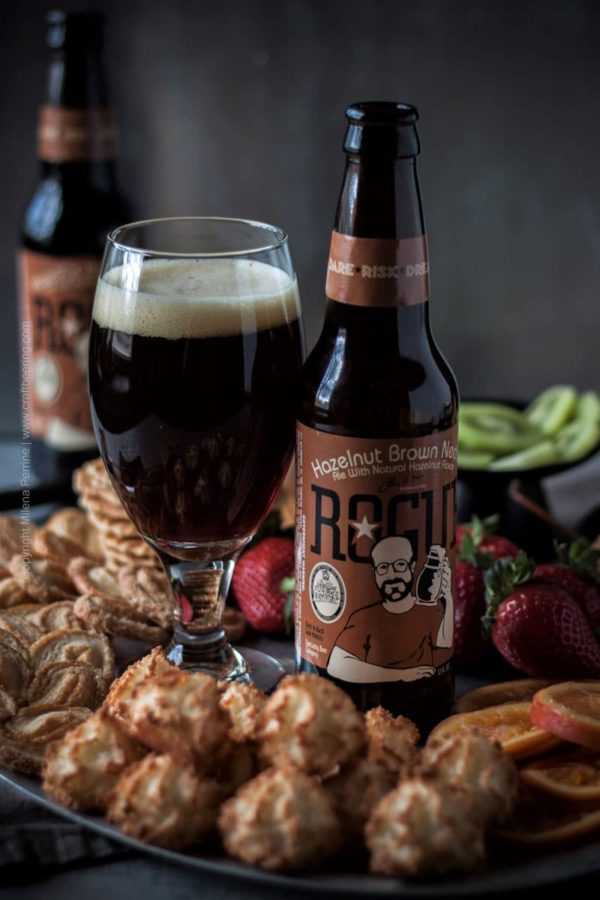 The short answer is – brews (across styles) that are skewed to the malty side of the equation, with malts in the grain bill that contribute chocolate, espresso, sweet toast and caramel flavors.

Generally, you’d want to avoid anything with a pronounced hops presences that will introduce bitterness. So while a dry Irish stout with its bold hoppy character may not impress you, a creamy, sweet milk stout might make you fall in love with your fondue creation.

Consider the following styles when selecting a brew for beer chocolate fondue:

(…That blackberry Altbier aged in bourbon oak Chris made a while back would have been great in a chocolate fondue just as it was in the Sweet Hawaiian Rolls French Toast Bake I made with it.)

Chris loves browns in general, whether balanced, on the hoppy side or overwhelmingly malty. I seem to gravitate towards the sweeter ones when using them in a recipe (for example this Beer Peanut Brittle) and hoppier ones when I drink them. We used the Hazelnut Brown Nectar you see above, brewed by Rogue Ales & Spirits, an independent brewery in Oregon. It is a full bodied, sweet brown ale with chocolate and toasted hazelnut flavors and notable vanilla and cream presence. A really good example of a sweeter brown ale with an ABV 5.6%. 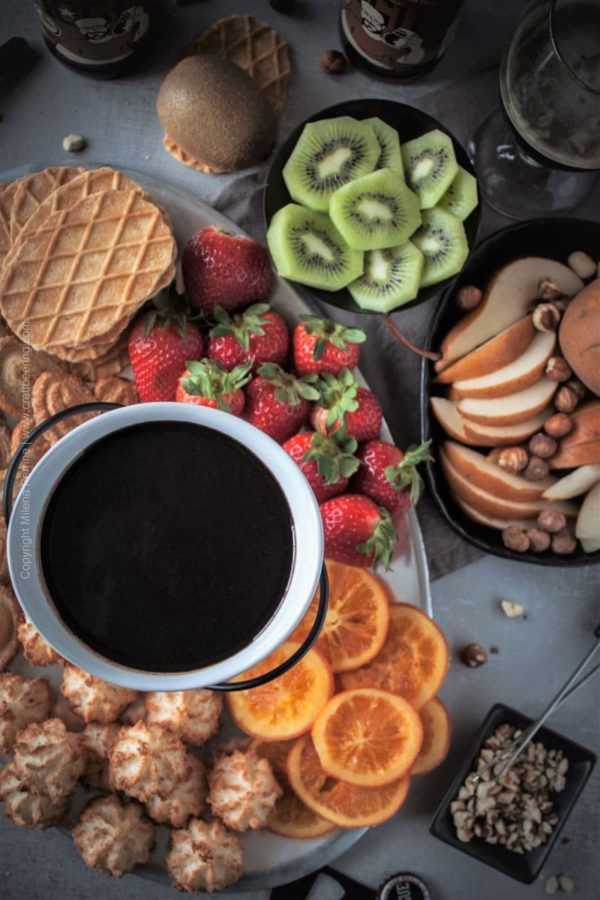 What to Dip in Chocolate Fondue with Ale?

You can get creative here, especially in view of the beer style and flavor and the type of chocolate you used in the fondue.

Since we had the wonderful toasted hazelnut flavor in our sweet brown ale and we used a combination of milk chocolate and semi-sweet chocolate chips, we included crushed, freshly toasted hazelnuts to use as a crunchy topping over the accompaniments. We bought raw hazelnuts from Oregon (the best!) at Trader Joe’s (gotta love this store, I always say that) and chopped them right before pan toasting them. The smell of those alone was beyond enticing. 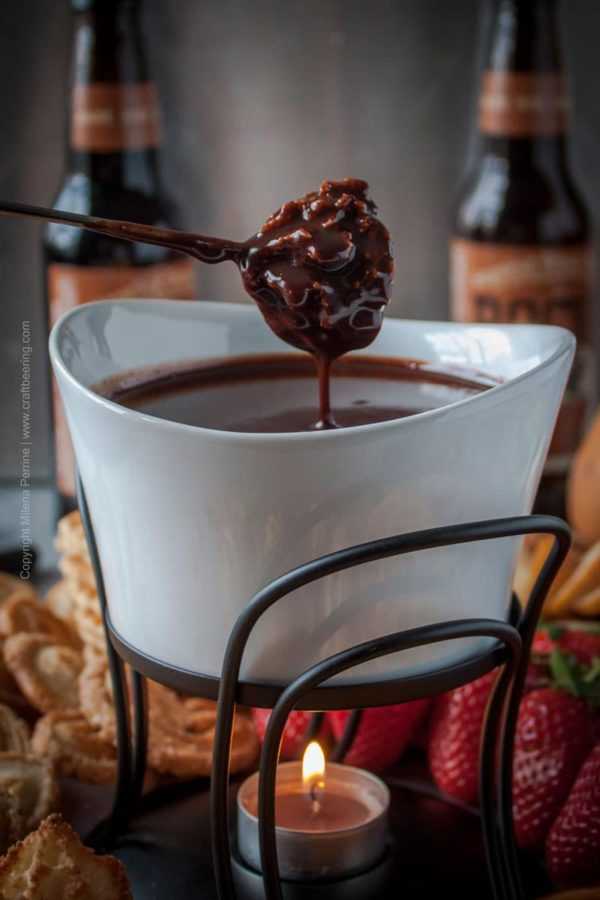 Traditionally, people seem to go for apple slices, banana slices, pineapple and pound cake, and of course strawberries – the most popular choice by far.

But I urge you to think what might pair best with the flavors of your beer fondue. If you used a coffee porter and semi-sweet or dark chocolate, wouldn’t it be great to be able to dip some biscotti in it? Or bruleed pears? Or perhaps some macaroons? Roasted grapes? 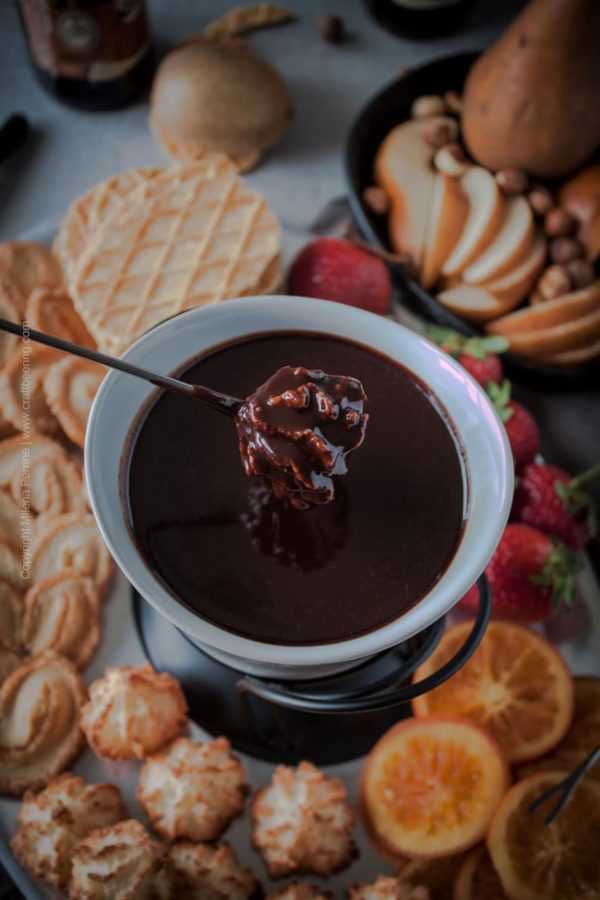 Macaroons are actually great with most beer chocolate fondues I’ve tasted. We included them in the assortment for this post and added:

Note: This recipe yields just over 16 oz of fondue, so choose a smaller pot. 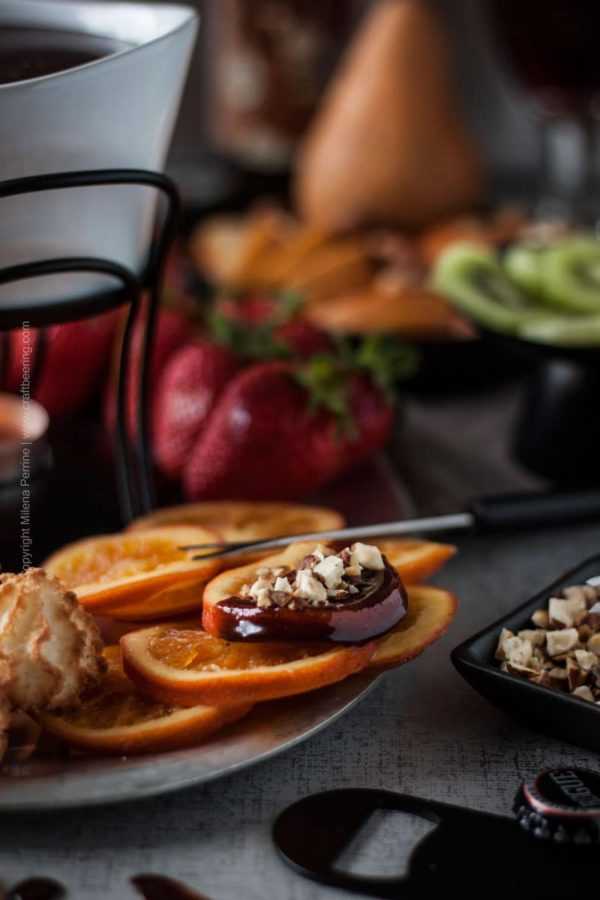 Other Recipes Where Craft Beer and Chocolate Work Their Magic

Beer chocolate fondue is not our only vice:) Even though we are not world’s biggest consumers of chocolate, once in a while we love to make a beer chocolate dessert. Check out these easy recipes where the flavors of chocolate are elevated by subtle craft beer interventions. And stay tuned for Chris’ famous (even if only to a few people) raspberry stout chocolate souffles. They are insanely good.