Craft Beering » Cooking Tips and How Tos » The Art of Braising 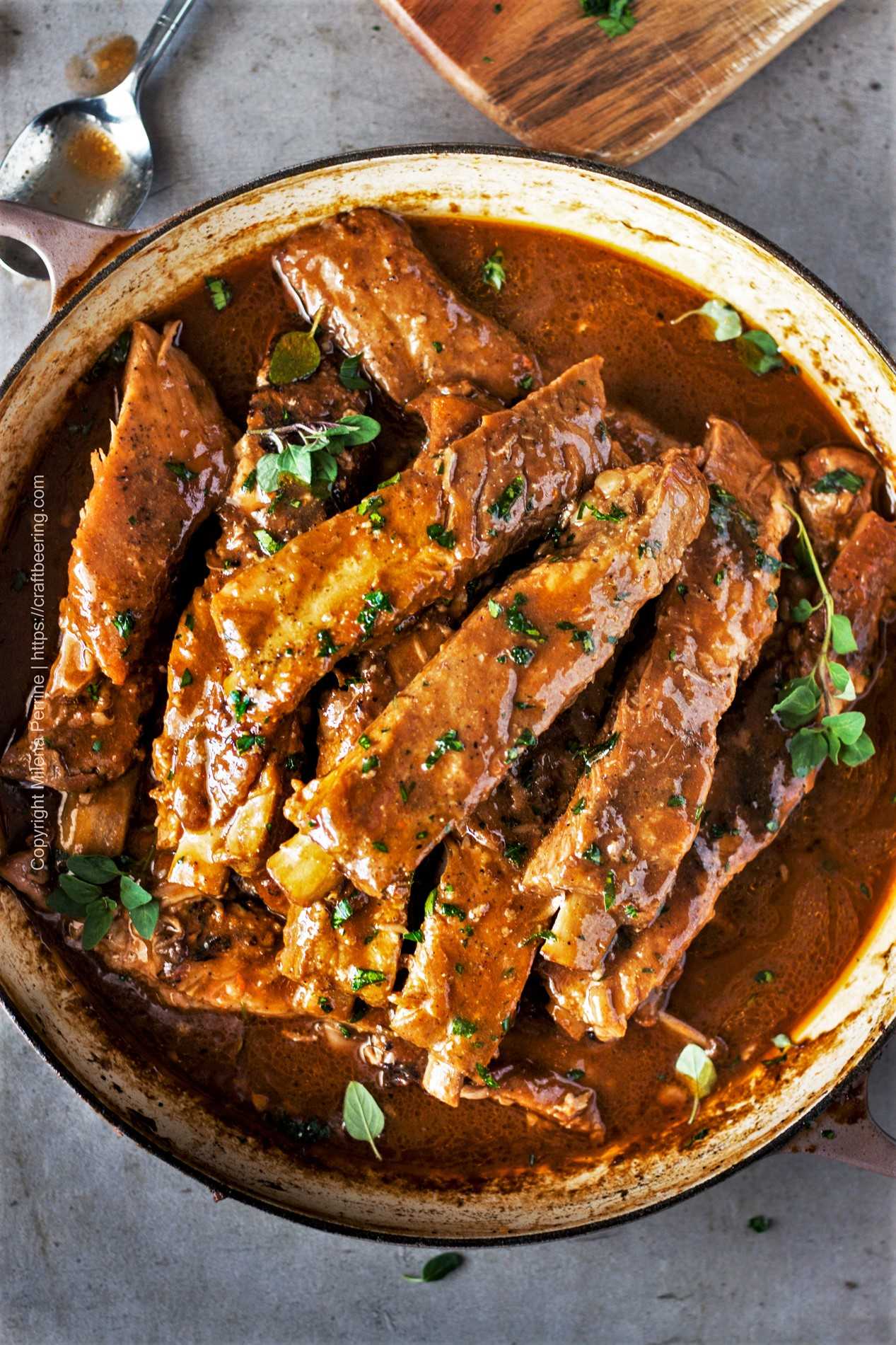 What is Braising? A definition of the classic cooking method

Braising is slowly and gently cooking meat or other foods in a relatively small amount of liquid.

There are multiple approaches to the technique, depending on the type of food and exactly how it is handled.

The overwhelming majority of braises undergo a browning stage, where essential flavor compounds are created through searing the food (Maillard reaction), but this step is not always required (detailed section below). To that extent braising is not always a combination cooking method.

The principal advantages of braising are:

As an official technique with defined parameters braising originated in France, even though it has been an essential cooking method of multiple international cuisines for centuries. The French word braisière means a braising pan, a vessel for braising meats and not surprisingly famous French cookware makers Le Creuset and Staub both sell several versions of a braiser, a larger, deep enameled cast iron pan with a tight fitting lid.

At home you can use various other cookware for braising – pots, pans, Dutch ovens, casserole dishes, slow cookers etc. If braising for larger parties you can even use roasting pans and foil in lieu of a lid. For example in a busy, high volume restaurant kitchen Chris uses either large, deep, heavy duty roasting pans, tightly covered with two layers of foil to create a seal or commercial braisers, especially built to handle the job.

The French have another word that they like to use in conjunction with braising – mijoter. It means to simmer or to cook something slowly. Furthermore, as many classic French cooking books will inform you, the simmering is to performed on the stove, with the lid on. This of course does not limit the braising options and the oven seems to be the dominant choice today.

NOTE: Many recipes for braising meat you will encounter advise that the braising liquid be brought to boil first, then allowed to temper down to just below a simmer with a lowering of the temperature. This is being advised due to food safety concerns as most bacteria likely to be found on the surface of meat die during boiling. Classic recipes advise that the braising liquid is directly brought to a gentle simmer.

Beyond the Main Ingredients – Composing The Braising Liquid

Braising’s reliance on gentle cooking via steady, moist heat underscores the importance of composing as flavorful cooking liquid as possible. To that end the use of certain flavor enriching ingredients is heavily relied upon. These include:

The difference between a stew and a braise is in the size of the cooking ingredients and amount of braising liquid used. In a stew the meat, fish or vegetables are cut into smaller pieces and cooked in a bit more liquid than a typical braise.

The term pot-roasting is frequently used to describe braising in a covered pot, but also to describe a number of other cooking methods. On that account it is somewhat confusing because the techniques in question can be in conflict with each other.

Possibly the most accurate use of pot-roasting is when it is applied to the poeler cooking method (from French poêler). It is used with poultry, fish or meats with the skin on. Essentially the poeler cooking method is ‘roasting’ in a covered pot with butter or other fat, then removing the lid, increasing the heat and allowing the skin to brown and become crispy in the oven.

If liquid is added, the poeler technique becomes closer to braising, which is why pot-roasting is so confusingly used to describe either method.

The following tips will help you master braising as they address important aspects of the process.

What to Do With Leftover Braising Liquid

Braising liquids are a precious flavor bomb you can exploit to create more deliciousness. You can use leftover braising liquid for any of the following:

TIP: Save extra braising liquid and use it one way or another.

Watch This Demonstration of Braising 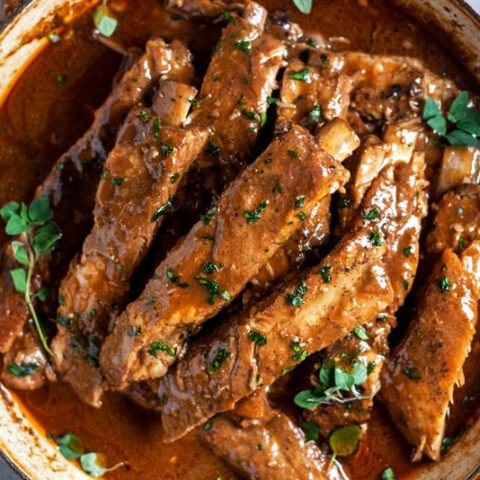 Perfectly tender spare pork ribs braised in a flavorful liquid boosted by the roasty, malty notes of dark beer. The liquid is then transformed into a delicious gravy like sauce to serve with the spare ribs for a true comfort food dish. 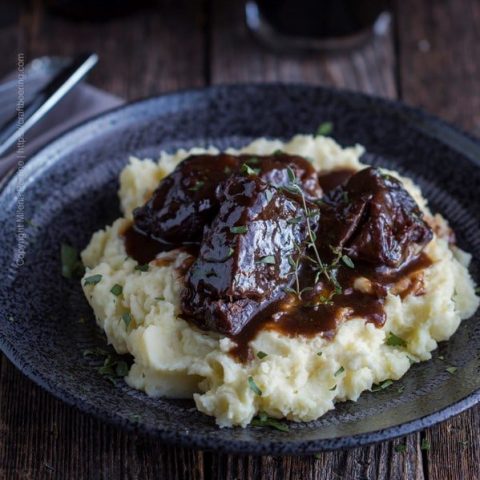 Succulent beef short ribs braised in a rich and flavorful liquid with roasty, malty undertones from dark ale. When done, the beer based braising liquid is converted into a decadent, luscious gravy. 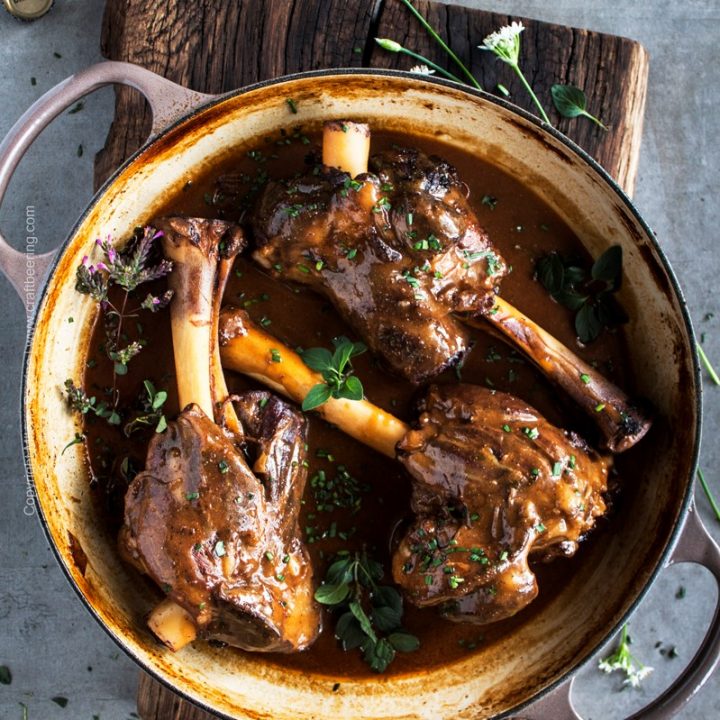 Slowly cooked lamb shanks are braised in a delicious beer infused liquid until fall-off the bone tender. The braising liquid is then transformed into a silky, scrumptious gravy-like sauce. Oven method with a crock pot variation. 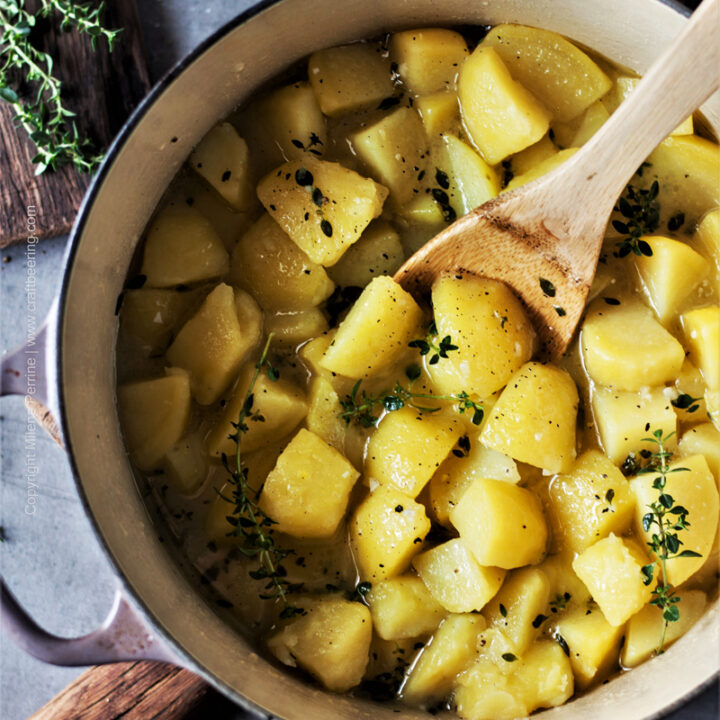 Braised pork loin chops in sweet Belgian beer (or apple cider) and onions. Consider adding dried figs to the braising liquid to impart deeper sweetness. The flavors are rounded off in the end by adding some vinegar or mustard or both, just after the sauce is thickened with a slurry. 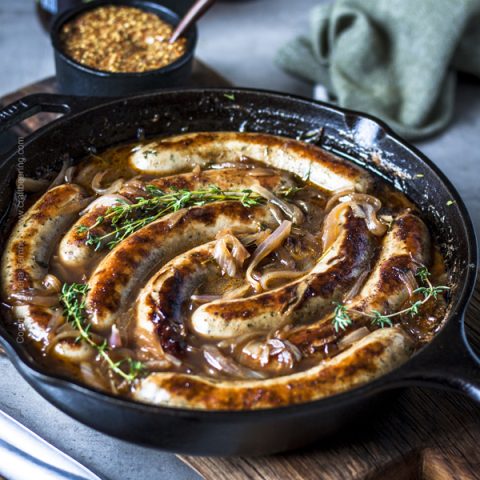 Skillet braised beer brats simmered in a malty sauce with soft onions and thyme. Serve on a hoagie roll topped with the onions or over mashed potatoes, smothered in the beer sauce. 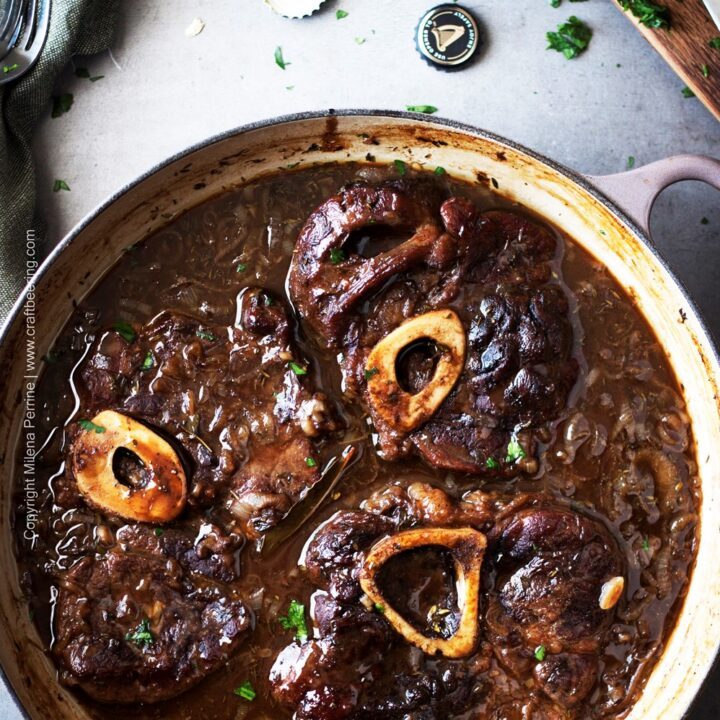 Traditional Irish recipe for beef in beer using Guinness and cross cut beef shanks of chuck short ribs. Braise the beef osso buco style or cut it in cubes before searing - your choice. 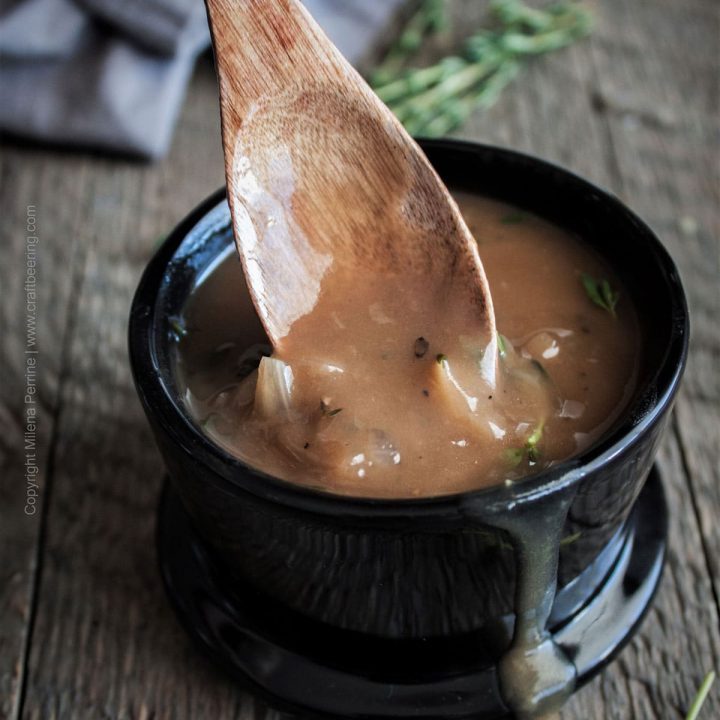 Beer onion gravy is a staple complementary to a number of dishes. Bangers and mash, Yorkshire puddings, grilled chicken, pork chops or portabello mushrooms, even steamed rice welcome its sweet and savory goodness. 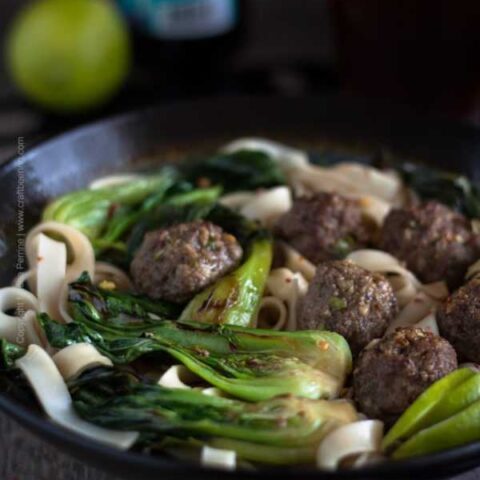 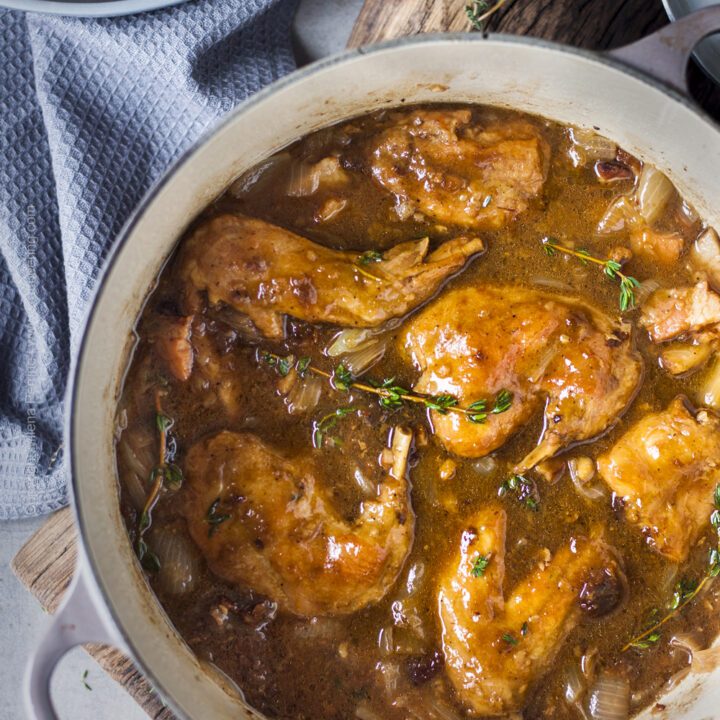 Delicious, hearty rabbit stew with a medley of bold flavors and tender meat. Serves up to four depending on the size of the whole rabbit. 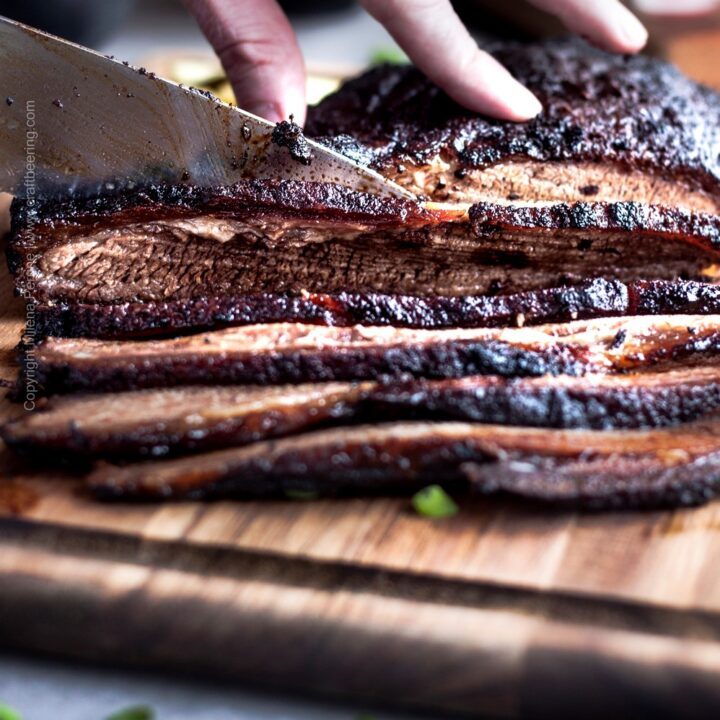 How to make tender beer brisket in the oven or slow cooker. Tips on the most suitable beer styles to create a barbecue flavored braising liquid and a dramatic looking bark. Ideally use flat brisket and season the beef well in advance, then refrigerate. 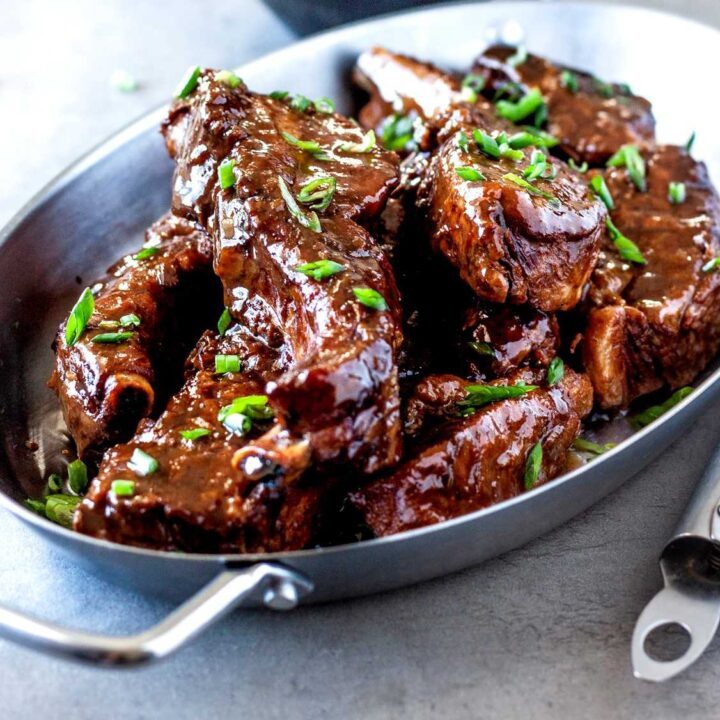 Beer braised country-style pork ribs with delicious sauce made from the braising liquid. You can prepare them on the stove-top, or start them on the stove top and finish them in the oven or a slow cooker. 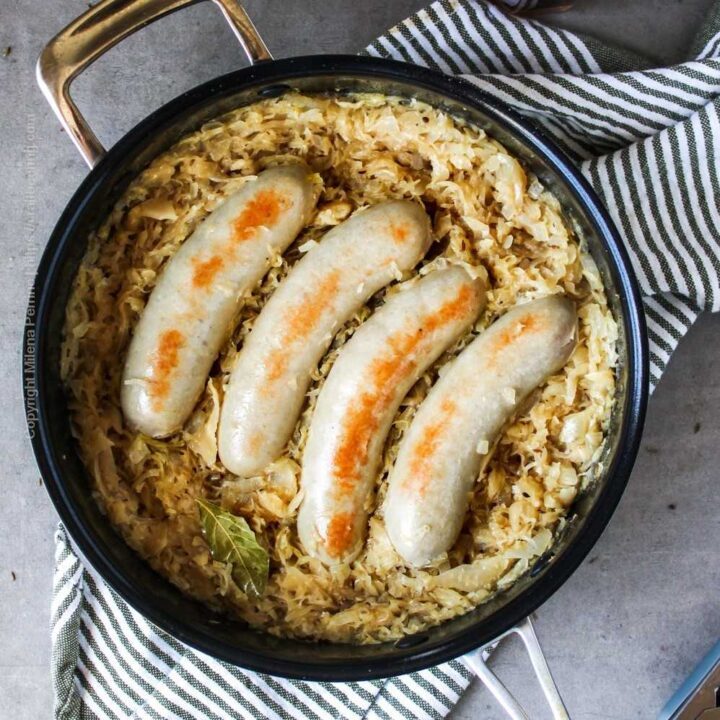 Bavarian style beer bratwurst and sauerkraut. The sauerkraut is braised in a flavorful braising liquid with the bratwurst nestled on top.