Easy boiled potatoes tossed in butter and flavored with parsley. Known as Petersilienkartoffeln this classic German side dish is traditional for many meat, poultry and fish mains. 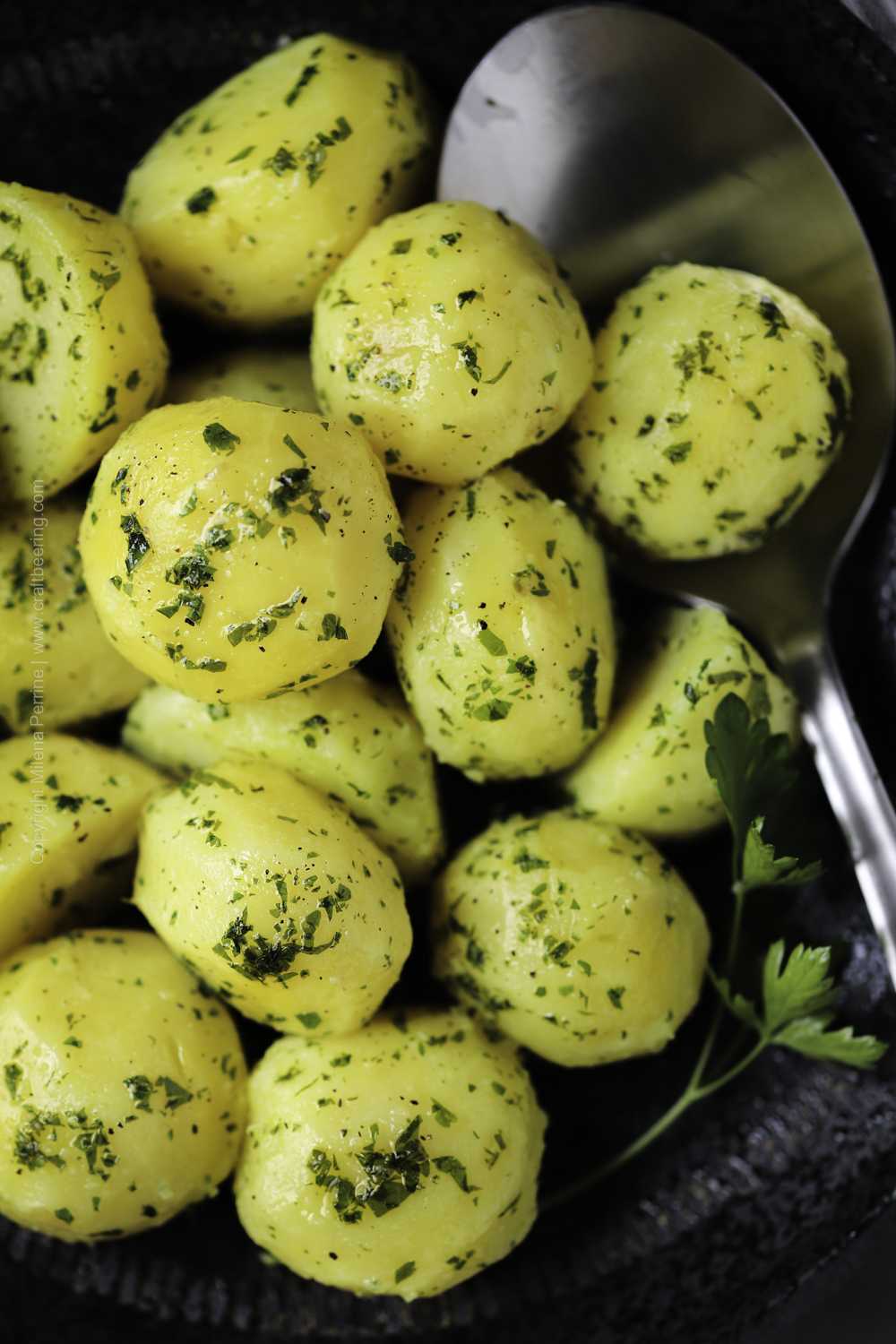 About These  Boiled Potatoes with Butter & Parsley

This is an incredibly simple recipe. It all comes down to boiling peeled potatoes and once they are done tossing them in melted butter dotted with freshly chopped parsley and seasoning them. The style of preparation is ubiquitos across Germany and the side is commonly served alongside Schnitzel, boneless pork shoulder roast, roasted pork knuckle, pan seared salmon or trout and even Matjes herring fillets.

The most important consideration you have is the type of potato to use. German potatoes offer multiple options in terms of varieties and for Petersilienkartoffel (Parslied potatoes) typically a yellow festkochend (waxy) sort is used. In the US opt for Yukon gold or one of the alternatives suggested below. 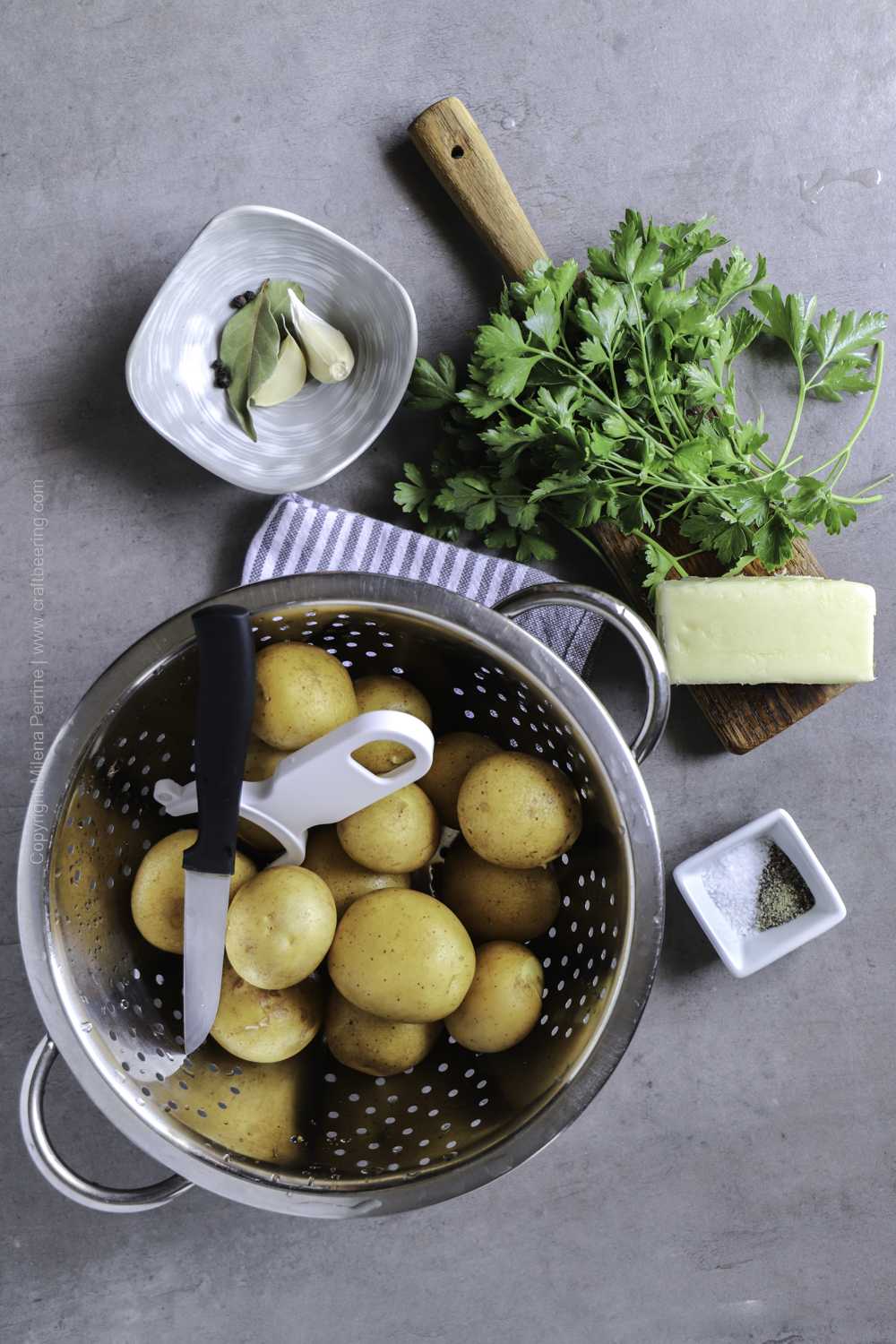 How Long Does It Take to Boil Potatoes?

It all depends on the exact variety and the size. The time could vary from 10 minutes to 20 minutes or so. Simply test with a fork to detemine doneness – it should slide into the potato easily.

NOTE: Do not boil the potatoes to the point where they become mushy. If when you check them it looks like they are leaning to the overdone side stop the cooking process by immediately taking them out of the hot water and placing them in an ice water bath to cool down. 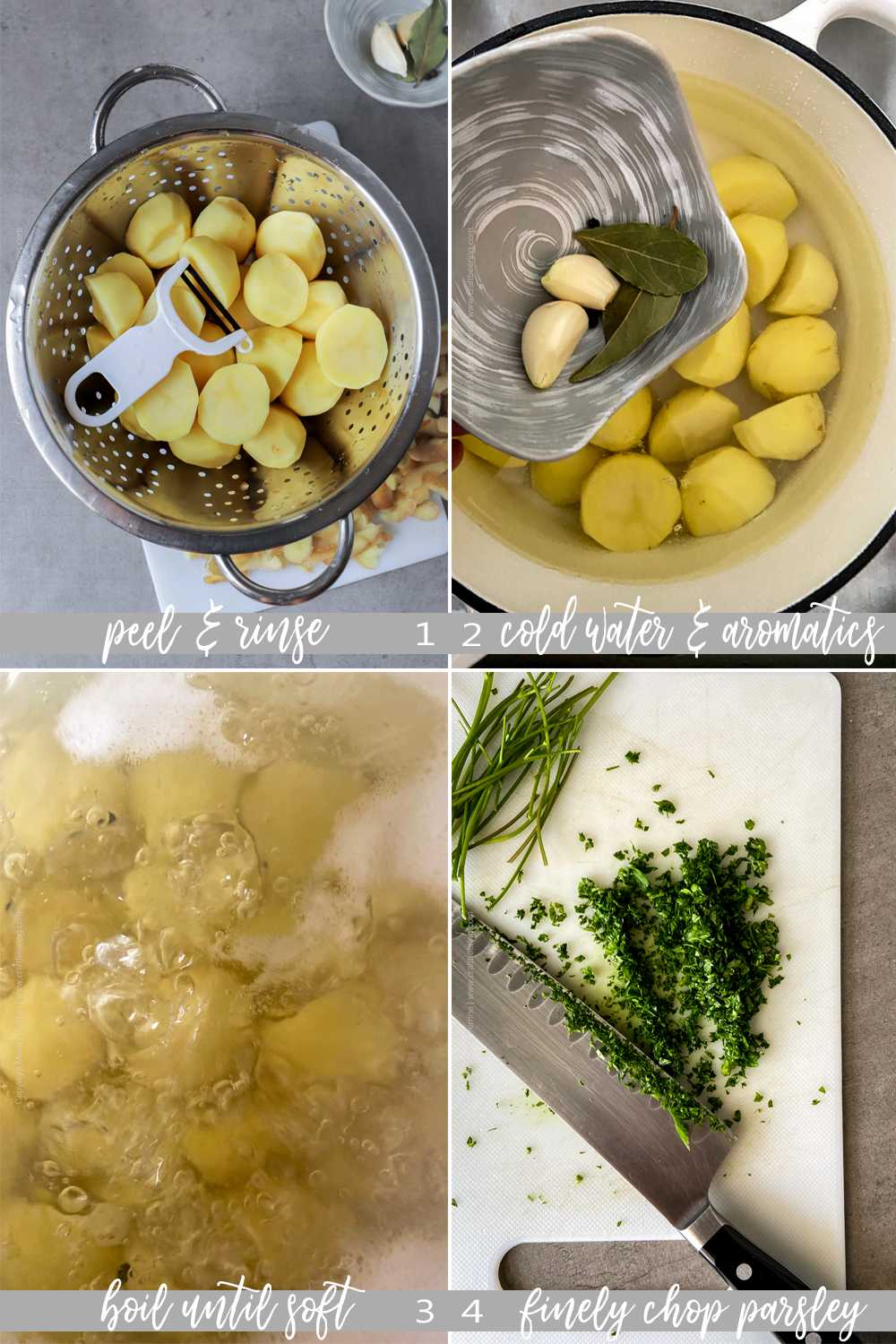 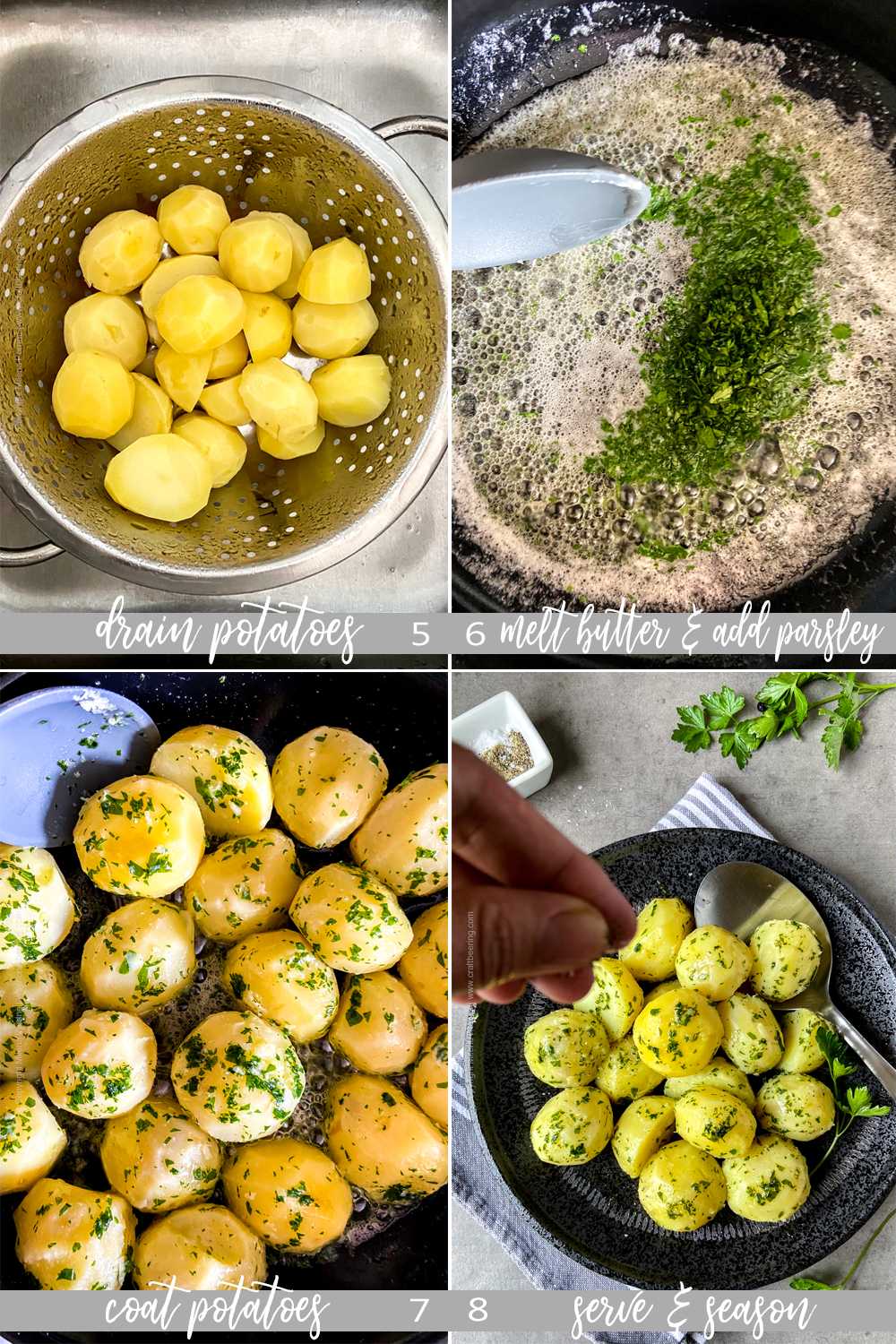 Prep. Peel and clean the potatoes. Cut any larger ones into halves or quarters. Ideally you want them all to be about the size of new potatoes or just a bit larger.

Boil. To boil the potatoes place them in a large pot and completely cover them with cold water. Add a teaspoon of salt and any aromatics you want to use and bring to boil. When done, drain and set aside for a minute. While the potatoes are boiling chop finely chop the parsley leaves (discard or freeze the stalks in a bag for when you make chicken broth).

Toss in butter. Melt the butter in a pan large enough to accomodate all the boiled potatoes. (Alternatively work in batches). Stir in the parsley, add the potatoes and gently move them around with a spoon until completly covered. Season with salt and pepper while still in the pan or transfer to a dish and season there.

TIP: Serve a small bowl of extra melted butter with chopped parsley alongside the potatoes – they can absorb a lot more than the small amount used to coat them and typically people enjoy drizzling some extra butter over their portion. 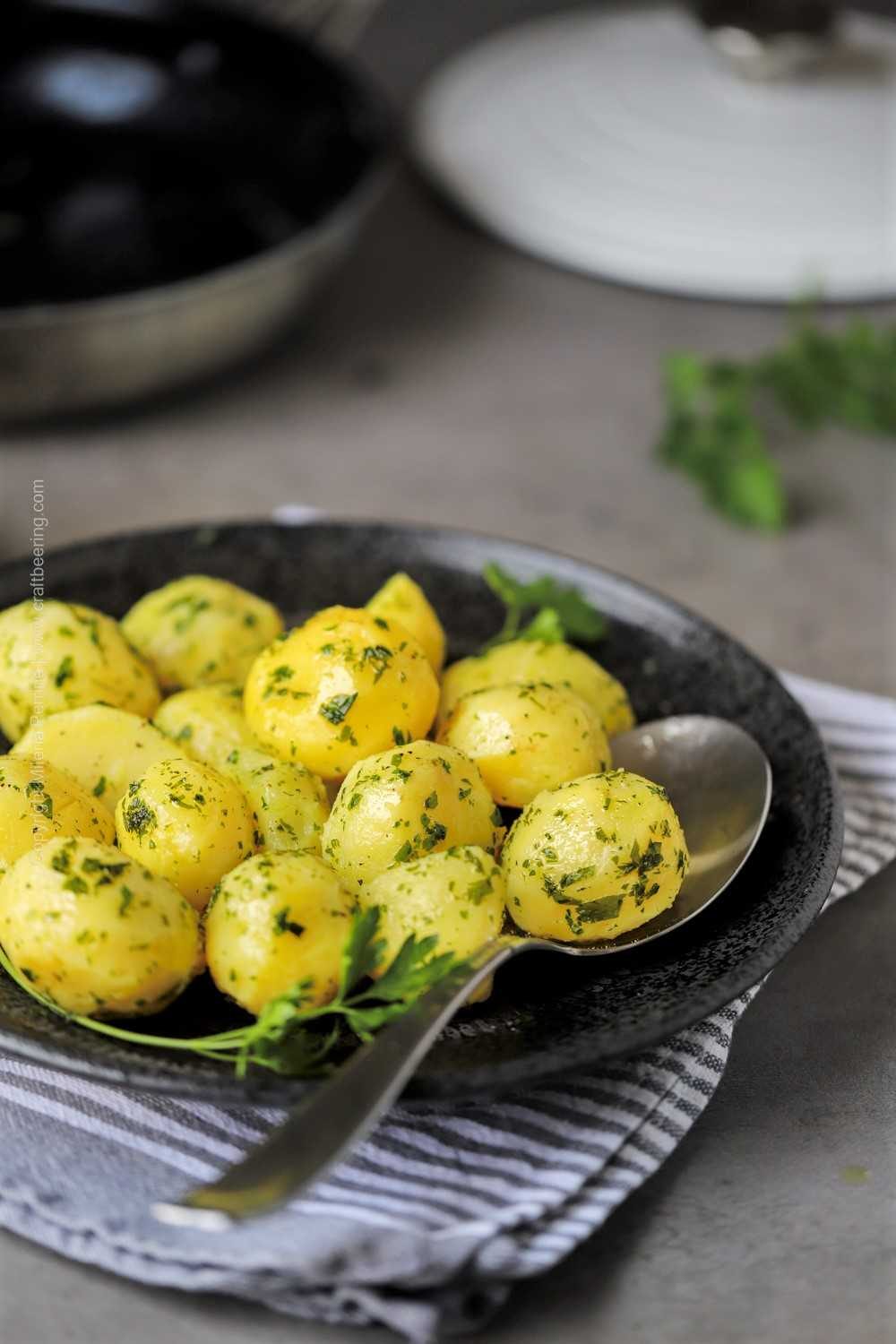 *Yukon gold or any of the other varieties suggested in the post such as fingerling, new potatoes, baby golds etc.

For butter lovers offer a small bowl of extra melted butter with parsley - present it alongside the potatoes so they may add a bit to their serving.

Be sure to read the post for additional tips.