How to cook orzotto – a creamy barley risotto with mushrooms, sage and thyme. 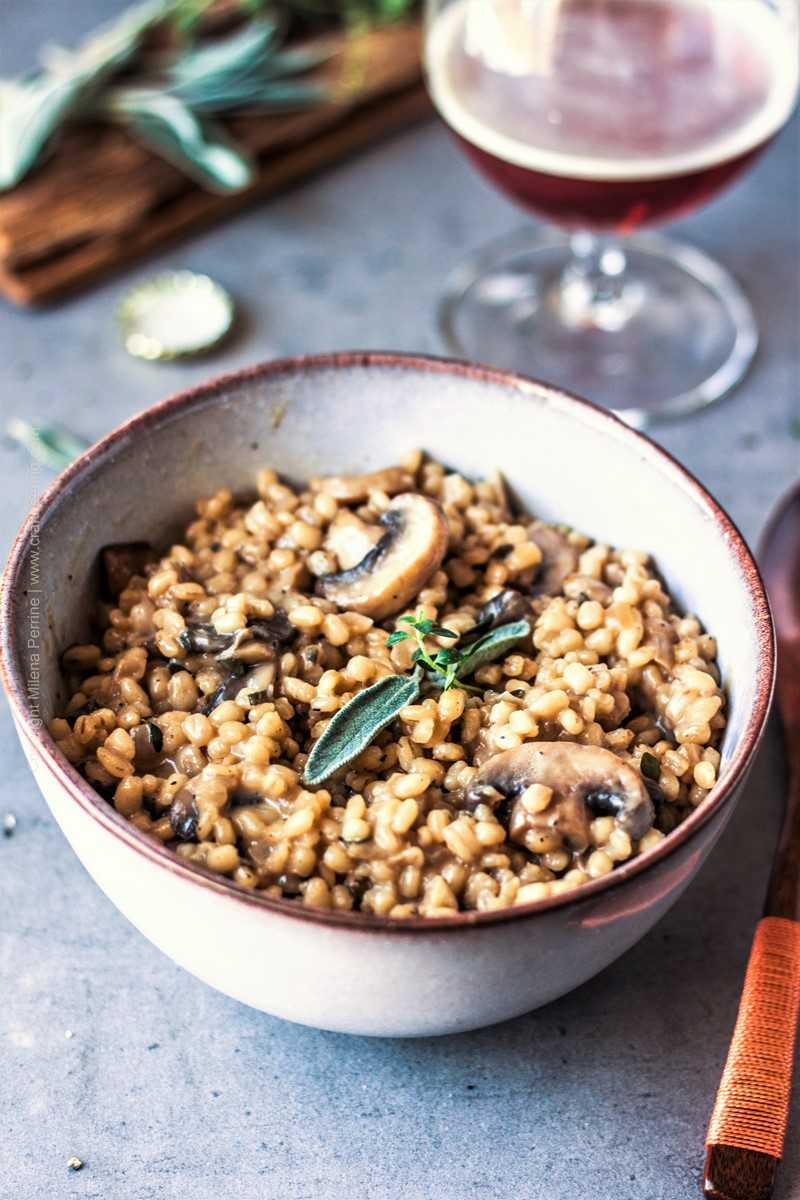 A handful of ingredients come together to create this hearty mushroom orzotto. A distinct, comforting flavor base and a slightly chewy, creamy texture make every bite a pleasure. We highly recommend that you stay as close as possible to the recipe.

Orzotto is pearled barley cooked in the style of risotto with plenty of broth to flavor it.

It is original to a region in the North of Italy known as Friuli Venezia Giulia with access to the Adriatic sea and borders with Austria and Slovenia. In Italian, the word orzo stands for barley. Blended with the word risotto it gives us orzotto.

Orzotto is most definitely not made with orzo, aka risoni, the popular rice-shaped pasta, as many online recipes misinform. 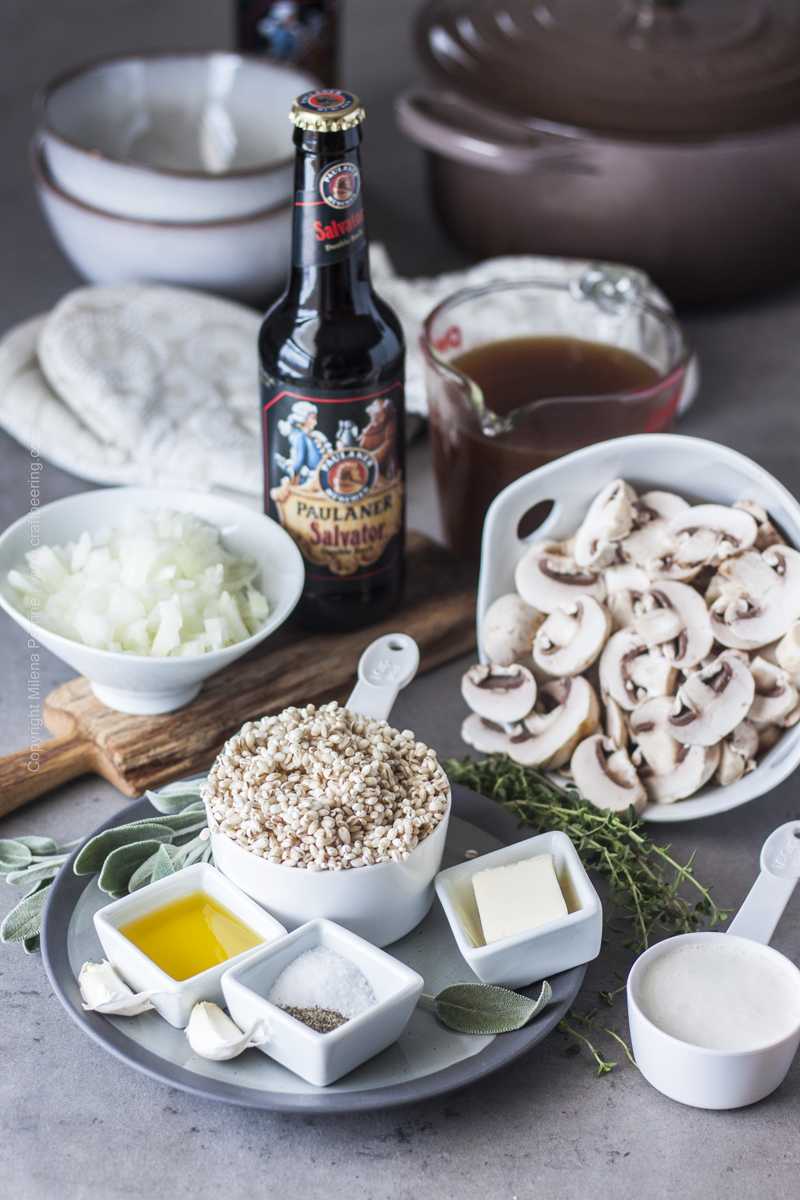 For this specific recipe we love to deglaze orzotto with malty, dark beer such as doppelbock lager. It lifts up the nutty, earthy flavors of the barley and the mushrooms and besides – it is a fermented malted barley beverage. 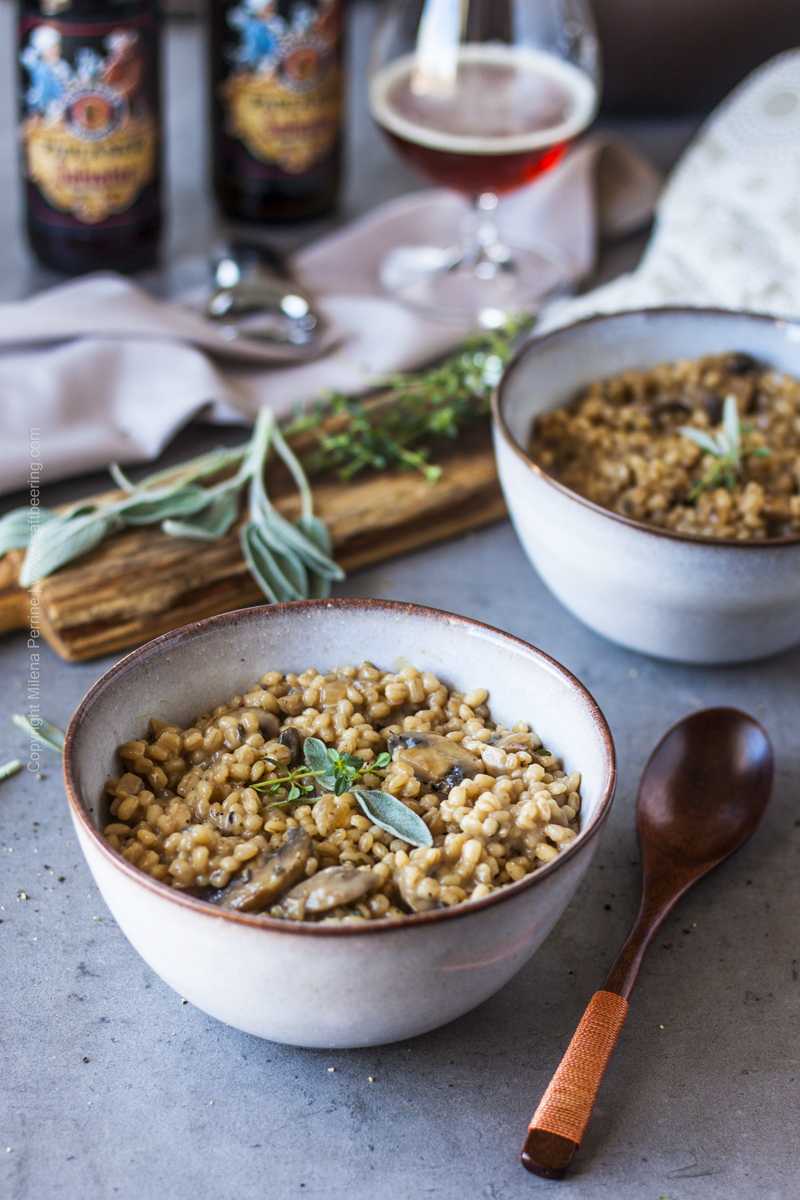 Beer vs Wine in Barley Risotto

Whereas a traditional arborio rice risotto and most versions of orzotto call for white wine as the deglazing liquid a mushroom barley risotto immensely benefits from the addition of a malty dark beer.

White wine is typically used in risottos because the acid it contains works to break down the grain starches faster which translates to a faster cooking time (especially true with rice, less so with barley). Besides being higher in alcohol wine is also much more acidic than beer so usually a small quantity is used to deglaze the base for a risotto.

Beer is made from malted barley grains and a dark malt centered style with toasty notes such as bock or doppelbock infuses the dish with complementary flavors and partners perfectly with the beef broth and mushrooms for a hearty orzotto. Plus – you can be more generous with the quantity of beer added (i.e. a more potent taste infusion).

TIP: Substitute beer or wine with beef stock as the deglazing liquid (there will be a depth of flavor loss).

Workflow – How to Cook Orzotto

The process of cooking mushroom orzotto entails cooking the barley and the mushrooms separately and combining them in the end.

Step 1. Begin by sauteing onion in olive oil until soft and then add the rinsed pearled barley. Let it cook for a couple of minutes to toast the grains nicely.

Step 2. Add salt, pepper, sage and minced garlic and stir to mix. Deglaze with the dark beer, add a bit extra and let cook for about a minute or two.

Step 3. Add the beef broth, stir, cover and let cook for about 25 minutes, until the barley absorbs most of the liquid.

NOTE: With barley risotto you do not need to add broth by the ladle while constantly stirring as is the case with arborio rice.

While the barley is cooking, turn your attention to the creamy mushrooms.

Step 4. In a skillet melt the butter and add the sliced mushrooms, thyme and salt and pepper. Saute until the mushrooms release most of their liquid, then add the cream.

Step 5. Let the mixture simmer for a few minutes and once the barley is nearly cooked (#6 picture above) fold in the creamy mushrooms. Stir, let cook uncovered until the orzotto thickens to your liking, then remove from the stove and serve.

Related: How to Cook Barley for hearty and nutritious barley salads.

Serve Orzotto as an Entree or a Side

Yield. This recipe yields enough to serve four as a side (great with skillet pork chops) or two as a main dish. You can easily double the quantities if needed. Leftovers freeze well – thaw refrigerated, overnight and warm up in a covered pot over medium heat, perhaps with a splash of cream stirred in.

Optional additions. Depending on your personal proclivity for butter consider folding a couple of tablespoons into the just cooked pot of mushroom orzotto.

You can also fold a half a cup of grated aged cheese into the dish or simply garnish each bowl with shavings of Parmigiano Reggiano or Pecorino Romano.

1. Heat a deep pot with a lid such as a Dutch oven over medium-high. Add olive oil and saute the diced onion until soft, about 4-5 minutes.

2. Add the rinsed pearled barley, stir well and toast in the pot for about 2 minutes.

3. Add the salt, pepper, sage, minced garlic and stir. Deglaze with the beer, stir and let cook for about 1-2 minutes.

4. Add the beef stock, stir, cover, lower the heat to medium-low and cook for about 30 minutes or until the liquids are mostly absorbed by the barley*. You can stir occasionally.

5. While the barley is cooking melt butter in a pan over medium heat and saute the sliced mushrooms seasoned with the thyme and a bit of salt and pepper. When their moisture is mostly released, add the cream and simmer to reduce a bit.

6. Fold in the creamy mushrooms into the pot with the barley. Stir to incorporate and if the consistency is still a bit soupy cook uncovered for a couple of minutes until the orzotto reaches your desired thickness.

* Your goal is for the barley grains to become tender but still slightly chewy.

You can fold in a bit of extra butter in the end or half a cup of grated aged cheese such as Parmigiano Reggiano or Pecorino Romano.

Garnish with fresh sage or thyme or both.